Preview: Chaos and Alchemy – prepare to get liquid 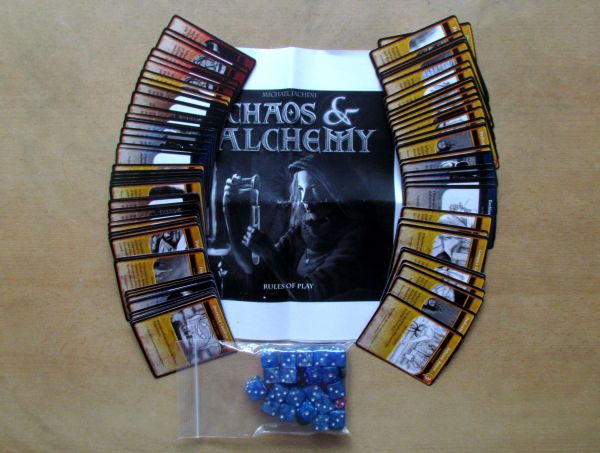 His eyes were not accustomed to daylight. He spent ten years underground in catacombs full of fumes and almost no oxygen. There were only two underground shafts with air and they were just really nice, but away from their laboratory. Time is precious in there and you will think twice, before you spend some while just standing around in breeze of air. Stanislav’s profession was also his mission. He tried to discover distillation mystery, that could give the world immortality.

Ten years of hard work, mixing various compounds and now he is finally holding a vial in his hands, which could be the right one. But in underground rumor begun to spread, he managed a spectacular discovery and he did not feel safe here. He escaped on the surface, therefore among ordinary people, who do not believe in such tales. Now he just has to find someone suitable, who drinks his liquid.. Are you going to be that person?

Immortality is one of many goals, which were previously discussed in alchemy. And it never succeeded. At least as far as we known, because such a terrifying secret was, is and will be carefully guarded. Even if someone discovered the elixir of eternal youth, he would not give it to common people, as it would cause chaos. 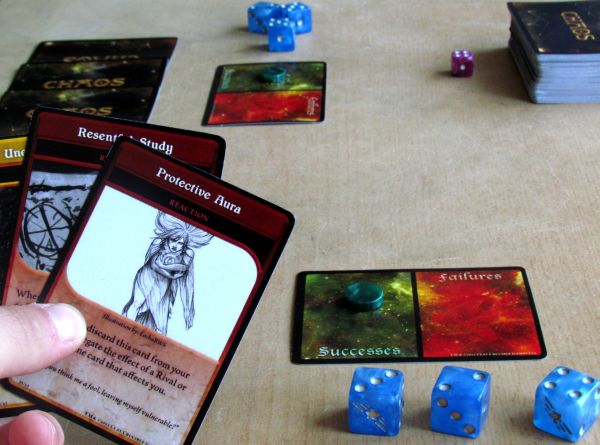 And around these two words – chaos and alchemy – card game of Michael Iachiniho is based, whose distribution assist Game Salute company. However, publishing company, which is game registered at, is called Clay Crucibele Games LLC. A single copy found due to the author’s willingness way into our hands as well.

A little surprise was, that Chaos and Alchemy came in no box, but its a first version, serving as a preview right now. A bag arrived full of cards, dice and fivepage rules. When it comes to ninety cards, there are 85 action for players and remaining 5 represents your laboratory with place to mark your alchemical successes and failures.

Only these few cards are oriented horizontally and split half into two rectangles – green for success and red for disappointment. When it comes to their rear side, you would not recognize them from other cards, which have on their back mysterious alchemy cloud with the word CHAOS.

The remaining game cards are divided into events (blue), reactions (red) and the largest deck with innovations (yellow). But there are also four black cards of misfortune. Most cards have dressed in addition to image only text describing its capabilities in several lines of text.Only innovation (and misfortune) cards contain a number representing victory points in upper right corner.

Packaging is then completed with twenty experiment dice, one tiny purple dice of fortune and five green tokens, that represent joyous success. All of these items together form dimensions, that would fit into a very small box. Instead, they are for now gasping for breath in a bag, but this is only a temporary situation. Right now, a campaing for this game runs on Kickstarter server to promote it and guarantee its release!

But back to Chaos and Alchemy. At its beginning, players take three experiment dice, one green token of success and one card of results, which is put ahead on the table. On the left side of your laboratory, you put a success inside green rectangle to guarantee you one action per turn. Card split into two rectangles represents your Laboratory – an empty room to fill up with inventions, that should help you on the path to fame and favor of the king. 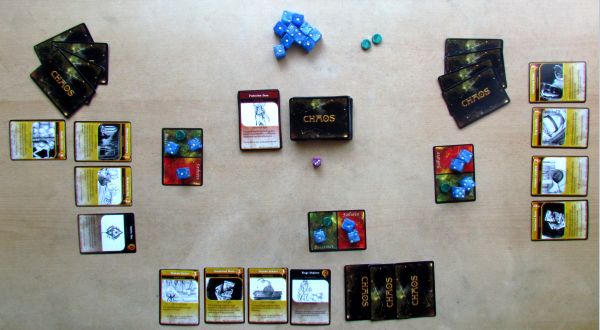 Now you need to specify a starting player, for example by throwing a trio of dice. Higher total wins. All opponents draw their starting cards from shuffled deck, which will form their equipment in the beginning. Starting player gets only two cards, the second and third three and a possible fourth and fifth player four cards as a compensation for the worse starting position. Alongside the deck, you place purple dice of fortune with number four up and alchemy battle can begin.

On his every turn, each player makes one experiment, and then passes the word to the next player in turn clockwise. Your attempt starts by rolling all your dice and comparing their values with number on fortune dice (at the beginning it is a four).

Every dice with outcome at least the same value as shown on purple dice counts as success and you can put it on the success part of your laboratory card. Other dice with lower numbers are moved to the opposite failure side. And what will you gain for them? Actions. 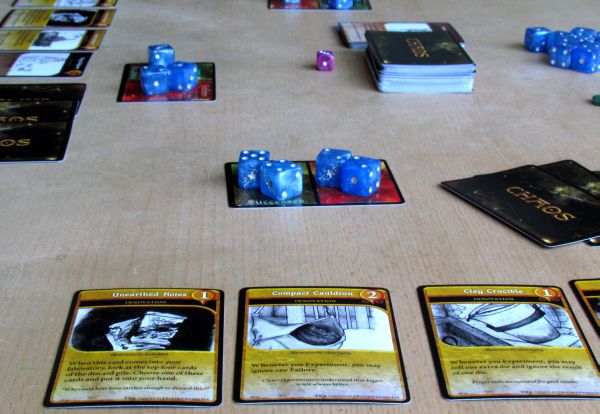 One action for turn is certain no matter, how much success you roll directly on the dice. This is done by a green token, whose action can be used even before you roll the dice. As you are working your way through your rolled actions, you gradually remove dice from the successful part to keep track, how many there are left.

So you can draw a new card from the deck or use any of the cards in your hand. Most of them are innovations, played ahead inside your laboratory and their skills can be used in future rounds in your favor. In addition, many of them have value in victory points, which brings you closer to victory.

In addition, you can have also cards with one-time effects in your hand – these cards immediately cause a change on the table. Attacking enemies is possible with misfortune cards, you put into enemy lab instead of yours. It is not easy to get rid of those cards and their conditions usually aggravate their unwanted owners or are lowering their victory points. Similarly, in works with rival cards. The last type is the response, which allows you to defend against any accidental attacks. 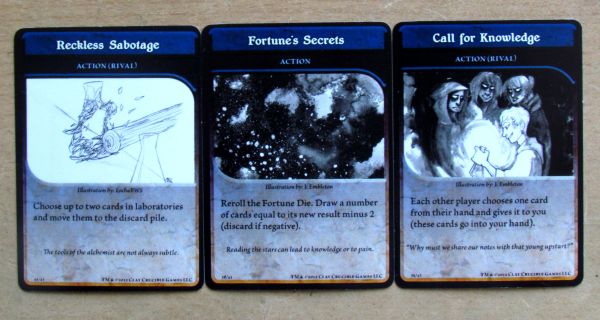 So we had talked about the alchemy. But where is that chaos from name of the game? Do not worry, you’ll get it. Chaos really happens, when you roll at least two equal numbers on your dice. You will then be honored with a chance to reroll fortune dice. You can compare your dice to the original number or new, this is only your decision.

Game ends, when a player accumulates ten or more victory points in his laboratory. That player becomes immediate favorite of the king and best alchemist in the castle. The others must go back to their labs and will have to try harder.

Chaos and Alchemy is a simple card game, that combines very nice unpredictability of dice with constancy of cards in hand and on the table. Together, it creates an interesting cocktail, you will really have fun with. Because this is a preview and not a real review, we will not consider the look of the game here, but only our first experience regarding gameplay (after only few plays). 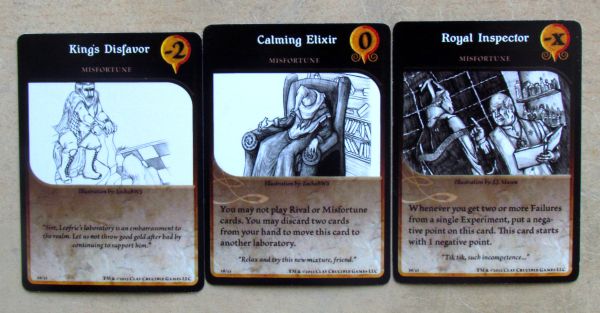 Game time is short, but you are still able to do a lot of things during a game. Fighting with cursed purple dice of fortune is only up to you, because everything depends on the ability to roll at least two same number. But to do this, you need as many dice as possible, which can be obtained from special skills of cards.

In the game, a lot depends of course on cards you draw. This is probably the greatest reserve, because often you will have bad luck. Starting game with a handful of actions, reactions and misfortune is really such a small tragedy, but this can be prevented by one permission to redraw new cards. The only comfort, when you have bad luck is fact, you can be sure, everything will be over in twenty minutes. Entertainment is not dependent on the number of players, at least based on few games we have played.

Due to the Kickstarter campaign, game and rules are constantly evolving. Unfortunately campaign itself applies only to the USA, reasons mentioned are too different costs of shipping across the world. Therefore, we in Europe can only make a direct pre-order at the Game Salute store. Now even without any remorse, because currently offered money are almost three times bigger, than required goal of $ 5,000. Game is expected to release in March 2014. 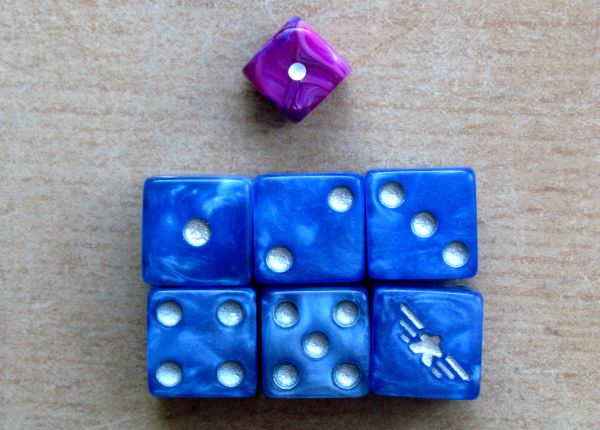 Chaos and Alchemy is worth only and only recommending to all players, who like simple, fast, and a little unpredictable game. The alchemists were after all a lot of fun cowboys of their time!

ITS PREVIEW, THEREFORE NO RATING WILL BE SCORED TODAY..