by Dušan on 24. 02. 2019
0
previous article
Review: Cerebria The Inside World –light against darkness, a duel of emotions
next article
Review: Das verfluchte Piratengold aka The Curse of Pirate Gold

Have you ever heard of Xobos? Probably not, because no one has come back yet. Until recently, it has been an undiscovered planet. Jaroslaw Bilinski entered into for the first time on behalf of mankind and because he was also a board game designer, he decided to create a game about his experience with the world of giant guards. He named it Guardians of Xobos and Radoslaw Jaszczuk enriched it with illustrations.

But most of this ís still the music of the future. Why? Because the game is only coming to Kickstarter these days and it will be trying to get support from fans with its campaign. This is the only way to get the release. And because we managed to get a sample (with virtually the final component quality), we could try it in several games and now report to you, whether the game is worth it.

Box is dominated by a set of big miniatures and above all a game board, that is placed in the center of the table. Each participant chooses color, gets a screen and his guardian figures. Together with big guardians, there will be also the little quarks standing on their base space on the board. Behind a hard paper screen, every rival puts a plate with bars to note statistics of individual guards, who all begin with six points of life and one point of strength. But one of them will be chosen as a leader, and he will have higher strength. His identity is secret information.

In order for each of the fighters to have their own stats, the guardians are distinguished with the help of tokens, that lie on their backs and serve as a mark or tattoo, that connects them to one quarter of the board. Players also have their own production board and building tokens under their control. The game board will then count the individual rounds and phases of the game. All other chips are put aside.

During the game, the stages of production and movement alternate. So players first move their pieces. While guards can slip only from one space to its neighbour on the web of paths, quarks are faster – enough to cover twice the distance. 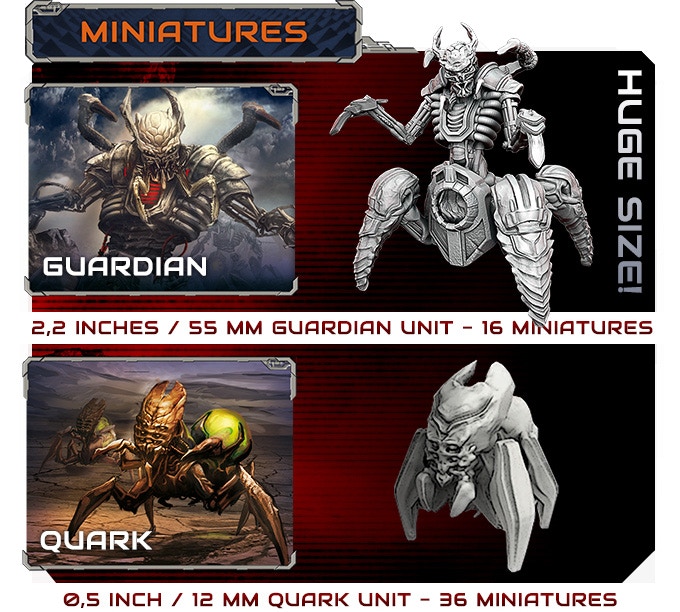 Gradually, the player can move in his turn with all the units, that are not busy building. Within the movement, all opponents can also announce attacks on enemy units in the adjacent position. In the fight, the one who has the greatest sum of power wins. For deciding the winnter, quarks always have value of one, while the danger of the guards increases with possible improvements made during the game.

Buildings on the board can be destroyed or occupied by opponents. And for such a success, they will receive an instant reward in the form of crystals. Such profits are always very important, because crystals are the ultimate payer. The one, that is exchanged for victory.

There is always a common production phase, in which players begin by gathering resources (one basic plus another bonus for eventually built mines), but also energy crystals. With the help of their fighters, players can also create buildings, indicating the decision by placing the token on the map position (where the building will be) and also on their board to incapacitate the guardian. He has to spend a cube of raw material for it. Only the next round will it be completed. With the help of buildings, players can improve their technology. In turn, there is also the opportunity to buy new units, whether quarks for one crystal or guard for five resources.

Individual guards have mental connections, that players can use, when the units are located on adjacent spaces on the map. This makes a strong enough connection. At this point, the heroes can heal or strengthen the other, albeit at the cost of not being able to do any action for the duration of the connection. Players can improve them with the help of the right technology and hence increase their strength or healing ability.

After fifteen rounds it’s over. At this point, the individual participants add up their energy crystals and join them with the number of guardians on the plan. But crucially, this sum is then multiplied by amount of bulit the reactors belonging to the player. The sum determines the winner.

This is a preview or you might call it first impressions. So we did not test the game as intensively as the review due to time reasons (Kickstarter is already running). While the usual procedure includes testing in several independent groups, this time we tried the game only in the editors’ office in two matches.

Guardians of Xobos, according to our first impressions, are an interesting and hopeful game with secret plans hidden behind your screen. But these tiny adjustments to tactics, the growing power of units and their mutual support are central theme to everything.

However, as a result, the positioning game with units is also much more important, as well as the proper creation of supporting buildings. Your opponent can not only destroy them, but also occupy and gain a very substantial advantage for further turns.

The overall impression is really positive. The game works as a skirmish fight with a pinch of building on it. In fact, you might think you are playing a much simplified RTS (real-time strategy).

Especially interesting are technological pieces. They gradually allow players to get access to important effects. These concern different buildings, such as the chance to build a watchtower. This is not possible (unlike other buildings) to occupy, enemy can only destroy it. However, players with the help of technology may be able to accelerate quarks, who can fight just like the guards.

There is quite a lot of constantly moving components in the game, which pretty much interferes with the overall smoothness. In addition, our games lasted quite a long time. You need more than an hour to finish and you should rather count with ninety minutes. It seems, that you will enjoy more fun with a higher number of players, ideally in four with all the corners of the plan.

Not all of the Guardians of Xobos experience is top notch, but it’s not over yet. There is only time for Kickstarter campaign, so further testing and debugging still has its space. But the game is sure to show the potential, that comes mainly from buildings. Guardians of Xobos is a sci-fi strategy with huge guard miniatures. But their monstrous bodies can not do anything without technologically advanced buildings. Finding the ideal synergy between building, fighting and upgrading will be up to you.