Preview: Heldentaufe – teeth, the most valuable thing on each monster 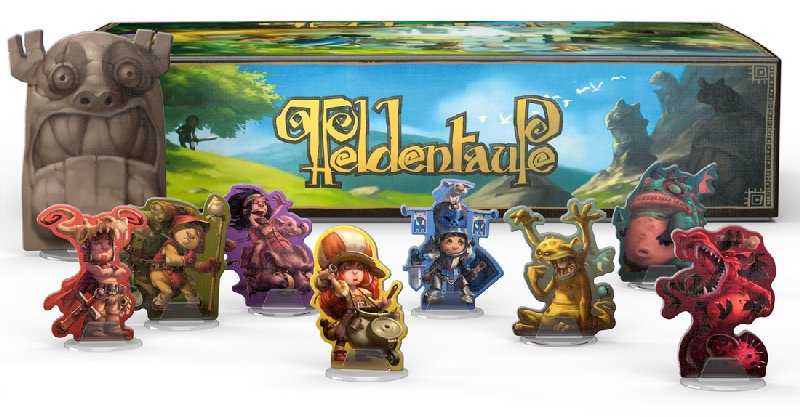 And we will (hopefully) enjoy one such adventure in board game Heldentaufe too. So far, we have only had the opportunity to peek under the hood of this creation, because this game is currently in development and its campaign on Kickstarter is now in progress. Author is Simon Junker and illustrations were created by Mathieu Leyssenne. From the preview version, however, we had the opportunity to taste all the important ingredients, so we have something to say about the game and how it plays. Campaign originates in Switzerland. Heldentaufe already was on Kickstarter once, but failed and was cancelled in progress. It is time for a second attempt, this time with all the parade and fanfares.

We already know, that players become heroes in this game. They will move around the world assembled from basic hexagonal pieces. Under the safe supervision of the Sun, they explore the world and can improve their statistics. Each hero has his own inventory and ability to upgrade offensive statistics. Spaces have different effects depending on the environment, that is currently surrounding a warrior. They await players as well as buildings, where can their weapons be improved.

Everything is payed for with action points. These are given at the beginning of the game, but each characters may be different (they have their own unique skills, that distinguishes them from others) and also can be improved in their usage. 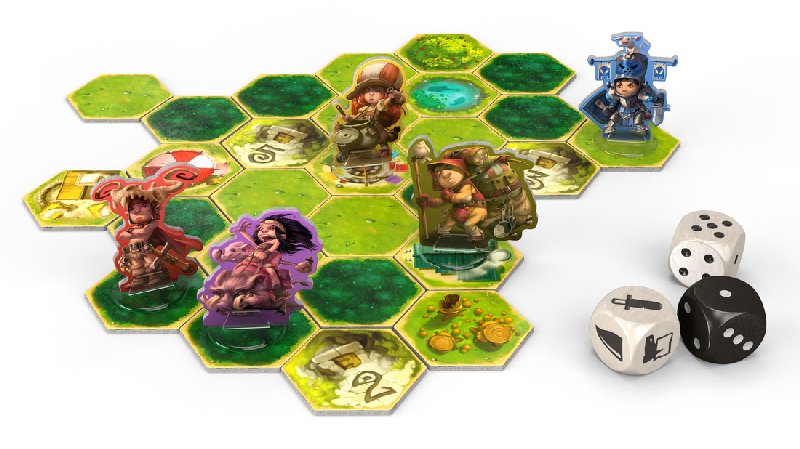 Some of the players must summon the courage to use discovered portal. This is, how he enters the underground. It has its own fixed board full of traps and treasures. Their position is changing every time, when no hero is inside. Otherwise, heroes are going through this murky place and may find not only treasures (by rolling dice), but also enemies.

Heroes can fight them using dice. And its the only way to get the most valuable thing every hero longs for – defeated monsters tooth. To do this, all they need is a bit of luck and attack by rolling the dice successfully few times. However, monsters are controlled by other players – those, who are at the moment safely above, under open sky. Warriors can attack also each other, so they lose health or steal already captured teeth.

Players also have their secret missions. Cards, which can provide another tooth for completing them, so there is no need to defeat so many monsters. This is good, because underground creatures get fiercer and stronger with every defeat. Only when one of the heroes managed to accumulate enough teeth (determined by number of players), it is time to end the game and celebrate victory of one of players. 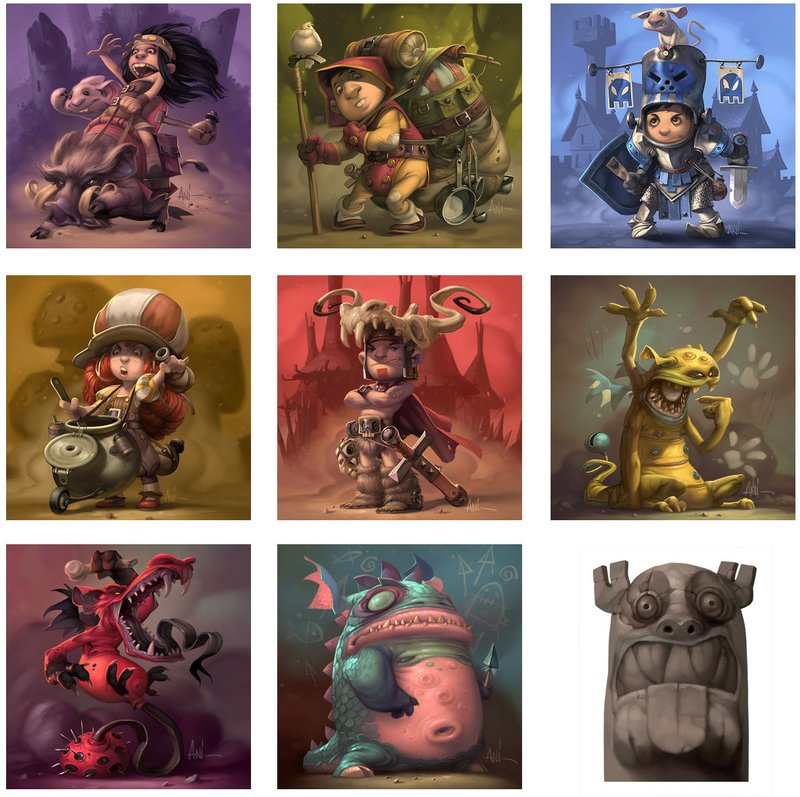 Heldentaufe is a magical game. It has everything, such a heroic adventure should have – monsters, fighting, luck, tension and improvement of heroes. Everything nicely fits together and in addition is taking place in two worlds.

But what is special? First of all it is linking those two worlds. However, only when players come down, they determine moment, when monsters get to move. It will always be after turn of that hero, who descended first into the darkness. To mark this, there is also a monster token, that this player lays down to his right hand.

Even more interesting element is, that several players must often agree on monster movement. On the one hand, it is possible to truly consult and choose the best option, on the other they must all reach a consensus. Otherwise, one of the players underground gets a chance to move the monster. 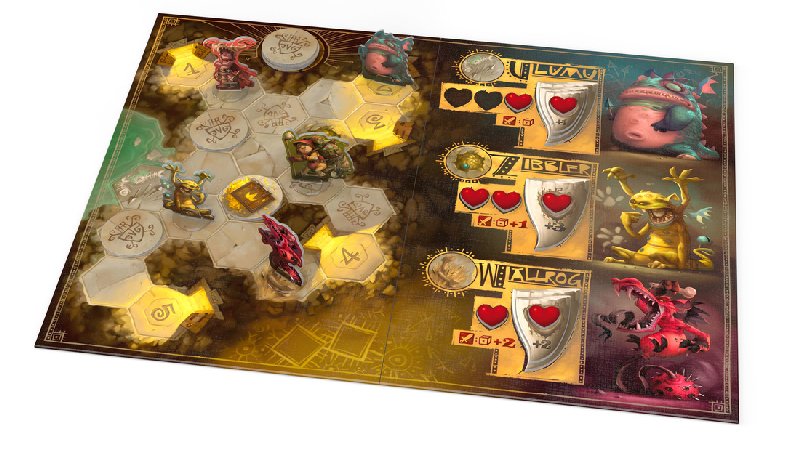 Another attraction is constantly changing underground. Whenever heroes are not looking, someone moves the traps and treasures to other sites. And because heroes are blocking each other inside the cave and there may not be more than one on one space, you often have to take risks and try to pass through an unexplored space, despite chance of encountering a trap.

Monsters become stronger and therefore tougher to defeat. Heroes can not die. They only lose all their improvements on the card and most likely also chance of winning. However, they will still be able to participate in the game.

The game is quite long and standard match regularly exceeds an hour and will be approaching ninety minutes. Number of players is dealt with by number of target teeth, so the result is the length of combat is not significantly different. But four players mean, that you’ll be always waiting for some time for your next turn, if you play with full number.

Campaign will go live on 13th February. We will add link, when it does. 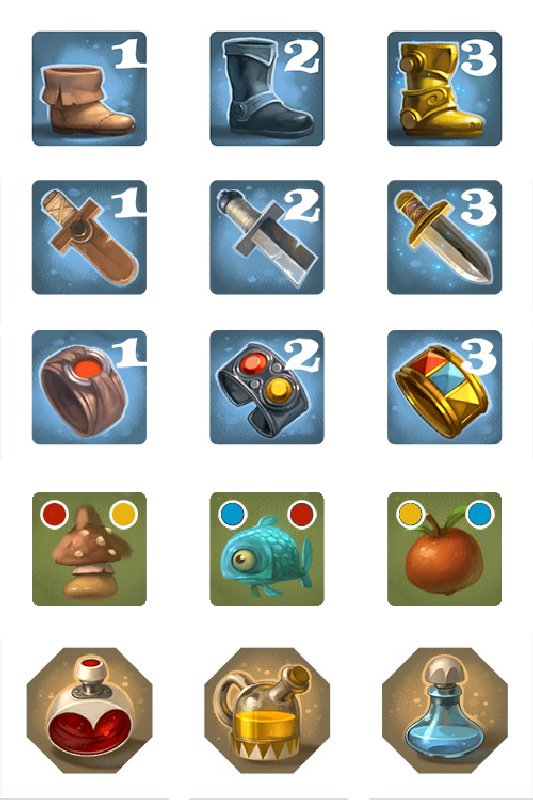 It can also clearly be seen already from our prototype , that the game will look absolutely gorgeous in production copy. Illustrations and everything breathes out the true story. You would hardly say, that thsi is a game in fact only looking for support for the release on Kickstarter. This is practically a finished product ready for release.

It makes no sense to conceal, that we really like Heldentaufe. Even you could say, that we are excited about it. This is definitely one of the best Kickstarter prototypes, we had a chance to test. And now we can truly see, that thsi might be a damn good game. We wish it the best luck. And you! Go and support it, just like we did!

by Dušan on 05. 11. 2018
The Vikings are really wild and unrestrained guys. There is no doubt about that. When you put a hammer and a beer together, you can get real [...]
Comments
Leave a reply