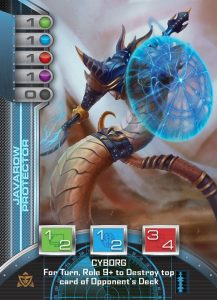 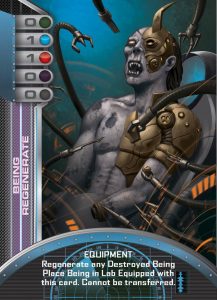 We have always thought, that knowledge of the universe would lead to tranquitily and peace; we could not have been more distant from the truth. Unfortunately, just discovery of the latest secrets meant, that humanity’s attention was diverted to something else. Towards making weapons, mutations and waging wars. In this world, now there is not one, but three types of fighting, that are interwoven and creating a mess called Psi Wars.

Michael Wohl secretly crafted this game with his son. Together, they created a science fiction world, they would like to bring to fans all over the world. This is a game that is collect support on Kickstarter server throughout May 2018.

Each player must have his deck of cards. That equals to box itself. We’ll stop here for a while, because Psi Wars are a collectible game, but without any randomness – you know, what content are you buying. To begin with, you will have a total of 54 cards, that are the same in all starter boxes. With the success of the game, however, new card additions (and as part of the campaign’s expanding goals) will be introduced. With them, there will be more chances to build your own packages.

Players always shuffle their cards before the game, draw top eight cards into their hand and prepare for a duel. In addition, the player will also need a battle table (matrix), that is made of hard paper and shares the space in every box.

In the game, the players alternate and each gets their chance to make a turn. It always starts with the opportunity to build one of four types of creation units. In his possession, however, the player may have more of these cards of the same type, all built and visibly distributed in front of him on the table.

It is with these buildings, that players can create new combat units for their ranks, but also build other types of cards. Just pay the price and exploit (rotate) one or more building cards temporarily. The price of cards from hand is indicated by colored dots in the upper left corner, where stronger cyborg can demand calmly all four types or less. It all depends on card power. And while fighters are played exhausted and have to gain strength before player can use them for the first time, action cards can be used instantly. From their hand, players can also put their equipment cards on them. 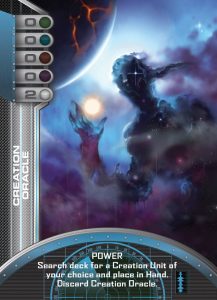 Once ready, they may choose to enter combat phase. Player can then choose any set of his free units and attack opponent, either individually or in a pair. The defender can respond, report up to two defenders and prepare them for battle. Combat takes place in three phases – cybernetic, psionic and physical. An attacker can choose order of the first two phases.

Because each unit has specific capabilities in each area, battles often behave as waves. But the decision does not depend solely on the comparison of numbers. The offensive and defensive numbers are only coordinates according to which players will find one value in battle matrix. This is the number, that an attacker must now roll as a sum of two six-sided dice. Only if he can at least equal this request, his attack was successful. This means that the attacking strength passes and can injure or destroy the opponent’s units. However, if the defense is completely missing, wound penetrates towards the player base. It has a determined number of lives from the beginning and the destruction of the opponent is the ultimate task of all rivals.

Psi Wars is a dueling game in which its simply all about conflict. From the beginning to the end, the player build army or attack each other, when they thinks their opponent is vulnerable the most. But whatever you do to prepare yourself, just like in a real fight, you may be surprised by luck in here too. 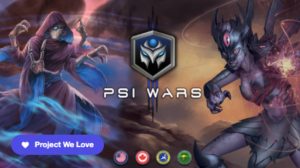 But that’s not the classic bad luck, when your opponent just rolls more than you did. If you have a good defense, then you have a very good chance of blocking the attack without losing your life. But there is always a chance, that the attacker will be too determined to penetrate even the best defense. Therefore, a matrix enters the game with very well-spaced points.

It’s the way battle happens, which we like the most. Its not just a single round, but there are three in order. And they will all hapen. There is the same number of matches between the characters in the Game of Thrones and we enjoyed it very much. There, however, players themselves voted for the one of three contests to make. In this game, they always go through all of them, fortunately they are all fast in execution. But that means, it is impossible to rely solely on brutal strength or just on one statistic. An attacker must count with all three digits, that have the potential to affect the outcome of the battle.

Rest of the game is just about setup for a fight – building a resource machine. Players need a handful of cards, because they can be influenced by just loading equipment. Each unit can have one item to help him with its statistics or capabilities.

But even construction of resource engine is not self-evident. First of all, it takes a while before the battle machines of both players start to ride, and you can not afford the strong units at the beginning. But it has a great development, and it’s culminating just in time.

Unfortunately, crawling of such a number of battles in (practically) every round is a lot of scoring, counting and rolling dice, that players must complete. And it kind of disturbs the otherwise extraordinary simplicity of all the fun. There may be two players , but even more. Here comes the choice of enemy for battle and correct defense strategy is even more important.

The gameplay looks great. Illustrations on the cards are gorgeous well bound with the theme of the game. In addition to basic classic cards, special unique will also be available in decks, which look even better. 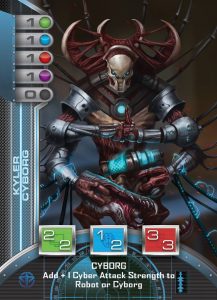 Psi Wars is a game, that made us happy and its even not finished yet. It offers a great combat systém with challenge and unexpected turnovers. And it is precisely this, why should you go and support this card game. Psi Wars should be able to get your attention and become next star in the sky of collector card games.

by Dušan on 07. 08. 2019
We thought gold was ours. We rejoiced foolishly and did not watch the sea. None of us saw, when the surface began to boil and tentacles began to flicker [...]
comments
Leave a reply