France. A country, that was full of magic and unknown just a few centuries ago. It was inhabited by demons and angels. And these moments will be our world in creation of authors Michal Golebiowski and Filip Milunski. The world of Time of Legends: Joan of Arc. Game, that turned Kickstarter upside down some time ago. And now its publisher, Mythic Games, has joined forces with Lucky Duck Games (Chronicles of Crime) to bring something new and fresh to our tables again. Will it succeed? Let’s see.

And from their cooperation, a new game called Time of Legends: Destinies was created. This is a novelty and Lucky Duck have sent us a demo copy with one story. And now it’s time for you to know, if we thing it’s worth to support the game on its Kickstarter campaign, which is just starting out.

Destinies is a game, where a mobile app is an integral part. And this is related to the whole gameplay setup. Players only choose one of their heroes (from three available in the demo). Player gets character’s board, a set of dice and one fate card. It comes with a portrait on the front, but there is written the secret goal of this hero on the back, which can lead to victory in the game. From the beginning, players have a little idea, what they will have to do in the game world to achieve this goal.

All other components are dealt based on the program decisions, among players and on the table. It is not only the initial layout of the map cards, of which only one will be revealed, the other facing the back and thus without the necessary details. It acts as a fog of warar. The central tile, where players will start with their miniatures, will be populated with several NPCs or tokens of interest at the same time.

However, important setup concerns mainly heroes and their statistics. As soon as the players select the characters to take part in the adventure (they will also have to choose scenario in the full version), they will be given the prescribed positions for success tokens. There are three scales on the hero’s board – strength, agility and intelligence. And each of them can be filled with several wooden markers. In the case of the right roll, each on the line can mean one success. 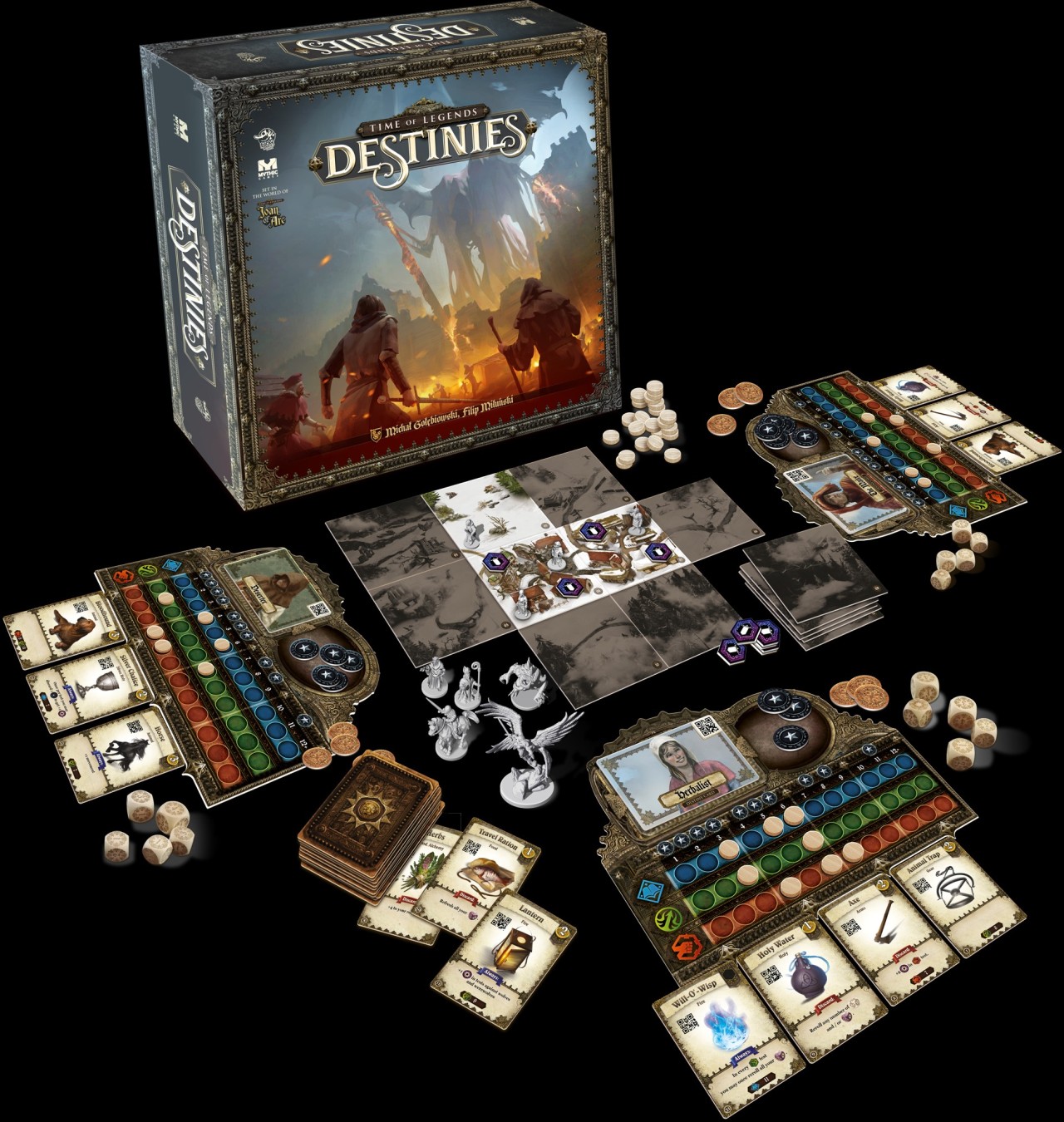 Players will place their miniatures on the starting location and then the app will name the one, who will start the game. A map also appears on the device display. If an active participant decides to move around the map to an undiscovered territory (at the beginning, every territory except the starting area is covered in mist), he must first mark it in the application and based on its instructions, fill tile with points of interest and non-playing characters.

However, movment is optional activity in the turn. The only real obligation and element of each round is the interaction with hero surroundings. The player selects a point of interest in the app, touches it, and all the options currently available appear in front of him. These usually lead to some choice or test of one of the three abilities.

The latter is much more uncertain. Each test requires a pair of basic dice to be rolled. Their result can be altered with any number of the three effort dice. The total sum of values then corresponds to the position on the ability scale. All the dots in place with this number and in all the places to the left of it mean success. This number currently has to be entered into the app and all that without any help in advance, whether or not will it succeed.

This is also the moment, that sets the game apart from all similar dice adventures. Players do not know the difficulty in advance and it can be variable. Depending on the level of success, there can be none, small or really big reward for the hero. And often, players have only one attempt to do so, because the object of interest can then disappear immediately.

The dice of effort are exhausted after use. And if more tests are needed in the turn, players have to handle their options with extreme caution. At the beginning of each turn, only one of them returns back to possession, so any use of a higher amount of effort means weakening for the next turn. 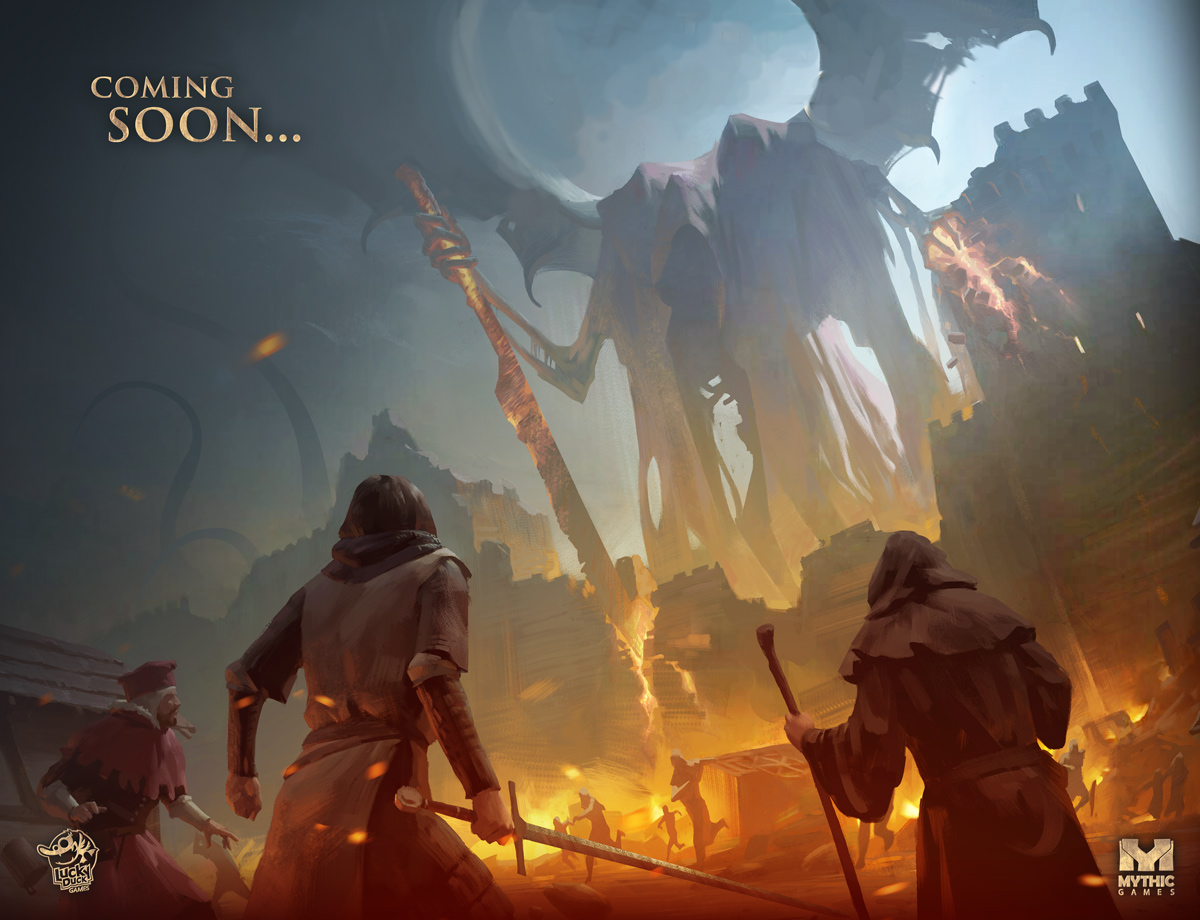 However, because they are mostly characters or buildings, they are here and waiting for other visitors. All text from the app is public, so others have the information they need. It needs to be read out loud, but in the final version, everything should have voiceover. Players are gradually unlocking the world together. It is developing and with it the possibility of individual locations changing.

In addition to the aforementioned tests, there is also the possibility to buy items or ask questions. For this purpose, each item card there contains a QR code symbol, that can be loaded into the application at that particular moment to learn the character’s response.

For a successful solution, players often get an experience token or a coin, for which they can buy items in stores on the map. They bring new pips to abilities or directly offer specific skills. With experience tokens, players can improve their scales to get more success points.

Compared to other Kickstarter test samples from the past, we felt that we were playing a practically finished product. Maybe it was because of the narrative nature of the game, which then looks much more compact. However, this does not change our enthusiastic impressions, which we will now convey to you on the following lines.

The whole game is interesting mainly because you never know, what is waiting for you, anywhere you visit. Even if someone was there, even if you were there yourself. The world is changing and it is really alive. But it is important to pay close attention to what the characters say. Often there is a task, wish, or hint in their words, that can guide you towards something intersting. By closely following orders, you will avoid a certain deaf spot in the middle of the game, when you have discovered the whole map, but now you need to find out, what and where to solve.

Maybe we haven’t really emphasized the fact, that Destinies is a competitive game. Players may have some goals in common, but in the end only one wins. The one, who completes first, what is written on the destiny card. And the first one to do it will celebrate victory in the scenario.

Adventure is full of stories. Lots of texts sit together and the world is inhabited. Players always have a lot to do, because each site usually contains more than one point of interest, and the discovery will intrigue everyone. Initial decision and choice of routes on the map, however, does not seem to affect the final result, because it is always possible to find something else and interesting in every part of the map. This is also an example of quality game design.

Success is decided by the dice, but it is up to the players to limit this influence. And not only by upgrading hero. Individual items also add tokens to the scales and are perhaps even more important, than experience growth alone. We do not yet know, how interconnected the individual scenarios in the game will be, but according to the authors, they will tell a common story.

The test scenario was quite long. It took us over two hours to complete and we had a great time all the time. And the final moments to decide the winner were quite hectic and interesting. It was really close with only few turns away from victory for the second player.

Already from this test story it is clear, that you will not play it again. You know all the secrets and there is no point in exploring again. Therefore, the number of scenarios in the campaign is finite. But only temporarily, because the authors have already promised to release an editor to allow the community to create their own scenarios with existing components.

Time of Legends: Destinies is a game, that we would like to support on Kickstarter without hesitation on the first day. The introductory version convinced us without any doubt, that this will be a game, that will rewrite the history of mobile app and board game integration. It is a true adventure RPG full of dialogues, hero upgrades and constant discovery of something new. Time of Legends: Destinies has tremendous potential and we want to be there, when it turns into reality. And what about you?

by Dušan on 21. 11. 2018
I have joined them as a nineteen-year-old, landless man. I dreamed of exploring the universe and becoming rich. But I made promises, that could not be [...]
Comments
Leave a reply