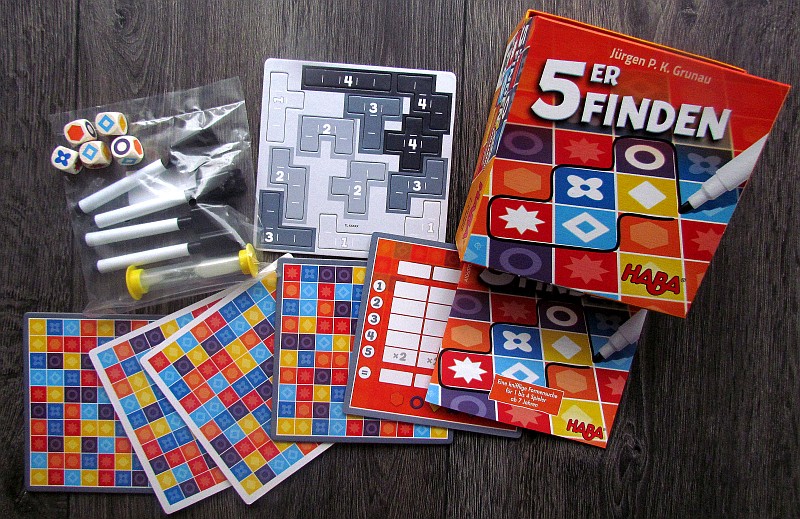 It’s just a number. I keep saying that, even though I’m holding a half-yearly report card in my hand. And yet I don’t want to go home because my parents will be sad. I have no idea how it happened and I am determined to fight and fix everything in the second part of the school year. And then I remember that there are others, who even collect fives.

It is the collection of this number, that will be the goal of all players in the tiny game 5er Finden, which was prepared for us by Jürgen P. K. Grunau. This is a novelty that HABA brought to the release and introduced it as one of its games for 2019. The illustrations for the game were created by Oliver Freudenreich.

Surprisingly, the new box does not have a yellow coat. Instead, it offers a set of colored erasable pads, four of which appear directly in the hands of players. They lay the plate in front of them, all on the same side. Players will also receive basic equipment in the form of markers. They will write their names on the last, common board, where the score will be monitored. In the middle of the table, there is place for a set of five dice and especially pieces of different shapes, which are always composed of five squares (hence the name of the game). 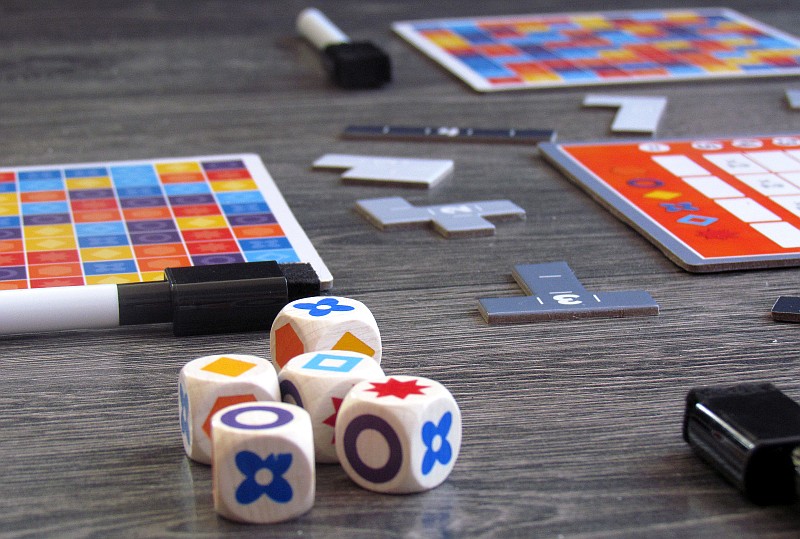 The whole game is ruled by fives. And this also applies to the fact that the game stretches over five rounds. At the beginning of each of them, one of the participants is commissioned and rolls a set of dice, and they all look closely at the symbols that result. But this may not be the end result, because if three or more of the same icons have been rolled, then the player must roll all the dice again.

Players try to find these symbols on their board so that they are always combined into one of the allowed point shapes. These are indicated with the help of pieces, that lie in the middle. These are all possible assemblies into which four squares can be connected. However, the individual shapes also have a different value for the final point outcome. 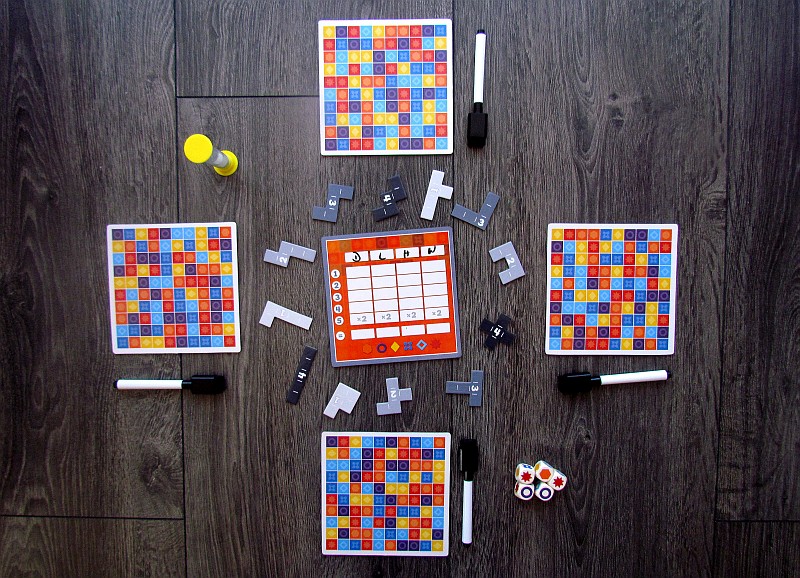 Players do not take pieces from the table, but instead use a felt-tip pen to frame the shape they found on their board. In doing so, they can use each shape only once and must never overlap. When searching, you can rotate tiles in any imagination, but the player can never search for more than five shapes.

At any time, one of the participants can turn the hourglass and start the countdown towards the end of the round. After that, all opponents will record their correctly marked shapes and the one who finished the round will add one point to their values. The wheels simply repeat each time with the board erased and the new dice symbols rolled. After five rounds, all opponents add up their profits and compare the amounts. The one who has the most points in total becomes the winner. 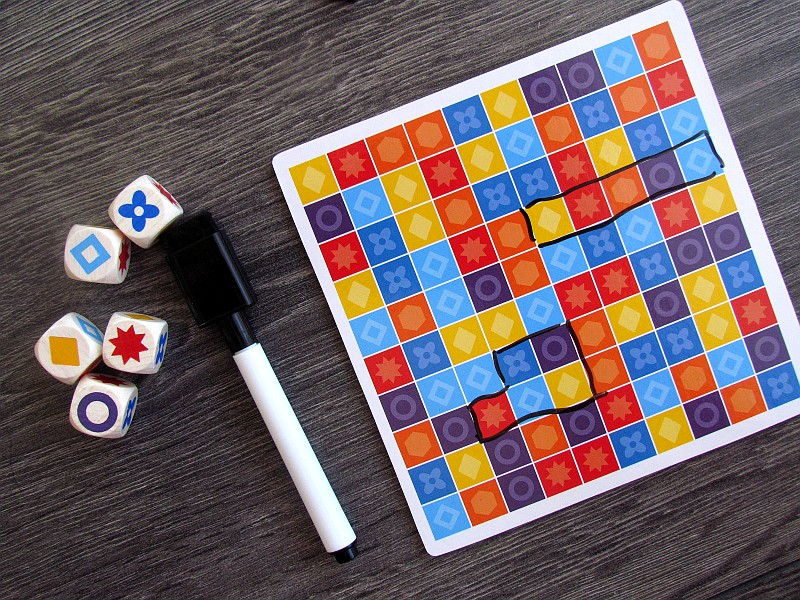 5er Finden gives players a pen and lets them scribble, but it’s mainly about speed and a careful eye. Only in this way can they be the first to reveal a suitable combination in the clutter of icons on their game boards.

But while hope of speed would encourage you to look for the simplest shape, everything is a little different. Shapes differ in point value and everything happens under time pressure. That’s why the fight itself is really wonderfully fast, especially when the players themselves announce the end. That is, unless you play in a team of perfectionists who always try to find all five shapes. But that would be meaningless, because it is about measuring forces. So even proper announcement of the end is an important part. 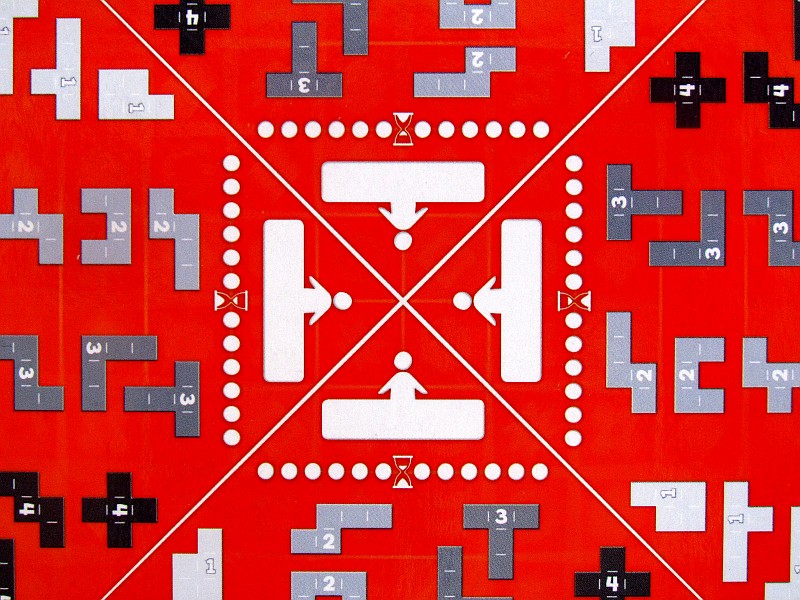 It’s all simple and just about scribbling with markers. And you will love this simplicity in the game, because you will easily enjoy the search for symbols. The game is suitable not only for families, but also for more advanced players just as a relaxation. In fact, you don’t have to think extremely about the gameplay elements, you just make the right decisions for the right shapes at the right time.

But it is drawing that is the moment, which distinguishes the game from other competitors and gives children and players something more. They don’t just have to quickly grab some objects or slap their hands on the cards, but instead they can actually create something. And drawing alone, even if only a few lines span a few squares, is an important skill. 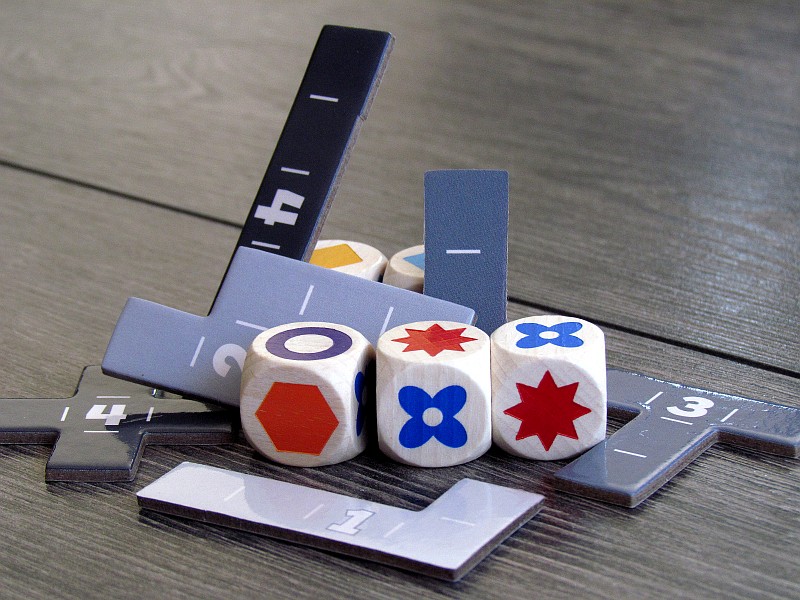 5er Finden is a nice observation game, that offers something extra that others do not have. It lets you draw for speed and makes it elegant and simple. Thanks to that, he can have great fun and, together with the time limit, it won’t let you breathe out for a while. So if you have games, where speed is main thing, then 5er Finden is a great candidate.

5er Finden is a game, in which players try to find a set of symbols on their boards, which are full of clutter of icons. The shapes are different and with them the possibilities of combinations are rich. It takes a quick eye, but also a steady hand. It's not enough to just find the pictures. The player must also circle them with the help of a marker. Thanks to this, 5er Finden is a relatively unique game and an excellent filler not only for small but also grown players.