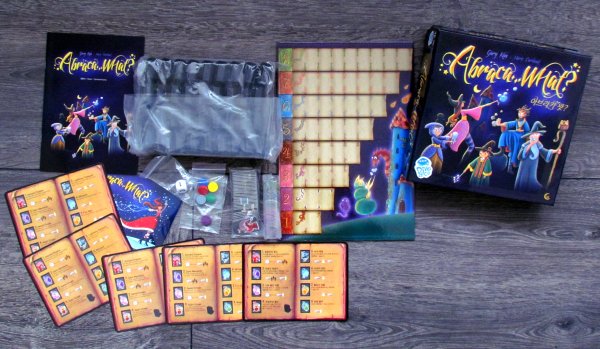 I look around my company, saying hi. I get only one reply. I know now, that this is not an ideal group. A lisping magician and other with a trembling hand, that magical stick falls to the ground with every move. This will not be easy. Our attack on the tower is coming and I am more worried about my own safety. I hope not to get hit by fireball from my own ranks. This will not end well..

We were lucky and got one of copies of board game Abraca.. what ?, which easily sold out at the fair Spiel 2014 in Essen. This is only first of a series of great news for Gary Kim, author of the game and also its publisher Korea Boardgames. Other, bigger news is, that Z-Man Games announced at end of February to publish the game under their own flag with a slightly altered title Abracada.. what? Fortunately illustration made by Marie Cardouat are not subject to change.

And no wonder, because it radiates playfulness from lid to all sides. A small square box is jinxed and it is not easy to get into its interior to see everything inside. But finally, you succeed. First up are rules, and beneath them are briefing cards, that list all available spells. 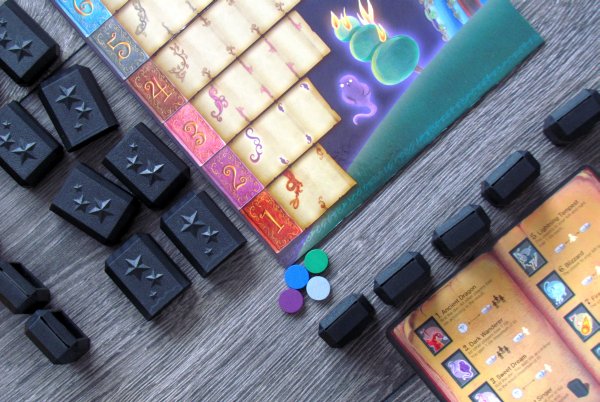 On the floor below lies common game board featuring a pyramid turned upside-down. Eight lines with an increasing number of positions (from two to nine) with picture of a tower guarded by a curious dragon. And then, you find one of the charms of this game: pile of 36 stones. Plastic stands, in which you have to insert tiles with pictures before the first game. Only then are spells completed and ready to be část. Each has number from one to eight (matching by color rows of inverted tower).

Along with the board and spells, there are also round life tokens in cardboard sheet, six for each of the five mages. Game also includes a white dice and five wooden tokens for players to monitor their advance.

At the beginning of the game, each player chooses single wizard. Five cardboard life tokens become his property, together with wooden stone and help card. Wooden counters are placed under tower and then every player gets five random magical stones. But! He may not look at them under no circumstances. Instead, stones are placed with their picture side facing his opponents. 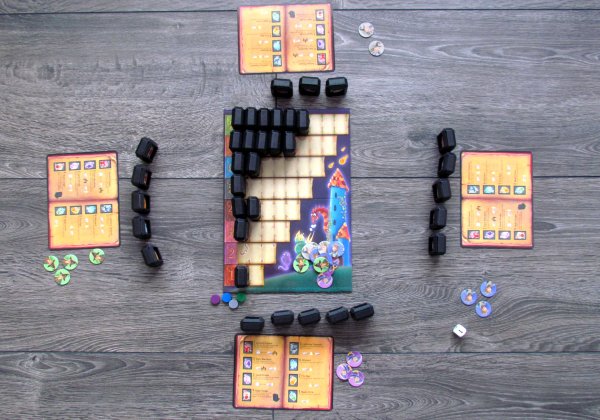 Four other stones are placed face down in corner of the board as hidden. These are secret spells, whose identity is also hidden to everyone. Part of the remaining spells are placed on the board (with smaller number of players) and rest creates supply next to the board, face down. Each spell corresponds to number on certain floor of the tower and this number accordingly determines also amount of spells of that type in entire game.

On his turn, each player may try to conjure up spell of his magic book. But he does not know exactly, which spells has he available, so he must simply guess based on informations from stones of other players. He shouts name of the spell and other players tell him, if he was successful in casting it. Otherwise, his turn immediately ends and such abortive attempt costs him one life token.

Result of success varies depending on effect of each spell. Player might injure others, get some lives back for himself or get hold of one of secret stones in the middle. For some more difficult spells (lower numbers), the outcome is decided by rolling dice. The more rare spell, the stronger it is up to the most horrible, that summons a dragon. Success in casting such a spell will make all players lose number of lives matching dice result. Unsuccessful attempt to summon it means same damage for a magician, who tried. 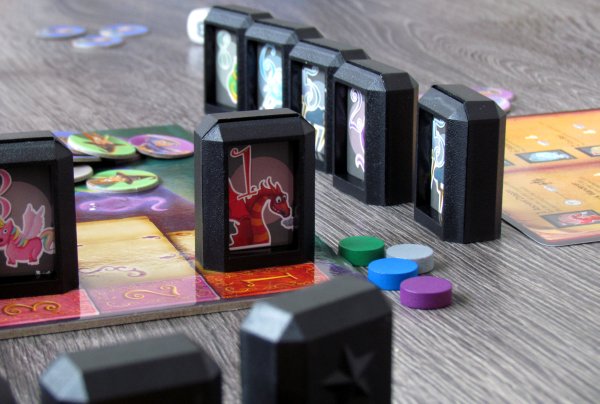 Wizard duel continues, players take turns trying to hurt each other. Each successfully hit removes stone from the player and it is placed on the board in the middle. As a reward for success, this magician can try his luck again! But he may now only cast a spell with a higher or equal value and his magic book is narrowed down to four stones, as he is not allowed to take any new stones. Only at the end of his turn, he can complete his stone collection back to five.

Round continues until one of the wizards loses all lives or all pieces are played. Winner (or the one, who eliminated another player) gets three points, others get one point. Sometimes, players will not get a reward (he causes injury to himself), or may get bonus points for gathered sected stones. Player moves his token by number of points up on the tower. Only mage, who comes to the top first, becomes winner after several completed rounds.

Abraca.. what? became a well-deserved hit at the fair. It gained our attention easily with the first game. Imagine, what could become of Hanabi, if you are not trying to deduce fireworks together, but as every man for himself, able to shoot each other in the foot. Fun in spell casting, when you are actually not sure, which you really have, is practically flawless. 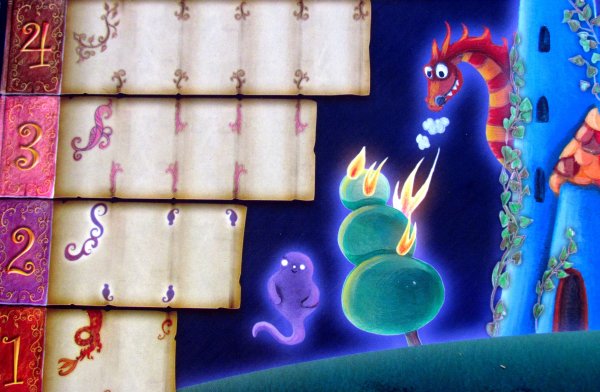 Although the game looks utterly random, everything is strictly tactical. You need some luck naturally, but most of the information you have is available on your opponent´s stones. While at the beginning of each round, many stones are hidden (whole draw pile), everything gradually crystallizes and at the end, everything becomes a contest of nerves.

Absolutely basic rules make this game great candidate for family fun, but it can easily get into hearts of advanced players. But beware, if you are the family, who does not like hurting each other, because this is what you do in here. But openly and with laughter. There is just the right ratio of luck and tactics, you should not feel as foolishly wandering in the dark.

Just the fact, that you can shout out the name of the spell, when you are trying to cast it, raises your heartbeat. And what about the times, when you try on some of the rare spells! These are indeed powerful, but one can never be sure, that he really has it correctly registered in his magic book. Dice adds a little unpredictability to powerful spells. This game surprisingly can not do without proper planning and strategizing.

Feeling of the game varies significantly depending on number of players. Is definitely weakest with two, when identity of stones is pretty uncertain until the very end. Moreover, even scoring does not improve impression, because players are constantly fighting over same point gain back and forth. In three, it´s immediately about something entirely else, but only with four and five players, you will have a true and proper magical entertainment. This game excels and still remains with gaming time near thirty-minute limit ideal for such filler.

Processing of the game is nice and mainly due to magical illustrations. Marie Cardouat proves once again, that she can capture attention of your eyes. We only pity mechanism of shoving tiles into plastic stones. Its tough to get them in and there is some chance, that by applying more force, you can damage some cardboard pieces.

Abraca.. what? has a tremendous atmosphere and managed to achieve, that players really feel like forgetful mages. This is its greatest achievement. And nothing else is actually needed, because it clearly shows, that this game is simply a great experience. Well, if you do not try to play it with two, which is a little boring. If it was not for minor technical flaws and duels, this game could get absolute grade. Even like this, we recommend it to all, who feel a little light-hearted for magical duels. Abraca.. what? is a true hit for us and best game from Spiel 2014 so far!

- boring with two
- you can damage tiles, when putting stones together

by Dušan on 17. 06. 2016
When they fear, they do not start to sweat or flee. Literally begin to sparkle and you should bet he one running! These are bombs and those are well-known [...]
Comments
Leave a reply