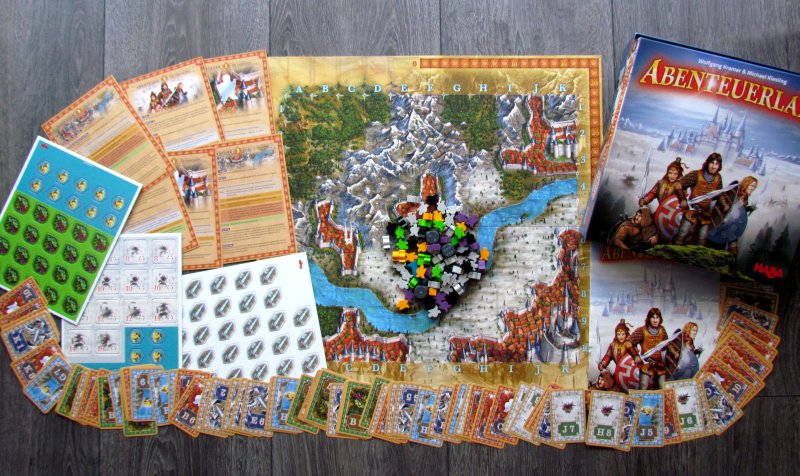 It looks like they have dominated our country forever. Nobody remembers lives without them. Phantoms. Creatures, which comes on the heels of fog. Fortunately, our search for hope is over. A group of adventurers answered our call and now they are here. Whole of yesterday evening, they have spent grinding their swords. We all feel just a little bit safer now. We are still a while away from certainty , but there hope again lives with us in our sheds. And this is definitely a change for the better.

Fight for the good in the game Adventure Land (Abenteuerland), which was published by company HABA within its new series of family games (like recently reviewed Spookies). Author of this news is the famous duo Wolfgang Kramer and Michael Kiesling and all the illustrations were done by Franz Vohwinkel. All this was published as a novelty for autumn 2015 and presented at the fair Spiel in Essen.

A box will not let us have any doubt, that this game will lead us again to some of those big adventures, such as in Andor. Foursome of dedicated heroes emerges from the mist, so they finally can have a good look at their enemies with red glowing eyes. We see them too, we gather up our courage to plunge into the fog as well. From those dephts, a big folded game board immediately peeks at us, with a map of the world divided along the lines like a chessboard to ten times ten fields. 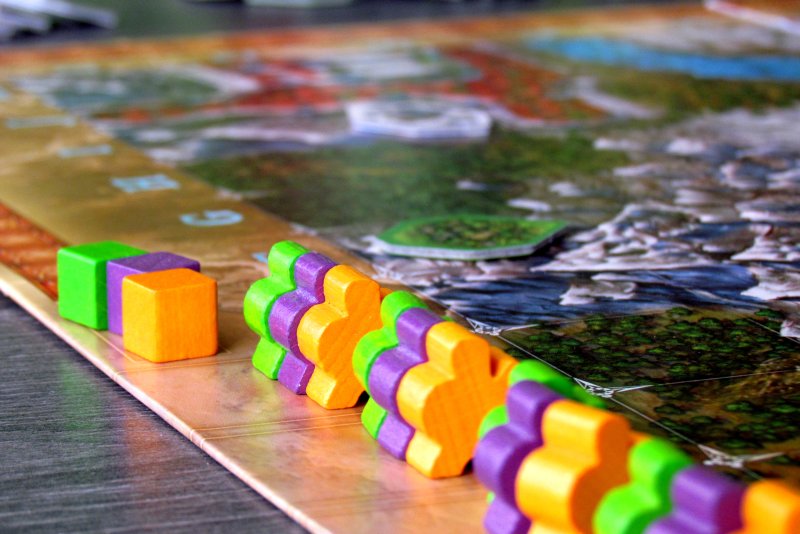 Along with it, full width and height of the box occupy also sheets of cardboard, in which different tokens are trapped. Among them are even fog monsters, that stand in your way. You will fight the temptation to leave them, where they are, trapped in sheets, for a moment. But eventually, you will punch them out like a hero, together with pieces of power, gold and herbs.

To do all they are told, players will also get three dice and a pile of wooden figures – ten adventurers for each color, together with four cubes, thirty common companions and one blue water spirit. Also a deck of cards is inseparably needed to play. Card always shows one of five possible terrains (forests, mountains, fog, river and city). Each has coordinates printed (letter and number), which clearly point to one frame on the board. At the very end, we will mention set of adventure cards, that set rules for your current quest.

At the beginning of the game, players get their adventurers on the board. But they do not always receive all as it depends on the number of participants. The same applies to pieces of companions, which are not needed as much with smaller number of players. Each participant will then put a cube of his color on score counter to zero and all his adventurers will be deployed to starting positions in the upper left corner of the plan.

After that, players choose their adventure (from available trinity), thus also simultaneously determines their tasks for the upcoming game. Card and tiles are laid in piles next to the board, as well as figurines. First round will be played together, because cards will be used to add some compansions to the board, but also some enemies. We will come back to that mechanism later, because its used during the game as well.

But now, we can finally start playing. On his turn, player now has two responsibilities. First in line is revealing two new terrain cards. These are coordinates point to a place, where something happens. Terrain on that card marks the actual event, whether it is adding new herbs, companion, swords, gold or mist monsters.

The other event is already shift of the adventurers. All heroes always start somewhere in the upper left corner. But the player can shift them and always as far in one direction as he likes. Then he may turn and move again without limitation. This way, one adventurer may be moved. Or player can choose and move two, but each one only once without the turning part (again without limit distance). Space, where hero stops, will provide reward to his owner. Thus, if there is something lying there, he may pick it up. All movements can be performed only towards east and south directions and pieces can never go back up or left. 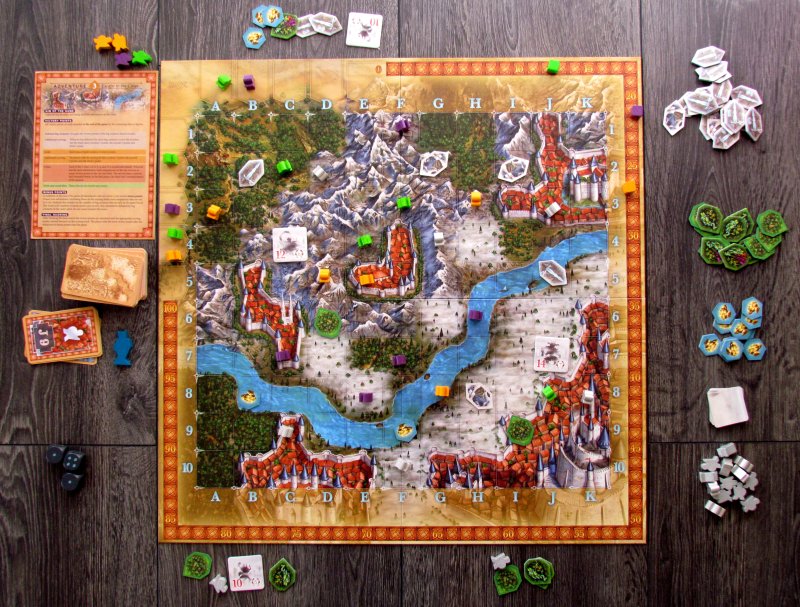 From time to time, an adventurer in their quest for power and glory encounters a veritable fog monster. At such a moment, he adds strength with number of his companions and possibly sword tokens, that he is willing to sacrifice for the struggle. Each blade brings with it opportunity to roll the dice once. Aim of the player is to reach a sum greater, than he finds on mist monster. If his efforts are still not good enough, he may use pieces of herbs and gold to increase strength or re-roll dice.

Victory in a fight means, that player gets the monster piece as his property. Conversely, defeated adventurer immediately leaves the game board together with all the equipment, that was used to fight with the monster.

Game ends, when supply of compansions and swords runs out. Goals differ across various adventures and alternate the way points are awarded. Mostly, they all depend on the defeated monsters, hoarded gold, swords and herbs, which players saved. It is obvious, that winner will be the one, who accumulated the most points in total, scored according to the rules of the adventure. 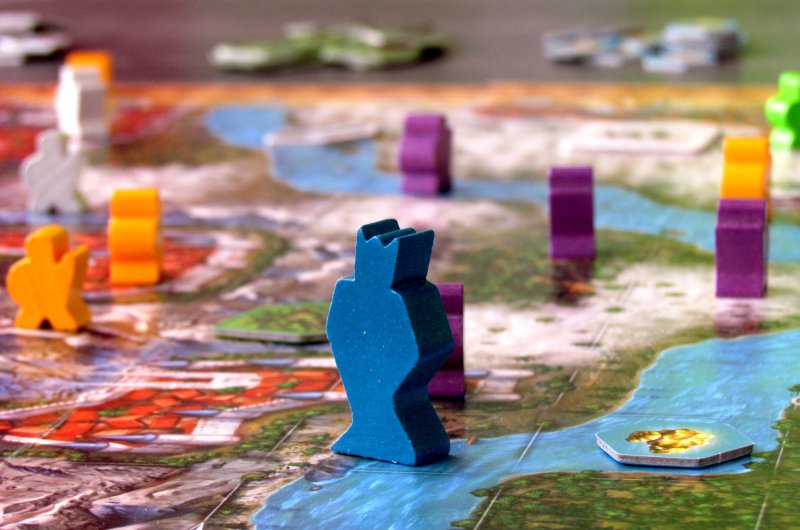 Adventure Land is an honest adventure game, which remains very accessible to less experienced consumers. In doing so, the authors have not forgotten the most important thing: that players need to be at the heart of every struggle against evil. Battles use dice and thus luck gets in the way, but it can be influenced by using tokens of equipment.

Thus, coincidence does not play such an important role. At least not in combat. But luck of the draw in cards from the deck has great influence. If the player finds easy prey near his hero, it will certainly please him. But players have always enough adventurers cruising around the board.

But adventurers have only two directions possible, which is a major betrayal of the entire match. Players must move figures in conjuction with their tactics, because they can not ever catch everything. The movement of individual pieces is an entire zigzag, but it is never bound by distances. Gamers are sufficiently free and it is up to them, how they move their pawns. Only movement is the right way to win and whoever moves wrong, he will probably have only few points in the end.

Thanks to different point targets, game remain flexible enough even after more matches, although initial disposition of the figures is always the same. The game is not demanding, bringing itself into a family type game and parents can play it even with less than recommended ten-year old children. Because players are not climbing into each other’s cabbage, game works well in all counts and also thanks to altered amount of available figures at start.

Its length exactly matches its destination group. Less experienced players will appreciate, that the duel will easily fit into an hour and usually ends within 45 minutes. Biggest drawback can be seen in the game presentation. And now we are not talking about processing, that is nice, but rather about first impression, which has for some reason tend to discourage. At the same time, once the players get behind the scenes, they will gladly try other adventures offered and be happy to live some adventures.

Adventure Land could easily become synonymous for entry family game. It is nice to play, but it contains enough interesting and unusual things, that makes inexperienced players interested. This is a really good beginner game, which also knows, how to handle fun gameplay. Adventure Land is an adventure for all.

Adventure Land has brought us a pleasant surprise on blades of swords. This is a well done family game, that everyone will appreciate and mostly the less experienced lovers of adventure. Ggame contains an interesting mechanism of always moving down or right, so players are constantly faced with a difficult choice of bumping into the bottom right corner, where adventure stops for that hero. But at the same time, they have a large selection of figurines and ways to hunt down points on the board. Fights with monsters are just one of the sources, but naturally the main one. To do this, dice are also necessary and with them some pinch of luck. All of this combined means, that Adventure Land easily finds its way to the hearts of players.

by Dušan on 24. 11. 2016
Our land is filled with diseases. Some are passed by with a wave of our hand, but then there are those, where everyone becomes afraid. Every few years, [...]

by Dušan on 29. 10. 2016
Crazy alternating images may only have a few reasons. Either someone is trying to make a movie, which or he is looking for one particular monster in a pile [...]

by Dušan on 02. 09. 2016
We are like a family. We have known each other for many years and we know even most secret things about ourselves. Nothing can surprise us. But you can try [...]

Review: Deception Murder in Hong Kong – every crime has a suspect

by Dušan on 19. 05. 2016
Dear detectives, you gathered here today to expose a single perpetrator. Follow the traces, that lead to a single irrefutable objective. This murder must [...]

by Dušan on 13. 05. 2016
Doctors are not just those, who treat their patients and administering medications. There can be doctors, who are playing as part of their jobs. The tubes [...]

Review: Guess What! – three of the nine

Review: Pingo Pingo Raise of the Golden Pineapple – penguins and their golden appetite

by Dušan on 25. 03. 2016
Penguins seem like friendly creatures at first glance. In fact, it is but cannibals, who will swallow you with your clothing, when you look away just for a [...]
Comments
Leave a reply