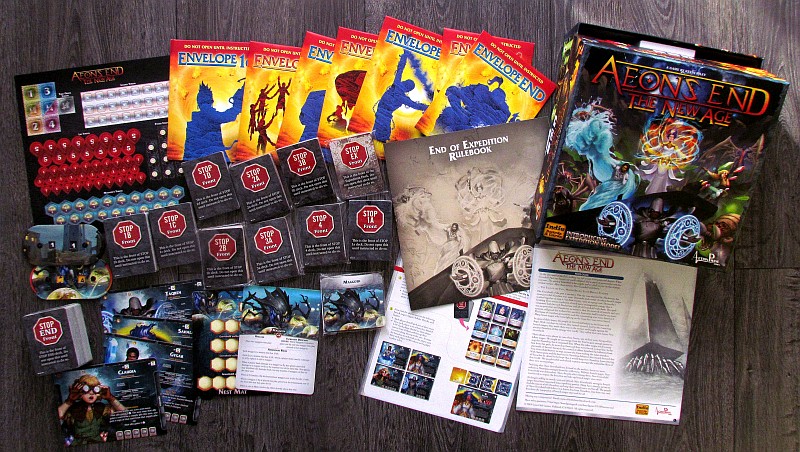 Everything has changed. It is as if our lives have been completely rewritten in a matter of days. Our homes no longer exist and nothing we knew is no longer, what we would like. But houses can be rebuilt. Elsewhere, with other people, but its possible to start again. And then we will find the one who caused us this suffering and show him that we will never give up!

The story of Aeon’s End world is constantly advancing. So it develops as wildly as the interest of gamers in all the adventures, that are offered in this game. This time, the game is titled Aeon’s End: The New Age and is again signed by designer Kevin Riley. The novelty is produced by Action Phase Games and Indie Boards & Cards, but it travels to stores in Europe thanks to Esdevium Games.

Aeon’s End is a cooperative game with brave heroes in its center, but also one villain trying to destroy everything and everyone. The central theme of the game are the rifts, that players open and gain the possibility of attaching stronger and stronger spells to its magic energy. However, players always have a set of cards on their turn to use for actions. They can get not only the currency needed to buy additional (stronger) cards from the joint offer or to open rifts. Each mage has four of these magical openings, which he gradually opens, either slowly at a lower price or quickly at a higher price. And it is then, that he can add spells, activate them and harm the main bad guy. The order of play is decided by the shuffled deck, and as soon as the villain card is drawn, the top card from its deck is revealed. And that is how they try to reduce lives of players. Heroes, on the other hand, want to destroy their arch enemy and all his minions. 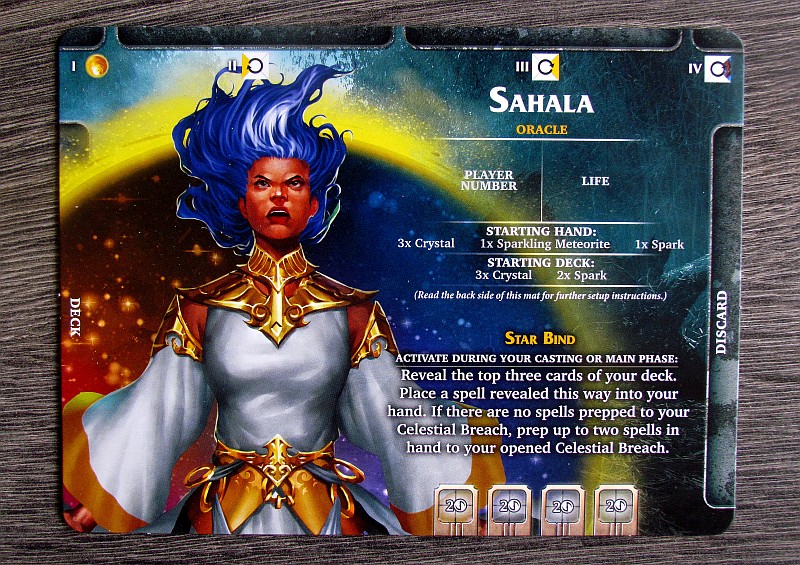 The characters of new rift mages are waiting for the players on the lid, who invite them inside and hope, that they will help in their seemingly futile fight against the Nameless One. The game remains essentially the same, so after opening the lid, a lot of cards and some life indicators await the player. In addition, there are also seven numbered envelopes inside, which indicate that this time the players will discover something as they play.

The novelty therefore adds to the course of the game not only variability in the form of new characters and cards, but above all the system of expeditions and several other novelties that are related to it. In general, therefore, the heroes will go on expeditions from their base in the barracks. This building is represented by a deck of cards (respectively at the beginning of the drawn randomizers), which is available to players and in which new cards can appear based on their success. 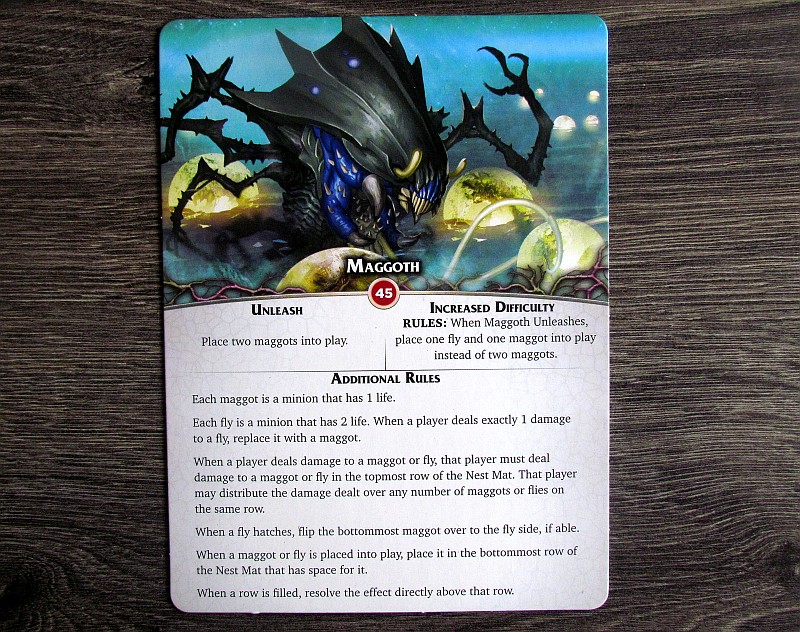 Beneath the name expeditions, there is actually a campaign, which players gradually go through and thus reveal new envelopes. This is also the only slightly legacy effect, where you only lose the feeling of unexplored opening of the envelopes. In general, however, the series of games is always easily replayable, even for those who have experienced it once.

An interesting element, however, is the fact that players in expeditions are not limited to cards from this box. If you already own any other components from previous games, these can also be used in building new custom campaigns and, above all, you can play everything with your favorite heroes.

Thanks to this tremendous variability, where characters and cards are drawn at the beginning of the campaign from all Aeon’s Ends components and then placed in the barracks, the new way of playing offers a tremendously new level of variability. And not only for the new content, but also for the old one. They will force you to use cards and heroes that you would not normally choose. But with these random campaigns, there’s no longer associated a story, so you don’t have to deal with any of the story cards. 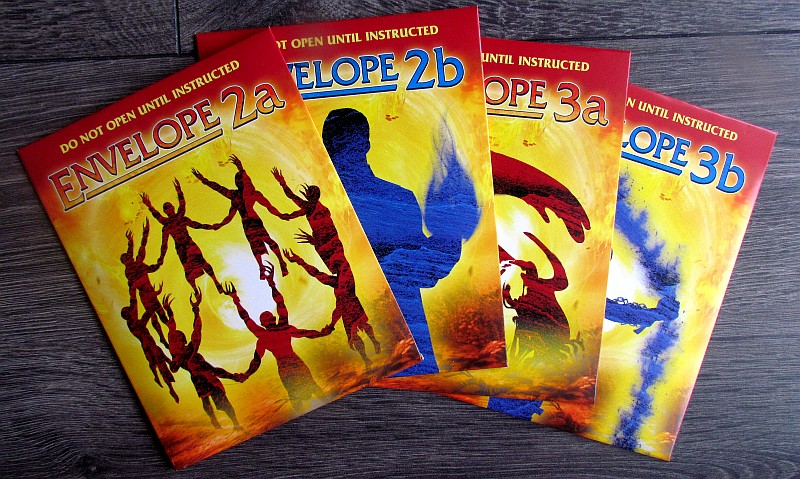 During the four battles, the enemy gradually gains more power. But this also applies to heroes, who receive equipment here in the form of treasures. These can be for a specific character, but they can also offer a common effect.

The new heroes themselves are again quite different and it can be seen that the author really cared about them. We have already praised this in our last review of small expansions, and again it should be emphasized that the differences between the heroes are one of the basics of what motivates you to return to the game and discover new characters.

Unfortunately, you expect your campaign to have some opportunity to influence the outcome based on its success. But that is not the case here. Whether you win or not, the storyline continues the same. In addition, the whole story is described on cards, instead of in a clear book, as is the case with similar games. This is a slightly strange decision that makes handling and advancement worse experience.

The rest of the gameplay is the same as we’re used to at Aeon’s End. On the other hand, this means that the entertainment is at an excellent level. Even the workmanship remains great and the overall impression is therefore A+. The novelty has no effect on the playing time or the number of players. However, the campaign can be played in a solo variant, which can be attractive for many players. 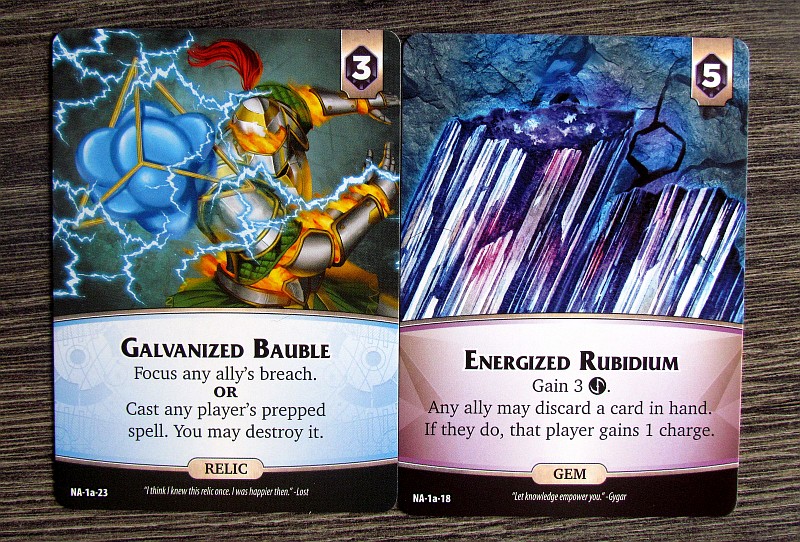 Aeon’s End: The New Age is a new addition that adds an incredible new touch to your already owned boxes, making them even more replayable. In this novelty, players will learn an expedition system that connects a random set of heroes and enemies to fight in campaign. Thanks to that, the novelty is great, because the rest remains the same. Everything in the new box is subject to expeditions. So if you want more content and experience with Aeon’s End, then The New Age is the clear choice.

by Dušan on 15. 04. 2019
I’ve heard they live somewhere in the tree trunks. They are hidden, so that an ordinary person can not easily see them. Only those, who believe and [...]

Review: Aeon’s End – The World That Was

by Dušan on 02. 11. 2016
Do you remember your dreams? No? That's probably a good thing, because you will then wish not going back to sleep again.
Comments
Leave a reply