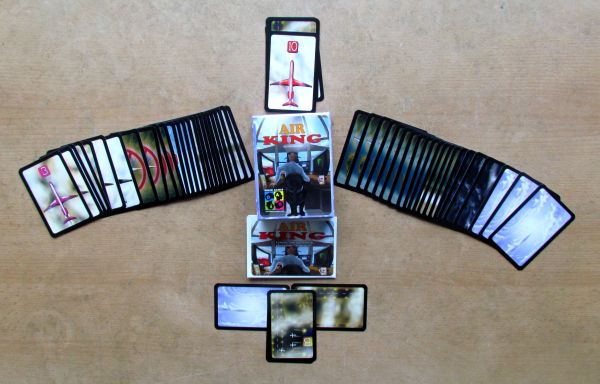 Air traffic controller job is a challenging one. You must not hesitate for a moment. Every word can be the difference between life and death of hundreds of passengers on board the aircraft. This alone would have stressed some people so much, that they could not even come near control tower or climb there. However, there are brave men and women, who perform the job without any mistakes, guiding dozens of aircraft for safe landing every day.

Then an idea, that they should have each also their secret mission, might sound a little crazy. Landing some of the aircrafts sooner as others just to win a bet? Yes, that’s right. But at the same time, you must ensure safety of all others, because one mistake means end of efforts and possibly even jail. Races in guiding metal birds to landing? This can be done only by a fool! Welcome among these freaks in Air King card game.

This is the last member of a small stable of Brain Games for year 2012. We have already had our chance to test all other: Food Chain (review), Construction Zone (review) and also freshly Central Market (review). Air King’s author is designer Oliver Sihiveer (Construction Zone) and his thoughts were embellished with graphics by Gints Rudzitis. 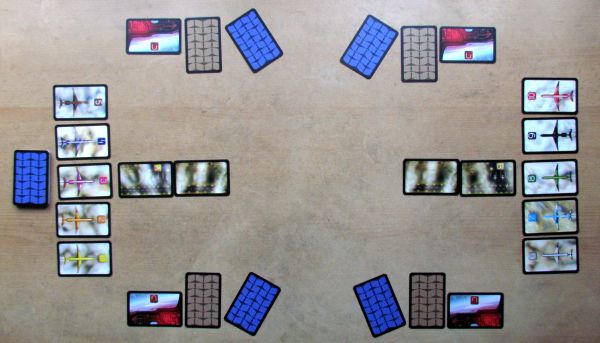 Game is hidden in a tiny box made of surprisingly solid cardboard, just as the other games. In doing so, its size is still small enough to fit into a larger pocket. That can not be said about a game in progress, that requires a bit more space, but we’ll get to that in a minute.

Now we mainly must tell you, what is hidden under cartoon image of the control center with plane just flying over it. Inside there is so little space, that 54 cards can hardly breathe. And yet there are still rules squeezing with them, written on a folded square paper.

All the cards have the same pattern on the back side and differ only in color. According to it, you will recognize three species. Largest deck is purple, containing action cards with one big picture and sometimes a few additional directional arrow for movement. Smaller package of gray card is the common property of all the players and includes everything necessary to set the game up – dozens of aircrafts, two airports and landing zones. 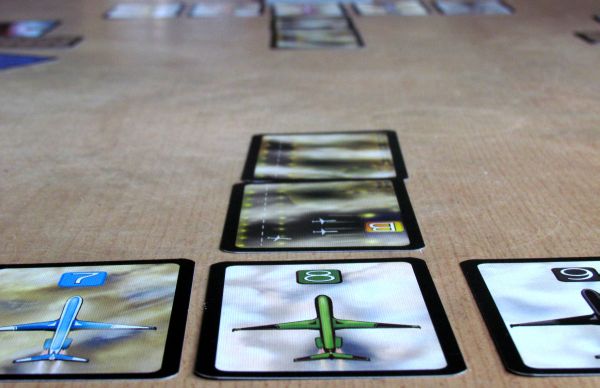 Last pile with a light brown background provides tasks. You will not find anything else than four numbers on their front. Each of them corresponds to color of one of the planes, with which will you try to reach other airport as quickly as possible.

At the beginning of the game, you must first create a flight zone. This means, that on each side of the table, you will place one airpoirt (A or B), leaving room for exactly five cards between. The first of the five coming from each airport must be landing zone, while the remaining three will remain empty and available for flight. Behind airport, you put winged machines – on one side, there will be numbers from one to five, while on the other side six to ten.

Each player now chooses a random card with his task. It will tell him exactly, which aircraft he has to guide from one airport to the other first to win. On the other hand, this card is your secret, so you should not show it to anyone else. Each player gets also single card of technical issues and one action card from shuffled deck of flight events. You can pick them up and start playing. 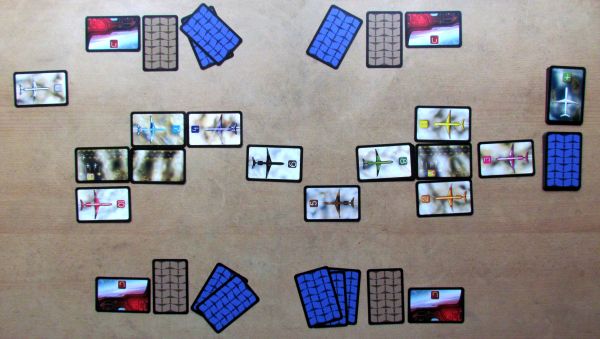 Opponents will move planes in turns. At the beginning of your action, you draw one card from the pile and add it to your hand. Then its time for second phase, you have two movements with the aircraft up your sleeve. They can be divided arbitrarily among all the planes in the air.For those that are still standing on the ground in their home airport, you must first fire up its engines and take off. It is also one movement and it means, that you take the card from behind airport and place it next to it. This is called a departure area.

But later, you will move planes in the air. Your two movement points must always be used and is only up to you, whether you divide it or dedicate the both to one machine. During the movement, you can also use up to two cards from your hand. They can bring more movement, but also the unknown possibilities to influence course of traveling passengers on board.

Aircraft can move not only forward, but also to the sides. This is important, because when there are two flying machines against each other, they can only continue like this. You can use any route between airport, move to the sides and go round other planes. It just depends on the will of the players. 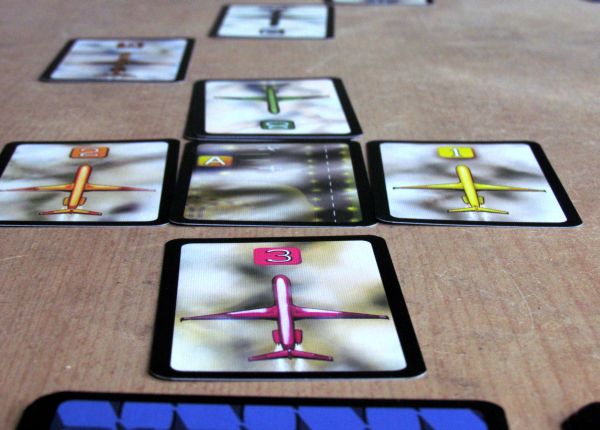 Each player must follow hand limit of four cards. By doing this, game forces you to constantly use special event cards, that give the game a proper bite. In addition to helical motion or switching (near miss), action cards provide also options to block enemy aircraft or placing a storm in their path, so they have to go around. You can even send one plane with technical problems back to the airport, where it took off.

Also landing has its fixed rules. Players must guide the plane on the runway, before it can move to the next card and properly land on airport. Everyone tries to do one thing. Fulfill his tasks. To win, it is necessary to transport four specific aircraft, whose numbers are on your card from one airport to the other. Once you succeed in seating the last one and you get to the turn, you can declare victory.

Air King is an interesting card game, that excels mainly in its topic. Flying is managed with perfection and players feel, like they were really directing traffic. All cards support tense atmosphere and gameplay mechanics simply fit with each other. 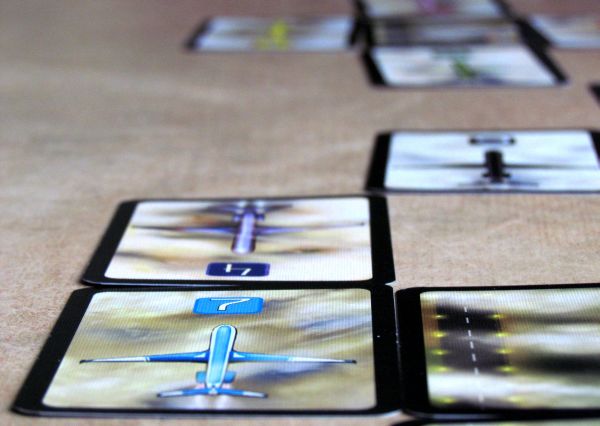 The most important thing in the game are cards of secret tasks. None of the players does know, which four planes are others interested in. Each of the dozens of machines occur several times on the cards, so you may even have same plane like some rival. Every turn provides real tension, because players will try to deceive and will move other aircraft. Bluffing is part of the game. It is important to keep a secret, which planes are you in fact trying to move, because if opponents know it, your machine can be running into some unforeseen disaster.

Just in random distribution of cards comes luck into play. And it that may help some players even like this. Aircraft, which are on task cards of more players have a greater chance to quickly get to the finish line. Then player with aircrafts other than others may be in proper disadvantage.

We have already mentioned the card of technical issues. Fact that the plane can return back to its original airport even, when it almost landed at the destination, is not good for atmosphere. In our games, we have introduced a rule, that you can only return the plane until the moment, it crosses half of the distance. Conversely, you can even use the card to accelerate landing (plane with defect gets priority on the tower) and jump with it to the finish, when you use it later. But this is also only our variant, we tested. It opens up new tactical options to the game and does not interfere with gameplay, because each participant has only one card like this. 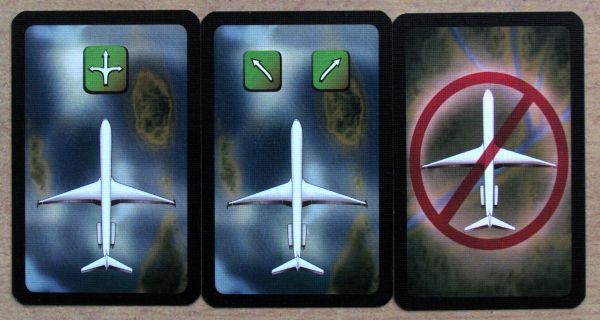 But we should go back mainly to possibilities of sabotage. Opponents can always create roadblocks for each other. But it is not so simple to really block enemies, nor can the others become angry, because aircraft ownership does not exist in this game. All players are moving all planes, creating a lot of interesting situations. And you have to control your anger, not to reveal yourself.

It is a pity, that such a simple game again failed to explain rules in one hundred percent from rulebook. Some details must be read between the lines, more examples are missing and the whole text is too short on words. Many things remain unsaid. Fortunately, this is no major issue, because the game is playable without problems and everything fits in the end, when you think about it a little.

We will stay a little longer on processing. Background of task cards and aircrafts is merely recognizable in artificial lighting (gray versus light brown), which fortunately has no effect on gameplay. These two types are used separately. Overall, we rate graphics as well done, although we would certainly be pleased by more variable illustrations. Maybe each of the dozen aircrafts could be at least a little bit different than other. 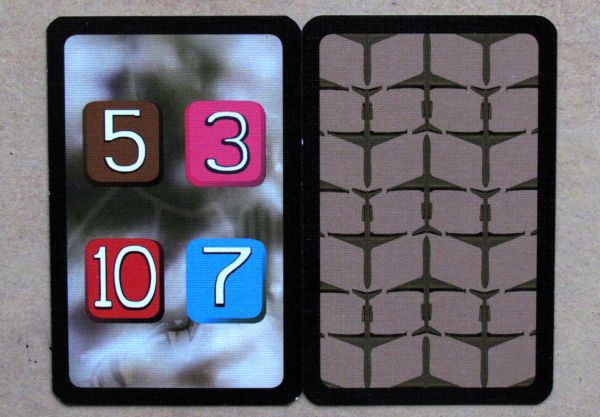 Game will show its quality over a half hour game in two, three and four opponents. Secret is always the same and number of aircraft also, meaning game takes always same amount of time to complete, only you get fewer turns. Only those misfortunes are encountered less in two players. But that does not diminish fun in the game can be experience in all numbers.

Apart from minor setback in processing, Air King is really well done and fun game. Secret tasks, transiting aircrafts and uncompromising action cards full of sabotage. Suspenseful to the end – this is the world of air traffic controllers and can be also yours, at least in this card game.

Air King invites you – a player – into a chair of traffic controller, who will guide airplanes from one airport to another. Each and everyone of you will have secret assignments, specifying four planes to transfer to become the most successfull and also winner of the match. Players can besides standard movement use also tricky ways to prevent their rivals in getting ahead. But sometimes you might share your task with other players as well, without knowing that. The most important is movement of the aircrafts, which must first lift off and can land only through route lying in front of each airport. Game is quick and simple, which is its greatest advantage. Rules can be learned from not so well done book, but its sufficient and answers all your questions. Great atmosphere and feeling of traffic controller is spoiled only by chance to return plane to its original airport even a moment before landing. Air King is nice and well-done card game, which is portable and you will take it with you gladly.