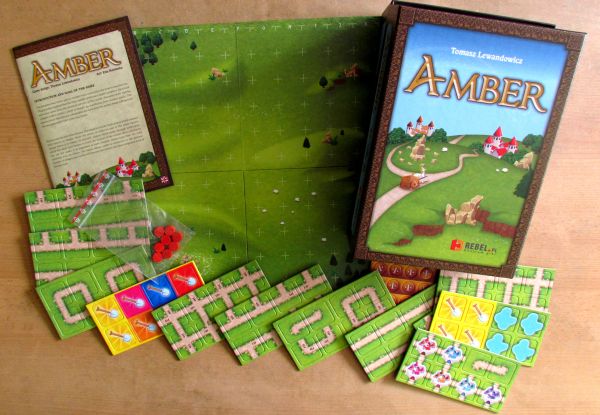 Building a royal road is the task, that fell this time on your shoulders. But while some roads lead here, the second there, there are roads, which lead nowhere just yet. And your task is to connect all the dots on the map, so kings, princes and princesses can visit each other. At the same time, you also want to become part of the myth, that will be passed by wandering travellers. You have to be the one and only builder of this giant web of roads.

That concludes our coverup story. In reality, kingdom is rich in amber, which is located in the ground. And no common villager must learn this. King want to raise it up and get it processed. To do this, he need roads. But only the one king, that gets to the most sites first, becomes the richest lord of the whole landscape. Will you be the one?

In the board game Amber, you will get such a task. Four castles, large plain and limited opportunities to build trails. So this is a new board game published by REBEL.pl, which published in 2012 a very interesting Slávika (review) and two more games, which reviews will be published about in the future (The Cave and Mercurius). 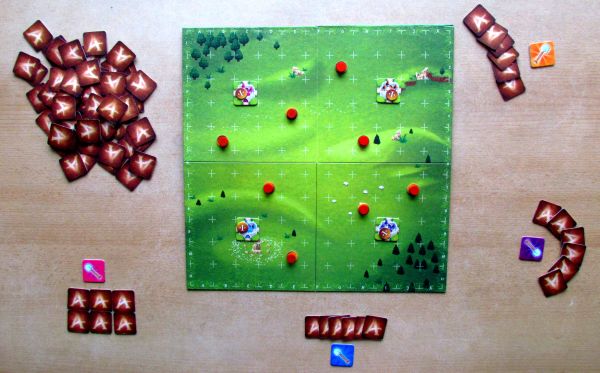 In this case, the first board game child of Thomas Lewandowicz, is inspired much of the classic Carcassonne (review in Czech), as you will soon find out for yourselves. Individual cards, used to play, are drawn by Ewa Kotowski.

Amber is in the same box as similar games, such as the recently reviewed Basilica (review). And inside is exactly, what makes basis for connecting games. Sheets with square pieces with a variety of road and intersections.

Besides these, you can find colored pieces with a shovel and four castles in the same colors. Both belong to the individual players. Along with squares, there are also round coin tokens on the same sheet. 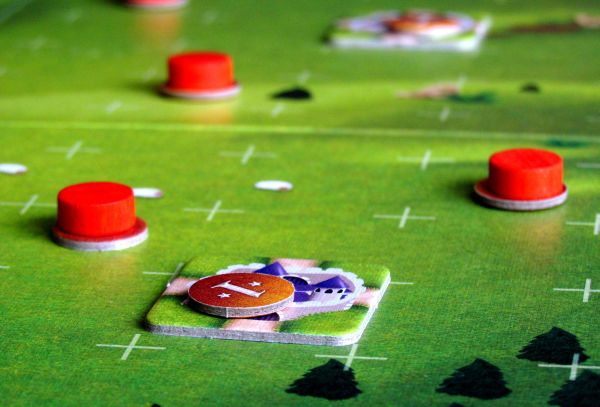 But Amber is not just any game and therefore it also needs a game board in addition to tiles, which will make up roads. Land of your kingdom drawn on board is covered with grassy vegetation with occasional tree or groups of stones. Nearby there are grazing sheep. Just an idyllic view, that will son be disrupted by architectural machinery. For gaming, you need also eight villages made of wood (round tokens), which are main deposits of amber. The actual game board is divided by means of crosses into squares. Board measures eleven times eleven these spaces.

Players must put villages and castles on the game board, according to one of the prepared scenarios. Those are always dependent on number of players and there is more for each number: six for two, three for three and six for four. According to that diagram, you put castles and villages tokens on coordinates in the kingdom. Each castle and village gets also one coin. This represents reward for its first visitor.

Kingdom itself starts with no roads and is only up to you, which way is the traffic routed. All players get six pieces from shuffled pile of tiles. Big stock of all other tiles is then created beside the board, from which you will later on draw. Players choose color of their castle. This is place, from which they would start road construction. 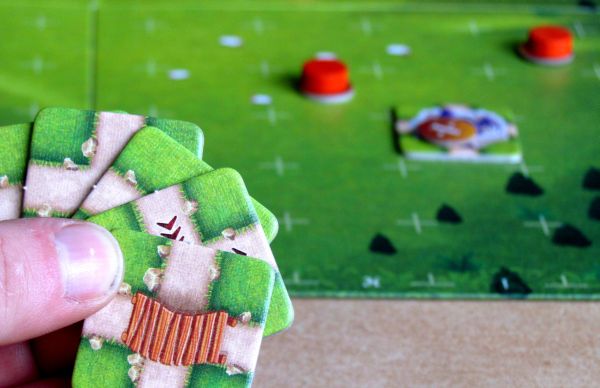 Everything is ready for your first turn. In each round, player has one simple duty, and that’s obviously putting a tile on the game board. He can always choose one of six, that he holds in his hand and thus begin building the road.

Roads can, however, be built only in a place, where your workers can get to on roads. That means, that you can expand only your own network, until you connect to someone elses. This also means, that your roads will serve also to the other players. Roads are neutral, so when you connect to other part of it, you can use the whole.

An exception is one-way trip. These tiles have drawn arrows on them. These routes can be followed only in one direction. When going in opposite way, you can think, as the road was even not there. It can not be used to establish a connection from village to castle. As with other games, where you are creating world from a scratch from square pieces, all laid tiles must fit to those adjacent ones. You can add only path to path or meadow to meadow. 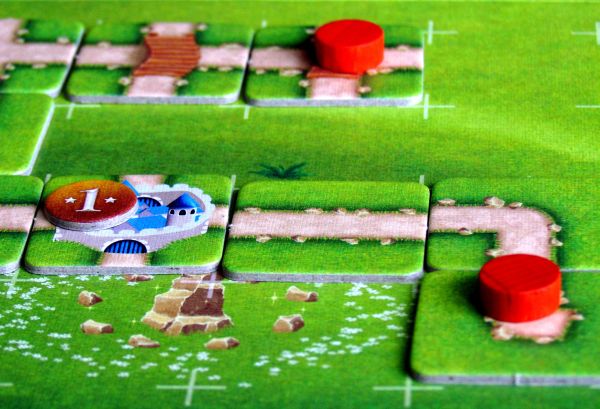 But what a game would it be, if you did not have some other tiles with special effects. There are swamps for blocking, bridges and roundabouts allowing replacement of some of the existing roads. Both these can easily disrupt your opponent’s plans, just as demolishing something with a shovel.

At the end of your turn, you simply draw a card, so you should hold six again. And that is your turn in all its beatuy. Now it is on your opponent to react to what you have done. What are actually the players trying to accomplish? In the first stage of the game, their main efforts are towards connecting as many villages as possible, while being the first to arrive there. If you get there first, you receive award in form of one coin laying there. This is worth an important victory point.

In the second stage, your goal still remains connecting. But this time, you are trying to connect those other villages and opponent castles. Even these, however, provide victory points at the end of the game. Indeed, when one player has access to all the castles and villages, the match ends and all players add up their victory points. 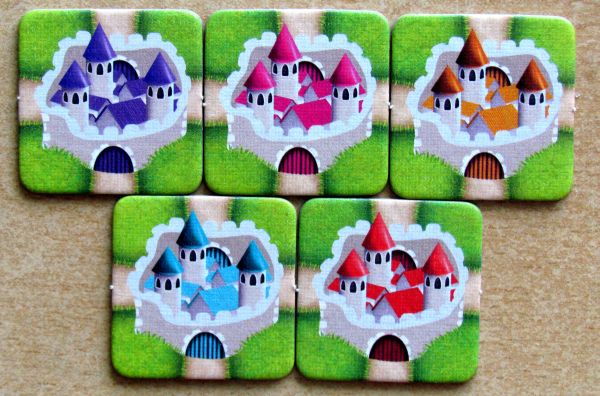 The player, who ended the game, has a great chance of winning, but his triumph is not yet certain. Number of gold coins collected from connected villages and castles can indeed reverse everything. In total, you get one point for each coin and also for each village, where leads your road, no matter how difficult and cornered the path is. The connection to opponent’s castles will bring another two points for every opponent. The player with the highest points gain for interconnection is winner of this game.

Amber is a game built around interesting ideas of linking predetermined locations on the map. Basic dispositions are designed in a way, that each player has the same distance to every interesting place. Here you can see, that the author carefully thought towards balancing the game.

Similarly, it is excellent, that you always have a choice of six cards in your hand. The game is thus not so much influenced by luck from the draw. You can plan several moves ahead and actually prepare the way with a slight chance of getting even better tile. Because other players can not influence your road, until they are connected to it, beginning of the game is about preparing good routes for your tactics. 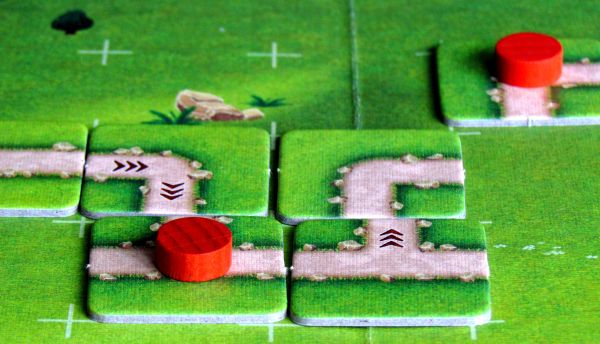 Excellent are mainly one-way streets, which can affect many things. They ensure, that although the connection to your opponent is there, your rival can not use this route to get to you and must build an alternate one to get some profit. This idea offers interesting possibilities for maneuvering, because such pieces are on offer quite a lot. You must, however, be careful not to closed path for yourself.

It is necessary to plan ahead, but when you combine roads into one bigger web, players then can add tile everywhere. And this is where the most fundamental problem arises. If you put a piece one step ahead of the village, your opponent gets it and so the coin. No one wants to proceed to the village this way, and everyone is trying to create a new route. This slows the whole game really down and disencourages players. Game is much more quiet with two players, where is almost no interaction. But then there are matches in more opponents, which are finally more fun.

Nice details will cause you to have a very good feeling about the game, when you’re reading rules of Amber. The game, in fact, unfortunately, does not have the correct mood, which we would imagine. Playing tiles seems really like you are doing something, but then there is that feeling of.. lacking motivation, I guess.. 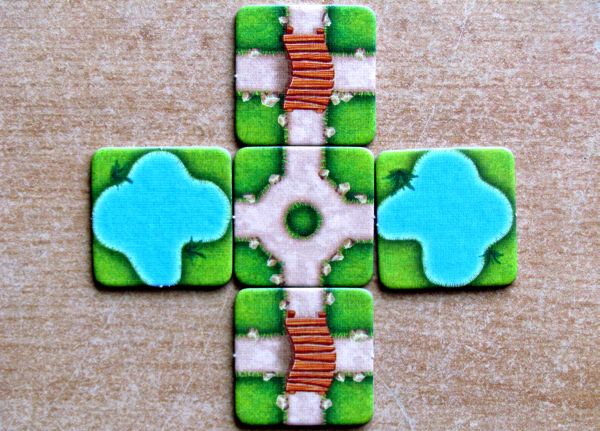 Building roads, linking castles or conflicting is not enough. At the moment, when the battle between the players begin to intensify, you are rather looking for a way to avoid them. That’s not quite the way the game should work.

While processing of Amber is nice and everything else is exactly as it should be, the game did not evolve, how we would like it to. It is therefore again a missed chance for a good family companion. Amber unfortunately has no proper target audience, that it would satisfy strong enough..

Amber is simple family game, where everything is bound to connecting square tiles to a bigger whole. This time, you need also a game board of a kingdom in addition to road tiles. There will be castles and villages there. And you must connect them with roads. You gather points for every castle or village, which is connected to your homeland. But only first, who gets there, gets also a special reward. This is, why building should be a race and fun. But there is no owner of roads and once your tiles meet opponents, you can use his roads to travel or ruin his plans. Motivation to expand these common routes then falls down and players have a tendency to look for their own paths. And there comes one-way roads handy. They are the most important part of the game. Unfortunately thanks to avoiding contact, because other player then can simply steal your winning move, game loses attractiveness. It does not matter, how many scenarios there are. It does not matter, that you have shovels to demolish. Players have more tiles to select from, bud even this idea does not save it from average. Amber will find its fans, but there will not be many of them.