Review: Arcadia Quest Beyond the Grave – love beyond the tomb 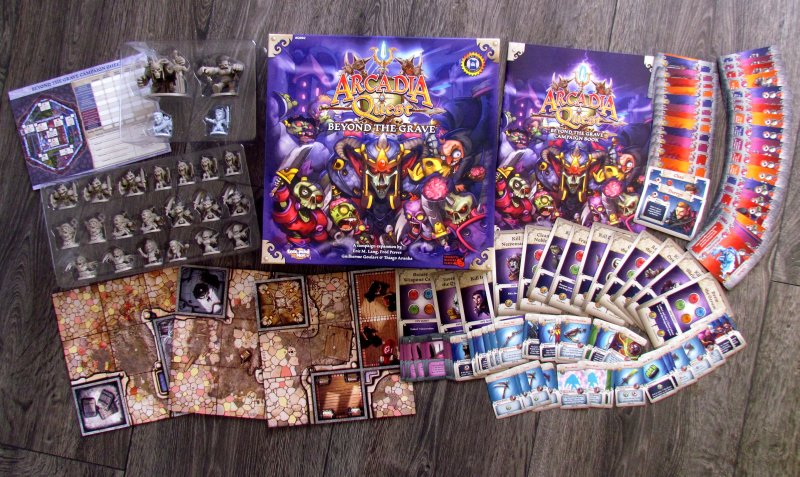 Did you hear it too? Maybe the underworld is not just a fairy tale. Maybe every monster, who are sent to the next world, will come again. Stronger and full of desire for revenge. But this possibility applies in both directions. I tried it myself, I must know. How? I died, but a few minutes later, I was back among the living. I saw tombstones in the land of the dead and heard whispers, that they enable even mortal to peak into the life of the dead, connecting both worlds for a few moments. This knowledge might me useful in my next adventure!

As a proof about all this, we are served expansion of Arcadia Quest game called Beyond the Grave. Four authors remain the same: Eric M. Lang, Fred Perret, Goulart Guilherme and Thiago Aranha. Two illustrators Andrea Cofrancesco and Mathieu Harlaut were joined by Nicolas Fructus. Their joint work was published under logos of Spaghetti Western Games and Cool Mini or Not. Game is then offered in European distribution by company Esdevium Games. It is novelty for first half of 2015.

Beyond the Grave is an expansion, that does not fade in size compared to original game, only a little when height of the box is concerned. But the cover is large again, with a group of enemies, this time green undead. However, inside are waiting all those delights, to which we have become accustomed. There is a large booklet with new campaign and sheet for recording your results. Trio of double-sided game board with the new environments is a must. 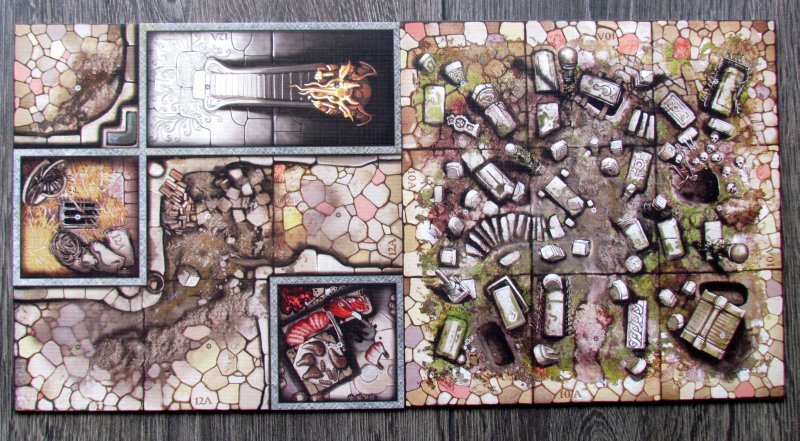 New sets of cards (heroes, monsters, tasks and upgrades and also new fourteen gravestones with images and text) are followed by twenty-four new awesome miniatures. Only two of them are heroes named Darryn and Chaz. Rest of the squad consists of enemies led by a huge Dread King. Figures are again carefully stored in boxes and plastic inserts, aside from other components.

And what is actually Arcadia Quest? At the heart, this is a really simple dungeon-crawler, in which each player controls one hero and tries to survive. He can improve between adventures, but during the match, rivals go at each other’s throats. Now the campaign is essential feature and combines individual stories into one whole. The game is full of monsters and battles, that take place using cards and and above all dice. Motivation for players to attack each other is large, because there are rewards for defeating enemy heroes. But the death is not the end, because hero can return to the next game again. It is always fulfillment of the tasks, that players have a common need to do to finish first.

All this remains valid even, when we start playing Beyond the Grave. It offers a sufficient number of new tasks, which will be mixed across adventures. There are both challenges of players against the environment (PvE), as well as those supporting PvP (player vs player) combat. You already know those killing blue / red / green / orange hero quests. But players will also have to acquire some items or kill some tricky enemies (Dr. Spider or Frank(enstein)). 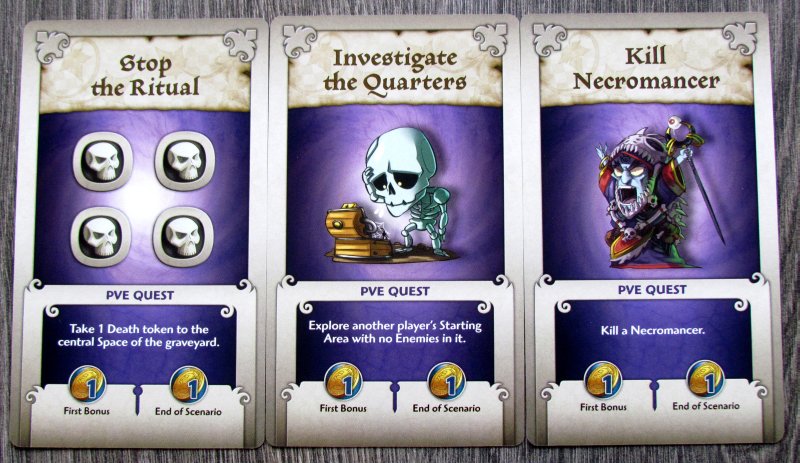 Two new heroes are both of men’s gender. Each one has his own skills. Chaz takes care of his appearance and better fights, while he is not wounded and his beautiful face is pure. But this usually does not last very long. Darryn on the contrary is a dangerous opponent for those enemies, that were not scratched by any weapons yet. Both heroes are interesting and their miniatures look pretty.

There is enough new enemies to get you interested and we can guarantee, that players will not be bored. These are undead, which is not easy to kill. But above all expansion represents a new huge monster  – a Dread King. His miniature is first one to occupy an entire field on the map and because of that, none of the heroes may share this space with him. Nothing could stand in the way of his enormous body, so any miniature is pushed away from the place, which he enters. There are also ghosts among the opponents. Their inclusion also requires adjustment of certain rules, but provides you with even more fun and tactics!

Overall, new monsters are great enrichment. Fresh miniatures and their features guarantee, that you will not be bored for a second during new campaign. It’s also bewitching tale, which is told in a total of nine chapters. At the beginning of scenario description, we can find a map, that clearly shows whole town and also connections of individual missions and their difficulty. Players will start around Arcadia city and only later, he get into the heart to the very Unholy Mausoleum.

Main new concept, however, are tombstones. Their cards are at the beginning of each adventure (a certain number based on instructions) distributed over the map. Once the player finds himself in a place, where such a card lies, he can spend one movement point to reveal it and immediately carry out its effect. It usually it a pleasing action and may allow passage into the beyond, where player can interact with monsters on the board and move them, but it may also be possibility to harm rivals or vice versa to get some equipment.

These cards are always full of possibilities and are randomly scattered throughout the board. Thus, it adds tiny level of randomness into matches. Players often try to reach the site of the tombstone, because underneath can be sensed some advantage. There is thus another cause, for which they will all chase. So the game is even more variable and tense.

But the monsters came from beyond the grave and their touch is not pleasant. Frequent contact with them may result not in death of contested hero, but his forced return to spawning point. This may happen also as a result to hero revealing, for example, gravestone card. This so-called banishment is a new skill, which in turn pushes the possibilities of manipulating opponent’s hero another step further.

The package also includes new upgrade cards. They can easily blend with existing ones and you immediately may start using it (even for old scenario, if you like). For the purposes of good balance in the game, rules recommend to remove few copies of old cards. Additionally, game offers a new starting equipment – a sickle. This new weapon is dealt to each player’s hand, but each participant may keep only five of his choice from overall supply of six starting cards. And every choice is a step in the right direction.

Since this is an expansion campaign, difficulty has risen. Prepare yourself for the fact, that this will be no cakewalk. New enemies are harder and more interesting. Ghosts are adding new options. Everything works great and looks even better. And the time has finally come to spend many hours with new great-looking pieces and interestingly written scenarios (nine trips each about an hour long). And these can be repeated without any problems and growing old. 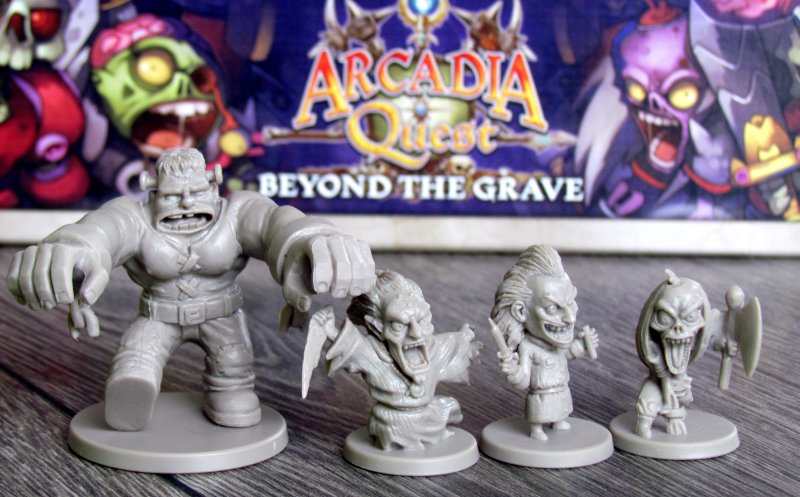 Expansion Beyond the Grave has no reason to change anything fundamentally. It subtly forks the game forwards and adds additional features, that will guarantee an even richer and more interesting experience. Detail processing of components and minor enhancements make this box perfect choice for fans of the original Arcadia Quest.

- virtually the same as the original game (and is this even negative?)

Arcadia Quest: Beyond the Grave is an expansion, that takes us to brink of the dead. We come across many creatures, who should have been dead long ago. But they're not. And it is up to us to fix it. But the monsters are harder and missions are even more interesting. The real quarrel will be between players for victory. In addition, changes give players new instruments to gain an advantage over others, but also hurt them by moving their pieces back to the start. The game is a little more random, but becomes even more insidious and malicious, supportive rivalry. Arcadia Quest: Beyond the Grave definitely goes in the right direction and you get new nine stories, which can be truly enjoyed to the fullest.