Review: Ark of Animals – this is a place for everyone

by Dušan on 12. 11. 2014
0
previous article
Preview: Nord - only warriors may enter Valhalla
next article
Review: Le Fantome de l'Opera - Phantom of the Opera on stage
Contents 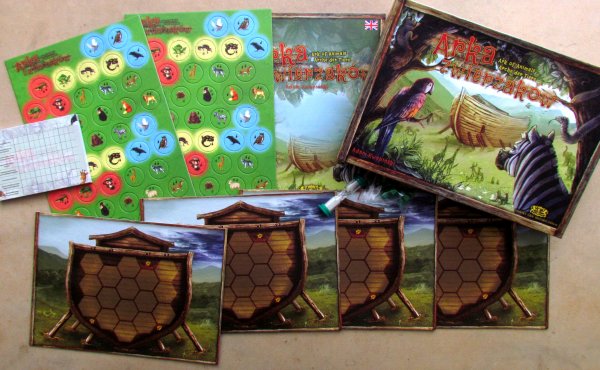 Water is everywhere. Yesterday, I had to run away from my burrows and a moment later from the whole woods, where I have lived since my birth. I met dozens of other animals on a small promontory. Nobody wanted to continue running, although it was clear, that water will soon surround entire hill and there will be no escape from there. So I left them, walked alone and met a hedgehog, who first told me about a possible rescue. Somewhere in the distance, there is apparently a boat and a man, who can save us all. His name is Noah.

We will set out to him, because we sense, that he needs help. This allows us board game Ark of Animals from Historical Game Factory (Sigismundus Augustus – review). The game was created by Adam Kwapiński and illustrations are work of Iga W. Grygiel, who has his fingers also in other games of this publisher. The whole fun in the box saw the light of day in the spring of 2014 for the first time.

On the lid of the box, we see a zebra with a parrot, watching in disbelief wooden creation in their valley. Multitudes of other animals are walking towards it: giraffes, deers and rabbits. Four player boards are waiting inside and all are the same: showing a cross-section of whole ark. Its cargo space is divided into sixteen hexes, that need to be loaded cleverly. 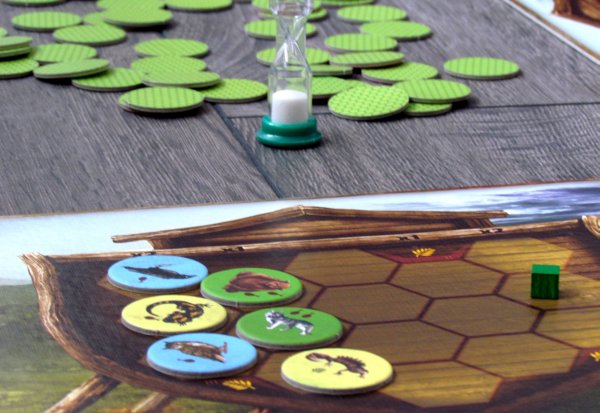 On these cardboard components are illustrations of individual animals and players have to punch them all out of sheets. In total, there is 84 of them, together with wooden pieces representing grain, one hourglass and notebook, where players will keep records of their earned points.
At the beginning of the game, every player of course takes one ship and makes it his. All other pieces of animals should be randomly spread on the table face down. No one should know their identity. Hourglass are placed somewhere near players and match can begin.

Players will compete simultaneously in each of three rounds. Simply start after a countdown and begin to fill ship from left column to the right. They can always add new tile only to leftmost empty column. When clock is ticking, everyone picks up one piece lying on the table, looks at it and decides, if its fit for his plans or not. In case he does not want to keep it, he simply sets it aside face up on the table. From there, any other player can take it for himself. Lifting is done only with one hand and player can always hold only one tile.

Once a player has filled his whole ark, he turns hourglass and others will have only that much time until end of turn stops their chances. After fall of the last grain of sand, round ends and players may place only last tile, in case they are holding it in hand. This action phase is followed by evaluation of animal distribution. 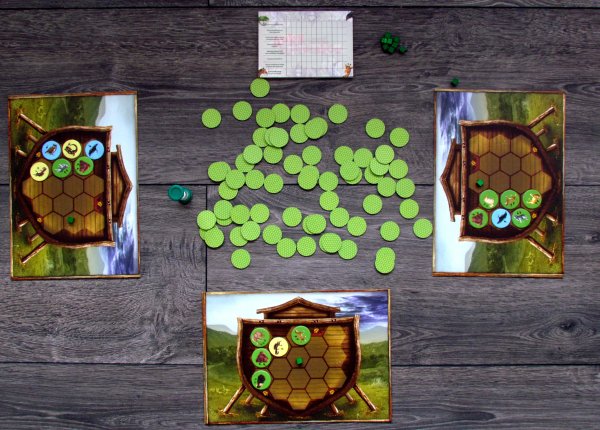 Arrangement of animals is important on The Ark. Predators immediately eat all neighbouring herbivores. Such victims must be immediately removed from player’s board and they will not bring any points to their owner. Other benefits will flow to players for a complete set of amphibian, reptile and bird tiles. Points are provided also to player, who ended the round and the one, that has most mammals loaded. After adding up all gains from the third round (thus filling sheet three times), winner is player with the most points.

Ark of Animals takes a one of the most popular themes (of designers). Noah’s Ark. And at the same time, there is also very popular mechanism (among players) of simultaneous performance – filling gaming boards according to some rules. It all started with Galaxy Trucker (review) and continued with animal Mondo. This time, we have animals among us again, but in a slightly different role.

Basically, the game is very simple and aimed at children and families playing. Therein lies the greatest strength of the game, because kids love to play with animals. Fortunately, however, difficulty of the game is very well scalable due to additional rules. So as players become more advanced, things that need to be watched in their ark is increasing as well. 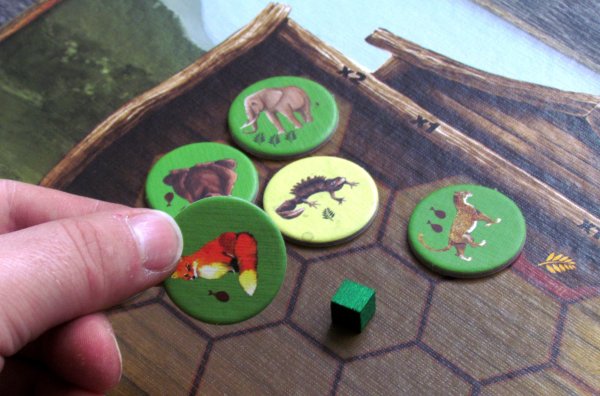 Players are not allowed to let animals eat food supplies on the Ark, represented by three wooden tokens. Gamers place those during early stages and thus determine their own optiosn for distribution of animals in rest of the round. Therefore, this food must not be placed anywhere near herbivores. Even more interesting is need to maintain a balanced ship. Weight of the animals is determined by number of food symbols (otherwise specifying type), which are added up for right and left side and compared. For any difference, a deduction of points will be made, as well as for eaten food tokens.

Rules described five levels of difficulty in total, which is really great for families. Children can grow as they play, improve and learn new rules, when they are ready. This option is truly appreciated about Ark of Animals.

Saw in each round is pushed by hourglass. Two points for first player, ending the round, are tempting, so everyone tries to be as fast as possible. However, actual set of animals around which everything should revolve is not rewarded sufficiently high and is often surpassed by points for the number of animals after removal of duplicates (same species is not allowed to enter ark twice). 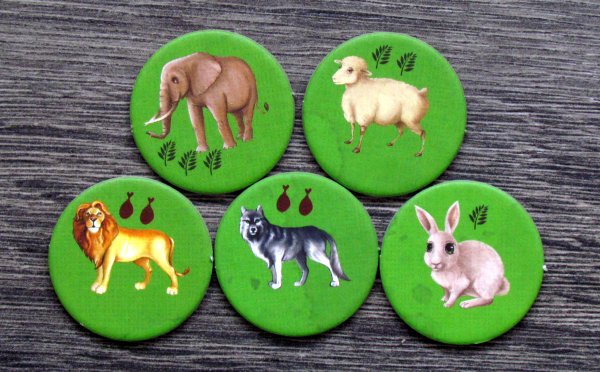 Filling sheets is really fast, because it takes place simultaneously and in real time. Players are just looking for the right pieces and must be able to decide immediately. Yet they are also limited by the possibility of placing only in allowed column. This significantly complicates their role and possibility to set tiles aside becomes really important. But you can easily give advantage to opponent, who can take desired tile without need to search for it. Sometimes you need it only a moment later and this can be infuriating.

Individual rounds take only a while, scoring is a bit more difficult and less clear. Younger children will need help of their parents. Three rounds are a good choice, because ten minutes are needed for one, getting us to overall thirty minutes for the game. And this can easily be shortened if necessary, by playing smaller number of rounds instead. Players compete only for tiles in the middle and everything works well in any number of participants and does not affect the game time. Although.. there is certain lack of interaction. 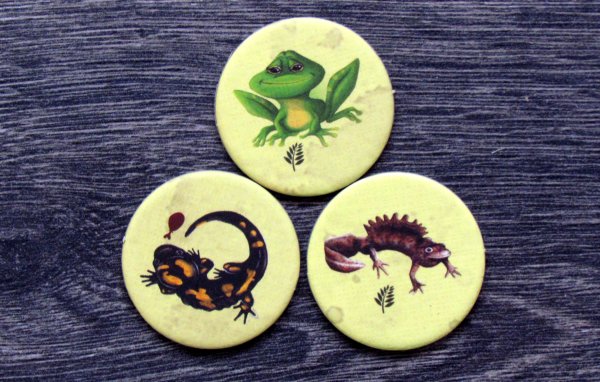 Ark of Animals is a nice family game, that is fun and comes with a very good gradation of difficulty. The graphics are simple and functional for a list of the different kinds of animals, which are also color coded. Ark of Animals board game can be recommended to those, who are looking for some simple fun for themselves and their children.

Ark of Animals is easy game for families. Even smaller children may start playing it from the easiest difficulty focusing only on placing animals. You can then easily add additional restrictions to the game as they improve, greatly increasing the difficulty and demands for tile placement. Players draw tiles from common stock and set aside unnecessary face-up, thus leaving them in open offer for opponents. Game takes place in real time, players are searching through tiles at once and length is reasonable for such a game. The biggest issue is scoring, that kids often can not handle by themselves. Otherwise, Ark of Animals is a succesful family game, that lures children in and will not disappoint parents.