by Dušan on 23. 03. 2015
0
previous article
Review: 15 Días - family is everything
next article
Review: Terror in Meeple City is Rampage - raging monsters everywhere
Contents 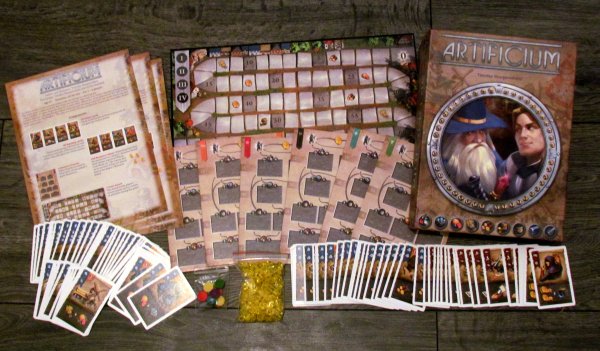 Some say, that the art of transmutation one thing into another is magic. I say, that it is science. But with everyday usage, even spells wear off and new procedure becomes boring and ordinary part of our lives. So people get old and tired even out of exciting news once. Fortunately, their lives also depend on many of them.

Board game Artificium tells story of the production chain, which perhaps once was a huge novelty. But now is not surprising, that you can input wood or grain and transform it even into a forged sword. Its author (including illustrations) Timofey Shargorodskiy knows it very well. His board game was published by Russian company Boardgames Lifestyle Ltd. in 2014 at the fair Spiel in Essen. In thanking, you can find even name of Alexis Desplats, who is associated with Asmodée company nowadays.

Classically elongated box surprises us perhaps with a picture of a magician and a prince, who look a bit as Gandalf and Prince Charming. Under this glossy circle, all raw materials are drawn in a row, so you know, what to expect. There are nine of them. But before you look deepr inside, you discover rulebook in the first place. It has surprisingly only four pages. 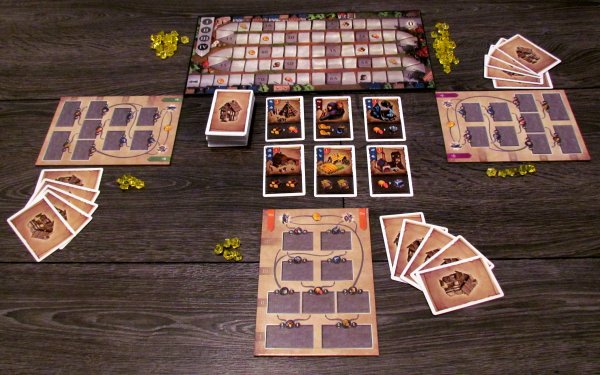 Just below them is one scoring board (with turn counter) and six resources boards belonging to individual players. On them, we find a development track, which leads from golden coins to the final product and back again. In compartments hides a hundred stones serving as raw materials. Their glittering appearance can take shape of any object, so its true identity depends on where you put it.

For players will be equally important also the cards. Twenty do some actions, although they do not offer any reward, but somehow intervene to alter development of the game. In contrast, remaining 88 cards of buildings lead to production, in which new product is created out of one of the raw materials. We are missing only six wooden tokens in player colors and stickers intended for them with one time counter.

At the beginning of the game, each player takes one board with a production tree and token of his color is placed on the zero position on the scoring track. This board is then put a little aside, but somewhere, where all have it in sight. Each player gets five stones, which he puts next to his board. They represent money, when placed like this. Everyone is dealt five cards, they will start the game wtih. The rest of shuffled cards create drawing pile. 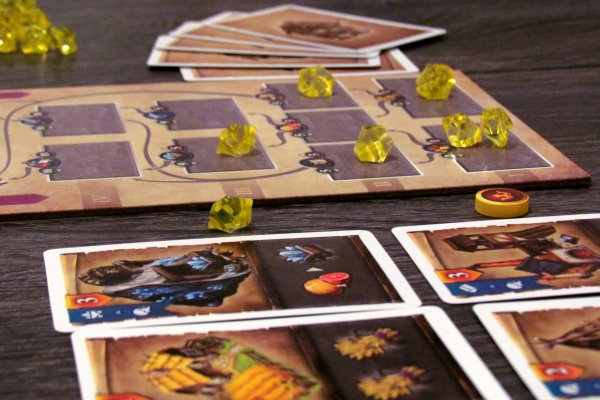 At that moment, players will visit the market together. It always starts with range of six cards. Gradually, everyone takes one. It is possible to choose also another card from the menu, but players have to pay two gold coins for such purchase. Instead of the first free purchase, a player may decide to replace all cards in his hand and draw new ones.

In the next stage, players take turns again, but this time they will be playing cards, they received. By doing this, one product usually becomes a new, better one. Exceptions are action cards, that allow players to draw a card from hand of opponent or somehow get more money. Each building card has beside transformation effects also its value in victory points. Player gains them immediately after playing it, if he is able to activate it.

Each additional round, players draw cards, so they hold five in hand again. Then you only need to specify new starting player depending on the number of points. Who is behind can begin. Rivals will go through four rounds of production and playing cards before they arrive to the finish. Here, number of victory points decides, after players sell all of their resources and finance in exchange for points. 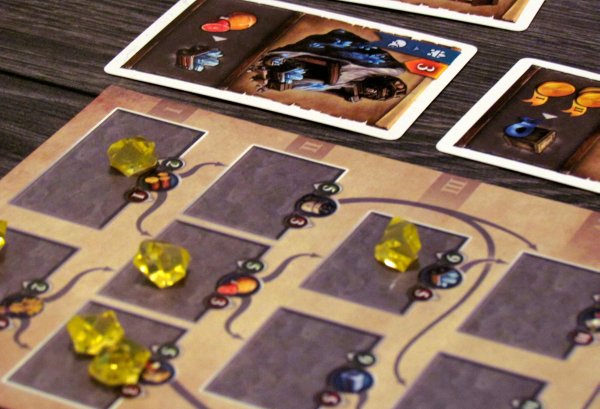 Artificium is about chain of production, and it us reminds of Craftsmen (review), but that game was much more complicated. This game essentially strips everything to the card essence and any remaining boards are used here only to monitor the status of the game. Everything comes down only and only to interactions with cards.

This makes Artificium a surprisingly simple game, in which everything revolves only around cards and continuity requirements. It is these flowcharts, that may provide a great show and great functional things as we were shown by game The New Science (review). And Artificium takes only the most necessary from it and creates very clear gameplay.

This simplicity is a weapon, with which the game is trying to attack us and it managed to do so. A whole experience depends on what you expect from it. Because it says, that you will be in charge of the production cycle, you would somehow assume to have any effect on it. Sorry to disappoint you here, because luck plays crucial role in this game. 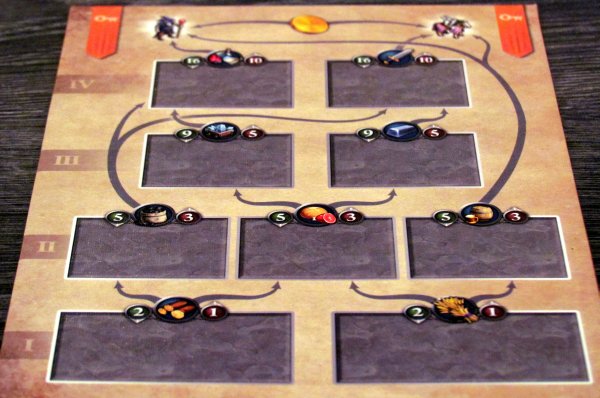 If you do not get good cards, you have only small chance to stay competitive. There is a reasonable chance to exchange them, but this is making you to stay away from the real action or costs you money. But that is not all, because what completely spoils the whole game, are action cards. You can build whatever you want, but if the opponent plays theft at the right time, you simply can not defend against it. In addition, scoring board rewards players for advancement, so richer ones become even richer.

Best feeling in the whole game is to create combos of cards in your hand. Although you need luck to do so, but when you succeed in such series, it will be really happy moment for you. To follow stones as they move across the tree and gradually transforms is simply delightful.

In a larger number of players, game is everything even more chaotic. It is best, paradoxically, with two, where the chances of malicious stab in the back are not so great. But even here, game does not shine as well, so you would immmediately like to repeat this thirty-minute duel. Four rounds clearly delimit the game and thus ensure a swift end.

Game has nice treatment. We should positively evaluate the clarity of the tree production in first place, although every action leads to constant shifting of stones. And this is, what many players do not like.

Artificium is a well done easy game. It has managed very well to simplify the whole process of production and its consistency. Everything is handled transparently, and the game does not last for very long either. But even that can not justify, that all success depends on luck and on whether you just will not become target of rivals envy. If you do not mind this sabotage, then you might like Artificium for its simplicity.

Artificium eventually left its efforts halfway. It managed to build a tree structure of manufacturing and its clarity, but its knocked down by completely unnecessary lack of control. Coincidence is everywhere and players themselves can completely destroy each other achievements. There is enough action cards in the deck to make all participants disgusted about the match. This is especially striking in a higher number of participants, when the game is pretty chaotic. Artificium was able to demonstrate simple fun, that sometimes pleases players, but there is distinct lack of control ruining everything.