by Dušan on 07. 09. 2015
0
previous article
Review: GodZ – guide how to choose right god to worship
next article
Review: Bedpans and Broomsticks - escape from a retirement home
Contents 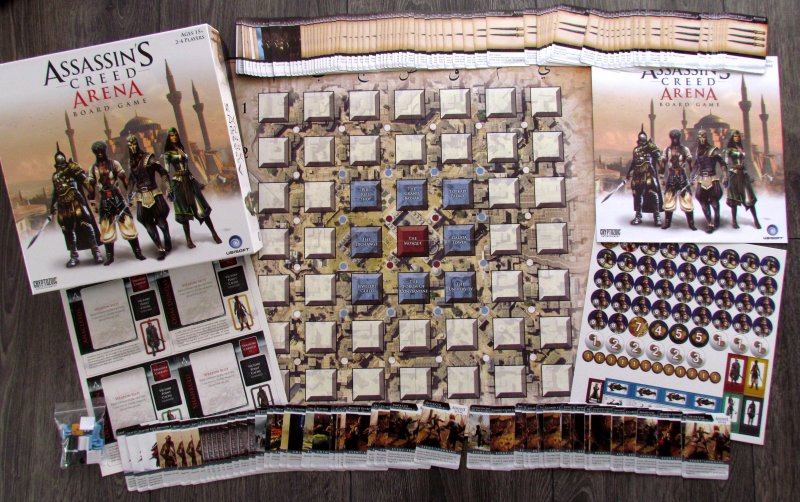 There’s nothing better to get close to your target quietly over the roof. Unsuspecting pawn is looking for danger around every corner and in dark alleys, but he would never have thought to look up. My lined shoes do not make any sound, like I was just wind in hair of my victims. And that is precisely the last thing they feel – a gust of cold air and death. It’s my blade intersecting their neck. Their meaningless life is over and my mission is a little closer to completion.

Such atmosphere is hidden behind board game Assassin’s Creed Arena: Board Game. Cryptozoic Entertainment and more specifically Matt Hyra (DC Comics Batman vs Joker, Food Fight) has created it under license from Ubisoft. This means, that in 2014 came a board game, that gives hope to all lovers of digital games, that would like to play with their favorite killers home on table.

White box indicates, that we should not expect large amount of blood inside. Indeed, even artwork itself is based on more silent stealth topic, rather than mindlessly killing enemies. However, already on the cover, we see all four characters of Assassins. We need them to explore and serve clients on big folded game board representing the city. Each square of the roof is a house surrounded by maze of alleys, which can be patroled by guards. 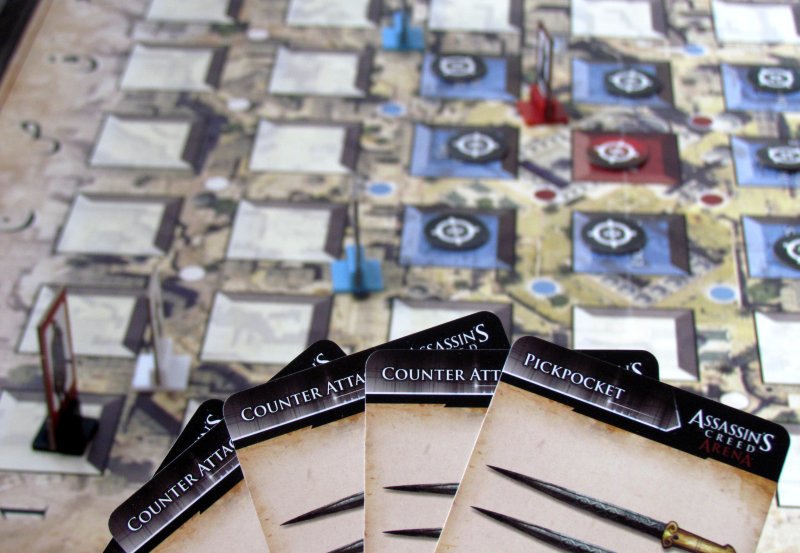 Players will become one of the cardboard pieces in the stands. Well, heroes, that are printed on them. Similarly, players will look at their human targets on the bottom of the box, which are also made of cardboard. And then there are many goal chips (divided by location into external, internal, and those in central mosque) and small round victory tokens. Main one for every assassin are cards, whose merit is to allow them to move and perform all their lethal operations. Ninety of these cards are not everything, because further sixty cards represent events.

At the beginning of the game, players should deploy their targets randomly over the central nine fields on board. Roofs of houses in the middle are all occupied. Smaller guards take their patrol in the corners, and common targets (36 round tokens) assume position next to the board, face down. Each player chooses a character, stands his figure in the corner closest to him and gets five cards in hand.

Players alternate in control of their murderers. Any such turn starts with revealing one event card, that affects situation on the battlefield. Players can be forced to add new enemies or move some of existing guards. Only then can active player use a card from his hand, not only for the purpose of movement, but also as an attack. 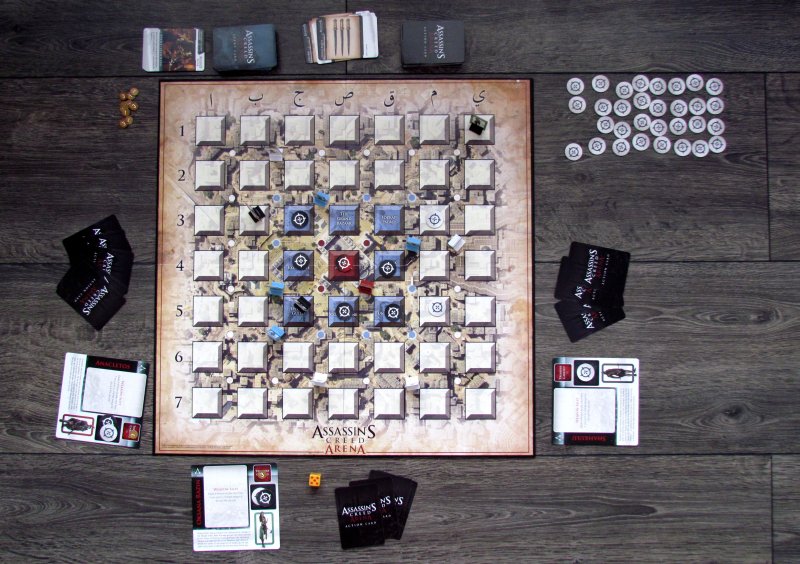 This option is up to the players and they can always choose only one option. Only some of cards allow movement and show distance, that can murderer walk in their text. Movement over rooftops is allowed in all eight directions and players are always trying to gain some advantage from it. But when jumping from one house to another, they need to pay careful attention to the guards. They can catch a glimpse of the player and each such disclosure is worth one card from player’s hand.

When attacking, players take advantage of daggers printed on the card. Most of them allow to attack opponent, but some of them are used as counterattacks. A little luck of the draw is needed then. Number of daggers on the cards must be sufficient to overcome defense of that particular guard, which are getting stronger, as players get closer to the centre of the city. Heroes can attack also each other and in that case, also challenged hero has to discard a card from his hand to defend.

This is very unpleasant, because these cards simultaneously represent points of life of that character. Once the killer run out of cards, its over. Fortunately, it means, that he will appear again in the corner of the board next round and only loses any tokens, he was carrying at that moment. Even so, its not good news, because these treasures are the true meaning of the whole game. 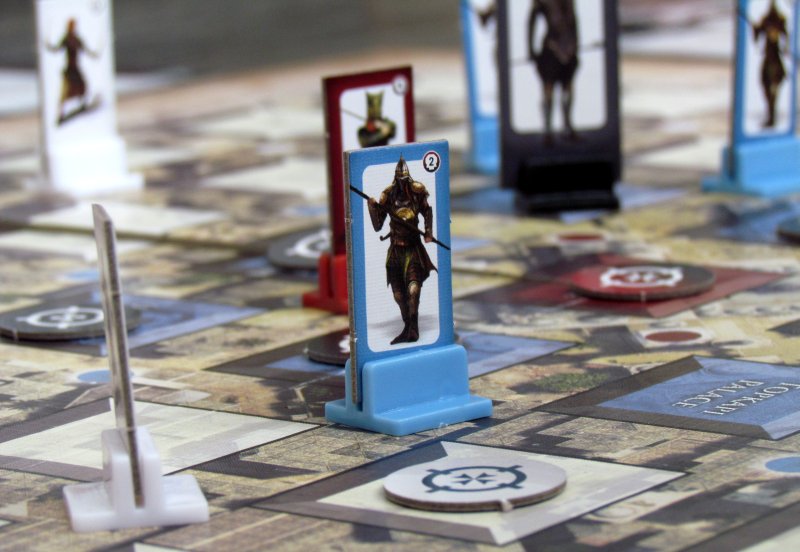 Fortunately, players have opportunity to sacrifice their turn and rest instead. This will allow them to get some new cards in their hand. But its amount depends on their position on the map – the closer to the center, the harder it is to hide and rest and recover their strength (= less cards to draw). Game ends, when one player acquires fifteen victory points, which can be obtained not only for getting treasures, but also for murdering another player.

Assassin’s Creed: Arena will be a bit different game, than fans of its computer game incarnation are expecting . This is a racing game full of conflict, planning and chance. But we will discuss it all gradually as those impressions came to us.

So, first of all, game largely depends on cards you are holding in your hand. We do not need to explain to you, that this greatly relies on luck. At the beginning, players have five cards and have to work well with them, because they can only get more by resting. And such losing a turn is not pleasant at all as you can only watch others moving forwards. 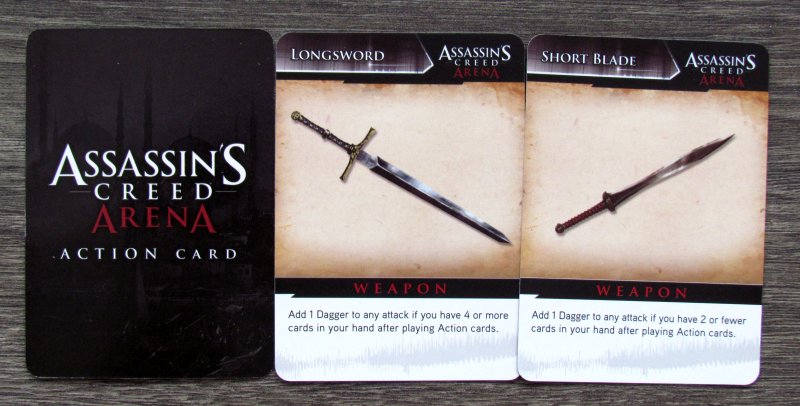 Cards can be well used to plan ahead. Movement of the guards is governed by events at the beginning of each turn, but their viewing direction is obvious and usually assassings can avoid being seen. In case they are not in a hurry. Then, any caution goes away. Exactly, how you would expect with game, that is about killing enemies from nowhere.

Fundamental concept of tension throughout the game are lives, that are represented by cards in hand. Each card played (for an attack even more can be used at once) costs player some of his energy, which must be from time to time supplemented. Fortunately, no matter how many hits you take, there is no player elimination, which would certainly be bad. Here, player are only restored in a corner and can go back into the maelstrom of battle.

Players go for victims located on the board, but also are trying to kill each other. Conflicts happen in the game definitely quite often, although board looks big, killers collide quite often. Thus, especially in the event, that more opponents participate  in the match. This testifies for playing with larger numbers. Game of two is more of a race (pick up and deliver), which determines experience. In more opponents, it is necessary to maneuver better. Game time is fortunately not affected and half-hour gameplay is one of main advantages of this game.

Processing will not offend, but certainly will not excite. Above all, game board looks really plain. Actual quality of the components is fortunately good, but those figures could probably be some plastic pieces and not only stands with a cardboard tiles inside.

Assassin's Creed: Arena is a good game, that is surprisingly lightweight and accessible. And not just for fans of the original digital series, but surprisingly also to other players. Sneaking works very well and guards on the roof will notice you, when you are not paying attention. Players can go at each other's throat, which works well in high numbers, but plan is too empty in two. Graphics does not help the overall impression, but fortunately everything is improved by nice game time. And despite significant impact of chance, experience of Assassin's Creed Arena is a nice refreshment of your daily killer routine.