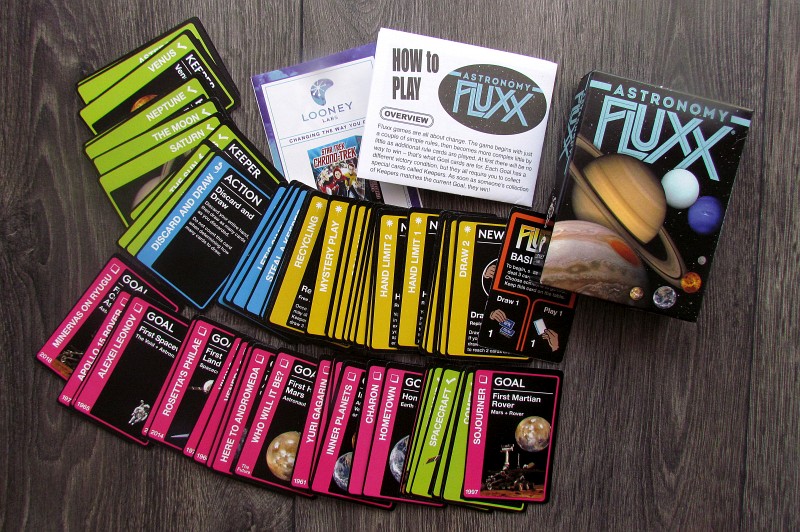 A lot of things in the universe looks random. Meteors fall as they please. The planets are seemingly scattered across the sky without any logic. But behind everything there is a hidden systém, that controls everything. And yet a pinch of uncertainty must be brought into this world. And that’s why Fluxx is here!

The last word of the last paragraph gives little room for doubt. A new variant of the Fluxx card game is coming to us, this time called Astronomy Fluxx. It was created by the guru of these games, Andrew Looney, and under the auspices of his company Looney Labs, it was released in 2020. The game enters the European market thanks to Esdevium Games. The game came from the United States and is decorated with the name of NASA, which gave their licenced pictures for each card. So there is only one question left: will it be astronomically fun?

On the lid of a small black box, we see Saturn and other planets. Hiding behind their large circular bodies, there is a set of hundred cards, that are now stylishly all black. Thanks to that, it hides nicely in the darkness, that is up there and all around. 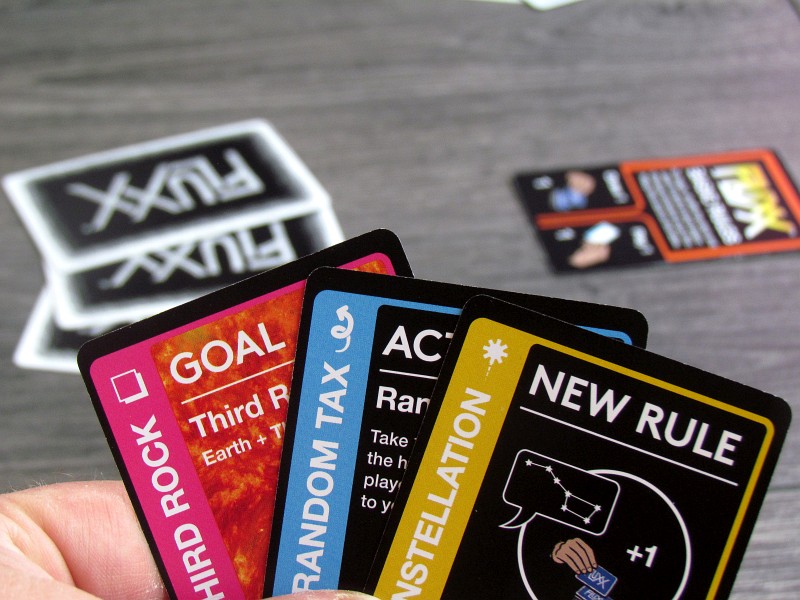 It all starts with the players revealing the basic rule card and placing it in the middle. They shuffle the remaining deck and deal three cards to each participant at the beginning. He keeps them hidden in his hand, and when it’s his turn, he draws a new card from the deck and then plays one of his four cards. It may be a one-time surprise effect (blue action cards), but it is much more likely that the card will lie on the table for some time.

This is because there are keepers, which are marked in green and players are the only ones to store them in front of them, publicly displayed. These reinforcements are very important and in this case take the form of various planets, moons or space equipment. In the middle of the table, players will lay out and replace (usually there can be only one active) goal cards, which always consist of two or three pictures, that the participants should have in front of them. And that’s exactly what it is all about, because whoever manages to have the complete set of keepers required by the goal card, becomes the winner. 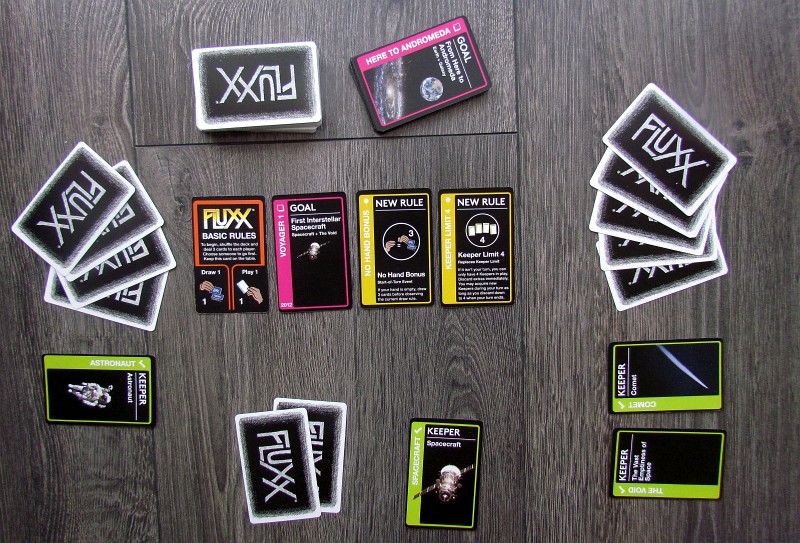 Above all, the game process will get constant changes on the way to the rules. These are taken care of by yellow cards, which after being played tend to change the basic rules of the game. They can set a limit for the as yet unlimited supply of cards in the hand, allow players to draw more cards at the beginning of the turn, or, conversely, force them to discard more cards. But whatever the development, the goal is still clear.

Like the universe, Astronomy Fluxx is a place of constant change. A game in which not only the cards in your hand or on the table change, but also the rules themselves. And that’s why he has so many fans and opponents. You don’t actually have the game under control at all, because you often have only a limited number of randomly selected cards to choose from. Sometimes there is even a situation where players have to play and activate all the cards in their hand. They can then only determine the order of their evaluation. 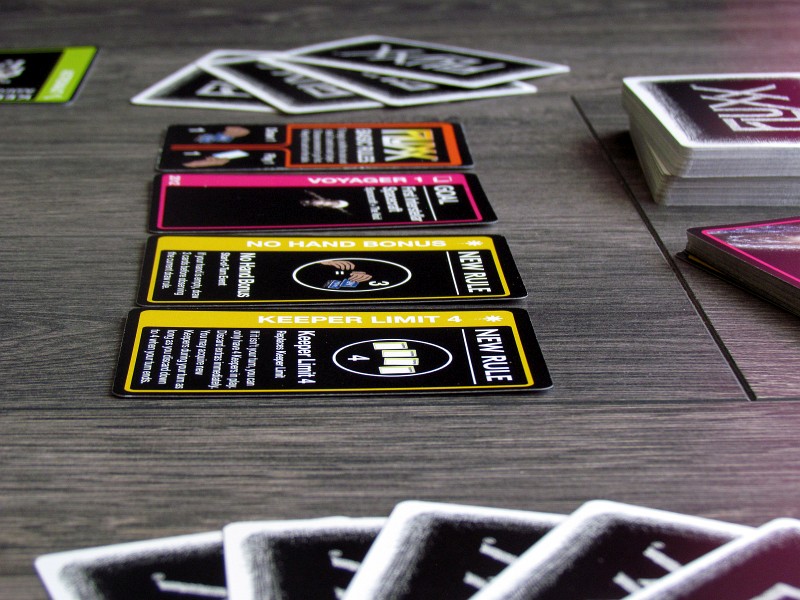 Coincidence is simply the centerpiece of this series, and it doesn’t matter if you play Fluxx with the subtitle Star Trek or with the theme zombies. There are no adversaries and enemies in the universe except the ubiquitous ice vacuum. Therefore, even in this novelty, there are no creepers, who otherwise belong to Fluxx, lie next to keepers on the table and prevent players with from winning.

The cards, in turn, offer several ideas that are thematically related to the universe. They will be interested in new rules that will allow you to move the planets to the center of the table (Central Axis) or their orbit between players. There may even be a telescope on the menu that allows you to look at cards that are not visible at first glance. But it’s not just the rules. Among the cards is, for example, Supernova, which will destroy all planets and spacecraft. 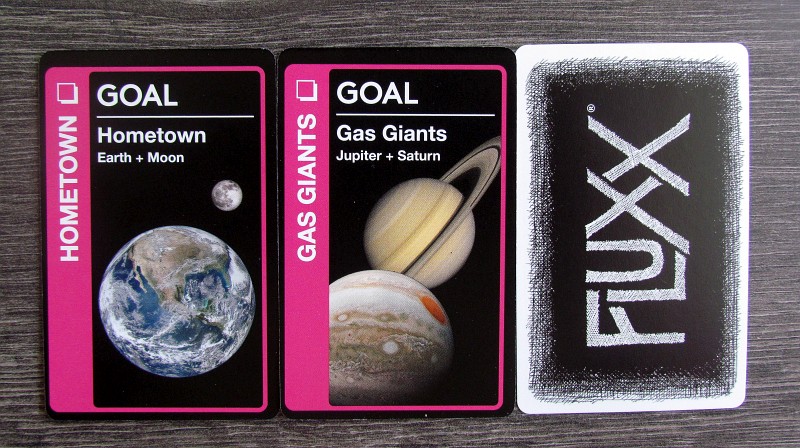 And then there’s one more detail. In the lower left corner of several goal cards is the year that corresponds to the historical date of the event. This is closely related to the Quiz Me! Action card, which allows players to ask for the year of one of the cards in their hand. Thus, for the first time, a light element of knowledge comes into play.

Also interesting are the goals themselves, that include, for example, landing on various planets in our system. All you need is provide the right space body and a ship. But you may also need a rover, a comet or you will compose a Kuiper belt.

We like the optimized rules guide, which is still on the fold-out sheet. However, the processing is interesting mainly due to the already mentioned black background of all cards. Thanks to that, the game looks completely different on the table. 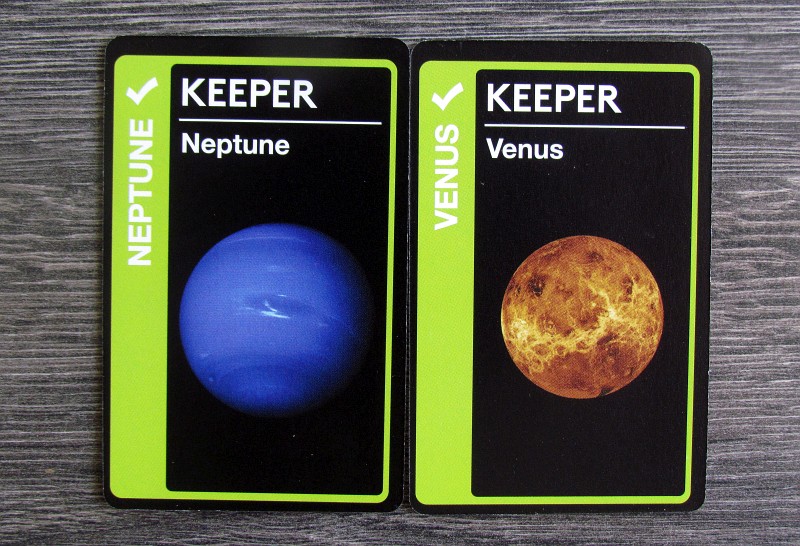 The Fluxx series has finally found its home and needed a box called Astronomy Fluxx. The universe is exactly, where it belongs. To a place where something is constantly changing and nothing is certain. A place full of mysteries. Openness and chaos are the main building blocks of this card game as well. The timing of the release of this game could not be better.

If you happen to be flying to the ISS, the Moon, Mars or even further and could only have one party game with you, then we will be happy to recommend Astronomy Fluxx, because it will not bore you. But the game also offers a number of small details and new ideas, that are perfectly related to the theme. And we are not just talking about a black look, but also about the historical dates on the cards, which express the author's respect for the conquest of space. Astronomy Fluxx is a delicacy with chaotic tinsel.