Review: Atacama Mining Conflict – how to get rich in Chilean desert 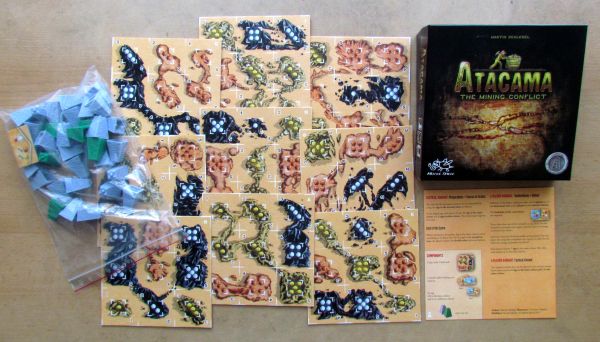 When I first came across golden vein underground, it was an amazing feeling. It pampered me with its golden reflections of light coming from my lamp and it was really great to look at. Already at that moment, I knew that my discovery will not stay in secrecy for long. I rushed to the surface only with first few trucks, when a competitor helicopter landed nearby. And here it is, race for richness starts right here and right now..

Fight for the country’s mineral resources intensifies. We are looking in less and less accessible places. Their hostile environment will require sacrifice, but a human desire for wealth is stronger, than reverence for life. Mining races were in history and will be in future as well..

While company Mücke Spiele (subsidiary of Spielmaterial) usually publishes games of beginning authors, usually winners of the designers’s competition, we now have an exception in front of us. Game called Atacama (subtitled The Mining Conflict) was created by an experienced designer, Martin Schlegel (Aqua Romana). Box arrived to market adorned with illustrations by Christian Opperera in the fall of 2013. 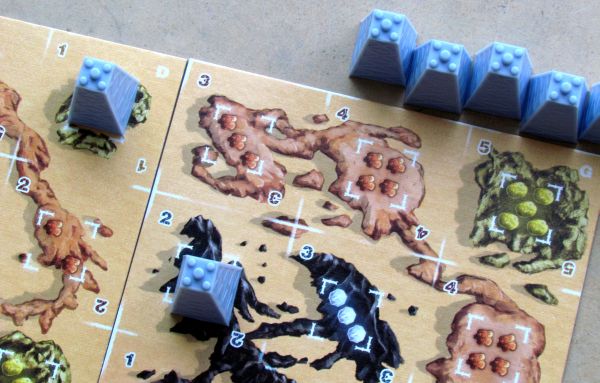 Game is hidden in a box ranging in color from dark brown to black, with a figure of a miner pushing a mining cart. Dimensions are unusually low, but it still retains a square shape with side exceeding fifteen centimeters. And while all vital components have to fit inside this little room, it will still catch us by surprise.

At the very top lies a booklet with rules, which is surprisingly short. Actual instructions for the basic game occupy one of the four pages of text, then you’ll get to a detailed example. On the other pages are written expanded options for advanced players.

Much more fundamental things await us under their thin canopy. We find a transparent plastic bag filled with mining towers. Most of them have a gray color on them, while few of them are green. All are hollow inside and are waiting for you to hire them. Box also includes a pair of cardboard pieces, that will represent player’s concession. 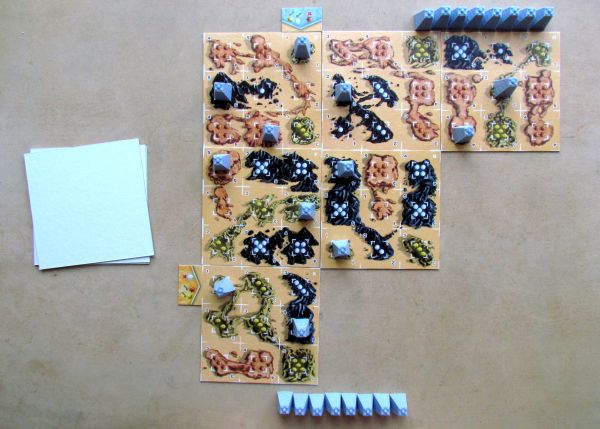 On the top floor, you will find nine panels, representing individual mining field, which you can visit with your machines. But their placement is not as easy as it might seem at first glance. First, we should emphasize, that each box has a place to build a tower with a certain number of raw materials available to obtain.

Each of the panels contains exactly nine positions and after their connection, you get a game board with dimensions nine times nine spaces to send your mining towers. In the basic version of the game, you should follow the order of letters printed in white text in one of the corners.. This way, we have actually already started the actual preparation of the match. Now is the time for each player to choose one license (tile), that simultaneously indicates, which raw materials should this player be interested in.

It is not a secret information, so each of the opponents puts a token next to rows or columns. Accordingly, it is also clear now, which groups will bring you victory points at the end of the game. You must split towers in half with your adversary as each player gets exactly fourteen basic gray machines. Green are not needed at all in the base game, so we put them aside for now. 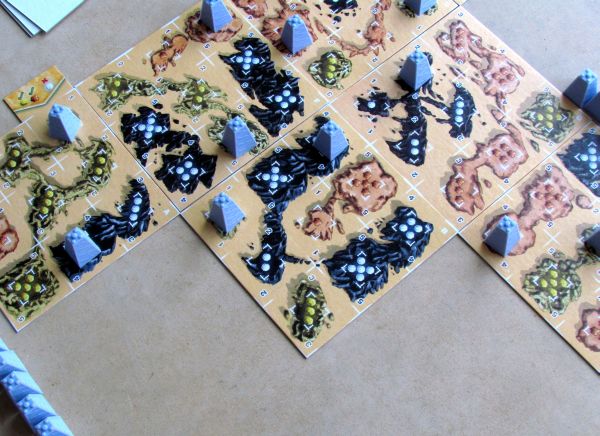 Each of the opponents has only one activity during his turn. Playing one tower to the game board and he can basically do this according to his wishes. The only restriction is, that no two towers can be adjacent horizontally or vertically. By occupying a position, you are blocking all the fields in the immediate vicinity and thus decreasing opponent’s chances to play.

Much more attention will you pay to your own profit, which is counted only at end of the game. This occurs, when players put all 28 towers on the board. Both opponents receive points each for something a little different according to the pictures on their concession. Everyone is trying to get two of the three available resources, while getting negative points for the third. You evaluate rows and columns one by one, but points will be awarded only for such area, where there is at least four towers (no matter, who placed them). Value of individual spots vary according to the numbers listed in their corners. After adding and subtracting all values, it is clear, which competitor is the winner.

Atacama is a solid game, in which you always have a complete overview of the situation and your chances. At the same time, you also have full control over development of the game and you can lose a lot by your own bad decisions. The game includes no coincidence. Basic version at the same time does not offer any variation at all, which means, that it will begin to repeat itself very quickly and you start peeking over to advanced version. 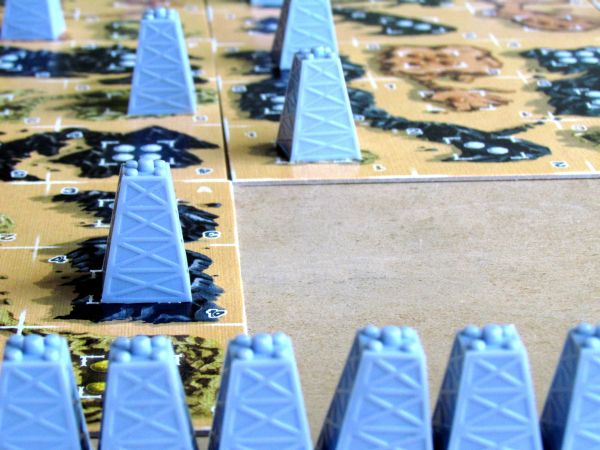 In the extended version, everything changes. Players do not get concessions at the beginning, but instead can decide for any of them in course of the game. But whoever decides first wins and the other player has to take the other tile, which is remaining. In addition, the game board has a random distribution of land and mining spots are revealed gradually. It thus ensures uncertainty in obtaining concessions in first phase of the game. But once new sites are revealed, first player in turn has a little advantage.

It’s not easy to choose the right time to get this tile. It binds in addition also to option to decide, whether you will cover scoring of rows or columns. Depending on the concession card with the arrow pointing in that direction (from the top or right). The player, who decides to go for it first has a noticeable advantage. But only, if he does not make bad choice.

Its that gradual uncovering of the map, which is an important element, that keeps the pressure and above all adds a dynamic, that basic version lacks. Players still have both the same amount of information and therefore the same chance, when placing towers. Thanks to this, also lack of significant variability disappeared. Game still looks and feels same way every time, but at least actual board is always different. 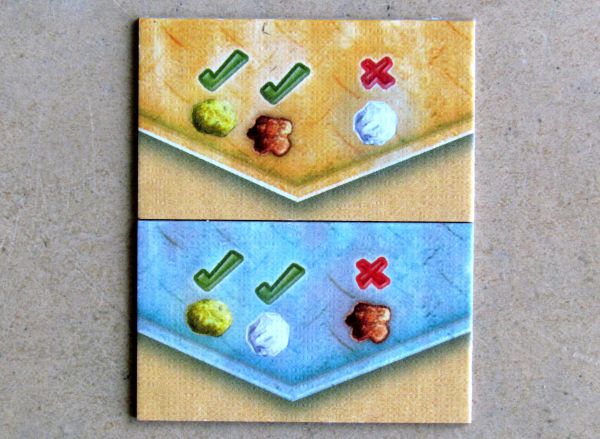 The game is fast, because placing of 28 towers is not time consuming. Clash usually ends in fifteen to twenty minutes, depending on how thoughtful players are. With the extra time, options for tower placement are shrinking, but you still have some decision to make. In this respect, its good to determine strategy at beginning of the game, when you can open or close the path to victory.

Largest negative remains a certain flatness of whole topic. Atacama is nothing more, than a logical game with restrictions of playing pieces and a new theme. Extraction of precious metals is nice topic and is supported by processing of nice plastic towers. But even that dispels the feeling, that the game is simply only about laying pieces on the table. And there are two types of players in gaming scene – lovers of such abstract style games and second half, who hate it. This should help you decide, where are you at with this game.

Atacama is fairly fanciful puzzle game for two thoughtful opponents. Topic of precious metals extraction is here only as decoration and gives precious look to the game with plastic towers. Yet a feeling remains in us, that the game is missing some indefinable spark. Even so, it depends mainly on your beliefs. If you like to compete in abstract puzzle games, where every information is public, the Atacama is one of many good options. Otherwise, we even do not have to explain to you, that such a game is not for you. But such players stopped reading this review already some time ago..

Atacama: The MIning Conflict is a logical game, where players are competing for finding places of precious materials. Only a part of whole location is explored at first, but every treasure seeker must correctly build his mining towers and based on their location select either rows or columns for his ownership and scoring. Whoever chooses first has an advantage, but also might make a mistake of too early choice. Its a game of nerves, just like in reality. Whole topic is interesting, although not bound to whole game too tightly. Game functions well, because its meant to be only a two-player fight. There are different variants in rules, some might even bring a little chance, but most of the time, players have control over everything. As map gets revealed during the match, it offers more and more space to put towers, but they are not allowed to be neighbouring with each other. Players are helping each other to points, whether they like it or not. Its only about being the more profitable in the end. Theme is simply pasted on the game and whole game misses a little deeper meaning. It should not bother you with abstract game like this, but it can still be reason for some players to pass on this game and chance to get their brains jammed. Atacama is an interesting abstract game with fair processing, some nice ideas, but lacking atmosphere.