by Dušan on 29. 05. 2015
0
previous article
Review: Krosmaster Arena Frigost - spells on frozen soil
next article
Review: Prohis – do you want to be a smuggler?
Contents 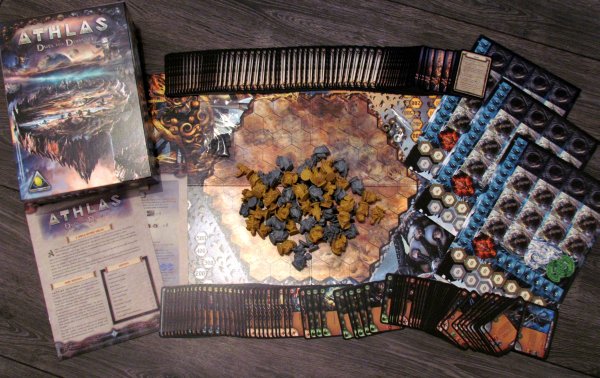 I was driven by desire to create my own creature. To affect its innate characteristics and give it a name was my reward. Alchemy, magic, technology, I learned it all and began creating my masterpiece. Creature I called Arkon, was beginning of what possibly came out of nightmares. Godly creatures come down to me and offered me a place in heaven as a appreciation for my deeds. They say, I only need to win competition with my creation. Test, which every new Athilian must undergo.

These battles will take place in a world, that is hidden in a cardboard box, far from sights of ordinary people. Its creator is Tzvika Harpaz. Golden Egg Games company has noticed his work and prepared its final form for release in late 2014 for beginning of the fair Spiel in Essen. They selected name Athlas: Duel for Divinity. Illustrations were taken care of by Antonis Papantoniou.

Game is hidden in a medium rectangular box. First of all, there is a carefully folded game board, that represents a deserted world. A place, where creatures of players meet in their final duel. Space is bounded by six sides and consists of many hexagonal fields. At both upper and lower sides are also counters for magic points. 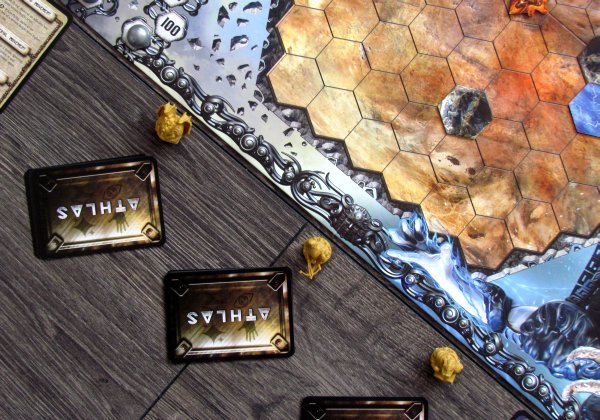 Main component of this is cards. There are a total of 170 of them and are divided into two halves for each opponent. Nine cards are basis for beings called genus. The remainder is divided among available skills, that may be represented by equipment, skills or spells. Another nine cards are devoted to divine interventions – action cards.

Furthermore, players will also need miniatures. There is a total of 64 of them. Both players get same set of four different figures only in their own colors. Also a number of cardboard components is needed to play the game – namely a six-sided terrain pieces, tokens of vitality points, relics and numbers indicating summoning cost. Horseshoe shape tokens are used to mark state of monsters. There are also stones utilized for marking points on scale and small cubes needed to activate certain capabilities.

At the beginning of the game, players choose one of two available colors and get matching set of cards and miniatures. They deploy terrain and three relics (which are their goal) on the map between them. Everyone places one stone to zero indicating magical energy consumed. Regarding mana, it is necessary to agree on the maximum, that can be used. All other components are piled next to the game board. 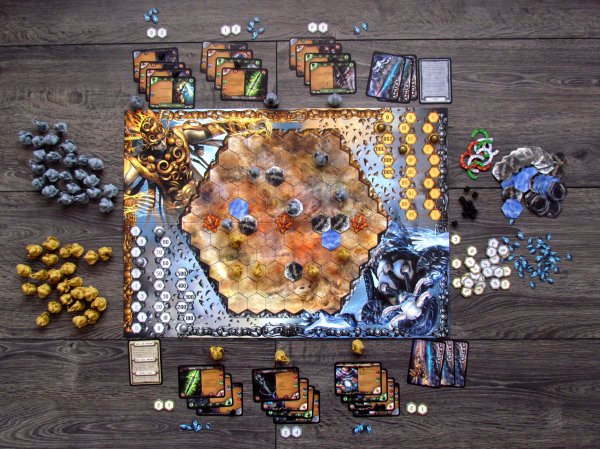 Big part of the game and experience itself is creation of monsters. Each player can and will create three alphas, whose foundation will be any of available genus card. Observing the rules for combining capabilities (for example, monster must have never carry items needing more hands, than it has), both rivals secretly try to create such a creature, that could lead them to victory.

There is no maximum number of cards, but with every additional feature, difficulty of its summoning also increases. Cost for each skill is marked directly on cards in their lower left corner. With sum of these numbers, players (first secretly) mark each of their three piles. This number will have to be payed, whenever they want to summon a new representative of that type. This preparation also includes selection of four divine intervention cards, which puts players in front of him. Order of cards has to be selected now and cannot be altered during the game!

Battle itself then starts. One of the players will summon monsters (either one or more up to maximum of 60 magic points). Their identity is revealed to enemy, when they are first summoned. At that moment, opponent has opportunity to go through the cards and check, whether they all adhere to rules and also to become familiar with skills for further progress. 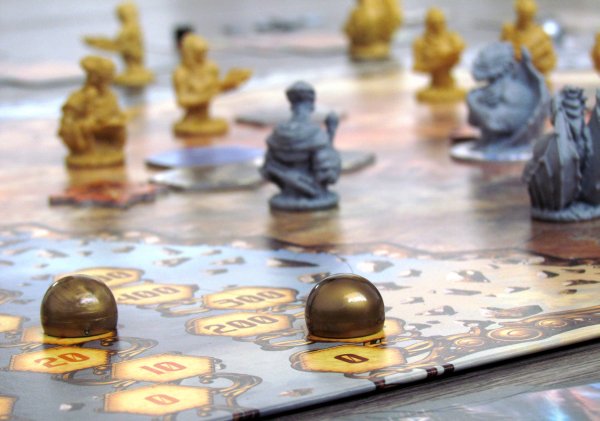 Each alpha deck becomes a true creature, that receives life points equal to total sum from its genus and bonuses. Some cards will also be using cubes, which will later have to be payed for activation. Player must also choose one of available four pieces, which will represent a monster on the board and that it in his eyes the most similar to that creature capabilities. One is placed near the deck, while second goes directly to the plan on starting position.

Each turn of a player (opponents take turns) consists of activating unit and possibility for new reinforcements. Centerpiece of the whole game is therefore understandably miniatures, which can spend action points (denoted A) and movement (+). To move to a different terrain level, player has to pay addition move action.

But most of the time, players will try to activate some abilities, that they assigned to monster at start of the game. Such cards have always price for activation printed before text description, which in addition to action point may need usagee of cube (which was placed here during summoning), which limits the number of activations of this capability. These cubes are shared among all creatures of one type. 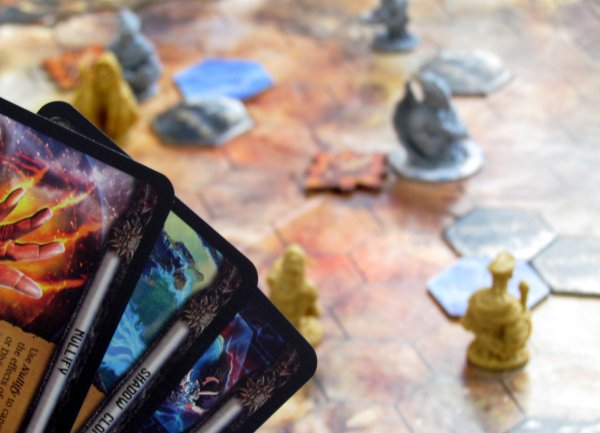 Creatures can attack each other. At that moment, players take into account not only range (if it is a ranged attack), but will mainly be comparing monster attack against defense of its rival. Magical armor then helps agains attack spells. Remaining amount of points has gone through and has to lower life. Whole amount is shared among all units of the same race. After last life token is removed as result of a hit, only one of creatures dies, while number of lives is repleted back to a maximum for remaining ones.

When specified limit of magical points does not allow players to summon any more creatures, game is coming to an end. Both opponents are constantly trying to get two relics for their side. But this is not enough, because to open gate to another world, it is necessary to have them both in one place and therefore, held by one creature. Once player succeeds, game ends immediately.

Athlas actually looks like a classical and common skirmish game, in which players cut into each other indiscriminately and struggling to gain relics on the map. Recently, we reviewed game Spells of Doom (review) with a similar topic. Still, these games are very different from each other. The reason? Creation! 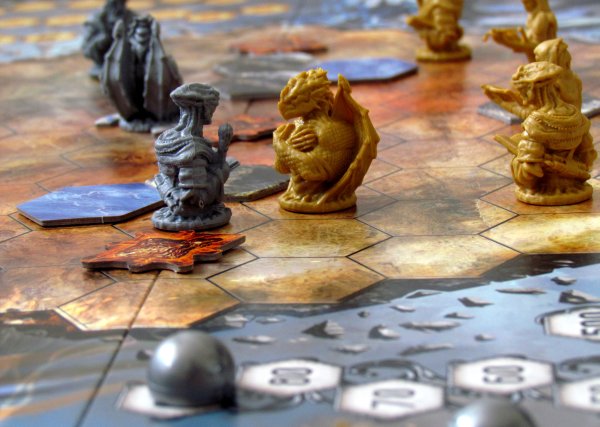 Players have unique opportunity to combine cards from their deck into any creatures, that may for example have three hands – holding a sword with one, while shooting a crossbow in other two. There is enormous amount of cards and options and despite the fact that, both sides have same cards at their disposal. Creation of characters becomes regular phase of the whole match and it is vital on your road to victory.

When choosing a card, you of course do not know, how your opponent alphas look and what they are capable of. Therefore, each battle interesting. Due to possible creation, you can even create house campaings. For example, winner can not alter his own troops and must defend his title against an opponent, who has opportunity to rebuild one alpha based on battle already lost. You can then play through the campaign of several matches and determine true winner after several paybacks.

Only surprise in the whole game are represented by divine interventions. These three cards chosen at the beginning of the game can be played at any time and surprise opponent at least a little. Again, offer includes wide range of cards for different purposes. 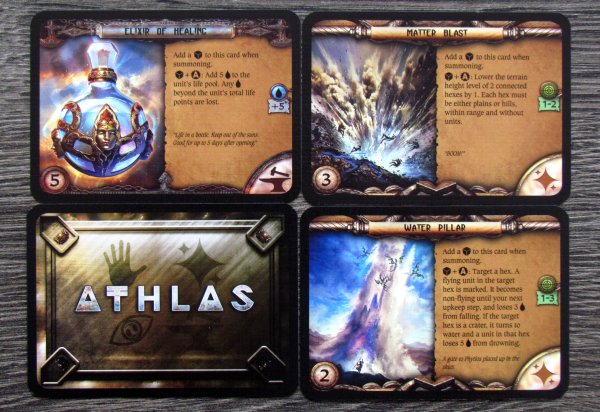 Control unit itself is very simple. There are no special rules, but players must have a good grasp of the capabilities of their creations. Their frequent usage is essential to victory, for there is no shortage of magic whizzing overhead. Armies often count more units on the board. Here, perhaps the only special rule is hidden, that is not explained easily – all soldiers of one type share one life pool, which is initially slightly counterintuitive.

Main problem lies with teaching new players. Rules alone are explained easily, but they will hardly win duels with more experienced players. Therefore, Athlas: Duel for Divinity is especially suitable for stable gaming pairs. This (as well as customizing options) resembles us of Mage Wars (review). But this game is still much simpler and less complex.

Game can be played in only two opponents or players can split into teams and control only some alphas. Even then, battles are interesting and enriched by whispered tactical negotiation. At the same time, these team fights also last longer. Usual gaming time of Athlas does not exceed one hour (watch for the alpha setup times!), because individual rounds pass quickly. Then, you will not mind, that movement of troops is rather slow, because players are constantly alternating. In addition, you can set your own time (shorter / longer), if you change number of target magic points. 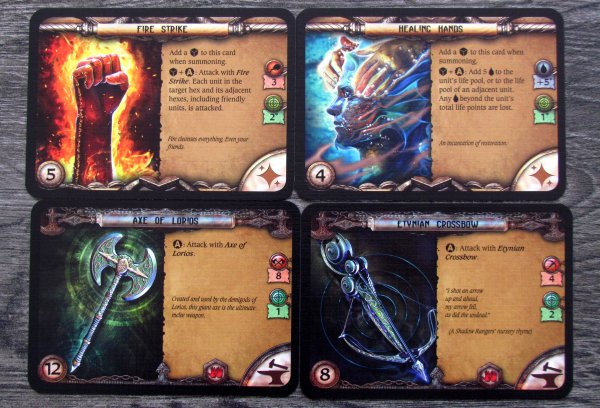 Athlas has simple rules, but it is not easy to start winning in its world. Players must know their cards and be able to create functioning combinations out of them. Now, exploration of their combinations is basis of fun. Battles are then actually such tests of your skill combos. But very tactical and interesting test without the intervention of luck. Athlas is just really interesting, well managed achievement, which inspires all, who love to create something, while they do not mind a bit of fighting on top.

- newcomers have no chance against experienced players

Athlas: Duel for Divinity is really good and fun game. Positive impression now consists of two phases, which are significantly differentiated. First of these is creation of characters. Players can select their skills out of many cards. Individual patterns are combined into true figures, and can have any number of properties assigned. The stronger the unit, the less of them will player be able to summon during the game. The fundamental problem is game with less experienced players, where newcomers clearly have a disadvantage. Very successful processing including miniatures and illustrations on the cards make up for it. Athlas: Duel for Divinity is worth attention, because where else can you build true creature to your liking?

by Dušan on 23. 10. 2020
Deep below the ocean are sources of hot water flowing from the earth’s interior through many cracks. These are places, where the human foot has not [...]

by Dušan on 23. 09. 2020
How many people can attend a tea party? There can be a lot of people sitting at the table, but for a real experience, you need only two. Only in this way [...]
Comments
Leave a reply