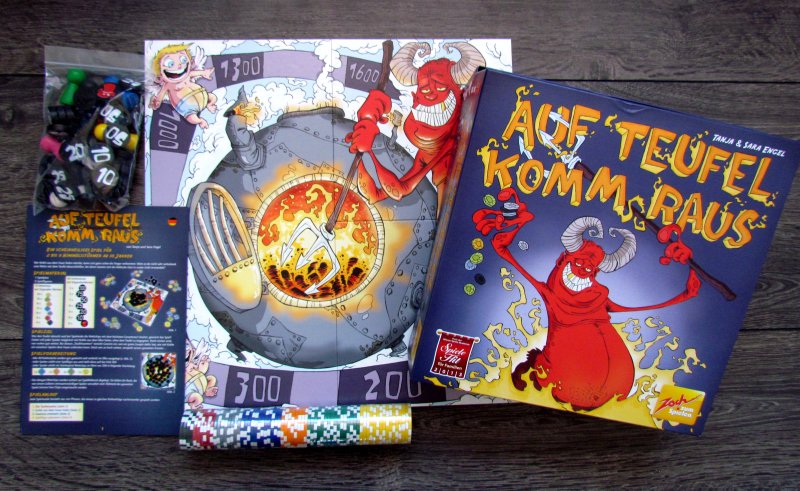 Lots of gold is hidden in hell. But taken it out is just not easy. It would seem, that all it takes is to reach out and become a rich man. But all these coins are red-hot, and there are not many ways to get them without getting injured. It is much easier to conclude a pact with the devil. But we did not want to do it and we prefer to play with him, hoping that coins get cooler in the meantime.

We may embark on a visit to hell, thanks to board game Auf Teufel komm raus, which was created by Tanja & Sara Engel. It is published by Zoch Verlag and it originally comes from year 2013. Its illustrations were created by Benedict Beck.

Image of a laughing devil can be found on the box. He is excited, invites us all in, because gambling and risk-taking will be his own profit. Fires of hell can not deter us and so, we dive into a square box, that holds cardboard game board folded into quarters. Hellish furnace of fire occupies the largest space on it. Maybe that’s, where all the coins are hidden? You can bet on it! Or maybe no, do not bet in hell. We have not seen and gold yet, but it does not matter. We are still excited. Around this hot oven, points scale ranging from negative numbers to 1600 winds, but only with various value jumps. 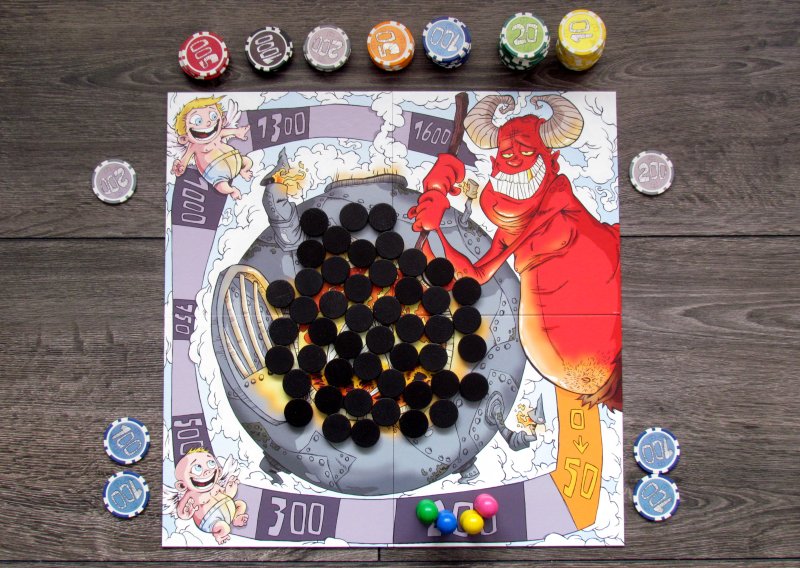 However, only after lifting it, we finally find out, what is behind high weight of the whole box. Its not coal represented by wooden tokens with values ​​from ten to hundred (total 48 pieces) or six plastic pawns of different colors. It’s because of those seventy betting chips, that weight of this box is so enormous. They have different values ​​from ten to one thousand (coming in seven different species).

At the beginning of the game, players each choose one pawn and place it on the field with a value of 200. In their pocket, then get five tokens, whose value together forms precisely this amount. All tokens of coal need to be mixed and put on the board on picture of the oven. Remaining betting tokens create bank next to the board.

And then begins first round, with betting just like all future rounds will. Players secretly take any tokens from their possession and then reveal their bets all at the same time. Why are they doing it anyway? All opponents are trying to guess their collective luck. They enter Lucifer’s hall together in an attempt to capture the highest value, and this highest loot is, what is this all about. Only if someone manages to steal tokens of at least the same value, player’s bet will be successful. 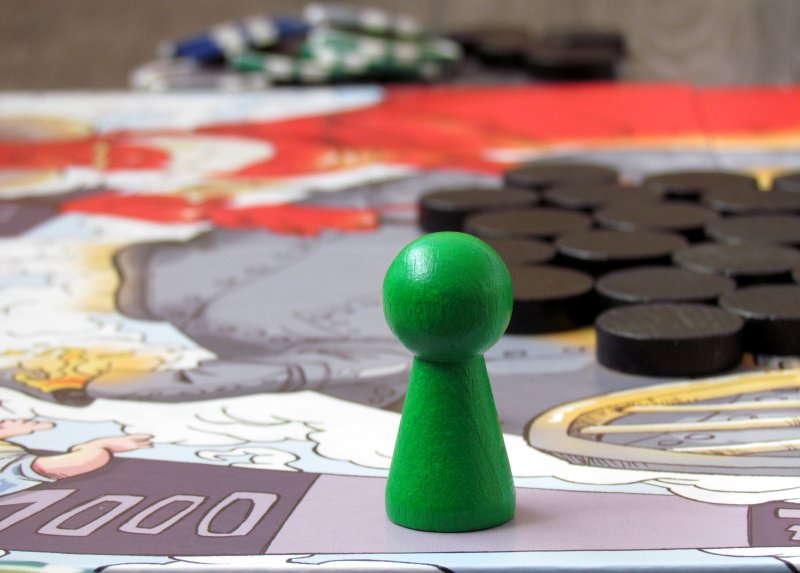 Bold players will then be removing coal tokens from boiler, coming into the second stage of the round. When a player gets to his turn, he can not pull only one token out, but as much as he believes his luck. One after another, of course. Hunting may continue as long as player believes (and do not get his hands burned). Because, when player fishes out of the oven image of Lucifer, his turn ends immediately without any profit.

Player must be able to call it an end before that and should not be pushing his luck overly long. Total value earned by the player is visible to all and is not his to take. Not yet. In the third phase, after success (or failures) of all players, everyone will receive tokens from the pot. Important part of the third phase, however, is evaluation of betting, which can lead to those rewards in gold. Successful bet is only that one, which is lower, than highest successful coal hunting in that particular round. For that achievement, player gets same amount from the bank, regardless of whether he has pulled devil or not.

Points can also be doubled, if a player has bet maximum of all and it was simultaneously also not too high. Further bonus is ready for most successful coal hunters. Players can look forward to receiving new batch of betting tokens from bank, which can be used in the following rounds. But total point amount is partially secret, because scale figure marks only the range, where player’s actual profit is located. 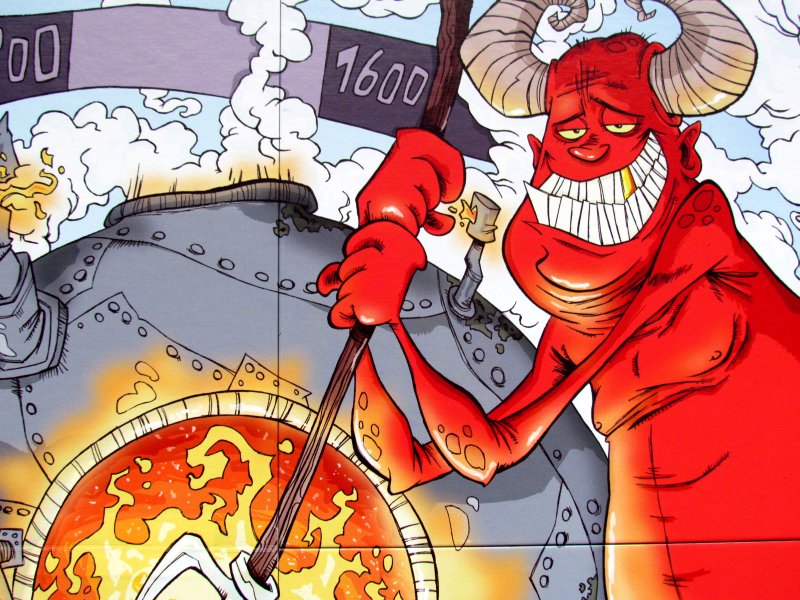 But then, there is still possibility of a deal with the devil, if player fails! Then, he can collect one fiftypoint chip from all players, who were too greedy and pulled Lucifer token out during their turn.

Pulled pieces of coal are set aside and do not return into the boiler immediately. Before each round, it should be checked, if there is not too little coal on the board (when it all fits into the furnace picture). In that moment, all coal must be shuffled and put back into the fire. Game continues until someone accumulates at least 1600 points. His winning ends the game immediately and ruthlessly.

Auf Teufel komm raus is great betting game, in which players have to be smart and know, when to stop their hunting. But this time, greed is not the only thing affecting their chances on victory. Points do not derive only from this activity, but also from betting on the success of others. That makes this game really unique. 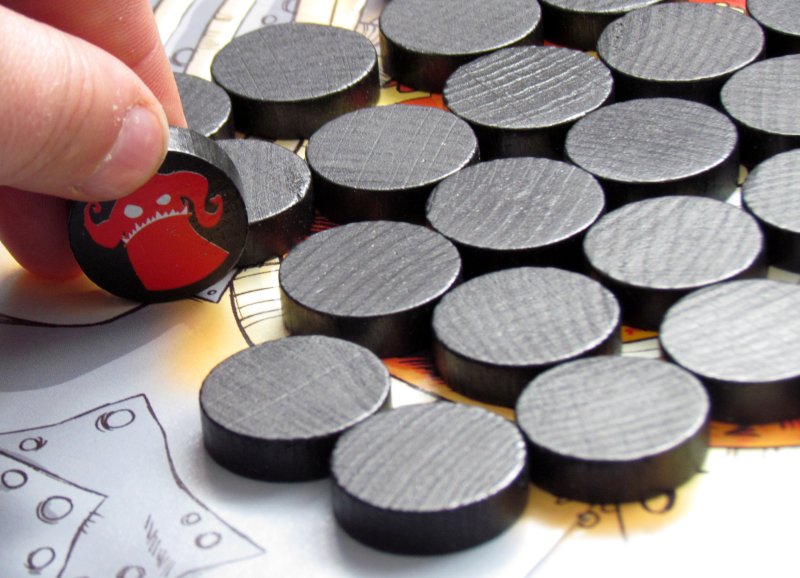 There is no reason to conceal it somehow. The game benefits not only from the luxury and original processing with massive chunks of chips, but also from the dynamics. You never have to wait too long to pull, and even when you’re not on the turn, you still have concerns about what goes on in the game.

Great idea is to approximate points. Because you never know exactly, how well your opponent stands. This will be especially important near end of the game, when the ranges becomes already three hundred points wide. And there are already big differences, so victory of a player may be a surprise.

Rules are really simple and can be taught even to absolute beginners. Thanks to bluffing and gambling, it is not entirely suitable for the youngest players, so it is recommended from ten years up. Game is obviously based on luck, whether your or someone else’s. Parts are sufficiently different from one another, because they all benefit from the interaction of the players. 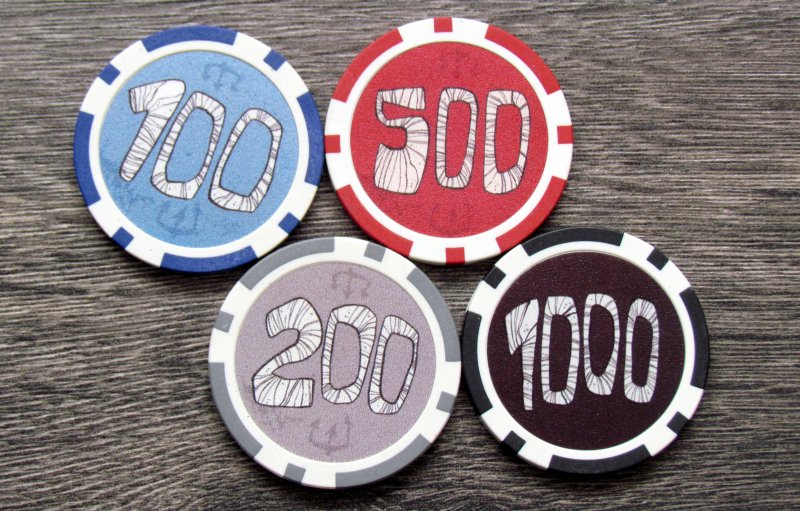 Match in higher numbers may last about an hour (ie not those reported forty minutes). But even so, it is not staggering time, because we are talking about five or six players and fun all the way. Conversely, the lower the numbers gets, the closer you get to 45 minutes and even below. But with shrinking numbers, entertainment decreases as well. Reasonable minimum amount should be three players, because game loses its charm with two.

Betting is settled really well. Players must carefully weigh amount, they are willing to sacrifice. This is not only affecting chances of their profit, but also their opponents. Conversely, when drawing coal, they can take risks and try to eliminate other by scoring higher. This is, where you can really significantly affect others, you just need a little luck.

Auf Teufel komm raus is a must for anyone, who loves thrilling games or games based on push-your-luck idea. We really like the game, when it comes to fun and laughing. It is a pleasant surprise and proof, that the topic of risk and betting is still not burned out and can be reinvented with something really funny. Auf Teufel komm raus is a hell of fun with the right people.

+ it can be influenced
+ bold graphics, beautiful processing
+ exciting game
+ interval point scale
+ tempting luck is not the only element
+ reasonable playing time
+ up to six players
+ adjustable length (by target points)

Auf Teufel komm raus is, despite some negatives, one of the best (if not the best) push-your-luck game, that we tried. It's the opportunity to bet on the success of players, that makes it unique. They hunt for coal in the oven and their courage can affect, who gets his bet payed off and who will not. The game may be a little longer in multiplayer, but its no fun at all with two players. Lucky will be still your architect of victory, but it does not have any major impact on the fun itself. You should somehow expect, that pulling pieces is not tactical. And when you do, you realize, that Auf Teufel komm raus is great fun for adventurous gamblers.