Review: Augustus – what will happen after Caesar? 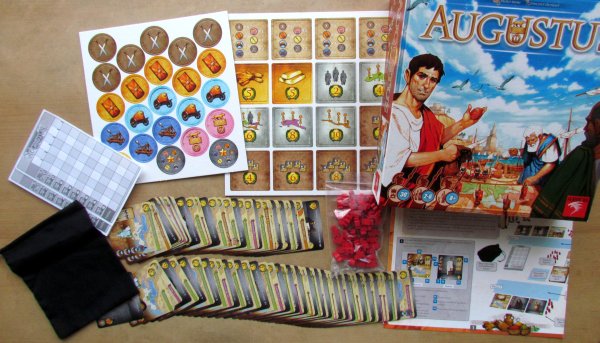 Our emperor is dead. Rome needs to continue its existence as a republic. We just need to find a great personality, that will continue its legacy and writes all of us into history. We are searching exactly for such a man here in the Senate. Who wants to apply for this post, which can change our lives?

You will be of course very happy to sign. Otherwise, you’re not interested in a game called Augustus, that takes us back in history to only few years before Christ. Its author is Paolo Mori and with him worked also illustrator Vincent Dutrait (Tikal II, Lewis & Clark, Tschak, Phantom Society). Game was first published in 2013 under auspices of publishing house Hurrican.

We are invited by Roman senators, who have a magnificent harbor behind themselves, on a visit to this traditional square box. Contents are not just so spectacular at first glance as we were told. There’s no game board, sheets in several boards rest on a large sofa made of rulebook. There is also a deck of cards, cloth bag, a lot of red pieces and pad to mark the score. 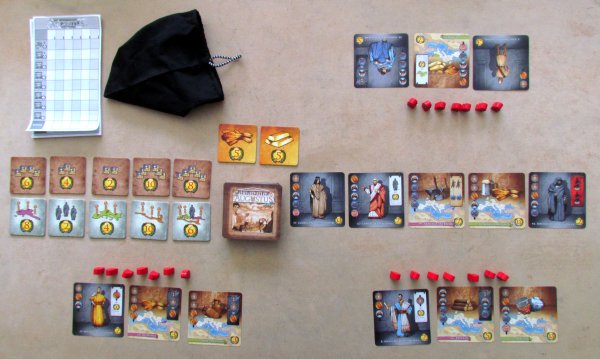 But back to the cardboard components. While the round tokens represent mobilization (eg catapult or crossed swords), larger boards constitute rewards wrapped in a laurel wreath. And 88 cards shows on its images not only nice illustration (with names), but above all they all represent some senators and provinces. Both have value in victory points, requirements for mobilization, but also special abilities.

From a shuffled pack of these square cards, each player gets exactly three (he chooses them out of six), which he puts out in front of him face up. They represent his three aims of conquest. Everybody gets also seven legion units in red. Remaining pieces are placed in center of the table, along with draw pile of tasks, from which players create common offer of five. All mobilization tokens are inserted into the bag and reward tokens for completed tasks are put in the middle of the table in comfortable reach for all.

At the beginning of each round, one of the opponents will become a crier, who takes a bag with mobilization tokens inside. Player will now draw one token at a time and always announces, what exact unit has been trained on the battlefield. Players can fulfill requirements of their senators and locations with their help. 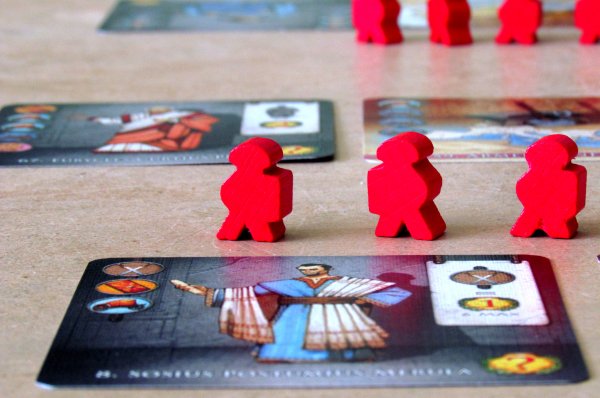 After this announcement, each player can take one of his legions piece and let it be recruited. It will turn right into this selected type of soldier. And according to its training, player can now place it on any task card with same requirement. Most cards have more positions, where players must send their units to complete it. Only when they fill up all claims on card, they can scream with joy AVE CAESAR.

But we did not get so far now. Active player takes one chip at a time and players perform mobilization over and over again. In addition to training new soldier, player can move one of the existing from one card to another. Draw continues until a moment, when crier pulls out joker token. At that time, he returns all tokens back into the bag and passes his role to player on his left.

When a player completes his task, he shall notify other players with AVE CAESAR. All his units are pulled back and moves the card among completed ones. At this time, he can use its one-time effect. In some cases, cards grant ability for the rest of the game. 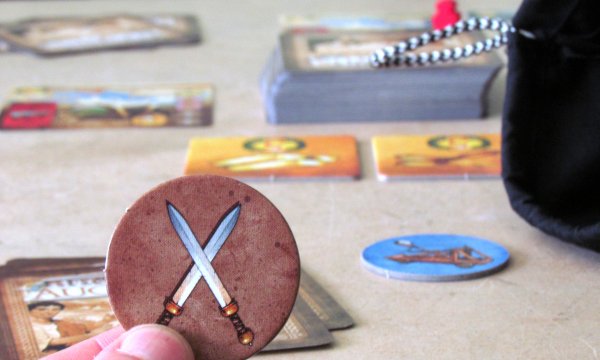 In the middle of the table, there are reward tokens. Player, who scores first combination of that particular token gets it. At the end of the game, he will get proper reward in the form of victory points for it. Conclusion of game occurs, when any player fulfills his seventh task. Now everybody adds up not only points for rewards and fulfilled tasks, but also for abilities of some locations. Everyone notes these points on scoring pad and winner is player with the highest score.

Augustus is a simple game of chance, which is dominated by drawing pieces from the bag, just like recently reviewed Dr. Shark (review). Drawing seems fair, but some tokens remain on the bottom, when you draw the joker. This causes all tokens to return back into the bag. It is now easily understood, that this game will not be suitable for more demanding audience. On the contrary, its main target audience is less experienced family segment. And this game is really doing honest work.

Good work with accessibility to a wider audience is great thirty-minute game time. And more good news is, that its not a problem to meet it. There is not problem to complete seven tasks in time. Moreover, all opponents are playing at the same time and no one feels left out and does not have to wait. One of the opponents is indeed the most active one in the present, but everyone else must record his draw. 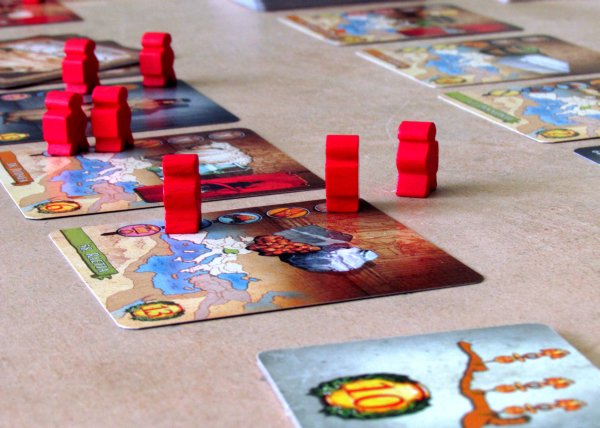 Rewards are same for every game, but variability without problems lies in having a sufficient number of different tasks. Even in game with four opponents, you are using only a quarter of the total number of cards, which guarantees fun for a long time. But the aforementioned rewards are helping the entire game, as they give players even more targets in addition to accumulation of tasks. They have to assembled into meaningful groups, if you are able.

Various effects of these cards also allow not only improvement of your own chances, but also to attack opponents. But you also get opportunity to mobilize new units, possibility of replacing one kind of resource with another or gaint victory points for the end of the game.

It is obvious now, that players have to have luck to finally win. This essential element remains hidden in drawing task cards and not just during the game, but also the beginning of the game. Ultimately, however, point can different quite a lot and it may be clear before end of the game, who will go for the win and who is only loser. 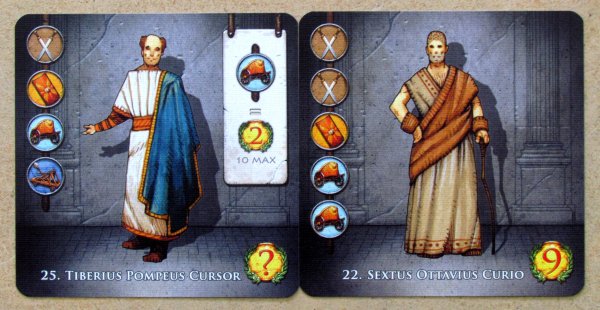 Number of players obviously does not have a big impact on the experience. It affects the game in a really minimal way. With more players, you will enjoy only slightly greater emphasis on offensive cards and only sometimes, because everything depends on the random card offer. Yet the pace of the game is often intermittent with evaluation of tasks, which fortunately does not last too long.

Despite the essentially simple point, game has a nice processing. Above all, illustrations on large square cards work well. Their graphic design with materials compounded into the image itself can bring trouble, when you need to determine, which player has the most of any goods. You’re only interested in gold and grain on the cards, but in addition to them, there are also other types, that have only an illustrative meaning. Otherwise the game but clear and moreover completely language independent. 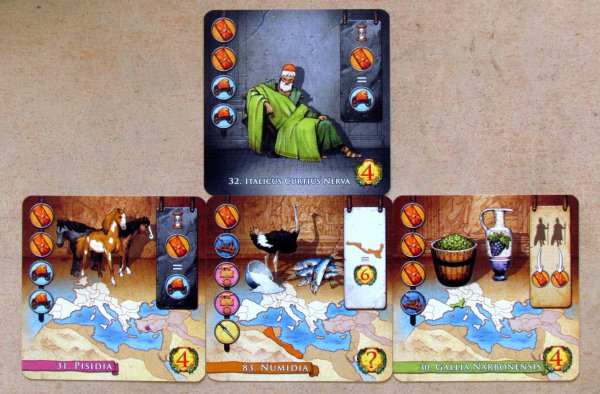 Augustus performs very well in a role of game for less experienced players. They enjoy it really well. It includes a simple mechanism for drawing and filling your cards (actually a bit like Bingo), but leaves plenty of decisions on players, so they do not feel only as a rag doll in the hands of fate. The game looks nice and has a very rapid course, making this a hilarious family fun. But more demanding players should probably avoid it.

Augustus is a game, in which your score will be a multiple of your good decisions and luck of the draw of tokens / cards. You can affect your success to a certain extent, with how well you fulfill your tasks and where you place units during the game. At the same time, however, whole game revolves around simply drawing tokens out of a common bag. With their help, players are trying to meet requirements of location or senators in front of them and try to accumulate sufficient military power to complete their task.The successful card then bring them a reward in the form of victory points, but also special abilities, that can be one-time or permanent. Game includes several options for attacking each other, but everything is usually about accumulating points. It is a pity, that among illustrations on the cards, you will have to look for objects, that interest you, because they are not apparent at first glance. But otherwise game goes very well with all numbers of opponents, because they are all constantly involved in the game and can recruit new units. Augustus works very well as an accessible family fun, you learn it quickly and offers fun in a half of an hour's time.