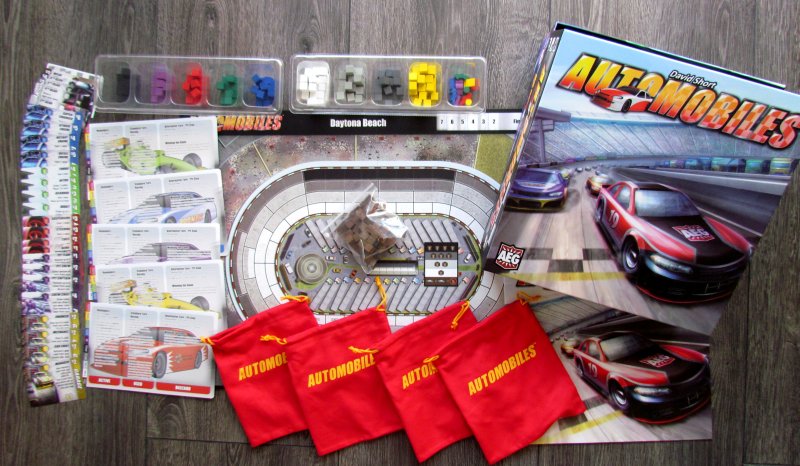 It’s time to race! One last look into the face of your mechanics. Every single one gave a slight nod to let you know, that everything is okay. First, I will keep away from the danger, hang around somewhere in the middle and not unnecessarily worry about technique. Only when the first tire change comes, we put our innovation in: square wheels!

Made of cubes should now be every racing car, that competes in Nascar series. Or maybe only David Short thinks like  this, creator of board game Automobiles. It was published in 2016 with logo of Alderac Entertainment Company (AEG) on the box and therefore part of their transport series (Trains, Planes). Pictures are work of Kali Fitzgerald, Ikaan Studio and Marco Primo. European distributor is then Esdevium Games.

Box is definitely not something tiny and it’s also pretty high. On the cover, we see cars in the lead-in lap just before rolling start in the NASCAR racing series. Ahead is obviously a red car with logo of the publisher, but we still runs right past with our top speed and peek together on the package contents, before the racing car even start. 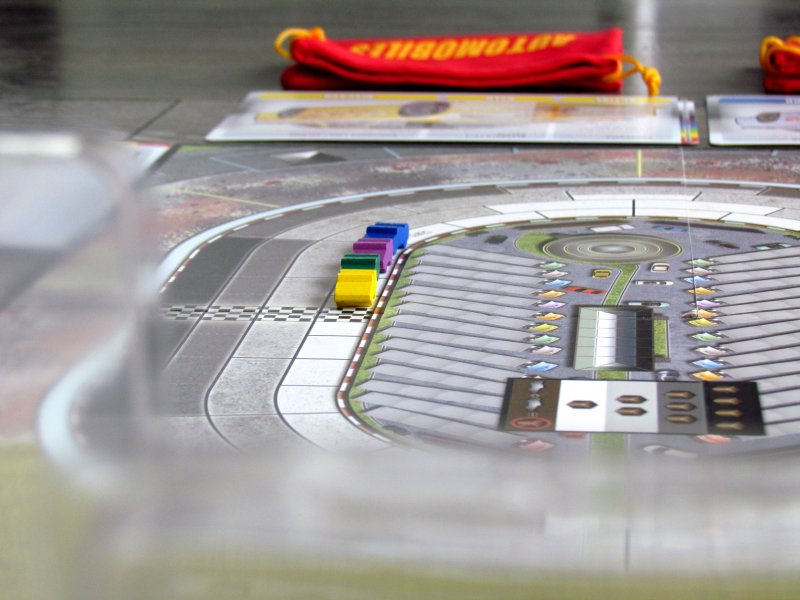 Inside is a two-sided game board, that shows exactly, what you would expect in a racing game – tracks. On one side, it is Daytona Beach, while the other contains Monza (but do not worry, its not the Italian course, but a lot shorter circuit). Both maps have counter in the upper right corner and trails have several lanes, each divided into rectangles of different grayish colors.

Under the boards are already smaller components. First, there are two plastic compartments, whose slots are filled with cubes in a total of ten colors. Columns for counting laps are also made of wood as well as racing car miniatures. Both of them come exactly in five pieces, which coincides with the maximum number of players.

Main component for whole game are cards, that match colors of already mentioned cubes. Each card has a picture, ability description, but also two places with finances – upper right corner is price needed to purchase this card, while below are dollars, which each cube of this color adds the players pocket in active round. There is also a bigger card representing individual teams. 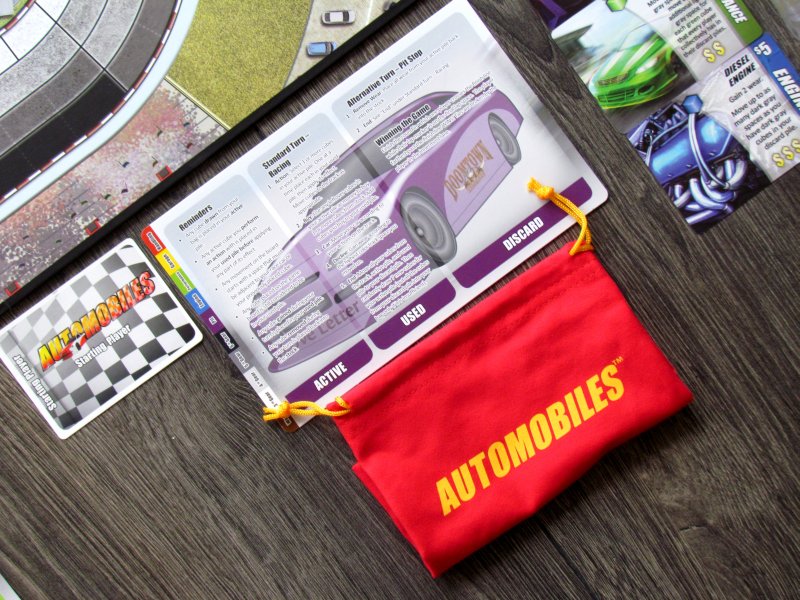 Component list is concluded with a set of canvas bags for players and at the same time, we step in the setup phase with them. Each of the participants of the race will fill it with initial set of cubes – five yellow garage, same number of white third gear and only two others, that represent fourth gear. Each participant chooses a color and takes two wooden components together with one card serving as player board (with help text and boxes for storing cubes).

Now, when we already have for players and their property, we must prepare a game board. Everyone places his toy car on it to starting position on the inner circle. These spaces are also equipped with values ​​in dollars awarding their racer. Based on their starting order, players can still carry out purchases and choose any cubes from created menu. But we have not built it yet, right? It revolves around two compartments. Each of them is randomly assigned one card in the same color and thus determine, what skills will represent cube of that color in the race. Each category has offer from several cards and players can choose it randomly by draw or use some recommended combinations.

Before start of each round, players draw seven cubes from their bags and put them on their card in active reserves. They can be used immediately for skill, that is associated with card in their color. These capabilities allow them to draw another cubes and otherwise manipulate the racing options for their own benefit. 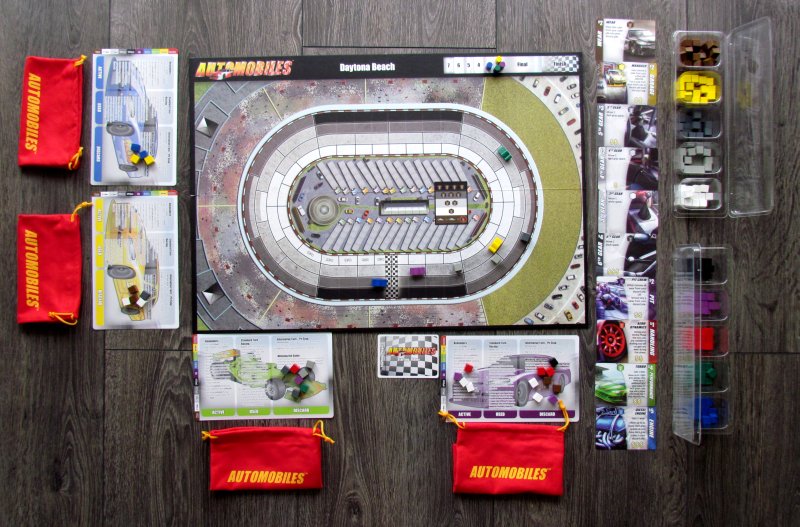 But the basic goal remains the same as in other racing games: movement of car on the track. And for that are used dedicated gear cards and also some other cards of different colors and types. Thanks to them, players may move forwards one space. These segments come in different lengths – the darker the color, the faster the lane. Wear is also related with almost every movement and brown cubes with it, which are in the later rounds needlessly taking up space and slowing down the car. Players may get away with speeding in their turn only by ending their movement in air bag of another car.

Each used cube is moved to discard pile or must be placed on the racing board, so it shows future movement of player’s car. Only at the end of the round, racing machines really move forward. All cubes are returned back to player boards (into the right discard column), where they will wait until the bag is empty. Only then can they all go back and hope to be drawn again.

End of round is still far away. Unused cubes bring finance, for which can players buy additional improvements (cubes). Any such new cube is added to discard space, not into the bag. Conversely, for a variety of events, it is possible to get rid of some cubes and optimize performance of car in following rounds. In conclusion, seven new cubes are drawn (if bag gets empty, then all discarded are put back and player should draw to seven) and next opponents in order can race. 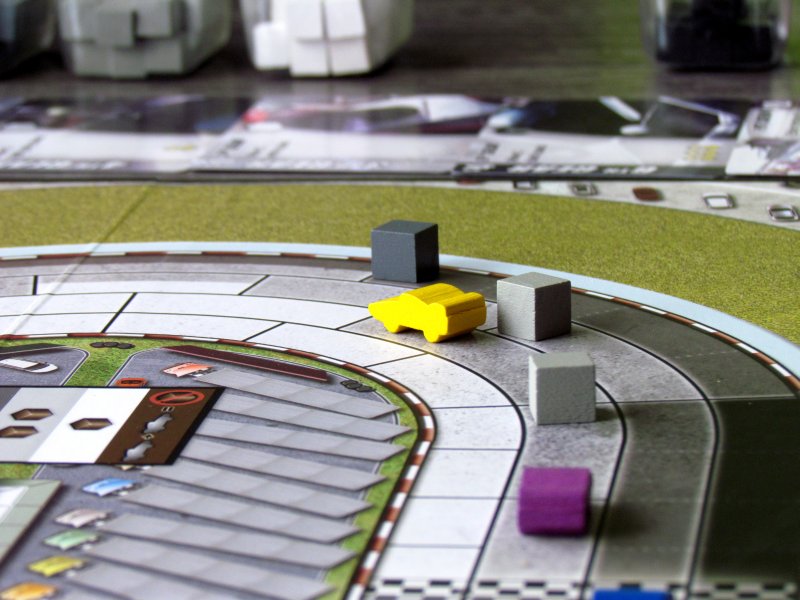 Instead of all this, player may enter the pits (anywhere on the race course) and remove all brown cubes of wear from his active cubes drawn for this round . Player can not perform any other activity during that turn. Game continues by moving forward until one of the competitors crosses finish line of final lap.

Automobiles is very unusual racing game, whose background is propelled by deckbuilding mechanic (respectively cubebuilding, if we were to be really precise). Now, those cubes are what players draw from bags each turn and can be used in a wide variety of actions, that can more or less related, to player needs.

It contains everything, we are accustomed to in deckbuilding games. Each cube has therefore its purchase value, for which can be acquired new and better skills. All used bricks are moved to the discard pile and do not return immediately back into action. Every time, players has to go through all his cubes, before having chance to draw those newly purchased ones. 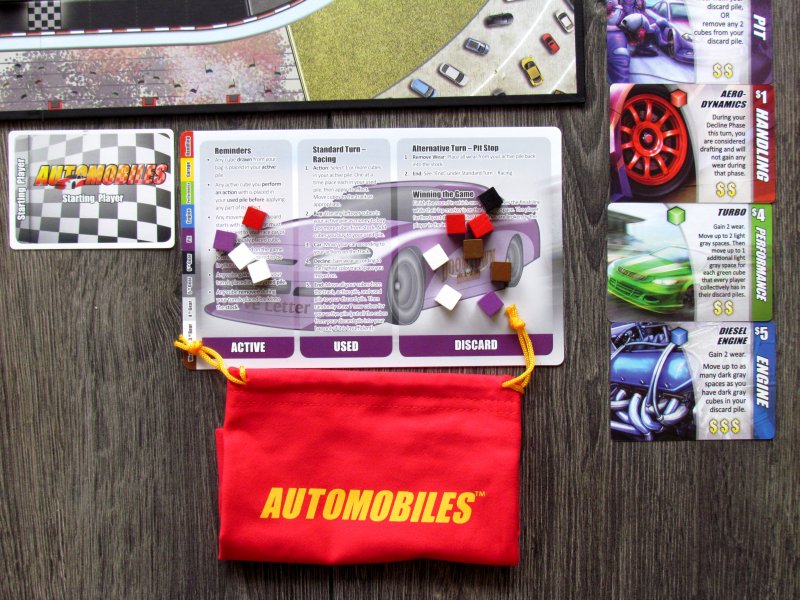 Connection of cubes and racing works surprisingly well. Major improvement is absolute absence of dice (for racer, not deckbuilder) and to some extent even luck (actual draw from the bag aside). Game is much more tactical, but while still reasonably dynamic, tense and challenging. Rounds of course last longer, than in other racing games, which is also one of the main criticisms. But that had to be laid on the altar of tactical overtaking.

Speed at which cars move along the track gradually increasing as you acquire better cubes and optimize bag contents. Tactical possibilities offer is wide and there are enough cards to choose from – each match will also have slightly different feel and changing options make the game perfectly replayable. This is surely enriched also by two different tracks in the box. Furthermore, players can vary length of races themselves, which also affects the focus on “cubebuilding” and more/less tactical play.

Overall concept of the game binds to one crucial feature. You learn to play it very quickly, even a beginner can do well and also has an uncanny ability to gain favor with players, who otherwise do not like racing games. Perhaps, it is precisely absence of roll-and-move mechanism, that makes it more accessible for those non-racers. Here, players experience feeling, that they have (almost) everything under their control. And they really are masters of their own luck. 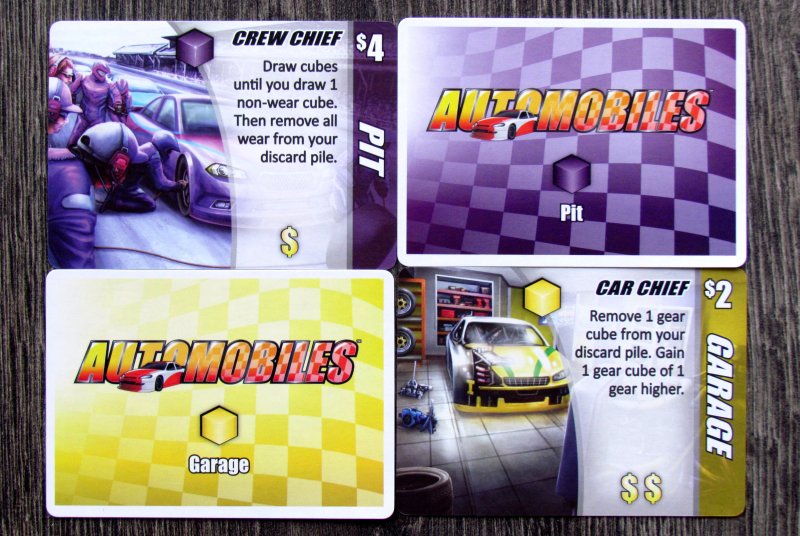 Unfortunately, greatest betrayal lies in number of players. If smaller regatta of cars participates in racing on the track, there is too much space and players do not have to maneuver so much. Blocking and hanging behind opponent’s back is one of the main elements of gameplay and you will certainly be missing it in two player games. Therefore, we recommend playing Automobiles best from four opponents up or at least everyone make team of two cars with less players. You can then work out some rules or still search for one and only true winner.

Processing is solid. Player board cards are not completely perfect, because they are covered with tons of text, but otherwise everything is pretty clear and clean. You may mind perhaps only one thing: need to constantly peek at cube-card assignments as they change with every game. In early rounds of each game, it is quite uncomfortable, but it’s not exactly thing of processing, but rather roots in design.

Automobiles are solid and entertaining racing game for the tactically minded. The game is always a little different, interesting and with adjustable length of the race. Everything works exactly as you’d expect from a deckbuilder. But although it would seem, that Automobiles can hide no more surprises in their sleeve, you can find at least a few trump cards there. So be prepared to race tactically this time.

Automobiles is a good racing game, that bets all on cubes. Now, they are the main engine for all cars, that are racing in here. Players buy lots of them and use them not only to get their car further forward, but also to improve their chances by any other means. Game has an adjustable length, but also remains tactical enough with smaller number of rounds. Each match is also different, because card menu changes with every game. And there is a lot of cards in total to choose from. But then, it is not easy to keep assignment, which color belongs to which effect. Regarding gameplay, everything is simple enough, but in lower numbers of players less thrilling. Automobiles are a racing game for those, who prefer to think first and only then stomp on their pedal.

by Dušan on 05. 11. 2018
The Vikings are really wild and unrestrained guys. There is no doubt about that. When you put a hammer and a beer together, you can get real [...]
Comments
Leave a reply