by Dušan on 18. 05. 2020
0
previous article
Review: Aeon’s End - Sheattered Dreams and The Ancients
next article
Review: Dune - diplomacy, conquest and betrayal on a sandy planet
Contents 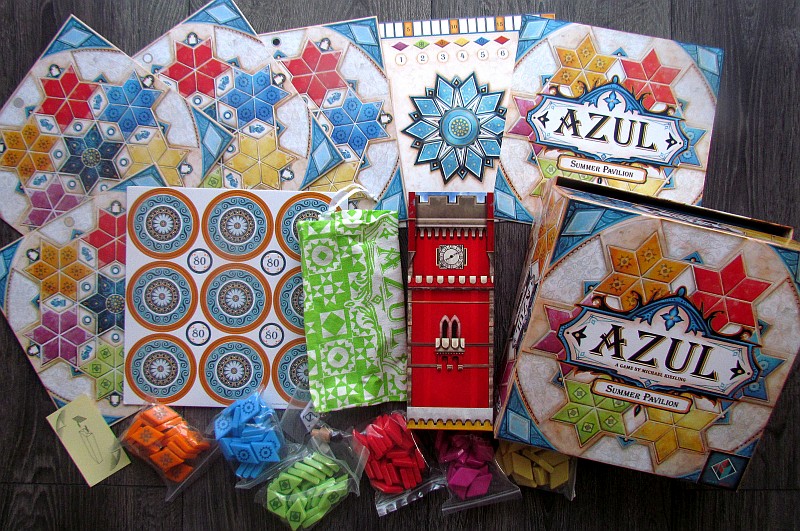 This is Neither Sintra nor palaces of Evora. The Summer Pavilion was supposed to be the place that the ruler gives as commission only to the best of the best. I was among the chosen ones, who were to fight for this honor. But before that could happen, the whole situation changed. The pavilion was never created, but my opponents and I never stopped thinking about which of us would gain this honor. Today is the time to answer this question!

And the whole argument will be decided by the players. In the third sequel in the Azul game series, designer Michael Kiesling has prepared a game for us with the theme of Summer Pavilion. The game was published by Next Move Games and the illustrations are provided by Chris Quilliams. It arrived on store shelves for the first time in 2019 and sails around Europe on the wings of Esdevium Games distribution.

The game attracts with its colorful box, which again resembles stained glass, this time in a diamond shapes. One double-sided square board is dealt to each of the participants in the game, which they place in front of them with the colored side facing up. In the middle of the table there must be a place for a round offer of factories. Players immediately fill them with drawn tiles from the bag. There have to be exactly four on every factory tile position. In addition to the factory, there must be room for a scoring board, which also includes several building tiles. Players each choose a color and places their pointer on the starting point of the scoring scale. An interesting (and last) part necessary for the game itself is a tower made of hard paper, which will observe everything from above. 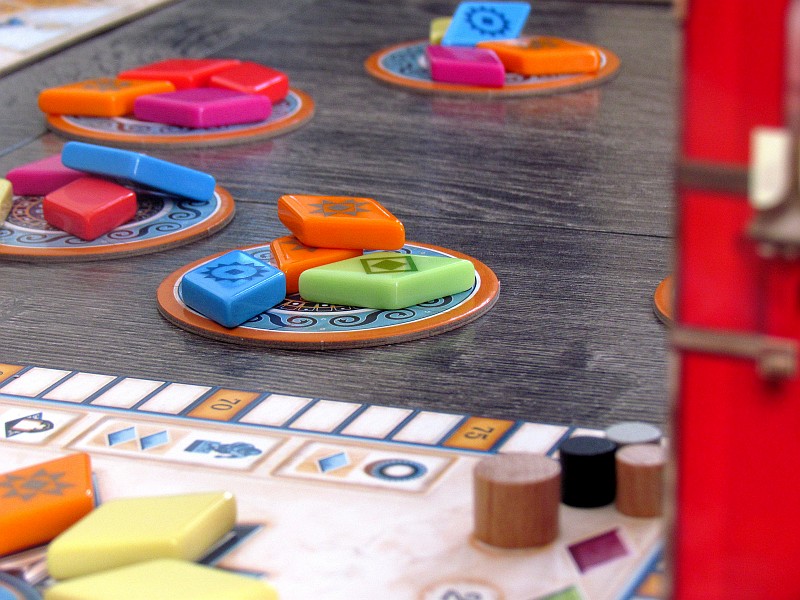 All participants will then alternate competing in the first phase. In it, individual rivals have the opportunity to take stones from the factories. But it’s not just that. They can take stones of only one color – either from one factory or focus on the center of the table (in the middle of the factory circle) and take stones from there (but again only one color). In the first case, there are usually some pieces, that do not share the chosen color, and these are the stones, that are moved to the center of the table and create an offer for the next rounds of this phase.

Players place acquired pieces next to their board, because they will need them there in the second phase of the round. Here, the number of stones of the same color determines the position, which player can occupy on his board (it can be also any lower number). So he places one stone on his colored star, while all the others used in the combination are thrown into a common tower. Players take turns, so they can use more different colored groups and fill as many diamond fields on their plan as possible. 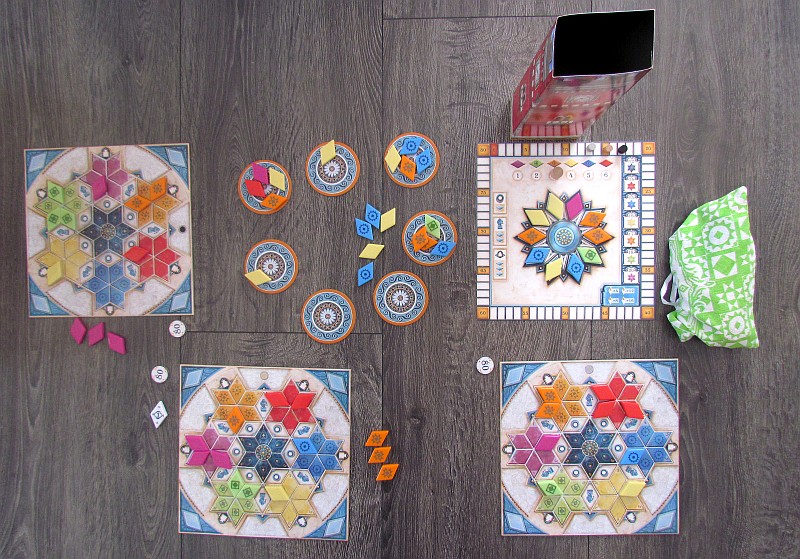 One color is designated as a joker for each round, and this is decided by public scale. It is this color, that players should take into account, when planning their actions, although they do not yet know the layout of the factory. They can keep any four stones from one round and carry them over to the next. To do this, they are placed in four free positions in the corners of player board.

The setup for the next round is clear. The counter moves. All round plates of the factories are filled again, whether there are five, seven or nine of them, depending on the number of participants. And the effort continues until the sixth round is finished. After the game, the success of the players is determined with the help of points. The multicolored finished star on the plan has the lowest value, the monochrome then differs in price according to its shade. Players will also receive bonuses for all covered numbers. The one with the highest number of points in the total becomes the winner of the game.

Azul: Summer Pavilion is from the very beginning like its older siblings, trying to impresses with its famous processing. This completes the excellent experience of an otherwise purely abstract effort to put the right colors on the board. 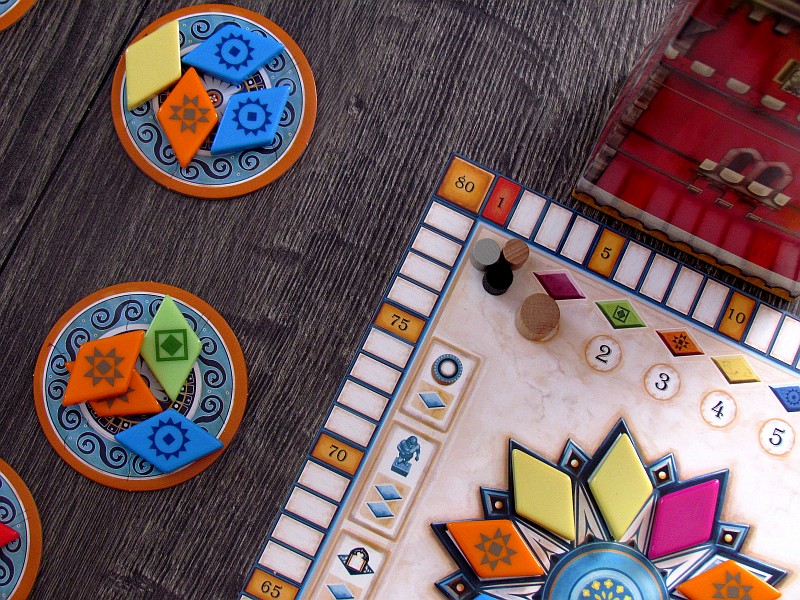 And again, the basis is the same, there are factories in the middle of the table, from which the players choose stones. Even the course of the selection remains the same – one color from the position can be kept, while all the other stones go to the center, from where other players can choose them again according to color. Simple and elegant. Coincidence only decides about the starting distribution of stones for each round, then the conditions are the same for all players. Of course, it depends on the playing order, and especially on what the players have prepared for their plans in previous rounds.

The starting player for the next round is the one, who selects the stones from the center first. Of course, he has a small advantage, but at the same time he can often sacrifice some otherwise more advantageous moves for such a moment.

In general, however, it is mainly about the ability to properly time and plan, when to steal those colored stones from the middle and also planning moves for the next round. In this game, you just can’t do without thinking and you should count on it. 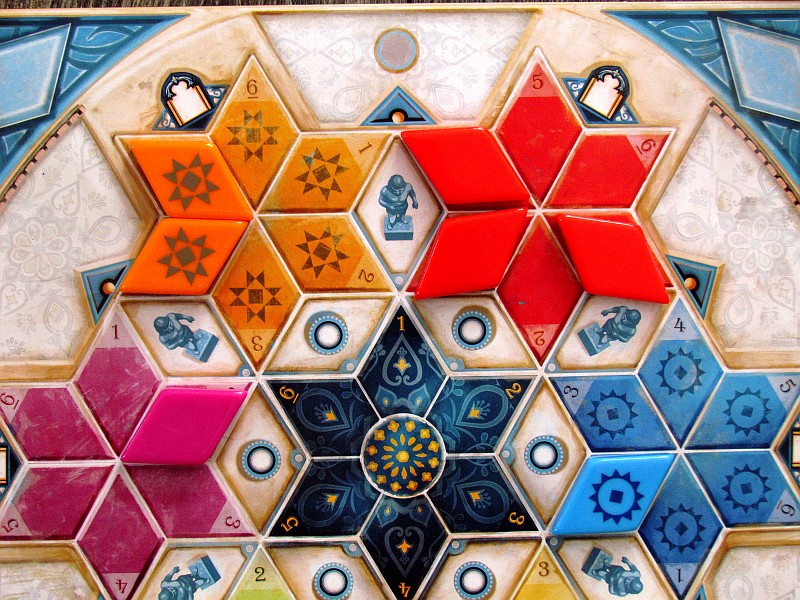 And if you want a pinch of freedom, then the author has prepared another side of the plan for you. There, the stars do not have their own clearly defined colors, so if you opt for one-color stars, you can have several stars of one color instead of one. The multicolored ones must still be composed of unique pieces and no color may be repeated in them.

Instead of completing the columns, this time the players are building circular sets, which always have clearly given numbers. But the number of accumulated and played stones cleverly only determines the number that can be occupied. So each color must be collected by the player several times. And the closer the end of the game gets, the more important it is to watch out for the joker color. 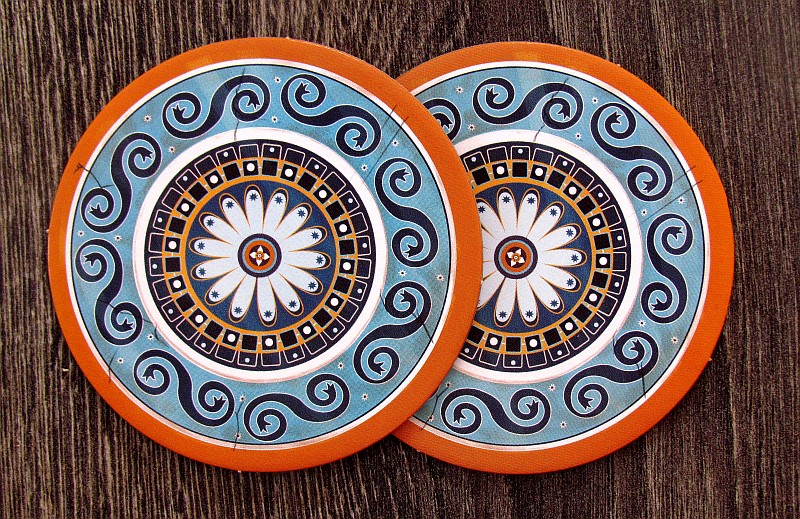 The new variation on the Azul recipe continues to entertain us even after repeated plays. But above all, it brings to perfection the simplicity that is at the heart of all the games in this series. Really easy to explain rules, but at the same time smart gameplay. Here, players do not have such complicated decisions, but everything remains thoughtful.

Game time supports all this, because it guarantees length of around thirty minutes, sometimes a drop longer. And even with a higher number of players. The interaction completely disappeared from the game, but surprisingly speed and smoothness of the game benefited from this. 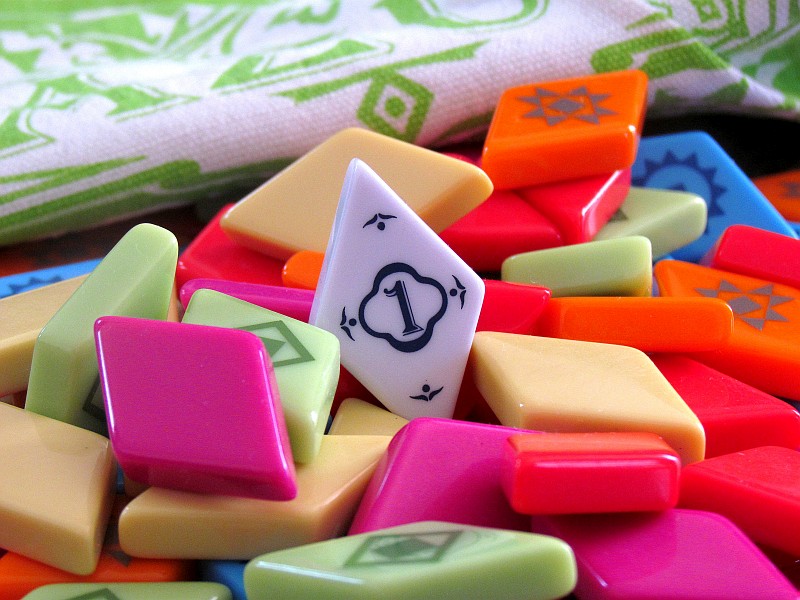 Azul: Summer Pavilion gives players stones and puts meaning into them. Whatever color you have, you always have some option to do with it. Each round you have to choose the pieces and then place them based on their physical amount on one space. The clever mechanism also makes the third Azul great fun, so we recommend the Summer Pavilion to all lovers of abstract games.

- someone will miss conflict aspect

Azul: Summer Pavilion has the ambition to be even the best in the whole series. This is mainly due to the simplicity and fluency of the game, while everything remains similar, and especially fully focused on decision-making. The games are fast and players have to cleverly choose the colors of the stones to profit from it. So if the conflict in the previous boxes bothered you, this is exactly the version for you. Azul: Summer Pavilion is a beautiful abstract game.

by Dušan on 02. 03. 2020
Only in a properly constructed garden can the visitor reach the Zen status. Balance is a fragile thing, that requires the right intensity of a raging [...]
Comments
Leave a reply