by Dušan on 10. 06. 2015
0
previous article
Review: Assault on Doomrock - one hundred and one way to die at Doomrock
next article
Review: 27th Passenger Hunt on Rails - a train full of killers
Contents 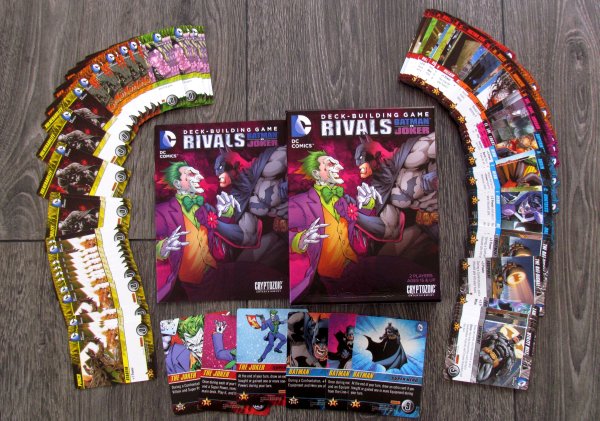 I always thought, that there would be some kind of end to all this. I saw the ending behind every curve, but this clown in colored suit with a flower in his lapel always somehow pulled out. Today seems like a perfect day to end this. Joker will be finished!

We will be able to actively participate in fight of these sworn enemies. Thanks to card game Batman vs Joker belonging to group of Deck Buliding Game Rivals, we really get that chance. We owe it to the author, Matt Hyra (Food Fight – review), who published this game as a novelty in 2014 together with Cryptozoic Entertainment and Esdevium Games distribution.

As the right card game, neither Batman vs Joker does not take some large space, when packaged. Box is slightly larger, but not excessively. We find two enemies in the midst of one of their legendary battles on the cover. Neither of them seems to be going to give up soon, so we have a little time. Thus, we will slip quickly into the box and look at 98 cards hidden in there. 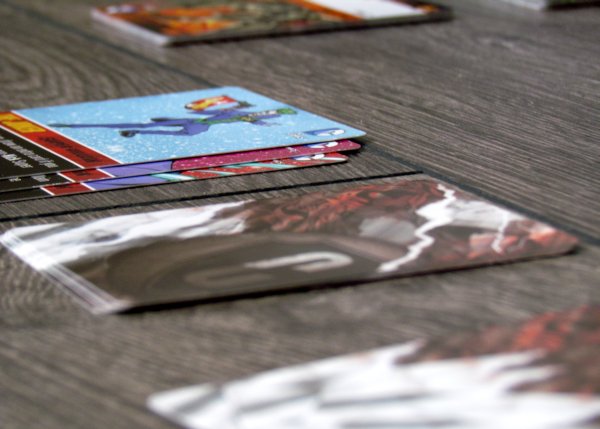 All have a similar arrangement of images and text, but it can be divided into several groups, such as starting cards, locations, equipment or specially designed for good and bad guy. All have their cost in the lower right corner (for purchase), image and text information about abilities. They can also contain strength, which is the only currency in the game, but also victory points listed in the lower left corner. This description is true even for weakness cards. Types are easily recognized apart by color.

Players will create even better relationship to further six cards, which are bigger by a drop. Their pictures are three portraits of each of the fighters. In addition to ability described on these cards, they especially serve as number of lives, that character has still available.
At the beginning of the game, players now have to each choose different of these two roles. Whichever choice they make, they take trio of oversized cards and stack them from smalles number of lives (on top) to the strongest (at the bottom). As the game goes further and further, both adversaries become more furious, dangerous and less vulnerable.

To do this, each player will also be holding his starting cards. Seven of them are punches, which offer no ability, only strength. Players merely add one point to their power, that will be needed for both fighting and purchase. Another trio of cards, which players get, is vulnerability. These cards, however, already have absolutely no benefit, and their purpose is to block place in the deck. From this dozen shuffled cards, each player gets a hand of five. Then all that is left is to create a joint offer of five cards from a shuffled main deck. 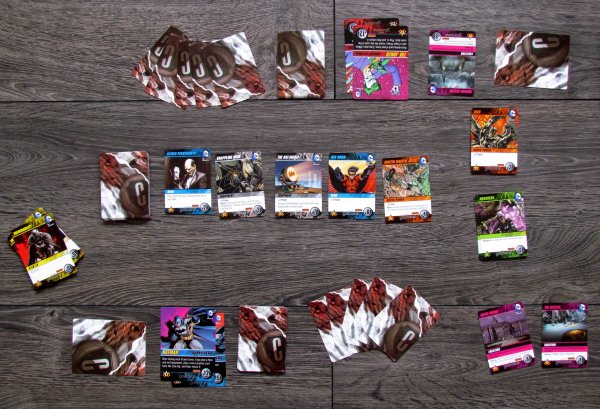 On his turn, player can utilize (if he wants) ability text of all the cards in his hand. And then he can take advantage of all the cards in form of their strength to purchase new cards. Total amount can be spend on one or more cards from the menu or from a package of kicks, which allow for powerful blows. There is more of these cards in stock and available to both sides of the battle.

Some cards are wearing magic words Attack (attack) and Defense (Defense). Thus, these may be at any time during the game used to attack the enemy, or to prevent such an attack respectively. Implication is then described directly on the card and usually means gaining more weakness cards, which will be blocking and slowing down player´s deck.

All purchased and received cards immediately go on the discard pile. Player sets aside all his five cards from his hand at the end of each round and draws new five ones. In the event, that his drawing pile is empty, he shuffles discard pile, creating a new supply. During the game, both adversaries can also find locations, that provide support throughout course of the game. 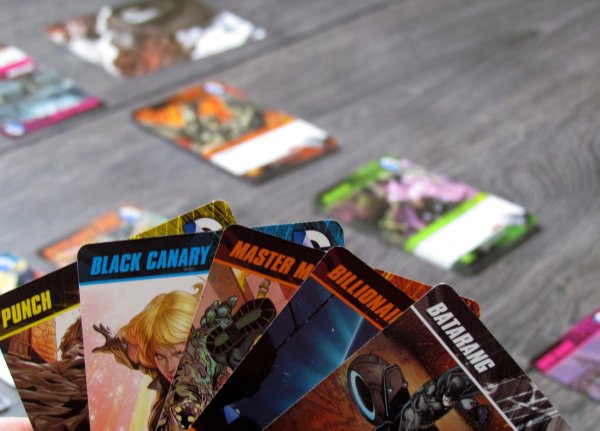 That would seem to be enough for a balanced fight. Abilities, fists and feet. Settled. But at the beginning of each round, player may announce a confrontation. This happens at a time, when he knows identity of his five new cards. His will will be to injure an opponent, so that he had to throw away his current large character card. To do so, it is necessary to accumulate power, which is at least equal to number of lives of that rival´s top card. After the attacker plays all his planned attack cards, defender can still use blocks and increase number of lives, thus resulting in attacking value not exceeding it.

Only then, players will determine, how the confrontation ends. If he was successful, hero card goes to the winner (it has value in victory points), and defender lost one of his lives. But now, his character has new card with more lives and even more powerful ability. Game continues until one of the opponents drops dead, losing his last third card. Second possibility of an end, where it is necessary to add up the victory points (and subtract any cards weakness) to determine a winner, is going through the whole common stock of cards.

Batman vs Joker is a classic deckbuilder, which comes from a long line of games on functioning Cerberus system. Joint offer and purchase remind us of Ascension, but this game is sufficiently different and first difference is, there are only two adversaries.

Precisely because of this, it works very well indeed. Players are constantly alternating in turns and do not have a chance to relax. They are constantly banging into each other and improving their packages. Now purchase of cards and their use is an essential element of this game, like in every deckbuilder. And everything, what such a game stands and falls on is ability to offer diversity of cards and their skills. At this point, it is important to mention, that this game contain a chance to get rid of unwanted cards, especially those weaknesses.

Capabilities are great thematicaly and are used very well with both characters. But in effect, there is enough to sustain attention only for the first few games. Game then begins to repeat itself and this is also noted as first significant shortcoming. Sixty cards to purchase (except those starting) is just too little to make the game hold attention of players in long term. But its a whole different deal, if you own other Cerberus games (which we don´t), because they are compatible!

However, there is still confrontation. This is really a new stuff and perfectly suits the game. Both players are trying to accumulate the greatest strength possible to be able to bring their opponent to his knees. But often, when announcing confrontation (which is done only at the beginning of the round) they must also rely on luck and risk. Cards in hand most often do not contain necessary power and everything will depend on more cards drawn during player´s turn due to their effects.

Luck therefore pays for an important referee. It can drop players to their knees or stand them into a world, where everything is possible. You never know, what awaits you in this game. And here it should be noted, that the game lasts less, than thirty minutes. Two players enjoy it in spite of this randomness, because it is light and fun. It does not offer any in-depth strategy, but randomly drawn menu is always about choices. Playing cards from your hand is almost automatic.

And while some see fact, that Batman´s toys fall into the hands of his mortal enemy, as disruption of the theme, it may not be entirely true. Actually, it is not so difficult to imagine, that Joker could come up with a devilish plan, creeped into the big-eared hero hiding place and looted valuable weapons or even a Batmobile from there! That´s all believable, if you look at it with the right eyes. 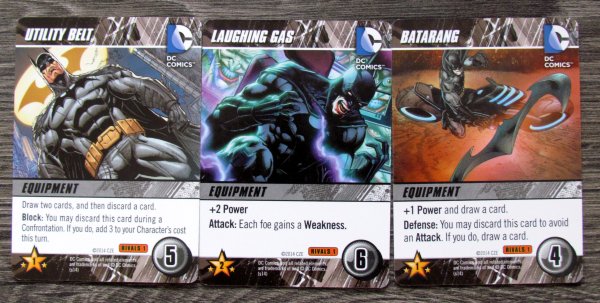 Batman vs Joker works great as a game for two. It offers a comfortable and fast-mounted package with easy rules accessible for less experienced. However, above all there is a great element of confrontation, which alone has a chance to end the game sooner. Will it be a KO or victory points? You decide. Batman vs Joker will entertain you.

- does it bother you, when Joker is using Batman´s toys?
- questionable replayability

Batman vs Joker is a very good game for two, which has no kind of extreme durability (cards begin to repeat itself), but even like this works well as a relaxed and unpretentious fun. With its theme can find their way to the players who otherwise deskovkám too neholdují. And thanks to simple rules, it is easy to learn and enjoy exciting and thrilling at the same time. Its spice are confrontations, that need to be ushering in the beginning, and you never know, what will happen. Batman vs Joker is a very good and great game for two players.