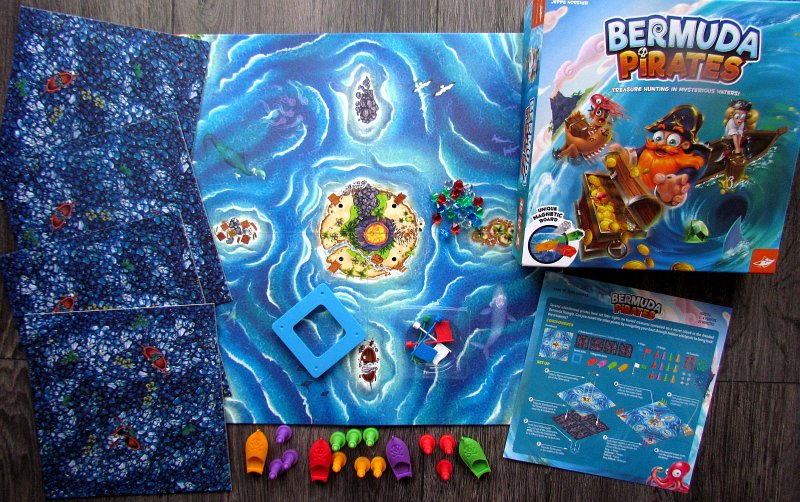 There is no mystery to the Bermuda Triangle. Most captains avoid the place where ships are said to be lost. But we are hiding under a blanket of secrets, because when a ship comes here, then it can be excellent prey. In fact, all the ships, which were later searched in vain by their owners, were sunk by us and we kept their property.

Players will be intertwined among a pile of whirlpools in the board game Bermuda Pirates, created by designer Jeppe Norsker. The game is published under the auspices of FoxMind and European distribution is handled by Esdevium Games.

On the lid we see pirates on the edge of one of the hungry whirlpools, trying their best to hold a lot of captured treasures in their hands. Players start setup by randomly rotating and placing four magnetic plates, each with five magnetic zones placed on it. They are held together by a small stand. At the top comes one large board, which is symmetrically divided into four parts and in the middle is the main island with treasures. This is where players stick colored flags to hold it all together and place six copies of each gemstone there, that make up the treasure. While everyone dismantles their set of buoys (according to the number of players) and especially one magnetic vessel. 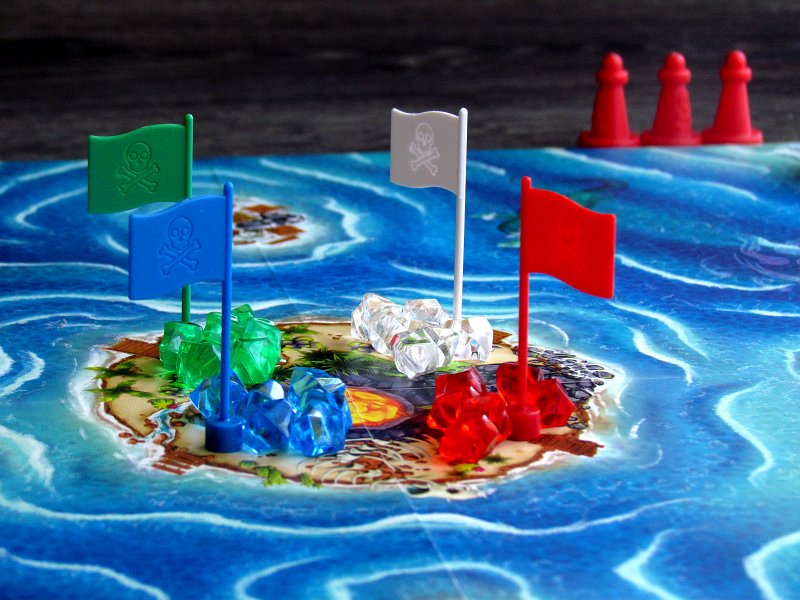 Players then take turns, with the active captain taking his vessel, placing a finger on its stern, and trying to maneuver it between the water vortices to reach the safe center, the island, and the treasures on it. But he can only move forward until he is caught by one of the hidden vortices. If this happens, he must immediately stop his movement and it is the turn of another player. Before that, however, the active player can take one of his buoys and mark a dangerous place, so that he can avoid it next time.

When one of the ships makes its way to the island without any mistake, it can load a stone of one color and turn back. On the return way, he has to watch out for the water vortices again, because now not only will he end the move, but it will also deprive him of all prey loaded on the ship. All stones will return to the island. The exception is, when the magnet overturns the ship and the treasures sink into the sea. Such gems will remain in place and someone else may try to pick them up. 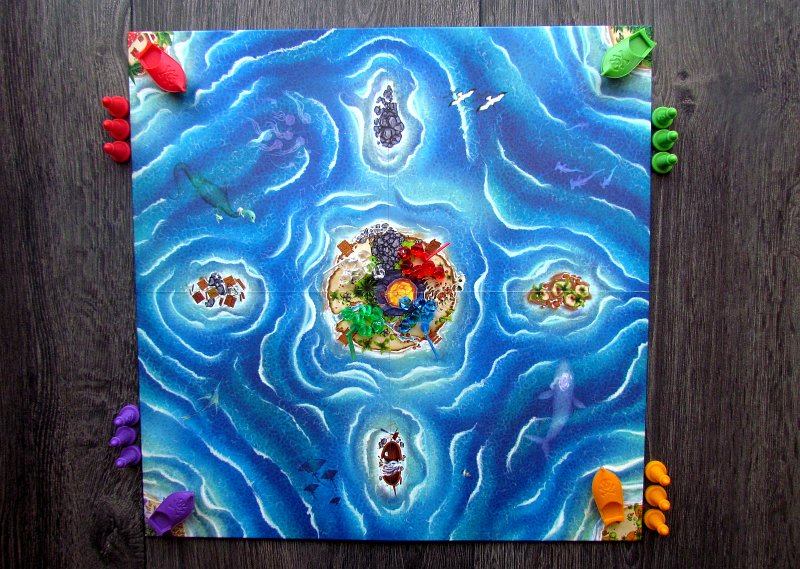 Multiple treasures can be collected in one turn, but one mistake means, that the player loses everything he has loaded on the ship at the moment. Once he swims back to his port, his move ends and he can keep the diamonds. The one who is the first to accumulate stones of all four available colors becomes the winner of the whole game.

Bermuda Pirates is a game of both dexterity and luck. Players first explore their surroundings, because the magnets have a slightly different layout each time, as the base magnetic tiles rotate and change with each game.

The basis is a good memory, so that everyone learns from their mistakes and those of others. Some can be marked with the help of buoys, but there are a limited number of them. In addition, opponents may intentionally misuse these marks to trap opponents. Within the game, it is possible to place, move or remove one buoy each turn, so it is possible to constantly manipulate them. 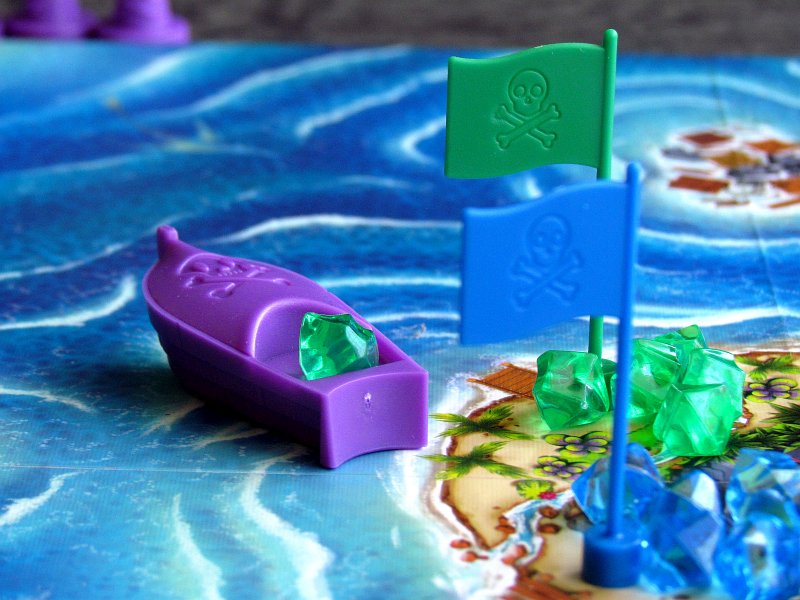 The second topic is the willingness to take risks. One stone may not be enough and the player may decide to sail for another. But there is a risk of error and the fact, that in the end, he gets nothing. The game is therefore a constant balance between trying to have more stones and not sinking at the same time.

The moves of individual players are exciting and usually quite quick. The game is very fast, because a little over a quarter of an hour is enough to complete it. Thanks to that, it is also great for children starting school, who will already have sufficiently dexterous and accurate fingers. It is simply not possible to maneuver between treasures without basic skills. In multiplayer, there is a longer wait for turn, but otherwise the game is practically the same, because the ships always come back. 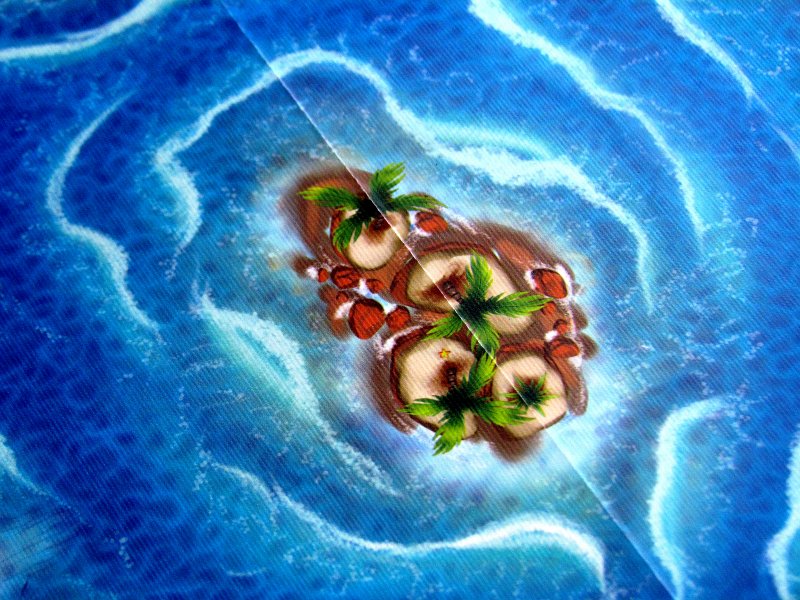 An exception to this rule is the advanced variant, where players can steal treasures from each other. Thus, the rivalry enters the game, which until now was only in the form of an effort to be faster. Suddenly, however, a threat hangs over the players and they have a much greater motivation to manipulate the buoys and try to lead the opponent into a trap.

The decoration of the whole game is its processing. From the detailed graphics of the plan, through the ships and the magnetic plates, everything works great and there is no reason to complain. This game for children received maximum care and you can see it at first sight. 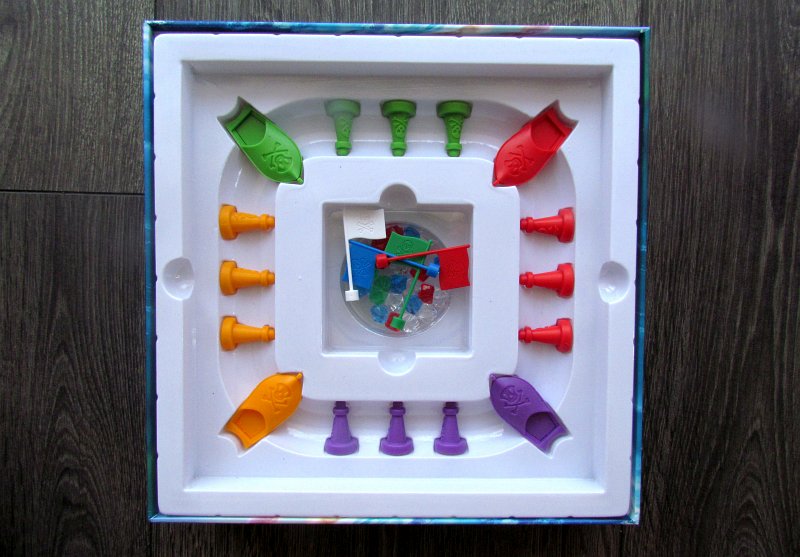 Bermuda Pirates is such an inconspicuous children’s game. But when you open it and let yourself be swallowed up by all the hidden beliefs, you will have a problem closing it yourself and not wanting to have more fun. The gameplay is really great and there are practically no flaws in its simple beauty. Coincidence is only at the beginning of the game, before the players learn to place the magnets, but the tension remains. Bermuda Pirates is further proof, that magnets in children’s games are a safe bet on tempting fun.

Bermuda Pirates is famous children's game with magnets. These are hidden under the board and are arranged differently each time. All participants in the game play to sail with pirates, but they must avoid those hidden vortices. The game is constantly exciting, while remaining fast, but of course also quite random (at the beginning). But Bermuda Pirates is a delicacy for children, which is certain from our point of view.