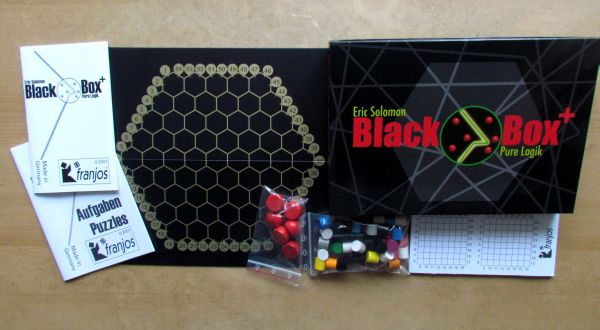 Black boxes are usually small devices, which are outwardly looking mysteriously. Their existence as a plain cube or cuboid is certainly surrounded by magic. What happens inside is usually known only to its creators. Now imagine a situation, where you get a box made of a virtually indestructible material. You are not able to get inside even using violence. And your task is to find out, how it works. Does this idea attract you? So read on, welcome to the place, where these black boxes go to sleep..

It is a game in box, that also happens to be black and bears the simple name Black Box+ subtitled with phrase Pure Logic. But darkness and inscription is crossed with some lasers. There is also the most important thing – name of the author Eric Solomon, who is a physicist and mathematician.

And as for these researchers is, their games are well thought-out down to the last detail. This fact was proven to us as a certainty by Phil Eklund with his games Bios Megafauna (review) and High Frontier (review). But Black Box+ is much more modest game, which also has a deep history. 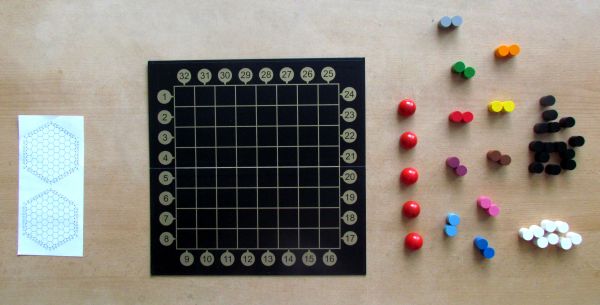 First published in 1977 under the trademark of Waddington, its existence started with invention of the CAT scanner, for which was Godfrey Hounsfield rewarded with Nobel Prize in 1979. And his friend was this Eric Solomon, who later created also other games, such as Billabong, which we will review next time.

Black Box+ came to market under heading of publishing house Franjos in 2007, thirty years since release of the original game. This new, special edition (originally published by Franjos back in 1990!), also brings new way to play. But now its soon to learn everything about it, we are just ready to lift the lid and marvel at how little components it takes for an excellent game. Oops, sorry to spoil the surprise.

Game takes place in a black box. That’s all we know. You will find, of course, black game board inside. But it is two-sided. On one side, you will find board with dimensions eight times eight fields, numbered from one to 32. On the other side, plan takes hexagonal shape filled with hex fields for a more complex variant. 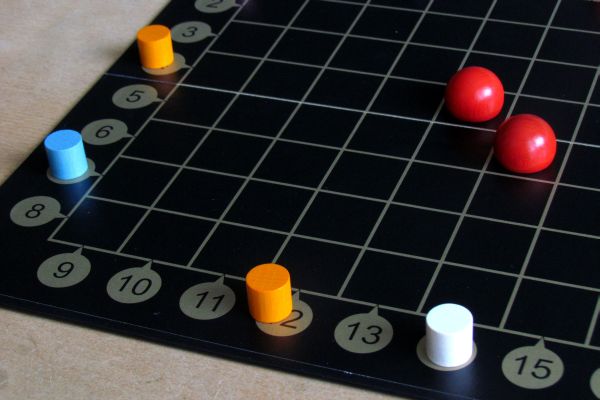 In addition, there are mainly wooden cubes inside the box. Its 42 of them and they vary in color from white to black. With them also six red balls lies at the bottom of the box with their tip cut off. These atoms are vital for the game and around their positions will all your thinking focus.

Rest of the components will only help you to hide their location. There is a tear pad for drawing diagrams. One side is for square version and the second for hexagon side, so you do not throw them away after one game, but after four (two normal and two advanced)! This diary will be used by player in the role of black box designer. But because the Black Box+ is really clever puzzle, it still contains a book with forty puzzles, that can be solved in one player to practice your skills without needing an opponent.

Our biggest concern today will be black box itself, actually its square design. We will not run into details of playing the hexagonal version, although its really similar. Rules will be explained on the simpler square side. The hex-shaped side is only a beginner’s dream. 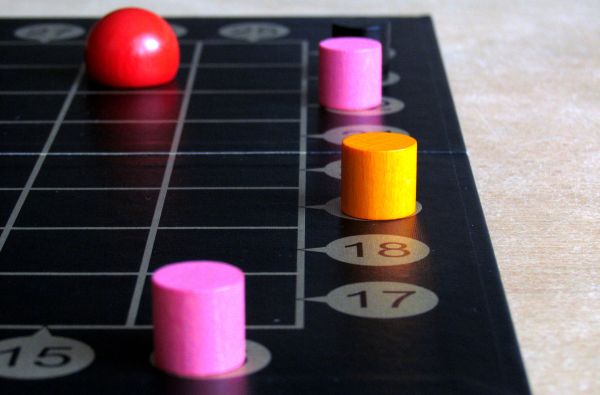 At the beginning of the game, players must determine, for how many rounds will they compete. Everyone must have same number of chances to be guessing player and also creator of the black box. So at least two plays are needed to finish one game. Players lay board between them and all colored cubes and wooden atoms are placed beside it.

Author of current puzzle now pulls a notepad and prepares puzzle for his opponent. Therefore takes a pencil and secretly draws four circles on checkerboard corresponding to real board in the middle of the table. These circles represent four atoms located in the black box.

Task of the decoder is to try to specify their locations using as few moves as possible. At the beginning, he has in front of him really only a black box, without having the slightest idea of its content. Fortunately, he is able to send beams into the black box and according to their response, he can then determine positions of the atoms. 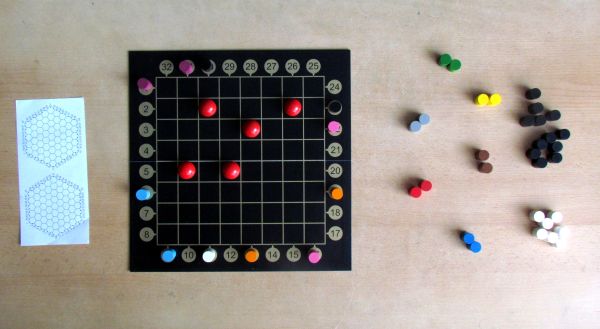 Player simply tells author of black box, which place does he want his beam to enter the mysterious box. And then the opponent, based on clearly defined laws, tells him, what happened. Beam might be absorbed within the cabinet or not. If the atoms dribbled beam back out, he must point exact location, where it left black box.

In fact, there is nothing revealed during the match from contents of the particular box. Players only know physical laws, that apply within. Each atom is surrounded by his force field in the shape of a circle. It has an average size of nearly three squares. If the ray hits an atom directly from one of possible sides, it was absorbed.

Corner of atom force fields run into four fields of box, where gravitational field takes up only about half of the tile. At the moment, when the beam hits only force field and not directly atom, it gets deflected and runs in a completely new direction at an angle of ninety degrees in the direction, where the gravitational field turns. Its not so easy to describe, but its really simple in reality. 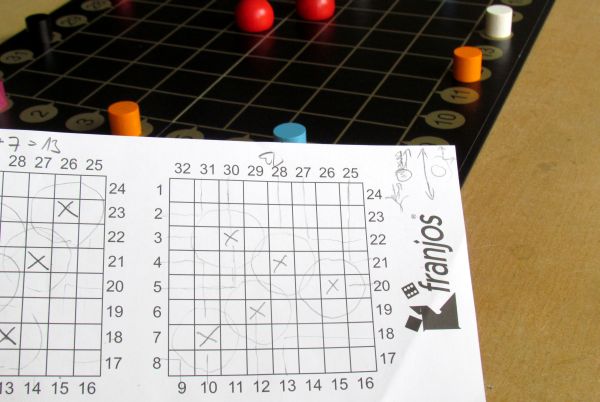 And then there’s one specific situation. When two atoms are adjacent, their force fields overlap, and the beam can even bounce in the same place, where it came from! This brings absolutely perfect confusion for your opponent. At least in first few matches..

True magic is, that everything depends on decisions, how player spread atoms inside the cabinet. A correct and tactical broadcasting rays is used only to reveal them. Multicolored cubes mark entry and exit of one laser. So they are always in pairs, which are easily traceable back, if needed. When ray gets swallowed, then you highlight the place with black token. And when it was reflected back to the launch site, you use an independent white token to mark that situation. In this way, you easily see everything, that has happened on the board since beginning of the match.

Once the decoder has an idea, where atom is located, he can it lay it on the game board. And with its help, he can better visualize and verify his theories. So gradually, you are sending rays to finalize a solution, that leads you to a solution. After you are sure, you have the correct combination, creator reveals his layout and after comparing, players split their points. 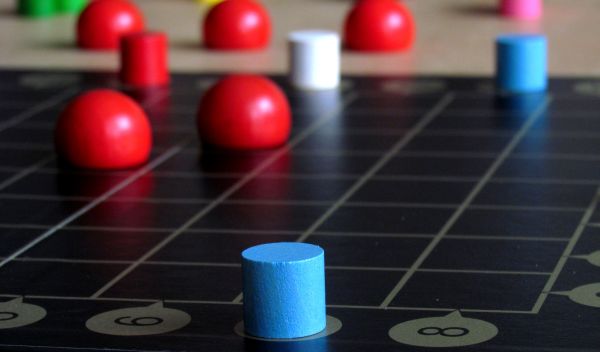 For each token indicating input and output beam from the box, guesser gets one penalty point. For a misplaced atom, this amount is increased by another five points. That makes alltogether his score. Players should also check, whether all reactions were reported by puzzle author. If he has incorrectly given a clue (willingly or unwillingly), total sum of guesser points for each such mistake is lowered by five points.

Players must then exchange their roles and play another round of guessing. Alternatively, you can play more rounds, but both players must always have the same number of both roles. The winner then becomes the player, who has received a lower number of penalty points in total.

Black Box + is absolutely stunning and elegant puzzle for two. Simple principle of several atoms placed on board turned out to be really addictive fun for the two adversaries. Both players are constantly involved in the game and have no chance to get bored. 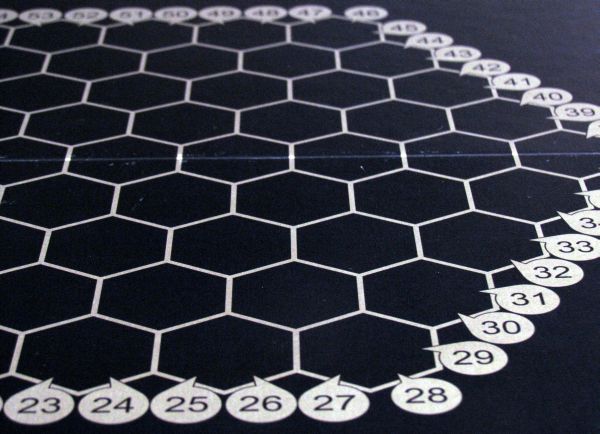 Behavior of beams is logical at first glance and when looking for the first time at images in the rules, you will have absolutely clear idea, what is happening inside. Then everything will depend entirely up to your powers of deduction. Now, this game is really the most about art of guessing, because the faster and use fewer rays you get it right, the less penalty points you receive. But at the same time, you must not risk too much, because there is greater penalty for one misplaced atom, than for sending other two beams just to be sure.

And then there’s also gorgeous and glamourous difficult hexagonal version. There, everything is harder. Movements of the beam may vary in different angles depending on the combination of two atoms force fields. You will thus need more experiments to determine their location, get longer matches and more mistakes.

Additionally, if you like square version, but at the same time, you would like to try something heavier, you simply increase the number of atoms. As you increase their number, you will also improve ways of hidding some of them behind other force fields and confuse opponents. So it is a double-sided puzzle. It is not only about the correct guess, but puzzle creator must think, how to best bewilder his rival. 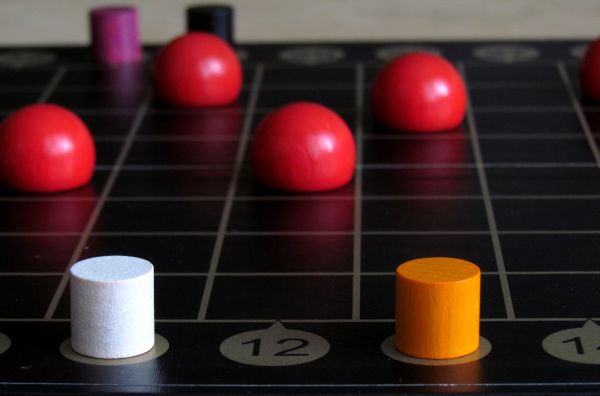 Black Box+ is a conundrum for two players. Although, we did not believe, that such a thing could exist, there it is. Black box lying in front of us and constantly amazing us by its perfection. If you like to think and compete simultaneously, you will not be able to get enough of this logical delicatess..

Black Box+ is a logical game, where two adversaries meet over closed box. One of players will become a puzzle-maker, while the other must reveal its secret and identify atom positions inside the box. You can send lasers from all possible sides and positions and enemy will tell you, what exactly happened to the ray. It can reverse, be deflected and come out in entirely different place or consumed by some of atoms. And its up to the other player to figure out atom positions based on these clues. Game is purely about art of deduction and you will solve different mystery every time. Moreover, you can set number of atoms used, which alters difficulty. Or you can get to an entirely different level with other board side and hexagonal fields, with more deflect options. Penalty points are awarded on end of each round and then players switch roles, which makes the game complete. Black Box+ is incredible experience to play for every deduction fan. You could hardly find anything like it. This game is really unique!