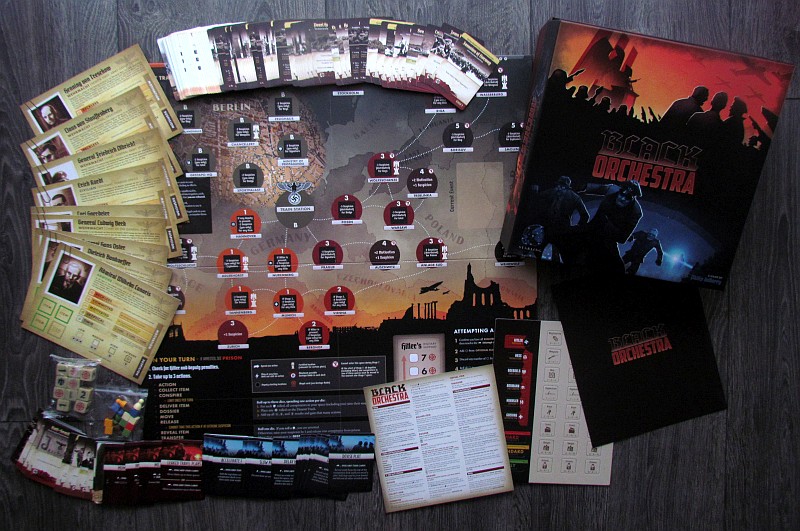 How did I get here? I do not remember. Did I travel through time? Or was I really born in the early nineteenth century and my brain was washed out? But why do I have such clear memories of the future?

Black Orchestra players are also invited to the plot of World War II. Its author is an experienced designer Philip duBarry, who got also help from Cody Jones and Dann May. Illustrations were made by Lucas Soriano and the game was released in 2016 with the Starling Games logo. Esdevium Games is in charge of distribution throughout Europe.

While the box is dominated by black color with the addition of blood red and Nazi uniforms, the content is under the control of a large game board. It  is wearing a map, where Berlin is connected to several Central European countries, including the Czech Republic. All you have to do is put this map on the table, the Berlin part will be filled with Hitler and his deputy tokens, and all other position will be occupied by randomly placed item tokens. Seven decks of event cards are placed above the plan, and other conspirator and interrogation cards also end up stacking in decks next to the board. 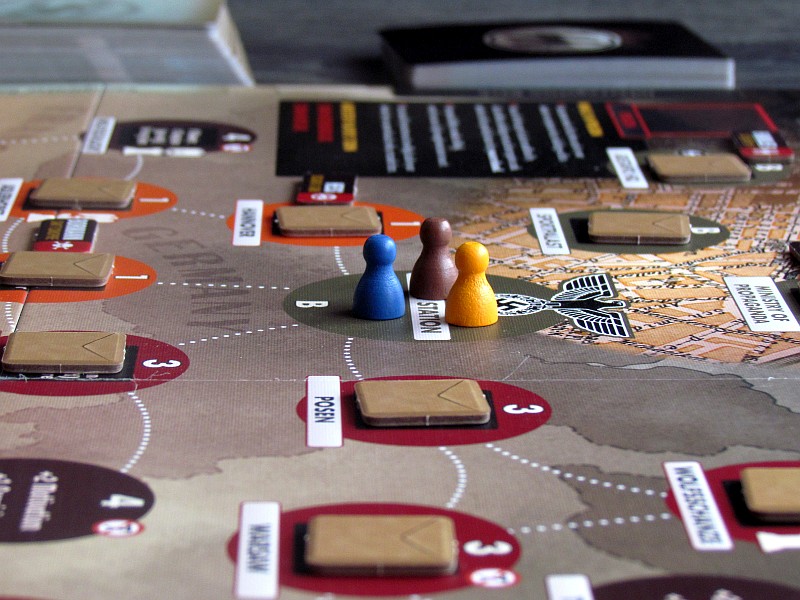 Not only do the players themselves choose one conspirator, they get their own thick paper board and figure, but they also have to agree on the difficulty. It determines on which position starts the dice on the scale of Hitler’s military support. The players themselves get two cubes for themselves and indicate their level of motivation and suspicion. At the beginning, players should also have ten dice at hand and then just start the game by placing their pieces at the train station in Berlin.

Each player’s turn consists of three actions, respectively three chances to do something. But there are many more to choose from. It is clear, that the heroes behind the scenes will move around the map between locations representing cities. Where player arrives, there may be an item, that can be picked up in a single action. Or he can deliver some of the items to his current locations and pretend to be loyal servants of Hitler. Such efforts reduce suspicion, that is otherwise constantly rising. 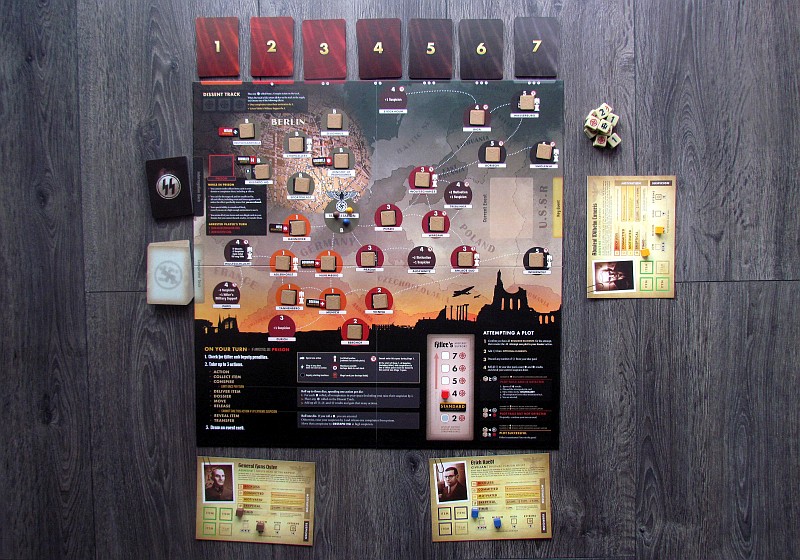 Players have in front of them a so-called reserve, which is located below their board and there is space for only a certain number of cards (depending on the number of players). Only the abilities of these cards are available. For an action, they can take the top card from the conspiracy deck and add it to that stack.

All the preparation, plot cards, and Nazi confidence can then be turned into conspiracy attempts by heroes. He simply rolls up to three dice (adding each costs one action) and tries to roll the appropriate symbols. With their help, player can increase their motivation or reduce Hitler’s military strength. But only after all three dice are on the scale, which can be done across several turns, by different players. But another symbol rolled again raises suspicion. 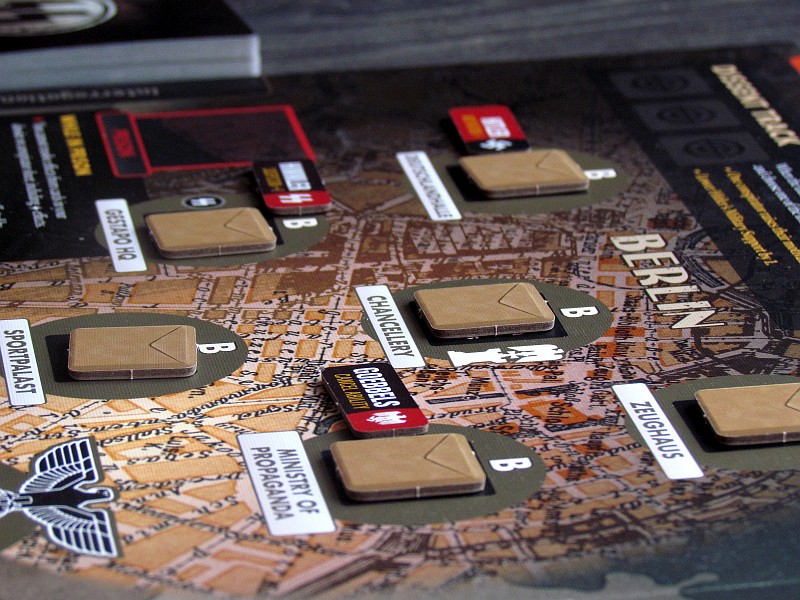 Once a player has played all three of his actions, he must reveal the top card from the event deck with the lowest number available and evaluate it. These cards influence the course of the game and copy the historical line, so that the game looks credible. These cards also include instructions for Gestapo raids, which may surprise players and, if under suspicion, may go straight to jail. And they won’t get out of there so easily.

Until then, the captured player will have a different turn, in which he draws an interrogation card. That gives the player a choice between a faster escape from prison and less impact on team secret plans.

With all this, players are preparing the ground to try one of their available plans at the right time. To support it, they can use items in their possession, but also collaborate on the same map position or affiliation. The difficulty of the task will correspond to Hitler’s military strength, but will also be altered by the fact, that the character can be suspected of sluggish activities. Against all this, the player must roll a set of dice and try to get enough icons of success. 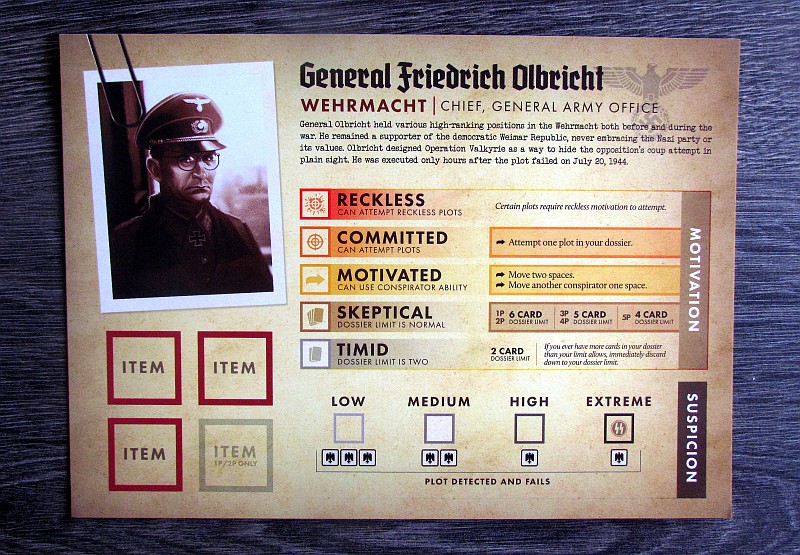 There are several results of such an action. The first thing to find out is whether the team’s efforts were detected by enemy. If so (by comparing the number of icons), then all other efforts are futile. On the contrary, it has a negative impact on all conspirators and Hitler disappears into hiding. But if players have escaped the suspicion, then they can finally compare the number of achievements with the required number. If they succeeded and Hitler was murdered, then they immediately celebrate victory. But that’s the only way players can win. On the contrary, there is more chances of losing – all players being in prison at one time or when their time (cards) to act has expired.

Blood Orchestra has a very interesting name and even more interesting theme. Players jump into a task, that looks crazy and impossible. And this is the attraction, that few history lovers can withstand not to try by themself. The better news is that the Blood Orchestra is not only a trip to history, but also a great and fun game.

For players to enjoy this game, they must have a positive relationship to history, and especially slow games. On the other hand, you will sweat quite a lot throughout the game, because the game is all but simple. Success is also decided by chance, as dice will just do what they want. This also fits thematically beautifully, because the best prepared plan can go wrong.

On the other hand, the theme radiates from every moment. Players move tiptoe at the edge of the revelation and only one bad look separates them from prison. This constant uncertainty keeps everyone alert, because you never know what the commanders are about to do. And then there is the last move, when you bet everything on one card.

The game is a constant tug of war, which players must control. For this, it is necessary to cooperate really well. It is a bit clear that the game will not be the fastest with regard to its theme. Players must cooperate carefully and plan everything so that the situation fits their way. Therefore, it is good to count on a minimum game time of over ninety minutes to complete. 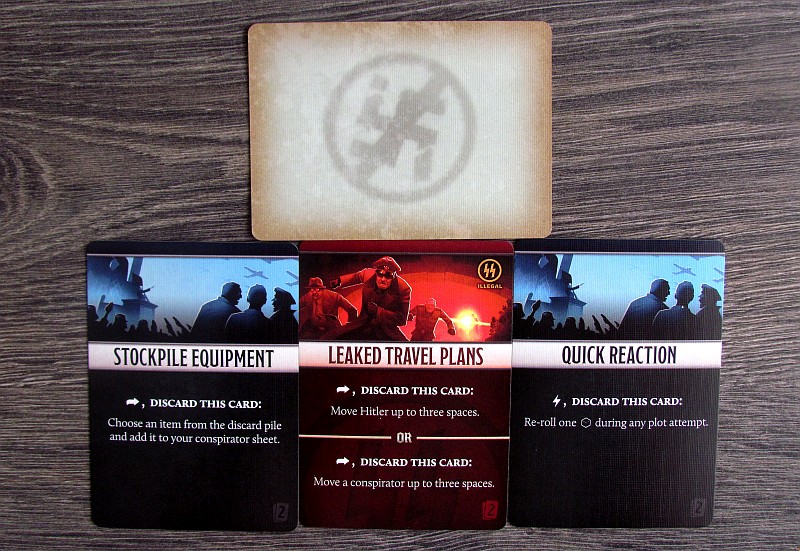 But we will go back to chance, which is also associated with the aforementioned time. Imagine a situation of an hour and a half struggling, preparing the ground for your plan, avoiding suspicion, getting out of jail, and then a single roll of dice decides, that you get caught and it’s all over. It can make someone angry, that he will never play another match again. If you are such a player, then Black Orchestra is not a game for you. It is interesting, that some players do not mind dice specifically in this game.

Although the game is cooperative, it does not matter how many players will face Hitler. Although in two or even in solo play is definitely not boring, the game and cooperation is better to fight the Gestapo in higher numbers. 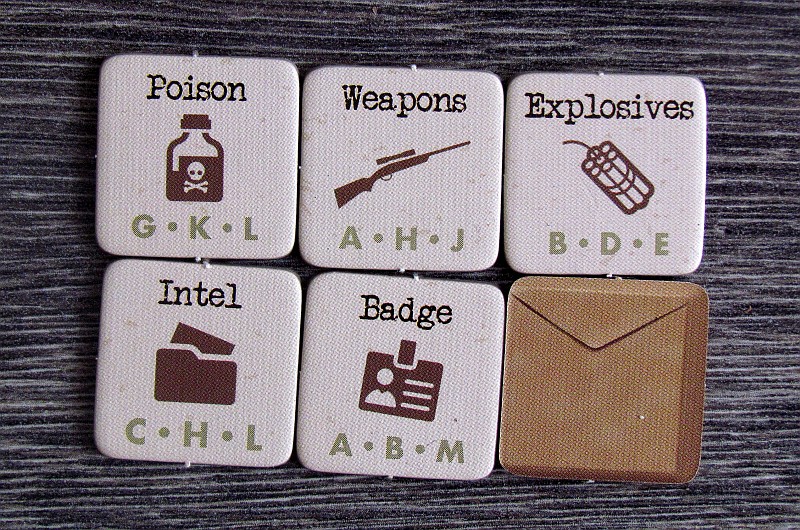 Black Orchestra is definitely a unique game, which is a little betrayed by the processing. This is not entirely exclusive and does not match the price tag. Aside from this one little thing, you get for your money above all a great experience, which is worth it. Especially if you like World War II and everything, that revolves around it. In this case, you should not read, but seek a box of Black Orchestra.

- processing
- success is about one roll of the dice

Blood Orchestra is not a game for everyone. To enjoy it properly, you must have a relationship with World War II, you must like cooperation, and you must not mind coincidence, that has the ability to completely destroy your effort. But if you fit into this narrow audience, then you will be able to enjoy an original and atmosphere-packed experience. Blood Orchestra is a pleasure for anyone, who has ever wanted to try to end World War II on his own.

by Dušan on 05. 11. 2018
The Vikings are really wild and unrestrained guys. There is no doubt about that. When you put a hammer and a beer together, you can get real [...]

Review: Kung Fu Zoo – animals are made of dice

by Dušan on 31. 07. 2018
Most of us think, that zoos are places, where animals are kept against their will. Or because they did not have any other chance and were born in [...]
Comments
Leave a reply