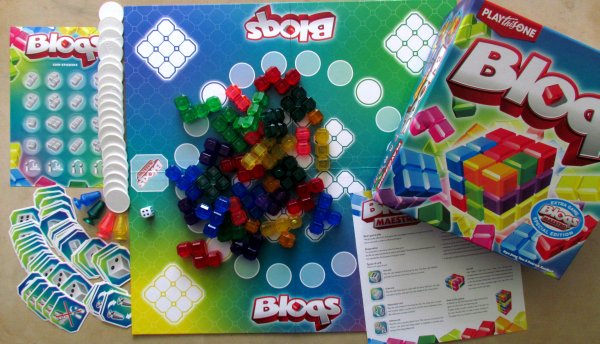 I wanted to build a house for me and my family, but I had no idea, how hard it is to find a skilled mason. One should look for the satellite for workers, who are good not only with mortar and shovel, but also with a ruler, protractor and mathematics.They are very small, when seen from up above, as well as other people, but their reputation precedes them and you will find them, when looking for them. And when they are placing a cube next to cube, they do their work with precision.

Now, players all over the world become an apprentice of one such master. If they can prove, they have what it takes, they can gain valuable name. All this is meaning of board game called Bloqs, that comes to us from Netherlands. Its authors are You Hyo-Jong and Patrick Zuidhof. Game was published from PlayThisOne as a novelty in 2011 with illustrations by Rick de Zwart.

The game seems very colorful at first sight and provides cheerful impression. At least with its box, which also attracts players by its weight and rumbling of components inside. When you peek under the lid, there are rules and folded game board with a square shape. This is suitable, because there is one spot for player in each corners, which makes the game look a bit like Twister. But on top of all that, there is one route circling through them middle with bank of tiles inside. 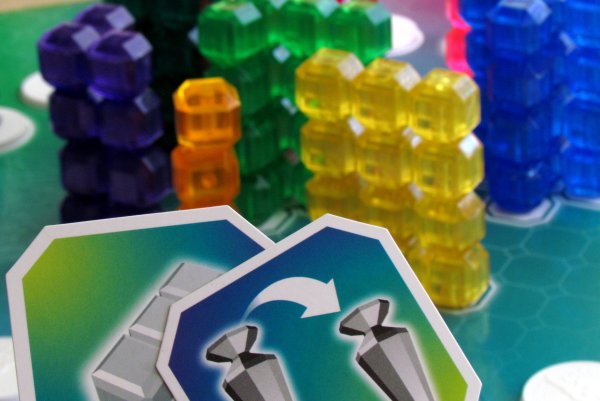 In order for players to fill all spaces of their buildings, they need several components, which are carefully stored at the bottom of the box. Most attention will certainly attract large compartment containing building blocks. They are, what the game got its name and it’s sort of classical Tetris pieces ranging in colors from yellow and green through to blue. There is together 32 pieces, four of each type.

Smaller opening is hiding twenty plastic positions tokens, feeling like a casino chips. They are white on both sides, waiting for players to fill them with stickers from attached sheet. You are ready to play only when you find pictures of each building shapes, but also four action symbols on these tokens. Players will also need four pieces, one dice and 54 cards to play. The last component is needed only with maestro version, which is not our prime subject in the review.

Players can choose to start the game with piece in their favorite color and at the same time they also pick corner of the board, where they will build their construction. But they must place the pawn on the table, because it is now necessary to prepare the board. Tokens are shuffled and randomly distributed in a circle. In the middle of the board, players now pile construction pieces on appropriate places. Only then can each pawn start its journey on the starting position, on spot with colorful border in front of its owner. 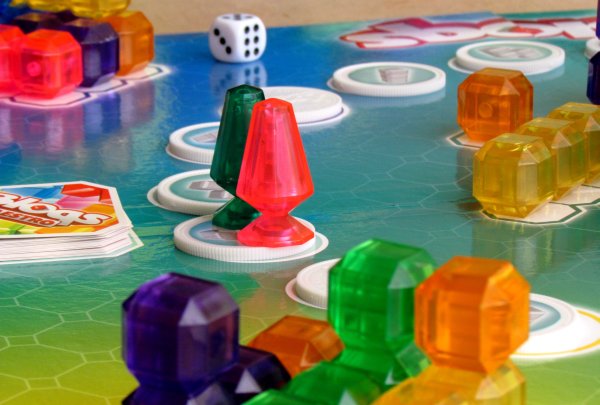 Characters will be running around a circle according to result of dice roll. Player can always choose, which direction to move, whether clockwise or anti-clockwise. Important is the place, where the piece stops its movement. If the round token is still turned face down there, player must uncover it. Symbol on it determines, what he may do in his turn. Most tokens specify shape of the piece, that builder must incorporate into their building site.

Target building has a maximum dimension of three times three, which must not be exceeded at any point. But such an excellent mason can not have any space left in each floor. Players must skillfully use the pieces and each floor must have all nine cubes built. Only then can they build on top of it.

But players can encounter two special situations. First is, when two figures meet in one place. Newcomer has opportunity to steal opponent’s one piece from building under construction. Another specialty are action pieces. They allow players to gain any building stone they like or just simply swap one stone with the opponent. 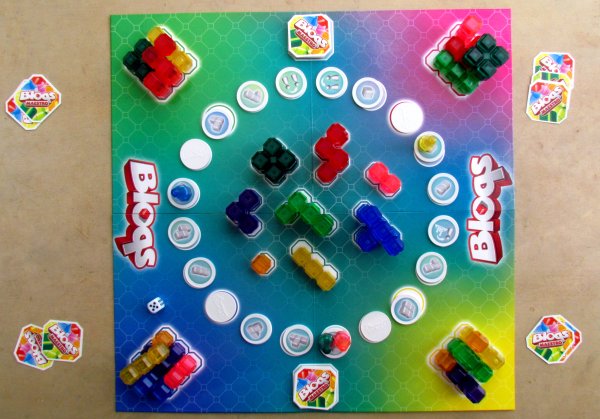 Clash continues and offer of building blocks decreases as players are all trying to do the same thing. To be the first to build a perfect cube measuring three times three times three. However, it may easy happen, that some piece exceeds the third floor. And this means a problem, but fortunately, there is one more victory condition.

In such a moment, player should start to build and complete as many floors as possible. Only in the moment, when every player fails to build cube of target dimensions, game then continues until the supply of stones in the middle runs out or players turn all tokens around. Winner is then determined by the number of completed floors. Player with the highest building (or one, who built a perfect cube first) is winner of the game.

Bloqs are interesting building game and in that regard, its all simply getting cubed. It’s not easy to fit those different tiles into tightly given dimensions, but most of pieces is smaller and longest have dimension of only two cubes. This allows players to compose them well on their site and with a little skill (and luck), they can truly build their dreamed cube. 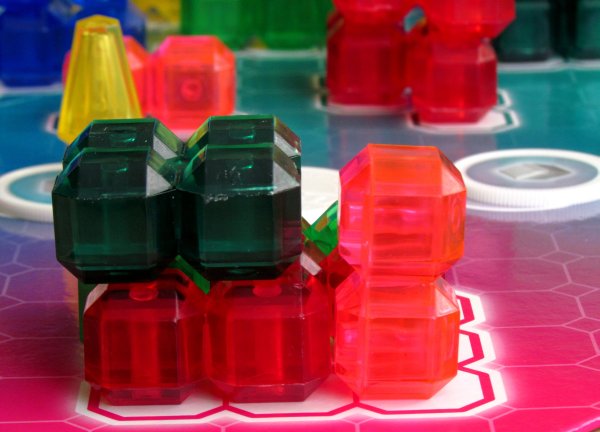 Players have ability to influence the game, although in the beginning, they are running around and blindly picking tokens. At that moment, everything revolves around luck, because no one knows in advance, what is hidden on which chip. Fortunately, initial random disposition of building tokens also guarantees variable entertainment. At the same time, however, this is just a starting part of the match. And its a good solution, because in case of of full control from the start of the combat, winning situation would be too simple to achieve. But now, players have to adapt to their starting tiles.

Luck of the game gets weaker as time of match goes forwards. Players always can choose direction of movement in their turn and thus choose one or the other action. It is often a choice between one building block and different one. And a lot depends on this selection and ability to incorporate shapes into their buildings.

But there is still one more important decision to make. Player must perceive early, if they have a chance to build a perfect cube. At the moment, they can be beaten by anyone from opponents, who accomplishes a complete cube. But chance for victory is still alive and it will be decided by height of the pyramid. 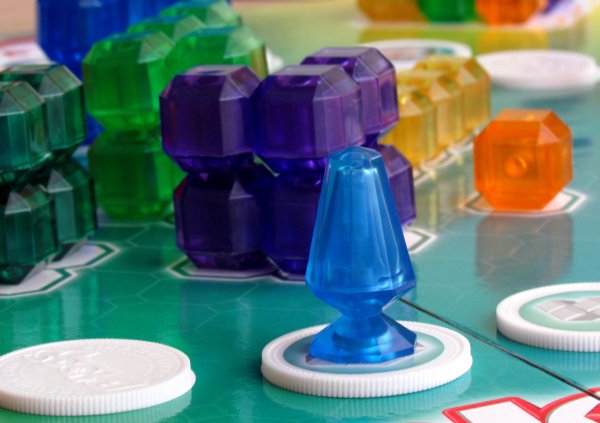 The game provides a guaranteed dose of interaction. Players can even purposefully attack each other, as they enter a spot, where a rival character stands. Replacing one cube in his building can be fatal for the opponent, because this is the moment, when it is possible to completely destroy a chance for building a perfect cube.

But in the end, players are peacefully building most of the time and they can really show off, how can they work with pieces they get. Whole game has a rapid course, because there is not much going on in individual turns. Basically, a player can take a piece and while building, next opponent can already roll the dice. Game then flows very well regardless of number of players. But its still better with more people, which leads to a greater number of contacts and less predictable outcome of building itself.

The game in its basic version is really accessible to all, but only with additional rules, it becomes really succesful fun. Maestro version adds three cards for each opponents in the beginning. You can then use them instead of rolling dice to gain targeted one stone, move your pawn or defend against enemy attack. With them, players gain even more control over development of the game. 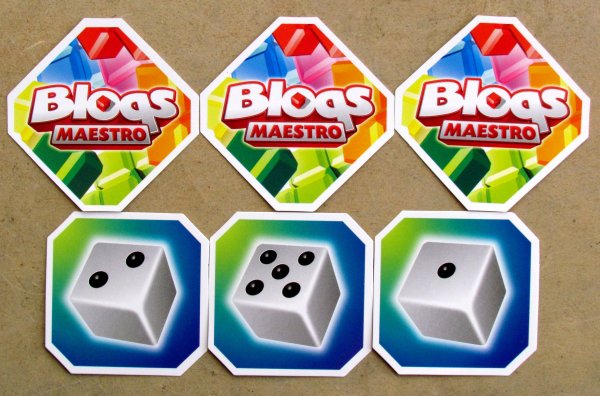 Processing then definitely deserves praise. Although players must put sticker on tokens themselves, and whole game has a parade appearance. Player pawns look as they fled from Star Wars and tokens are of great quality, as well as game board is sufficiently extensive.

Bloqs is a pleasant surprise, that is set as a fun family game. It is still stacking fun, that will not thrill any opponent of building games. It works great with children and parents, while game is simple, but surprisingly tactical. Random disposition affects only first few turns, but Bloqs are eventually great fun.

- random
- building games are not for everyone