by Dušan on 24. 04. 2020
0
previous article
Review: Wetthüpfen - little jumpers on the hunt
next article
Review: Dungeon Degenerates Hand of Doom - doom for all gourmets
Contents 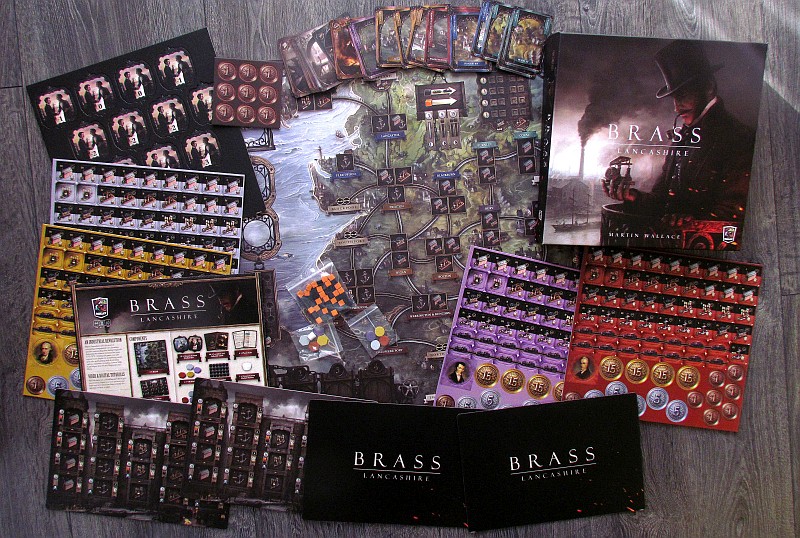 A few years ago the world seemed to be huge. The distant lands were unreachable, but only until wild steam engines set out on the tracks. Suddenly we felt on the wings of the trains like birds, moving at great speed toward our target. Ships no longer have to rely on the wind to support them, and a lot of smoke flows from the chimney. World shrunk.

The players are returning to the times of coal and steam through the board game Brass: Lancashire, prepared for them by well-known designer Martin Wallace. This game was originally from 2007, when it originally went into the world with a simpler name Brass. But now, thanks to the care of the publisher Roxley has seen a new deluxe edition, decorated with illustrations by Lina Cossette, David Foresta Damien Mammoliti. The game is distributed throughout Europe by Esdevium Games.

Although the box has a large square dimension, it is a drop lower, than we are used to. The lid is very dark and enveloped in clouds of smoke, but we still see the industrial scene, and above all, one of the important figures of the technical revolution. Players then begin preparation by laying out a map of city Lancashire. In the left-hand side of the board, there is a place for shuffled cards, just below it is space for the tiles of wool and the scale of the same goods. However, players will also watch coal and iron stocks, whose cubes are distributed on the board in the starting amount. They also spill a stock of coins to form a bank. 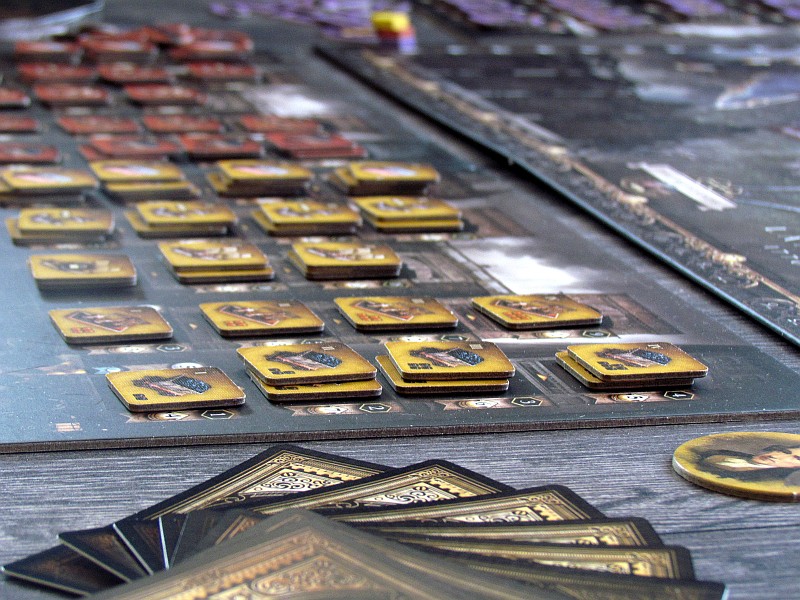 Each player gets his own board with factory positions. He gets workshops for wool, iron, but also coal mines, ports and shipyards. To get started, everyone gets thirty pounds, eight cards from the draw pile, choose their character and place it on the ranking scale on the common board. At the same time, this color also determines which set of connection tokens he takes. After that, the pointer points to zero on the scale, and ten on the income indicator.

The games are divided into an era, which is measured by a complete set of cards to draw and each participant always draws two at the end of his turn to have eight in his hand again. In a single turn, a player can perform exactly two actions and pay for each of them one of the cards he holds. Participants can thus connect locations in the city using their connection tokens, but they can always only link to the location where their rail or water system leads. He must pay for such an expansion with coal and, of course, with the saved pounds. 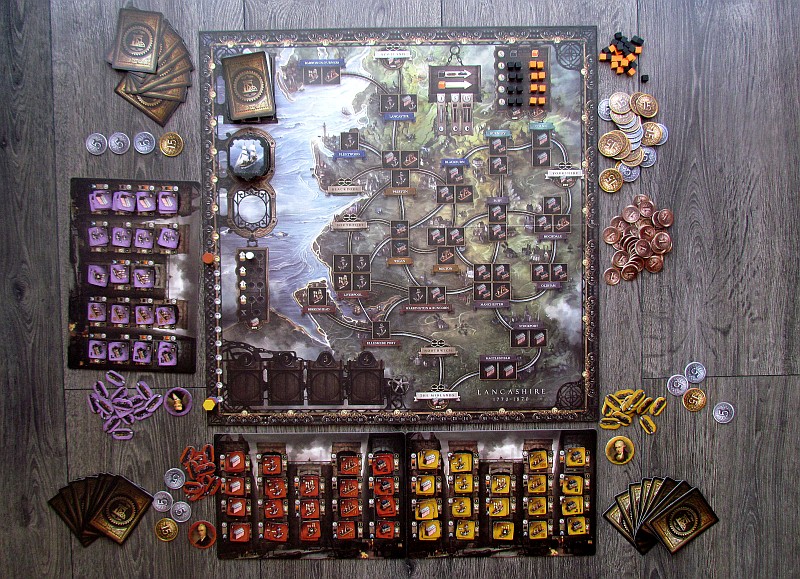 Most actions can be done by discarding any card. But then there is one where the kind of card is essential. Only with the right card can a player raise a building. Either he must have a card of the location in which he wants to place it, or, on the contrary, card must correspond to the type of building that should appear on the map. Players can only remove the building tile from their plan from the bottom up and pay for their position not only with finance, but also with resources that complement the offer of shops in the upper right corner of the plan.

There are other actions related to buildings. In order to allow players to access additional tiles, they can use a development action to remove one tile from their industry board. They’ll pay for it with iron. Players can now sell wool factories and increase their income on the scale. The last action is a loan that will bring immediate money to the player, but will reduce his income. We must not forget that even for all the above mentioned activities one card must be discarded. 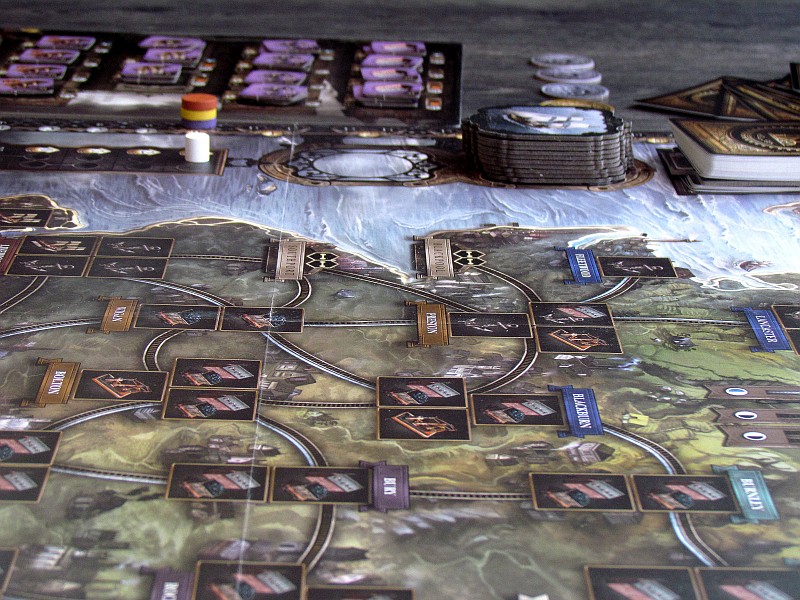 At the end of every round, the order of players may change depending on the amount of pounds spent. The one who spent the least will start. Above all, however, all receive income according to their position on the scale. Players may be in a situation where some pounds must be paid instead of profit. At the end of each era, players finally get victory points for interconnections and industry inserts. At the very end, players get points for the remaining finances and the winner is the one who has the highest victory points score.

Brass: Lancashire is a somewhat different, more advanced and strategic linking game. It’s not enough just to collect cards, as in Ticket to Ride, here all have a much greater depth. Especially in financial point of view. Yes. Above all, you must continually address the economy. Maintaining a good income is essential, so it pays off to sell buildings, which are then scored. 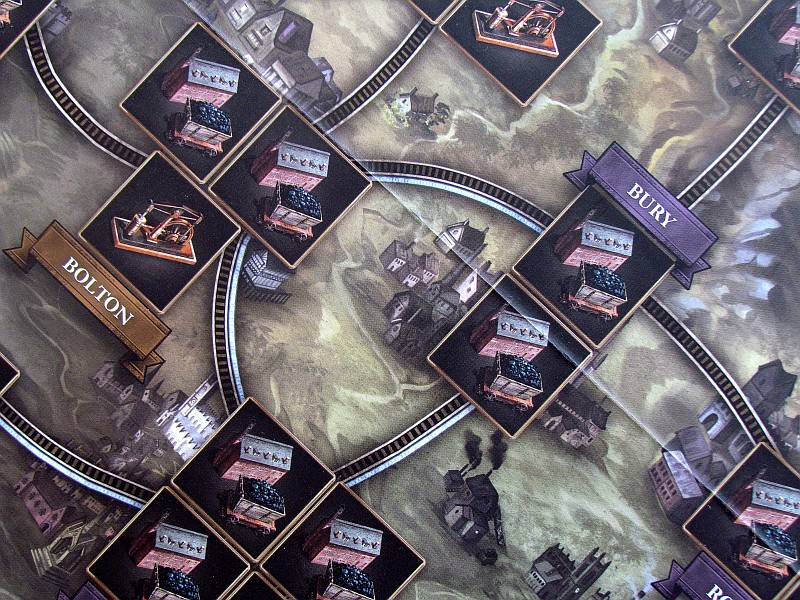 Equally important is the ability to handle cards well, choose the right ones to discard (spending on actions where the card you play), and then pull out the real trumps in building the link. These remain the main focus and the focal point.

Deciding the first player based on the amount spent is very tricky. This puts players in two different situations. In one view they would like to spend more, expand their empire and earn points, but on the other hand they want to be in a particular place in order.

There are enough possible tactics in the game, that your transport company can take. And they all have a chance of success. That’s why everyone who likes the challenge and a good portion of planning will grow to love this game very quickly. 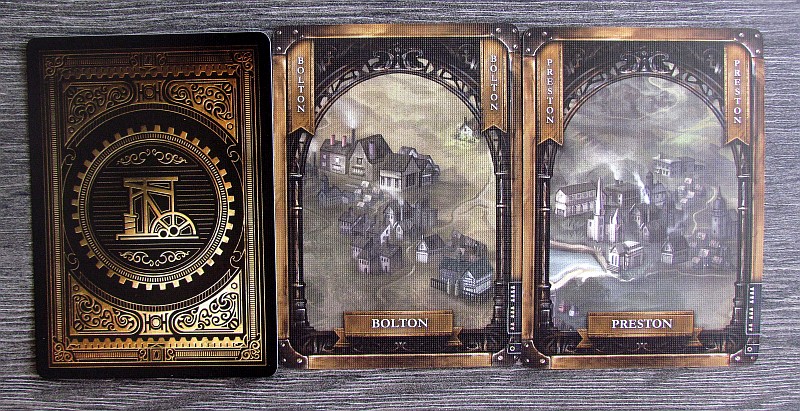 On the level of tactics, however, there is a solid portion of chance, which is reflected in the drawing of shuffled cards. Such an advantage is then substantial, despite the fact that most actions are done with cards regardless of their graphics. Another difficulty can easily become for fans of the atmosphere an overall dry and dense theme, which is interestingly set, but generally does not come through the game so much.

On their own boards, players actually have simplified technology trees, where they get from the basic buildings up to the more advanced ones. It is possible to replace buildings in the game. The game takes place on the border of two periods, when the canals are built first and then the railway. The development of the game is due to these two parts quite interesting and it benefits from the change in gameplay. 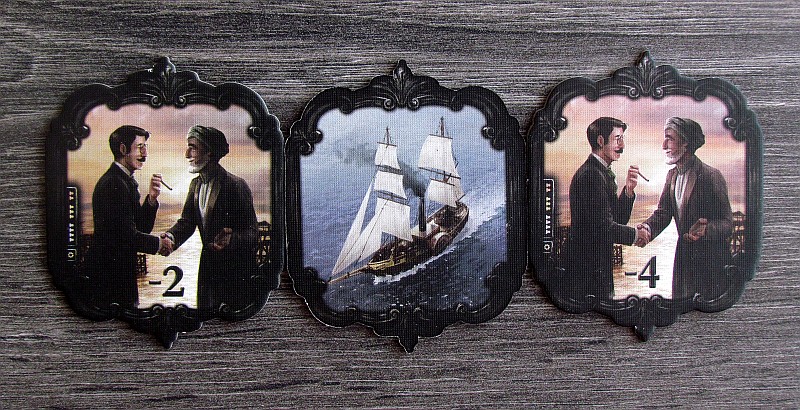 There is no doubt (from the first impression onward), that this game is really dense and challenging. And it is excellent in two, but higher numbers promise even more. It can exceed ninety minutes easily, if more players take part. And in four, the duel itself is the most exciting, because there is enough competition on the board. But it takes time to complete.

Brass: Lancashire is a great tactical game that excites every lover of planning and connecting games. The processing may look very dark, but the graphics are good and the game works overall. The thoughtful content is delicious and will delight all demanding players who will be happy to be absorbed by the smoke of the industrial revolution.

Lancashire is a city, that urgently needs a transport network. And that's exactly what the Brass board game will see. And you will have fun doing and connecting it all. Although, its not entirely fun with some problems around time and theme. Still, Brass: Lancashire is a great game.

Review: Ticket to Ride Nordic Countries – railroads in the north

by Dušan on 17. 08. 2016
Every now and then, you ride by a train. That's because it's a nice feeling to watch the passing scenery around knowing, you are pulled by machine with [...]
Comments
Leave a reply