10
new
Review: Dragon’s Breath The Hatching – with egg on top
Review: The Aquicorn Cove – saving the day.. and bay
Review: Fuji Koro – the storming mountain refuses to release its treasures
Review: Find the Code – search for treasure chest
Review: Black Orchestra – a secret operation in the past
Review: Dragon Keepers – children of fire
Preview: Chronicles of Crime The Millennium Series – chronicles of crime on a journey through time
Review: Cloaked Cats – Invitation to the Cat Ball
Review: Robin Hood and the Merry Men
Review: Miyabi – art in your garden 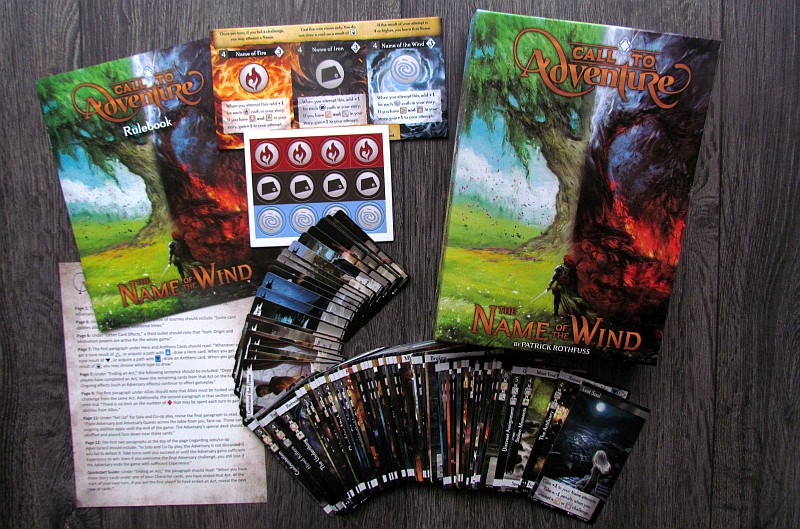 There are a lot of fantastic worlds around us. Some get a lot of attention, while others are known mainly among fans. And such a series is the Chronicle of the Kingslayer, which tells the story of Kvothe. Author: Patrick Rothfuss.

According to designers themselves, they book series was supposed to be at the birth of this popular board game Call to Adventure. And just as a tribute to the writer, they dedicated the first expansion to first book of the cycle – The Name of the Wind. Under the games itself, Brotherwise Games publishing house is signed. The new release dates back to 2019. And it came to us thanks to the European distributor, Esdevium Games.

The box is quite small this time, but the height is the same. Their storage together will be a breeze. On the lid, we see a tree split between two worlds – one beautiful green and the other burned by malice. Inside, there is one board of naming rules waiting for players, but above all a lot of new cards. Specifically, players will find 12 cards for the first act, twenty for the second and 21 for the third, then character cards and, of course, some hero and antihero. In addition to the board, there are new sets of name tokens. 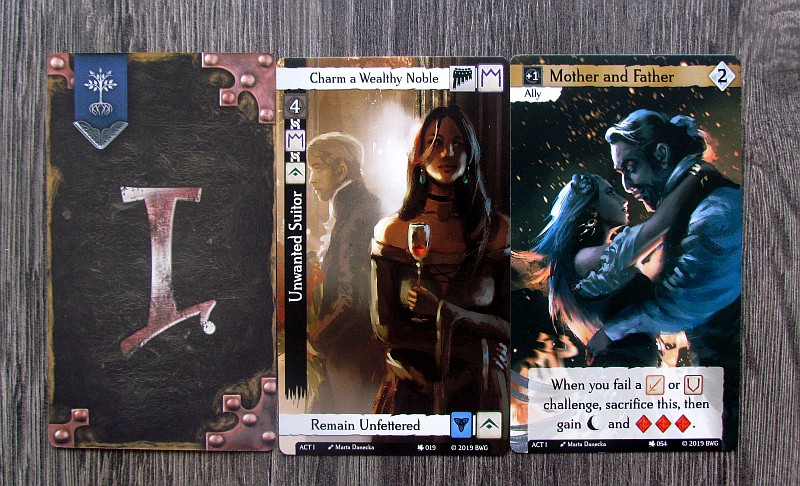 Call to Adventure is a game that is very successful in telling a story, although it is actually just about playing cards. But at the beginning, players prepare their heroes, which is a composition of three cards – origin, motivation and destiny. Players always choose from a random set, but at least partially control this part. Once everyone has a character, they begin to write his or her life and deeds by choosing cards of heroic actions. But while performing each task, players have to throw runes, another unique mechanism of the game, hoping for success. Players receive corresponding rewards in the form of points, which ultimately decide on the winner.

New expansion cards are designed to bring best experience of the book series to the table. As a result, you will not simply add them to the existing pile. The new cards will replace some of the older ones and thus adjust the overal experience. The changes mainly concern the act cards, but also several fates and enemies. The icons will also change on the cards. Music is now there instead of nature. 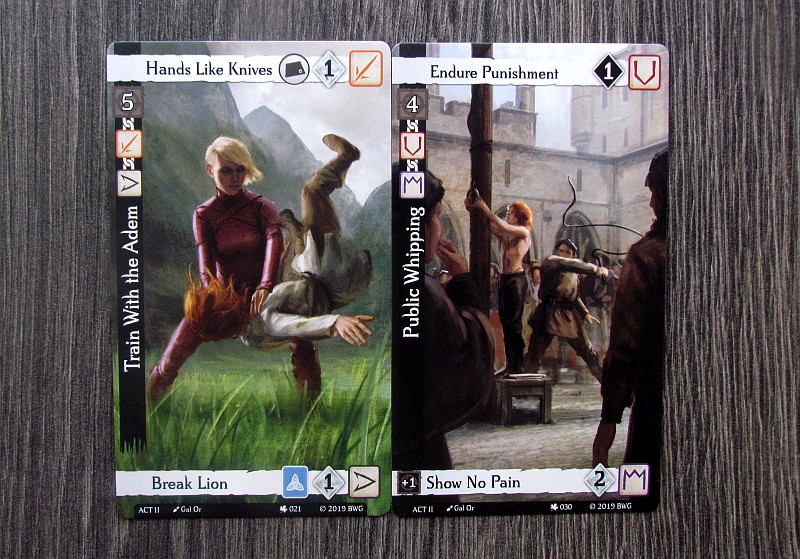 However, the main content and the only novelty of the whole box are naming rules. But these are not the classic names of families and people as we imagine them. These names show that the hero has understood things so deeply, that he can master them. The box offers three elements to control – wind, fire and iron.

A player can only attempt to get each name once. That happens, whenever player fails the challenge in that round. So it acts as a kind of consolation price. Each name can be obtained only once. And its crediting is not just about earning three points, but above all it will allow all upcoming exams, in which this element is represented among the requirements, directly meet. 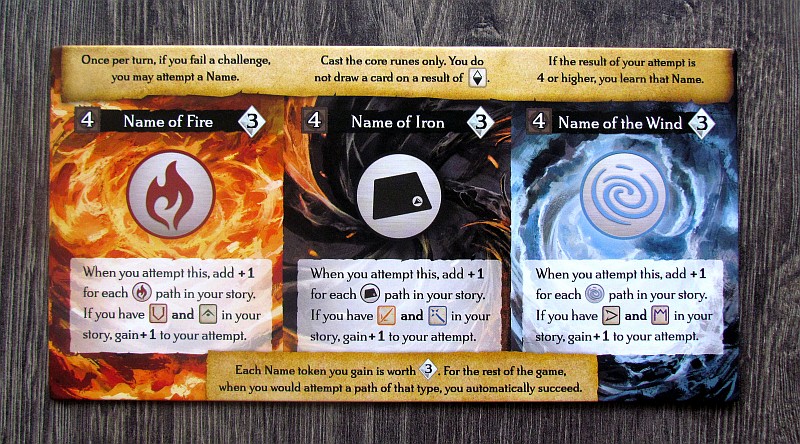 The novelty is interesting, but it does not have any influence on the course of the game. Cards with requirements for a particular element are not so many, but the name gained can still be an advantage.

The main change are the cards themselves and here, all players appreciate the variability. New images are not everything, because cards have different requirements and effects. But the main audience will still depend on whether the player has read the book series or not. Many cards are quite dependent on knowledge of the story.

It is good, that the authors realize the narrative abilities of their game. Linking it to different book series is a great idea, since when will you ever have the chance to create your own stories from your favorite worlds? We sincerely hope that there will sometimes come a sci-fi edition of Call to Adventure on the market, like Call to Space, because here too the possibilities are great. 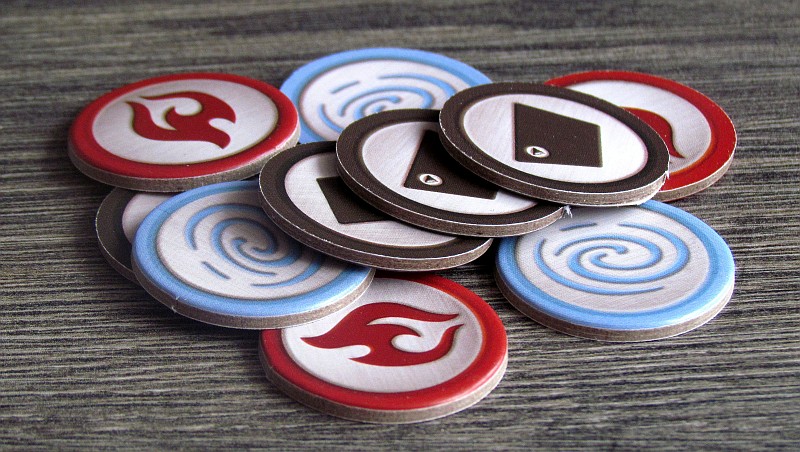 Your opinion of Call to Adventure: The Name of the Wind will largely depend on whether you have read the book Name of the Wind or not. If so, the new cards will have a special charm for you, which will enhance the impression of an already excellent game. If not, then the new box may be interesting for you in terms of new cards. But someone would rather wait for the next expansion, than to arrived in a completely foreign world.

by Dušan on 16. 12. 2019
I could think so! As soon as I start thinking about myself for a moment, went to save the princess and left the royal city unprotected, the enemies attack. [...]
comments
Leave a reply