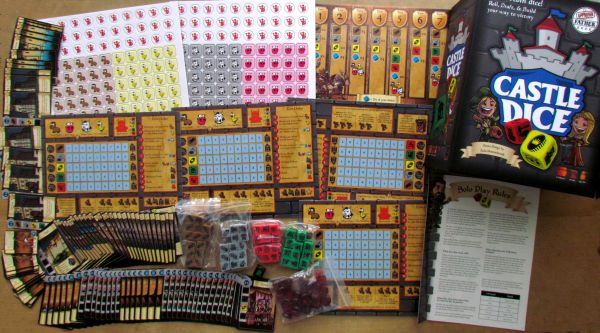 When I arrived at the castle for the first time, I thought all of its residents are mad. Bricklayers, masons, carpenters, all were processing and using dice as their base material. Ground is paved with them instead of mortar, they are embedded into the supporting columns and statues in the middle of the courtyard are created of them.

At first I did not understand, but after an audience with the king, it is all clear to me. Their chief astronomer predicted, that it was only dice, that can protect people from the coming disaster. Apparently, I cannot imagine, how these dice should repell hot stones from some rain of fire. I do not know, how much should I trust man, who is constantly looking at the stars, but then why not. Dice are material like everyone else. So let us start building.

And you will build a castle of dice and in new board game Castle Dice from Luke Peterschmidt. Game comes under the umbrella of Fun to 11 and it was originally published in 2013. Its illustrations were prepared by Sam Cube and Nate Lovett. 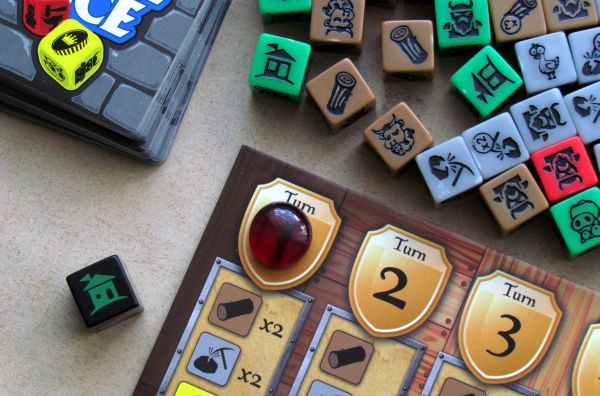 The game will surprise you for the first time with its huge box, whose smaller footprint in two key dimensions is compensated in depth. Height of this box exceeds ten centimeters, its spacious, but it’s very difficult to carry anywhere. At the same time, it looks like there is not much components inside either, based on weight. But the game differs sufficiently among all others.

When you lift the lid with a massive castle, a bard and dice, you come accross brochure with the rules. This, fortunately, is not bulky and manages to get players familiar with the content on ten pages, containing preparation and actual game. It suggests at the same time, that Castle Dice will not be some beginners game. At least not from the start. Underneath it all, you will find four boards with lots of tables on them. The most important are five lines with numbers in the middle. These represent stocks. Equally important are also frames for animals and barbarians at the top.

And then there is the common board, which is composed of seven columns (rounds) and dice collection for each player. One more sheet with tokens representing aforementioned animals – horse, cow, pig and chicken – completes larger components. Players will be able to introduce these animals to their backyard. Several transparent stones are used as indicators. 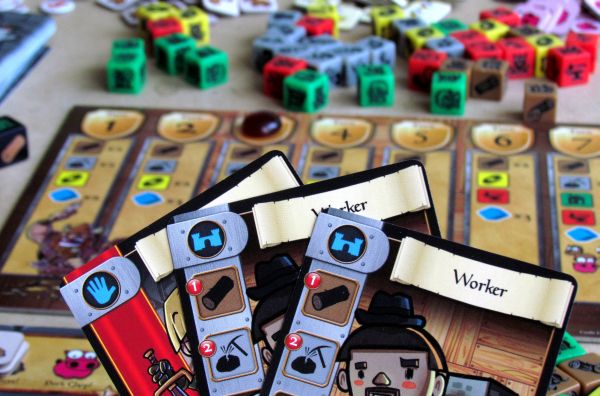 The most important components are cards and dice. There is not so many of the first ones and show improvements for the castle (classic card), but also single action cards, that can be bought at the market (small size). On building cards, you will find number of victory points in asterisk, but mainly raw materials requirements for their completion. And of course text describing its ability.

Among the cards are well mixed also others with brown rear. They represent characters in the game, and they create a so-called village deck. And then there are building blocks of the whole castle – dice. There is precisely 64 of them and have all sorts of symbols and colors.

At the beginning of the match, you spread tokens of animals and villagers and of course create piles from cards. In addition to the above-mentioned villages, you have to also shuffle the pile of building and marketplace. Near all of these components, journey of dice begins as well, sprinkled nicely on the pile. There is no reason for their separation now. Common board should contain one stone for monitoring actual turn. 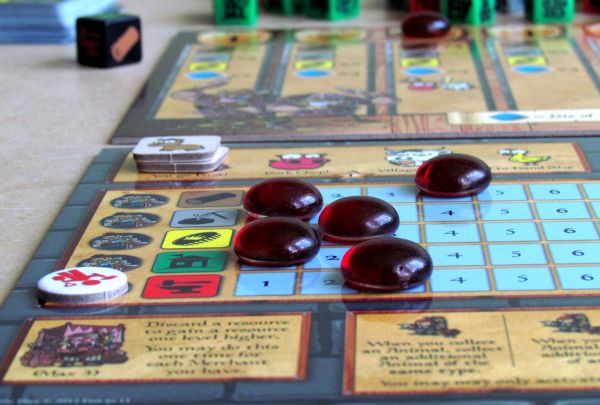 Each competitor takes one board for himself. Each of five rows must contain one stone, which will track their amount in your storage. You then of course spend them for construction of some buildings, so you complete a successful castle in the end.

At the beginning of each round, players first draw cards back to given maximum. Any combination of village and castle cards can be used, just according to their wishes. In next turns, there is even an option to discard any number of unwanted cards before drawing. Now all players must take a prescribed set of dice (based on common board) and few of his own choice.

Now all players roll with them and sort out all results with barbarians. These warriors without an ounce of compassion will try to attack the castle. Dice are therefore put on player board directly to spot dedicated to barbarians (besides the animals).They will be a threat only in the future. All other dice are then (without changing the symbols) placed in center of the table, where they form bank of basic raw materials for the round. From there, players gradually pick dice one by one and increase goods in their warehouse by its value. 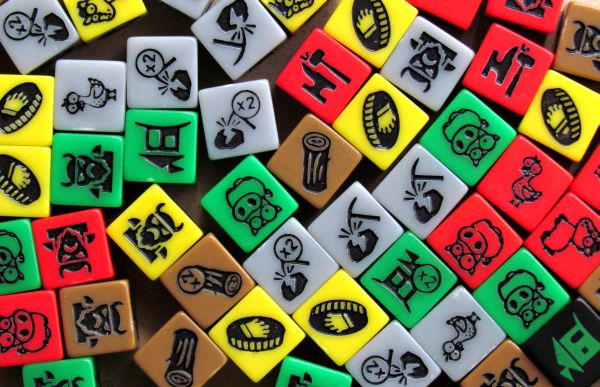 It is time to lead the animals on the market, if a player wants to. It must, however, be a set containing animals from each one. You get a card from the market as a reward. Then comes time for construction. You can complete not only buildings, but also hire new villagers into your service. Everything is based on played cards. Such a worker produces one piece of goods in each round, based on location of his token, while trader allows you to improve raw materials for the better. Both types of cards have printed requirement of raw materials on them and player must reduce his stock status accordingly.

During each phase, you can play some cards that can improve your action, for example, your dice harvest. Each card has a symbol in its upper left corner, which indicates stage, when it can be used. This gives the player a drop of greater control over luck.

Before the end of the round, barbarians finally completed preparation for their attack. For every raider present on his board, player must reduce the number of his raw materials by one. This is the amount, that barbarians stole. Next round begins, so everyone continues with building, until seventh turn comes to an end. Everyone then adds up victory points for building and some cards. Player, who has the most valuable castle can celebrate victory. 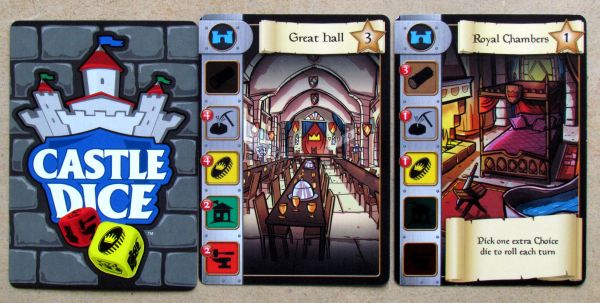 Castle Dice is a game about building a fortress, and that’s exactly, what it does well using unpredictable dice. They are used in a clever way. Each player contributes to creation of common stocks of raw materials with its share of lumps. In addition, everybody has possibility to determine several dice according to his own wishes. This is important, because each dice has a slightly different set of icons.

The biggest battle starts after all dice are in the middle. Then everbody tries to grab dice with double material icon. At the same time, players must watch their tactics and adapt to cards, they are holding in hand. Without required materials, you will be unable to use reserves to build. Turn is organized nicely, because income phase is followed by building.

Animals are your way to benefits, if you have most of them. Hens increase hand limit, horses determine starting player. It is therefore no big reason for players to get rid of them in exchange for random card from marketplace, even though they provide some significant advantages (such as rerolling dice with Barbarians). Everyone is trying to get breeding supremacy, rather than fight for one-off benefits. But this is a tactical way, that can be followed by some players and this choice is thereby enriching the entire game. 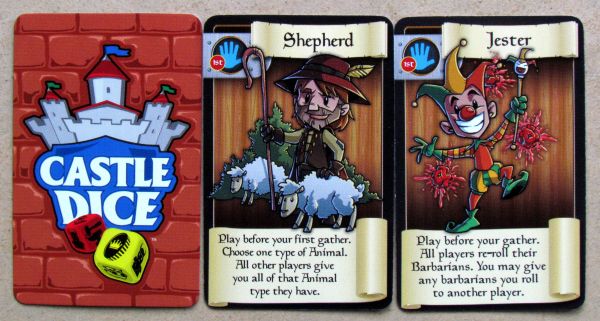 Variability of the game lies in the results of different dice and other part in castle cards, that come to your hand. Unfortunately, it does not guarantee, that each match feels sufficiently different. After ten games, there will be no surprise, perhaps only those dice and unpredictability of raw material bank.

Buildings do not only provide victory points, but also some abilities, that can be used. But there is not enough of them to disrupt opponents tactics. Castle Dice is not focused on rival gameplay. The only significant element of the attack si again related to animals and market with cards. This game therefore provides mostly solitaire play with common dice.

Barbarians and bad luck can together ruin you plans. If you roll more of them on your dice, you can lose several ingredients in one turn. You can use them, before that happens. And there is also way to protect yourself from invaders. But here again you need luck, this time to draw cards. In case you do not draw guard in time and you can as well lose your materials. And it can create a sense of injustice. It is precisely barbarians, that keep players on their toes and divert their effort from just mindlessly tweaking their castle.

Due to its simplicity, Castle Dice works best as a family game. It is also a consequence of the already mentioned randomness, which can easily discourage experienced player. And also game time helps it a lot, because it easily gets under one hour. Even this can be too long for dice fun. It depends only on what you like. The game works perfectly in two. With more participants it becomes a bit slower, but still contains enough action due to the fact, that most parts of the game can be performed simultaneously.

Processing is really nice. Dice are excellent, all the boards are solid and illustrations as well as information on cards work great. Rules are written in detail and answer all your questions except one – why is there this unnecessarily huge box? One more detail to add – illustration on animal tokens are a little distant towards other graphics.

Castle Dice is a representative undemanding dice entertainment. If you approach it with the right expectations, you get a very funny and original mixture. The actual dice rolling and combining them with the results of others is so much fun. And building a castle as well. Yet some experienced players did not like taste of this cake. Castle Dice can be definitely recommend to families.

Castle Dice is a game, that is ultimately a little inconsistent. It is a good choice for families, where children will enjoy fun with dice and will not mind, that everything takes a little longer. Experienced players will complain about luck in the cards draw and dice, whose influence can be cut a little, but not quite. Barbarians make their raids based on your rolls. Still, the game is inherently fun and it owes it to dice. They are merged into one big pile with ability to draft from common stock, which is fun. Despite the fact, that most of your choices are predetermined. In later matches, you will be missing a bit of variety, but everything is still saved by processing. Castle Dice is therefore a good choice for families with children and works well as an easy dice fun.