by Dušan on 06. 02. 2013
0
previous article
Review: Das Letzte Bankett - murder on a feast
next article
Review: Amber - unpredictable journey through the Kingdom
Contents 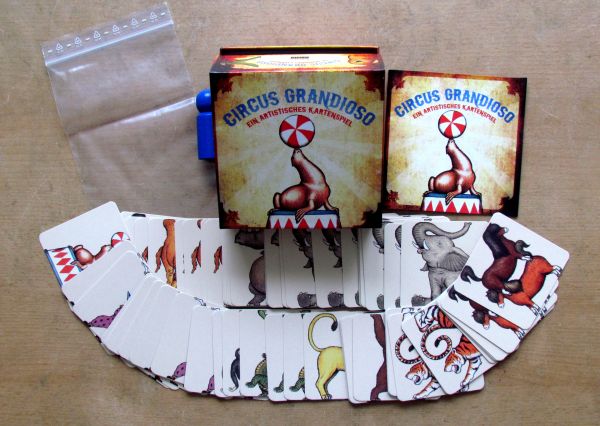 Ladies, gentlemen, boys and girls! Circus Grandioso welcomes you! Enter, just enter, sit down and let yourself be enchanted by the art of our artists! Man walking on a rope on his hands, woman swallowing flames and what about the animals? Have you ever seen a thirteen floor high pyramid? Do not hesitate to visit us tonight! The top of the pyramid will reach to tip of our tent! You have to b ethere to see!

If Circus Grandioso was real, maybe it would look something like this. Cars passing these messages through town and enticing the audience into their tent. And many would be captivated by vision of a huge animal pyramid and thrilled to look at something, that’s never been seen before.

But since you’re lucky, you do not have to go anywhere, and you have to pay for a circus ticket only once. Reason is a card game Circus Grandioso from Racky Spiele. Its subtitle is “artistic card game”, which describes it perfectly. The author’s name is not mentioned in the rules, but we expect that it will stand for Florian Racky himself. Lovely graphic was prepared by Jonathan Pecna and the game was released in 2012. 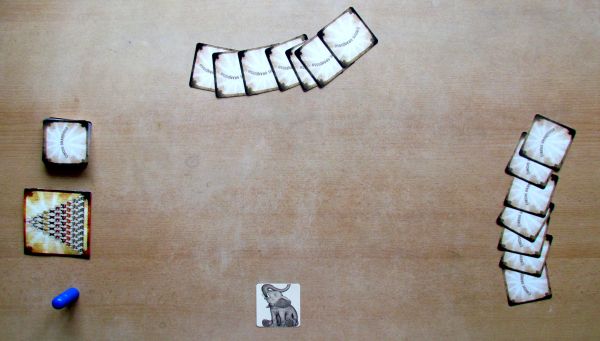 It’s a little card game, which also corresponds to the box size. It is square in shape, just as 63 cards inside are too. Fifty-five of these features animals, from which you’ll build a living pyramid. The remaining eight is wearing drawing of clowns, who can stand in for four-legged creatures in case any of them is not available. They can therefore be regarded as jokers in future of our review. On each floor, there may be only one clown present, no matter what.

Each of these animals is present in an exact and unique number in the package. Ten elephants are the largest group, because they form base of the pyramid. On their shoulders come rhinoceros in nine exemplars, then eight camels, and so it goes on through ponies, bears to the very sea lion with a ball on top.

In addition to the box of cards, you will found only one piece of pyramid builder. This pawn will be exchanged among players. And there is of course also a booklet with rules in the original German, but also in English language. The back of the rules, then contains a great help – image of already built pyramid, which will definitely help you find a position for each animals within the pyramid levels. 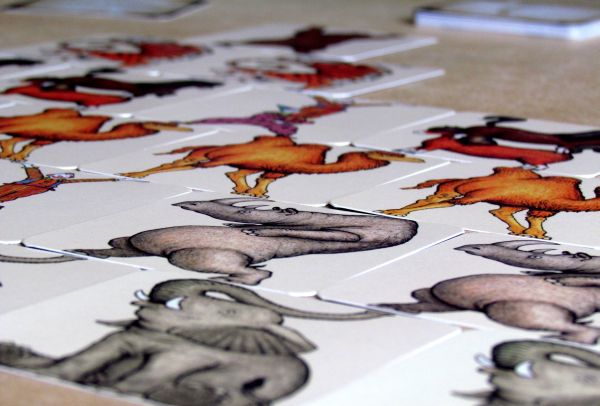 Each row has fixed information about an animal, what it can contain. The exception is always one clown. By the beginning of the game, you lay one elephant in the center of the table, and each player gets his hand of seven cards. His task is to get rid of them all. If he succeeds as the first, the game ends and current holder of builder pawn is the winner. Yes, that’s THE twist!

All other cards are shuffled and set aside. They will form a drawing pile, from which you can draw instead of using those cards from your hand. You are now ready to start building the pyramid, animals are at rest, viewers are in tension, so get to the taste of it and see, who is the best builder. Each player will be scurrying around the pyramid as an organizer, but only one of them can be the best and have biggest impact on how amazingly the pyramid looks in the end.

Applause is always meant for the one, who manages to get his creature to the top of the pyramid. He is not only encouraged by the audience’s applause in his work, but he also gets builder pawn, whose property at the end of the game determines the winner. 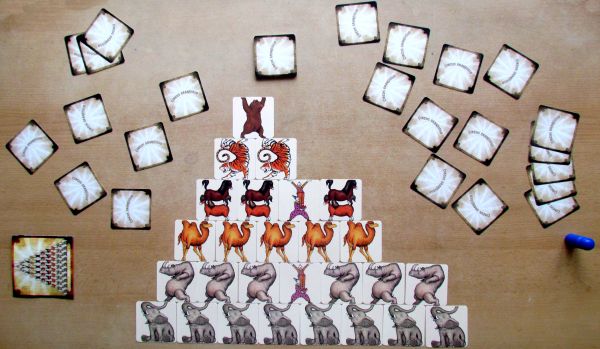 Restrictions on pyramid building are otherwise really simple. Animal into a new higher row can always be lifted only in the moment, when there are two animals in the lower line holding it. With each floor, pyramid gets a little more wide. New elephant can then be added only in the moment, when there are no more free space on this side of the pyramid up to the top. Only at that time, you can extend it by another elephant card.

On his turn, a player has exactly two options, which can be done. Either attach the card to the pyramid in a right place according to limitation we have told you in former article. Or he can exchange one card from his hand. This is done in quite intriguing way. He puts card, which is thrown away, anywhere on the table face down and remembers its location well. Then as compensation, he takes top card from the deck, or another card, that is already lying on the table face down from any of earlier turns. This card can be anywhere on the table, so he is not limited only to the ones, he has thrown away.

But back to the first, crucial and most important option in turn. You can actually attach card from your hand to the pyramid. And it has to be correct animal for correct row, but we already know that. It also has to be supported by two other creatures. But you can also take a card from the table and put it directly on the pyramid or even take a chance and try to draw new top card from the deck and try to attach it. 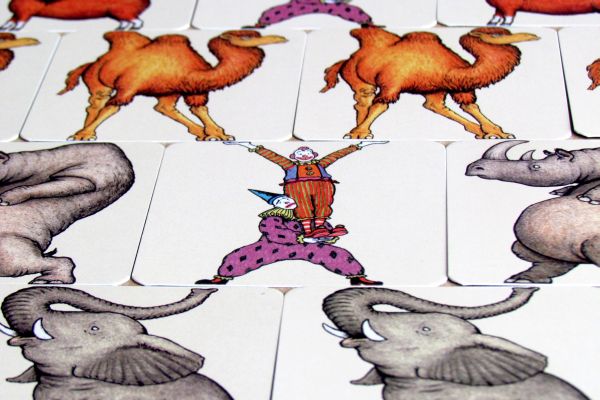 Only cards from the hand are a sure thing. In both other situation, you risk from time to time to get into a situation, where you take the wrong card. This means a card, that cannot be currently put anywhere on the pyramid. But it does not matter. You try to remember it well and place it somewhere on the table. But this is time, when your round ends. Otherwise, when you are placing correct cards on the pyramid, you can take any number of consecutive turns, as you can. But when you fail, you immediately end your turn.

There will naturally be quite large number of cards lying on the table and it perfectly thickens the players head. Soon you get into a situation, when you have no clue, where you actually put those cards from the beginning of the game. You should remember it, but you are simply not sure. Then it’s time to risk.

Anyway, the game ends, when a player manages to put a seal on the top of the pyramid. But it will happen very, very rarely. Most games end with one player emptying his hand and adding his last card to the pyramid. In that moment, he is not declared the winner. The most successful builder is the one, who is holding builder pawn – meaning, who has put the last animal on top of the pyramid. This way, the game is much more interesting. 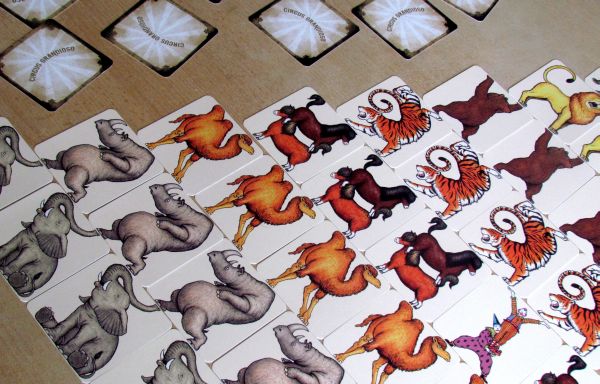 This fact has a great impact on your tendency to end the gameplay. You often came to having a card in your hand, which you could use, but you do not want to, because it will make you lose. It is not a pleasant feeling, so you have to work with cards on the table and with your memory. Because you cannot do anything with the one card left in your hand.

These cards laying all over the table are source of the greatest gaming affliction. In the beginning, when only a few cards are with picture down, you can easily remember their location and use them. But as the game goes on, it gets harder to keep track of their location, until you ultimately drown in your own memory.

Only the luck is your enemy. Cards in the deck are not a certainty. But seven cards at the beginning is enough to be able to work with them and replace the ones that suit you the most. But your rival will try to do the same. And he knows a bit of information, that you do not and the other way around. In the overview tab on the back of the rules, you have a clear overview, how many animals of each kind are actually somewhere to be played. This means also the chance, that you get this animal into your hand. 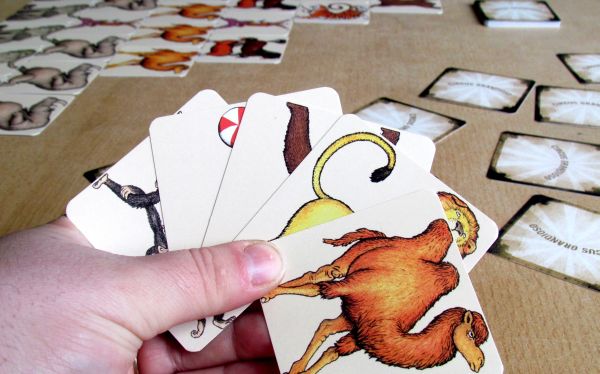 Cards, which you draw in the beginning, can very much decide the whole game. Their randomness can cause, that your enemy might have only some elephants, clowns and rhinos. In that situation, he is really close to winning. But only until you play some animal on top and get hold of the pawn. He might run away, play most of his cards and wait only for the last one. This guarantees him an easy win. No tough remembering necessary. This problem is mitigated, when playing with more players. And the pawn also is great way to lowering the chance, that bad luck will get to you.

But it does not matter, because whenever you fight with your memory or luck, you still have a good time. Building a pyramid of animals is relatively simple thanks to clear rules. Its funny and entertaining at the same time. And that’s good, because experience in these card games is valued the most. Originality and simplicity makes Circus Grandioso win your heart.

Circus Grandioso is a pleasant and simple card game about building pyramid of animals. Who would not visit a circus to see something like that? We would. Especially, when its a card game and you do not have to go anywhere. And that all with a distinct memory effect. You must get rid of all your seven cards by creating rows. Two animals carry another one on their back. But cards can be not only played from hand or drawing deck, but arealso put aside on table with picture down. You have to remember their picture and then in future use them for building. This is moment, when your memory comes in and leaves immediately. Remembering is not as easy as it might look. Match is quick and rules limit you only regarding animals order and duty to build from bottom to the top on both sides. But luck can spoil your fun, at least in some moments. It can even decide the whole match. Otherwise is Circus Grandioso nic game, but very intense on your memory!