by Dušan on 02. 03. 2016
0
previous article
Board Games to Convince your Friends to Play
next article
Review: Robot X - dream of every housewife
Contents 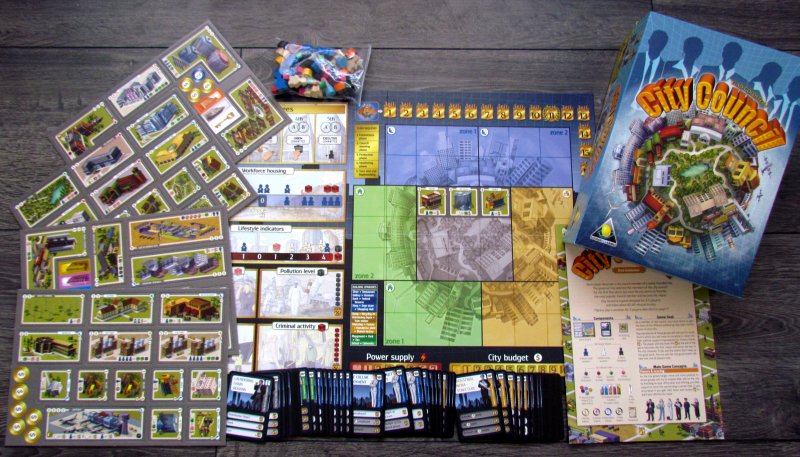 Who would have thought, that nowadays anyone even sees establishment a new city. It seemed, that all are long under construction and expanding, while no new one is needed. But there is still space for one. On a remote African plain, where progress reached only now. Here we are with a vision of a city, that can accommodate heaps of people, who could only dream of urban conditions.

New town could be tentatively built by every player, who opens box called City Council. Its author is Elad Goldsteen and publishing company Golden Egg Games. This game becomes for us the successor of successful adventurous Fallen City of Karez, but scene is quite different today. In addition to the author, there is also signed illustrator Giota Vorgia and everything bears label of year 2013.

Box of City Council does not belong to entirely smallest game. Box is oriented as portrait, showing silhouettes of five mayors, who are in charge of new city construction. It all looks pretty prosperous in the picture, that shines on the cover. But we have to rewind time right back to the beginning, when we also move on to components inside. 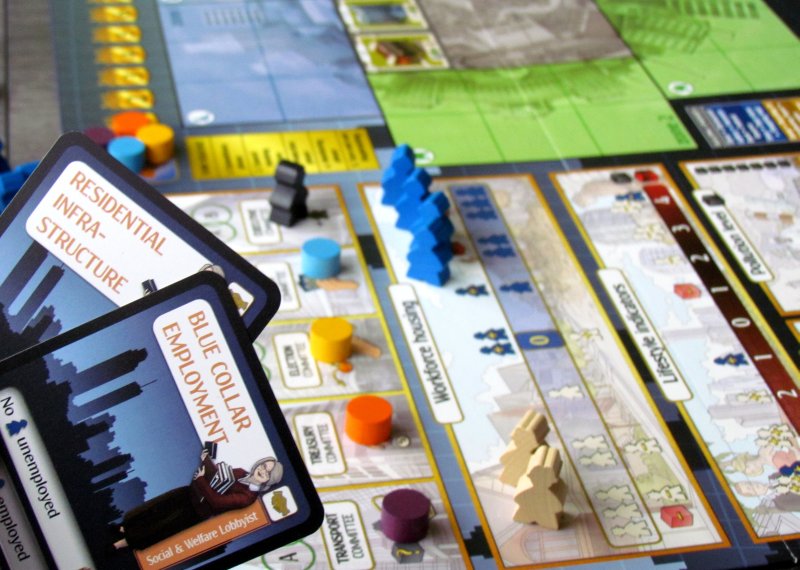 Box is full of merit, that screams city building. This is the main plot of the whole game, which will be revolving on a common game board. In its right part, there are square positions for buildings, grouped into three color zones of those classical SimCity types – residential, industrial and commercial. Now at this point, we find also scales around the city – biggest scoring, but also smaller determining city consumption and its budget. To the right are then warehouse and lifestyle indicators, together with five seats of presidency, which players can occupy and gain an advantage.

Then, of course, there have to be some building tiles (44 pieces), people pawns (divided by color to workers and residents), cubes (crime, goods, community and pollution) and then rounded tokens for players (three each). All these pieces except those tiles are made of wood. This all leaves us with some tokens of various purpose and deck of favors.

At the beginning of the game, players choose a color and each one will receive an identification board, but especially three tokens. One of them is placed at the beginning on point track, while second is kept in players possession. Order has to be selected and marked with this second token.  But only first position is selected at random and player places his token on role of elections couclior in the middle position. He can then deploy other tokens at its discretion. Participants will also receive two favor cards. 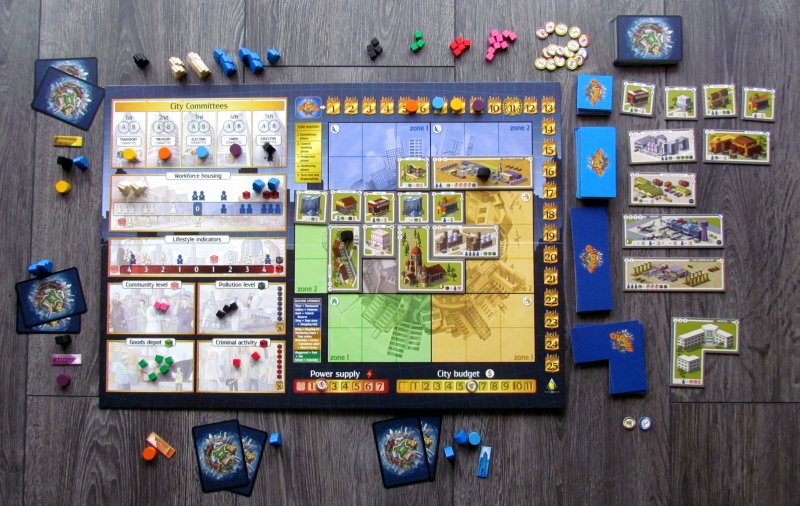 Plan is then filled with workers, residents and starting cube of goods. But the main menu will hide in building tiles. They are divided according to color into basic and advanced, while offer is then created from the simpler one – four from both single and double pieces.

Game can start. And since the beginning of the first turn, all this will revolve around roles, that players can catch for themselves in the council. These positions will spill in the upcoming rounds at the choice of the players. It is this order, which decides player, who will be first to vote on urban planning.

Each player will use his color token to mark his choice, together with some of his finance. They can suggest some of the buildings to be built, but also to intervene with already finished buildings, move them or even destroy. Everyone will then once again vote on these choices and support each other plans (voting for yourself is forbidden) with the help of one delegate received at start. 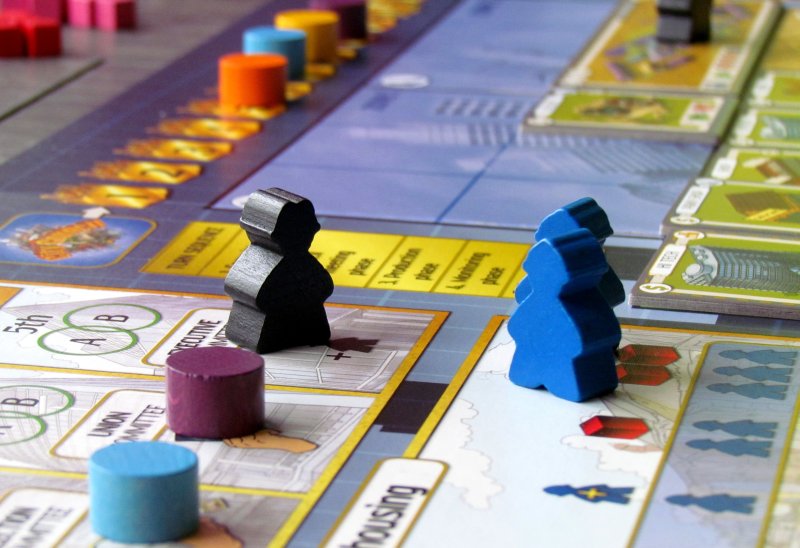 Best plans, which received most votes, will then come to life. All buildings already lying on the surface of the city can then be activated. Each participant has a choice, whether to activate a zone or a building. It is necessary to pay for energy, but that zone will not bring that player anything in return. But in order to use any building from that area, it must be supplied with energy. This ability of buildings will bring rewards printed on the bottom of the card and can thus bring a variety of resources.

Depending on the success of players and balance of city state (state of pollution, crime, but also the community), town may either lure more residents in, or vice versa some workers leave it. Each round is then finished by changing building market and check of favor cards number in each player’s hand.

Now favors, councilors were asked by their friends and followers, are the main element. Players are selflessly trying to fulfill their plans and secretly prepare space for their scoring. At the end of each round, players can report fulfillment of some of their own challenges and get points, all this in three levels on each card with higher and higher difficulty chosen according to player courage. 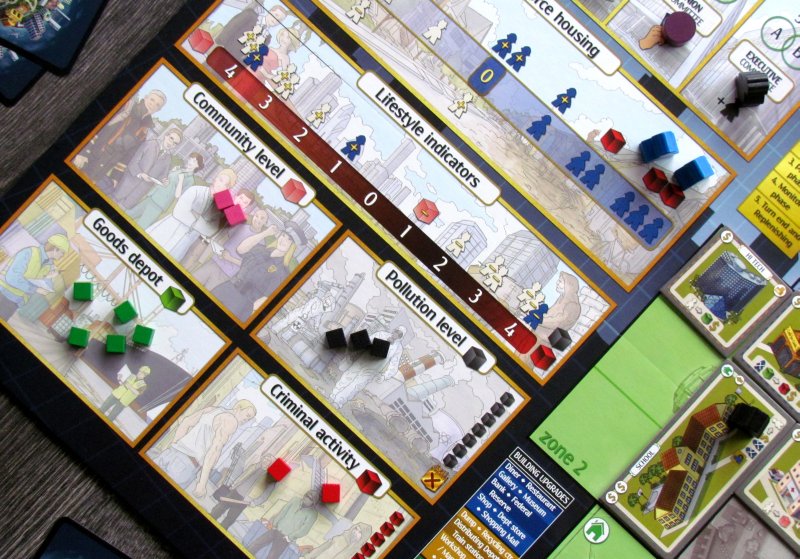 At the end of the round, when someone gains eleventh victory point, is time to conclude the game. Others still have a chance to catch up by fulfillment of their cards, but then it’s really over. The winner is the one, who has accumulated most points in total. But task of players is not so simple, because their efforts may end anytime, if the city is taken over by crime or litter. Then everyone will lose.

City Council is a unique semi-cooperative game, in which players build a city from scratch. They can not play purely for themselves, because they this game will not let them. They have to work with shared resources and only their own tokens for proposals at the beginning of each round. This game is interesting and offers something you probably have not seen anywhere else.

A large part of the gameplay revolves just around management of raw materials and their transformation. This is, what building actions are focused on. There is really large number of different ones out there. Players must build up the economy slowly, but still keep in mind their interests. Cards are secret information and only them alone know their plans. A card may require them to do many things from building certain individual buildings all the way to accumulation of certain amount of raw materials.

Element of partial cooperation is being met perfectly. Players must think of the good of the whole city and negotiate with each other. Just because this, gameplay is excellent in multiple adversaries. The dynamics of the round is interesting, because nobody’s turn lasts long. Instead, each round is divided into a stack of phases and often all together participate in those activities. Match exceed its printed average length of sixty minutes, but not too much, because time will stop around ninety minutes.

Any round begins with an interesting choice of roles. No one can be same functionary for more than two consecutive rounds. And these positions bring some advantage with them, but also affect actual order, in which players will be acting. Everyone has to choose, what he wants to do with the city and should fight for his choice. Only by gaining votes from the other councilors, you may push your plan through to reality. This is an absolutely unique and great idea, that brings great feeling with it.

City Council is surprisingly quite complicated game. When reading the rules, you can easily get lost, mainly due to action phase. Buildings with various options are really interesting, offering different bonuses, as well as negatives for the whole city. And you have to understand all those icons and have overview of them, as well as a succession of all phases. This is mostly because some unorthodox ideas. 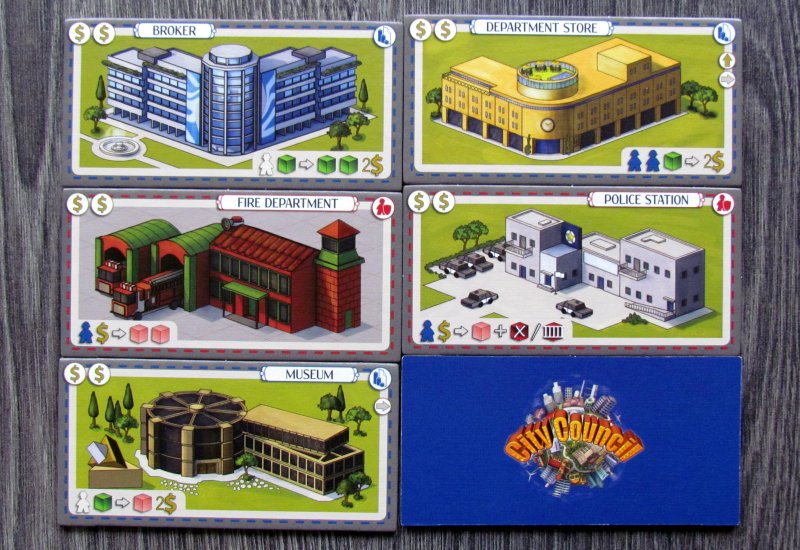 City Council is not flawless. It is a little longer, that it should and there is a lot of manipulation with scales and cubes. But even then, it can get its fans to build city with their ideas and half cooperative concept is pretty fun. City Council deserves your attention, if you love city building, new ideas or games, where players can lose together.

City Council is a game, that offers something truly new. Semi-cooperative city building? Seemingly crazy idea offers battling crime and trash. But players can also use unique tools, such as choice of roles and above all advocating their own plans. Players must vote for plans of others and only those with most votes will succeed. City can begin to grow and produce raw materials. Although the game is longer and has a frequent cube and token movement, it's still fun. City Council is a game, that is sufficiently different to be able to overcome several minor setbacks. It is a shame, that there are any, because otherwise we will have a really great box.