by Dušan on 09. 03. 2020
0
TOP Dětská
previous article
Review: Robin Hood and the Merry Men
next article
Preview: Chronicles of Crime The Millennium Series - chronicles of crime on a journey through time 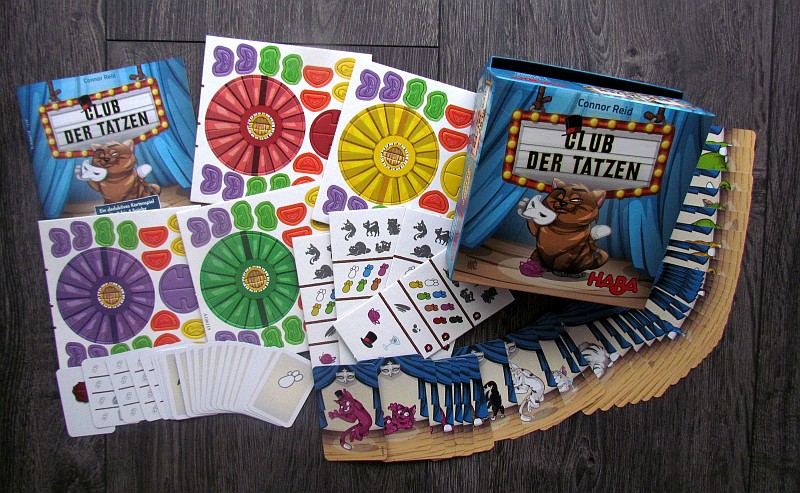 The cat ball started with a short dance, but my eyes are running from one side of the dance floor to the other. I look closely at all the guests, watch every their move and try to recognize one of my friends under the mask. We made a bet together. Whoever first reveals the other’s identity will have as much milk as he wishes for the whole next week.

Deduction will be a good friend for every player who steps onto the dance floor of a small game called Cloaked Cats (Club der Tatzen) created by designer Connor Reid. The game was published by HABA, which prepared everything with the help of illustrations by the author acting under the name HOMBRE.

But the magnificent ball is hidden inside a tiny box with one cat, who revisitously reveals its face from behind a mask. In preparation, players will first need invitation tiles, that are the same (except for one to indicate the starting player). 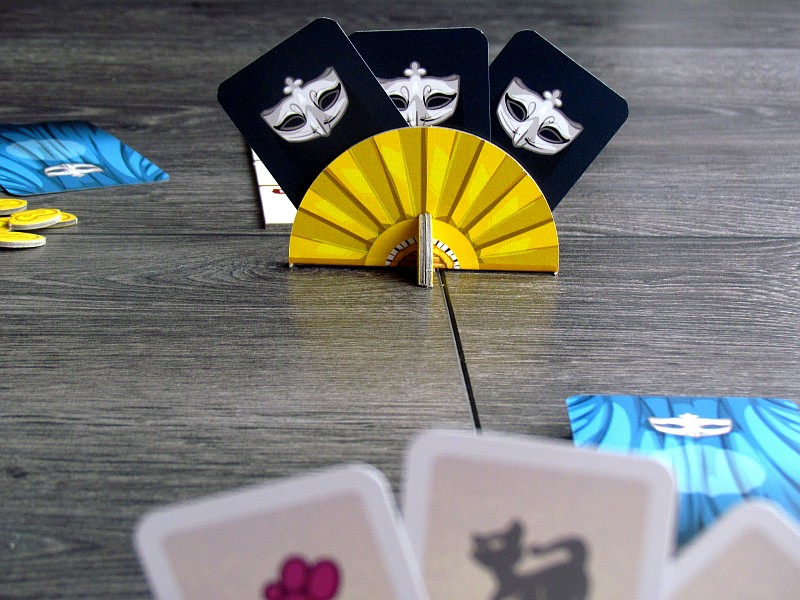 Each participant will get cardboard fan, that will serve as a stand and places three random property cards, that characterize his character in it. He may receive one or more of color, mood, coat and trim categories. The stand also determines the color of the pack of sixteen mask tokens player receives. From the shuffled deck, participants get three cats each. Contrary to the habit, players must leave space in the middle, as it will be used only during the game.

In his turn, the player always plays a card from his hand to the center of the table and this cat decides to enter the dance floor. The newcomer dancer is interesting to all players, because everyone has to compare his qualities with his properties. If currently revealed character has something to do with traits in his fan, he must mark it with his mask token. This shows other players, what clue they should look for. At the end of his turn, player draws one new cat card from the draw deck and passes the word to the next player in sequence. 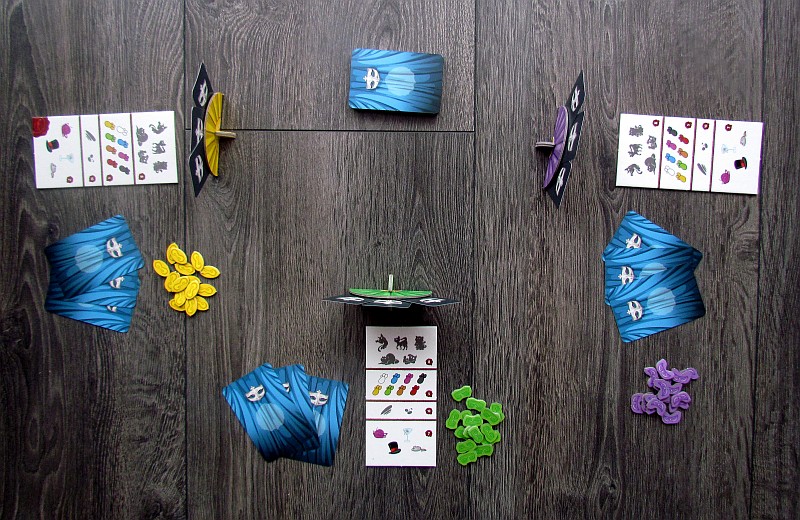 The game continues with more and more dancers. When one of the participants thinks he has enough information, he can try to guess one of the opponents’ traits. The correct tip is rewarded with the opponent’s mask, but a mistake works the other way around – guesser has to pay to the wrongly accused.

As soon as the identity of one of the participants of the game is fully revealed, the last round of the game is made. So everyone still has a chance to guess the hidden elements of others and try to get more tokens. This is followed by a scoring, in which each unguessed card is worth one point, as well as an opponent’s mask token. Whoever has the most points altogether is the winner.

Cloaked Cats are a deduction game for beginners and younger players. Game is quite easy to follow, but mainly everything is nicely clear. All information (except the confidential one) are open and can be used well. You don’t have to guess anything, just keep track of it. 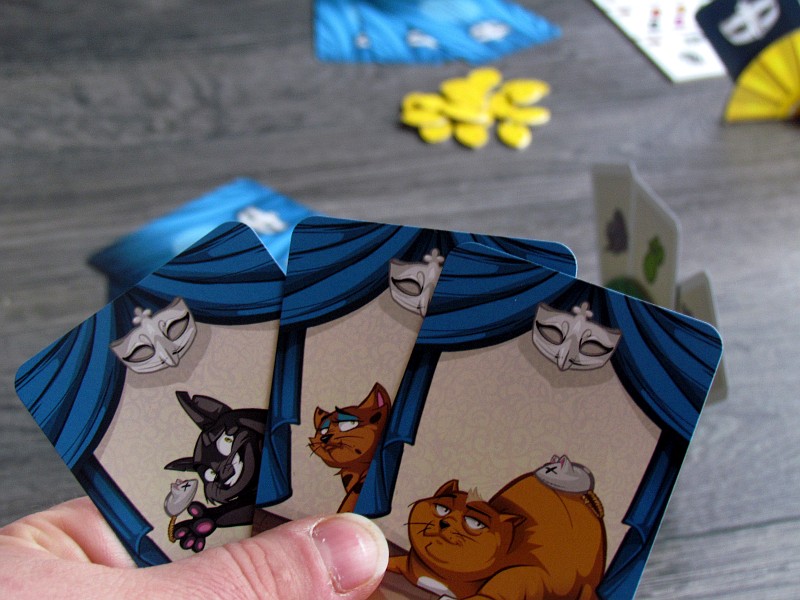 Surprisingly, even this seemingly complicated game can be played by children from the age of seven, if you explain everything correctly. And this is great news. The whole game is very close to them with theme and illustrations, because dancing cats are a grateful subject.

Players here have the freedom to make guess and must carefully time for a while to be faster than the others, but not to be taking too much risk. The player is fined for a mistake, so it really pays to take risks at the end and not in the beginning. 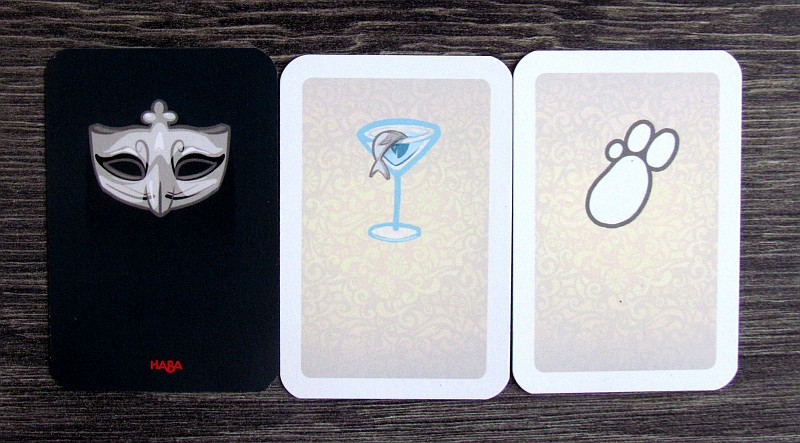 It is because of this risk that the last rounds are exciting as players suddenly lose their shyness and try their luck. In addition to success, they can also score points for others, which can completely reverse the game. And that’s why Cloaked Cats is a pretty unpredictable game. But also fun. There is a comparison, for example, with the recently reviewed Gangster City and the difference in the playability of both games is huge.

The game is interesting mainly with three and four players, although in two you can also try it with success, when playing with children. Only here you will not experience such interesting moments during the match. In two, this is a mere rivalry to guess the other’s characteristics faster. Do not enter the errors of others, which brings free points. The game remains beautifully fast and finishes calmly even in fifteen minutes. 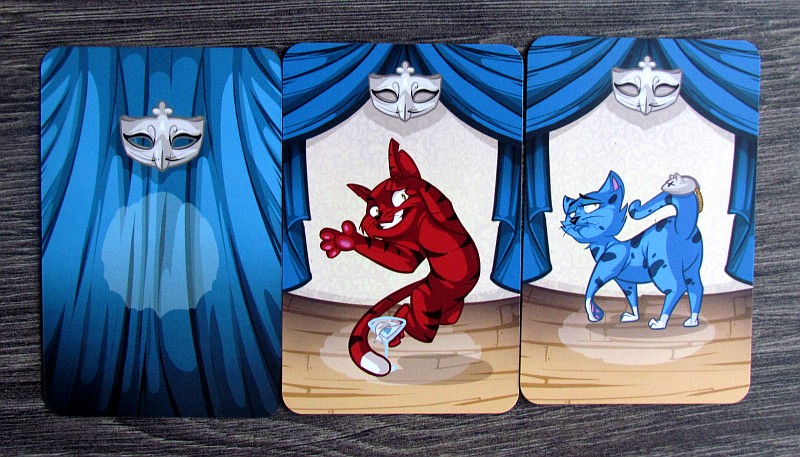 Cloaked Cats is a magical deduction game, that can greatly improve your mood. Simple guessing of cat’s characteristics can entertain and dramatize the whole game. Cloaked Cats is just great fun for kids and families, and you’ll be happy to play it again.