Review: Colossal Cave – there is a lot of treasures underground 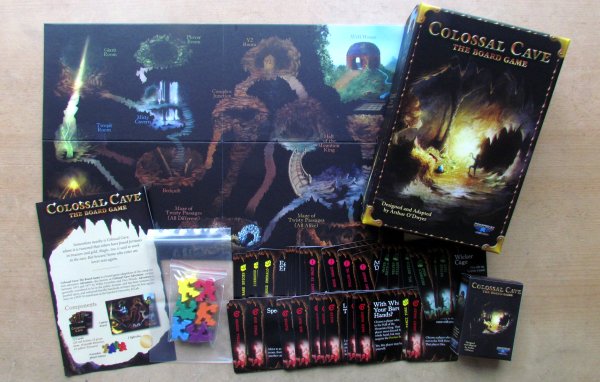 Any return to the surface is harder and harder. For two days we explore maze of tunnels, that runs under a nearby mountain and twists to unimaginable depths. Thin hatches from time to time extend into majestic caves. And this is, where we start to look for treasures – precious stones and gold, which can be hidden there by some mighty ruler.

But with each path, we run into more and more narrow path and we are forced to use pickaxes and hammers to get to certain places. Hollow sounds repeatedly warned us and we know, that there is a risk, that the whole system will collapse. But nobody wants to stop. We all want to fill our own chest. It is our treasure, we discovered it and we won’t let rock to bury it for the next thousand years.

Whenever you venture deeper into the cave, you risk your own life. But somewhere deep down is a giant cave. Colossal Cave. Exactly this is the name of new board game from Game Salute, which was devised and prepared for us players by Arthur O’Dwyer. Thanks to community funding, it peeked into the world in 2013 and we have could test it for you in its final shape. 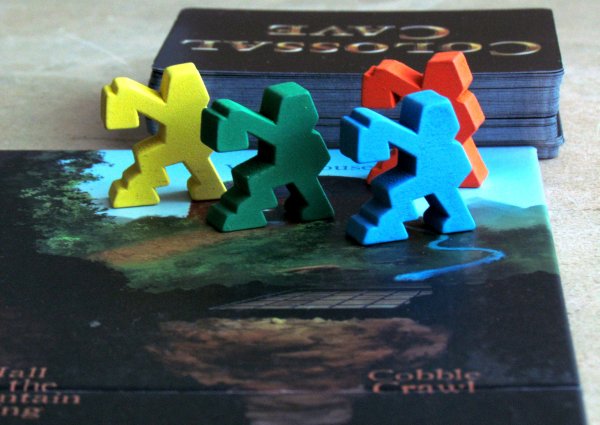 Interestingly, Colossal Cave: The Board Game is actually an adaptation of a text game Adventure, created by Willie Crowther and Don Woods in the eighties. This underground adventure is famous, because it formed the basis for adventure genre, which got even its name from it. All locations in the game are thus faithful to the original. But could they compare to player’s imagination from the original?

The packaging is made into smaller box of hard carton, with fair picture of what you might discover inside. Hidden gold and treasures. Although we could expect it in real form, but instead we could find a hidden treasure in the form of gameplay. Like spelunker, who holds a lantern, looking at the pile of gold and diamonds for the first time.

Inside the box, everything starts with a handbook of rules, where game itself is described in five small pages of text. A little game board is composed of four parts, showing a tunnel system, which ends at the volcano, but can be deafen in the sound of a waterfall. Everything is possible under ground. Below this board, you will find just deck of 72 cards and a bag of explorers. With them lies a light disk within a plastic bag. 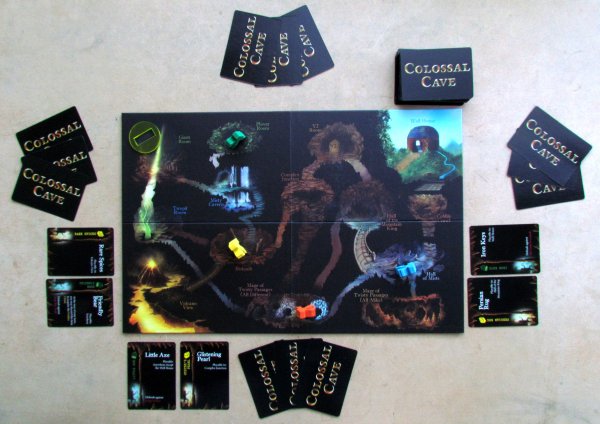 Cards in this game come in four types. There are objects, actions, reactions, and of course the golden and most important treasures. Each of them can be identified by color of the text in the left strip. It simultaneously provides an overview of the cards, even when players are holding it in their hand. The card itself contains then only text describing their effect, so you will not receive any illustrations this time (which is kinda disappointing for a Kickstarter game).

At the beginning of the game, you simply put game board in the middel and each player gets three random cards from shuffled deck. Everyone chooses one pawn in his favorite color and puts it in the upper right corner. There is only place located on the surface, which is also a refuge for the collected treasures. It’s called Well House.

On his turn, each player has a chance to perform four actions in a fixed order. At the very beginning, he will enrich his hand for one new card from the draw pile. Often just on the basis of this acquired card, player can make his choice, where to move in the tunnels. This is the second action available. Heroes can always move to an adjoining room connected by a tunnel, but may also remain in place. 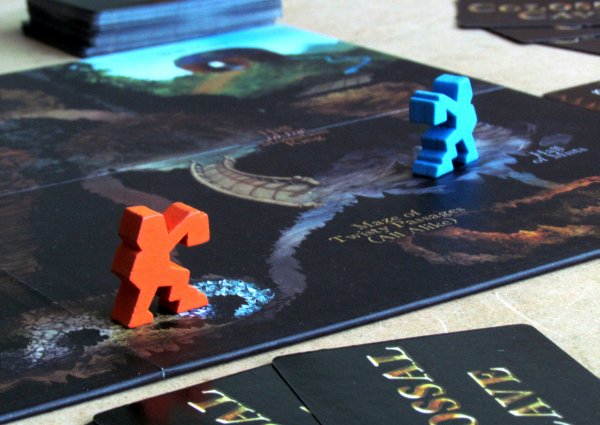 Third part of the turn is actually the last, because in the end, active player must only meet limit of seven cards in his hand and pass action further in playing order. But back to the main part of turn, which can be about playing events or objects. If it does not suit to player, he can replace it by drawing second card, or moving for second time, or even saving his treasure into the chest on the surface. But to do this, of course, he has to be on the Well House location.

A large portion of cards in the deck includes actions and reactions, which players can use to get one-time benefits. They are used also to attack opponents, who can prevent them from happening by playing other cards, whether reactions or objects specifically for this purpose. Reactions are usually linked to some specific action, such as terminating enemy movement (he gets lost), or forcing opponent to discard all items, he is carrying.

Items are always linked to a particular location. Only there can they be found and put into players inventory. From this point, player can enjoy benefits of that card. Playing a certain subject can get him closer to acquiring a treasure card. These valuable golden things are actually just taking up space in players hand from the moment he finds it. This is, why players need from time to time to go back up and put them in the chest, before embarking on further exploration. 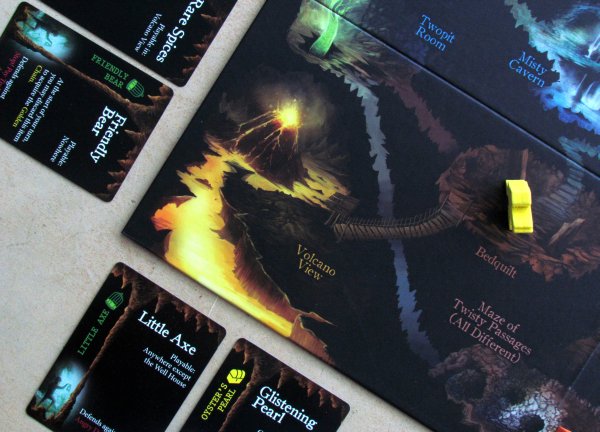 Heroes often die in the game, due to some unexpected events in the underground. At that moment, they lose all the treasures and all cards from their hand. Items they are using (played in front of them) are kept, even when player gets reborn in the mouth of the well. From there, he will resume in the game as normal from the next turn. All this happens until the moment, when any of the participants succeeds to safely carry the third treasure out in the sunlight.

No, the game Colossal Cave does not contain any real strategy. You can believe this. It’s chaotic and crazy fun. And here is the precise place, where players are divided into two camps – those, who hate the game for being so random and those, whom it shall provide pleasant relaxation from challenging strategy games. Now we can help you decide, which one you are.

After playing it, you will surely realize, that the game is very similar to Fluxx (review) from Looney Labs. That was the intention of the creator, who admits it himself at the end of the rulebook. It mainly feels the same in unpredictability and chaos degree. Players affect each other a lot by playing cards with events. 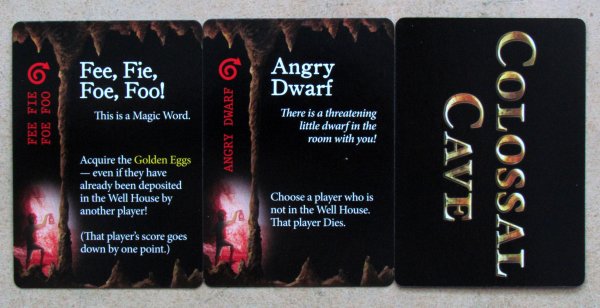 But there is also movement, which pushes it all into a little different light. With this, game has a nice atmosphere. But thanks to a really large share of action cards in the deck, players will constantly hurt each other. It is good for the experience at beginning of the game, but it may cause the game to stretch uncomfortably. It happens before the end of the game, when the players focus on the likely winner and they will try to delay his victory.

In addition, this level of interaction in the game causes the game not being entirely suitable for family play. It arouses great hostility between players, because their heroes can die, lose treasures and return again and again back to the cave to collect treasures, frustrated. And sometimes, its pretty much to chew.

We like chaotic games in essence. And this actually is not that bad as it may seem, even when you look at comments from other players. Aside from the possibility of being able to stretch at the end of the game, then Colossal Cave is relatively fast fun playable in thirty minutes with fewer rivals. More players gets you to the limit of one hour and here it’s getting too long for such light, mindless fun. 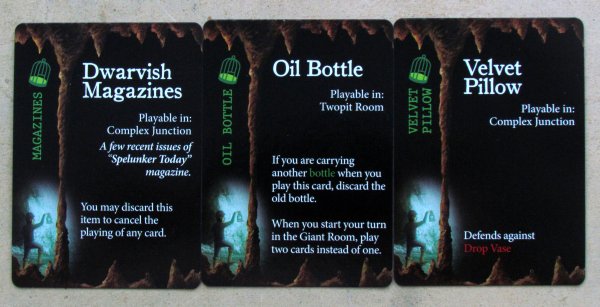 Yet the game has an interesting atmosphere with a touch of adventure tales, because there are also characters like trolls or some spells (Fee, Fie, Foe, Foo) in the gam. Unfortunately cards do not make a significant contribution, because graphics are not present – its a simple text. Its clearly visible, that this game is rather a small and low-cost project. All the more pleasing is, that it actually got published and will find itself an audience.

Colossal Cave is a game, that will entertain especially lovers of uncertainty, chaos and interaction. Such players, who like Fluxx will also feel at home here, because game borrows basic mechanisms from there. Yet it remains sufficiently different. Although it can stretch a little and all its actions are random, it makes fun for the right crowd with its quick and think-free gameplay.

Colossal Cave is a slight twist on a card chaos, which actually is not really even a game. In the game, you do not have much chance to influence, how things turn out. Cards are drawn randomly, sometimes they get you very happy and other times opponents thwart your plans by playing surprising events. Yet it is traveling through the caves, treasure hunts and their lifting, which creates this underground fun. At least for players, who do not need to have control over the game and do not mind, when the game is playing them. There is a lot of chaos involved and many unpredictable situations arise, which is insurmountable obstacle for more experienced players. Already mentioned playing of action cards can also uncomfortably stretch the whole match, because of delaying win of rivals. Colossal Cave remains light entertainment card game for a specific audience.