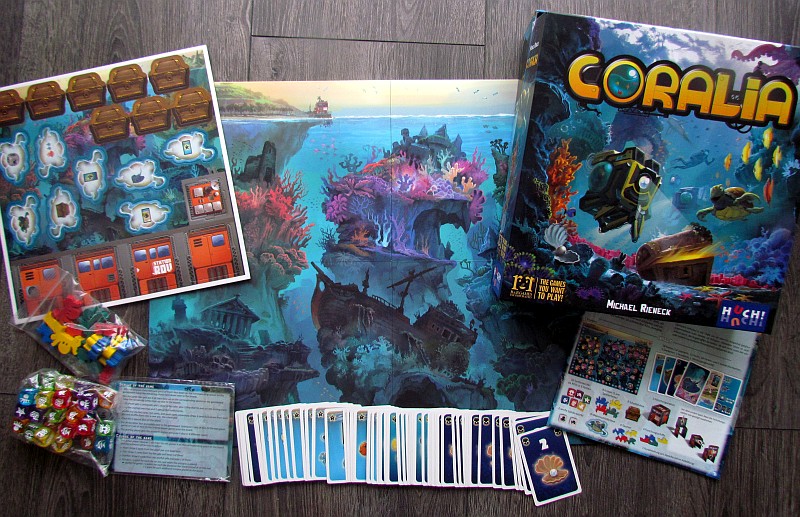 A little danger is worth the experience. I mean, once upon a time, pirate ships were racing here. The throat-cutters knew, why they had chosen this bay as their home, because it abounds in extraordinary beauty under water. And it is the coral reef, that is our goal, although we all secretly hope, that somewhere between those colors, we find some chest hiding, forgotten in time.

Such a coral reef on a pirate island will be revealed to us by the board game Coralia, created by Michael Rieneck under the auspices of Huch company. The popular Miguel Coimbra took care of the whole graphic design. The game was released in 2019 and was included in its distribution network by Esdevium Games.

The box is completely submerged under water, surrounded by colorful fish, and a research submarine shines on the players’ view. Before embarking on discovering and hunting treasures, players must lay out a game board full of colors in the middle of the table and fill it with six chests as well as shuffled turtle tiles as part of the preparation. 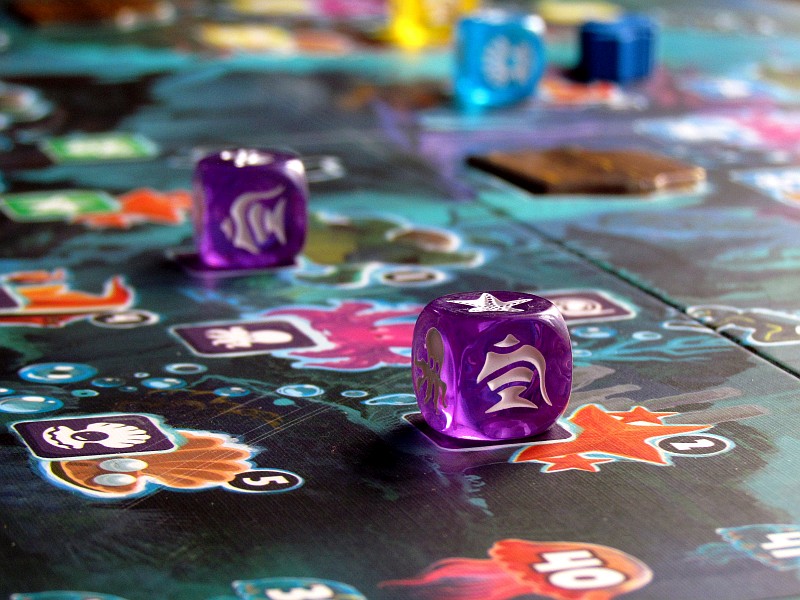 In addition to all this, they will lay out the overview cards, but above all the cards of corals, pearls and fish. These must be prepared by shuffling each one separately, because they take three cards from each and make an island pile out of them. The supply of dice must also be within reach of everyone. Then participants choose a color and gets one diver, one boat and two octopuses in that shade. Player then marks the starting position zero with his ship figure.

The starting player takes a cardboard research station and chooses any four dice from offer. The active underwater explorer must always choose one of these four and use it for action. This is done by placing the die in a suitable place on the plan, depending on its color and icon. This means that, ideally, he has four different options to choose from on each turn, unless the dice are against and roll a symbol, that is already used. 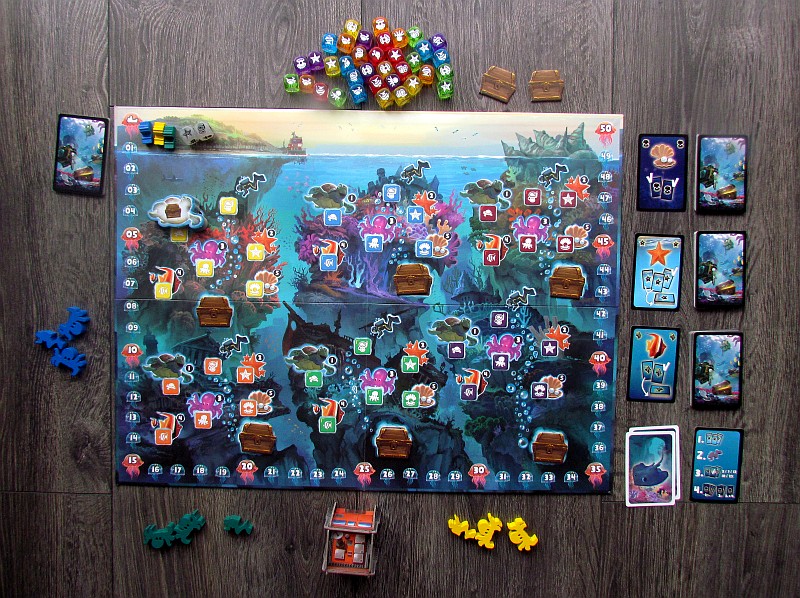 Actions simply mean gaining one of the cards, or exploring part of a coral reef. The player can choose from fish, star or pearl cards and always keep the one he would like the most (and which also fits into his plans). Opponents keep their findings hidden face down.

But the dice have six sides, so that’s not all, because now participants get a chance to use everything on the board in their advantage. Thanks to the correct icon, the player can place his octopus piece together with the dice and immediately get points for each dice, that lies on a given cliff. The turtle icon means, that the explorer has encountered this creature and will immediately score points from the board.

The main element of the whole game, however, is the diver’s figure, who again accompanies the dice to the board. But even later, he can move between the cliffs for a better spectacle, if his owner wants to. He can secure some of the treasure hidden at the bottom of the cliff from which he swam over. This is because according to his location, the player gets points. 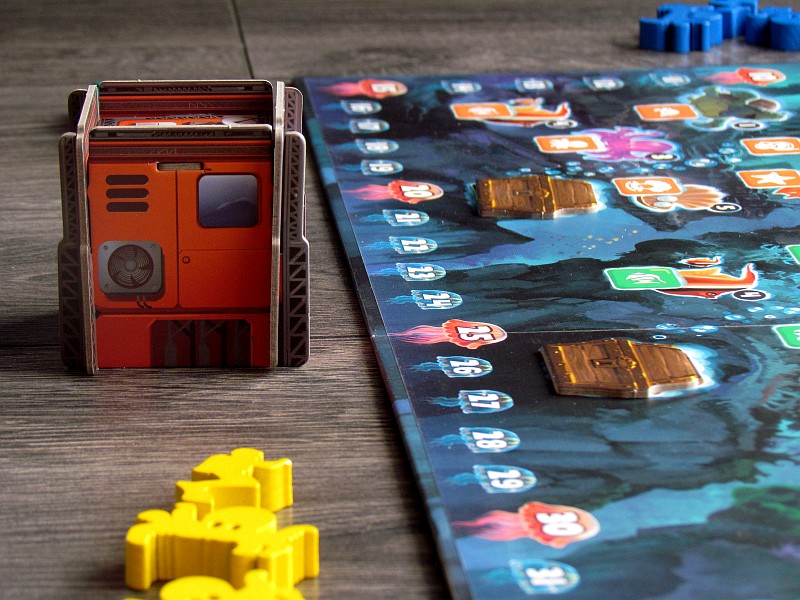 The next player gets a research module with three dice and chooses one other, which he completes with the set and rolls all four again. So round after round, the coral reef declassifies its secret. As the supply of dice approaches, the game ends. Then players get points for their accumulated discovery cards, but also for the location of the diver, a set of fish and pearls. The one who has the most points becomes the winner.

Coralia is a very well themed game, which requires the cooperation of dice, tactics and collecting sets. Players have a choice of four options on each turn, as each dice and icon color combination is on the board present only once. Therefore, it is necessary to carefully consider what the player wants to do. Very often he will not get the opportunity to do it in the next turn anymore.

But while the choices look smart, unfortunately they are usually quite obvious. The player can always choose one of the four dice, that will pay off the most. And that, unfortunately, spoils the overall experience of control over development, because the rest is already taken care of by dice and chance. 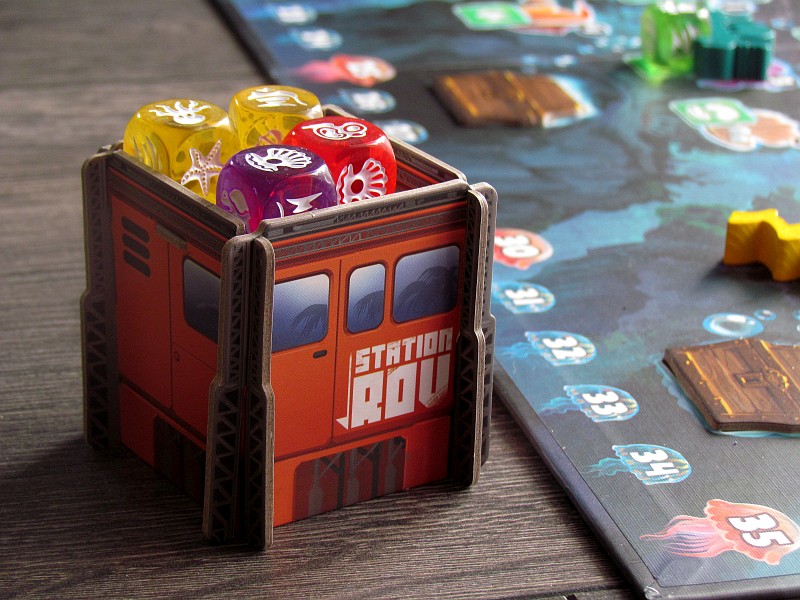 The only really interesting choice remains the choice of dice at the beginning of the turn. In this way, the player tries to influence the probability, that he will succeed, in what he would like to enrich in his collection. But once everything is done and the icons are rolled, then it can be decided very quickly, especially depending on where the game progress is currently located.

The effort to gain the upper hand in the areas of coral reefs also plays an important role in the aforementioned collection of card sets. But even here there is a bit of tension, because the individual areas do not offer enough fields and especially here again the role of happiness comes significantly again. Only with its help can a player complete the fight for points for a location to a successful end. 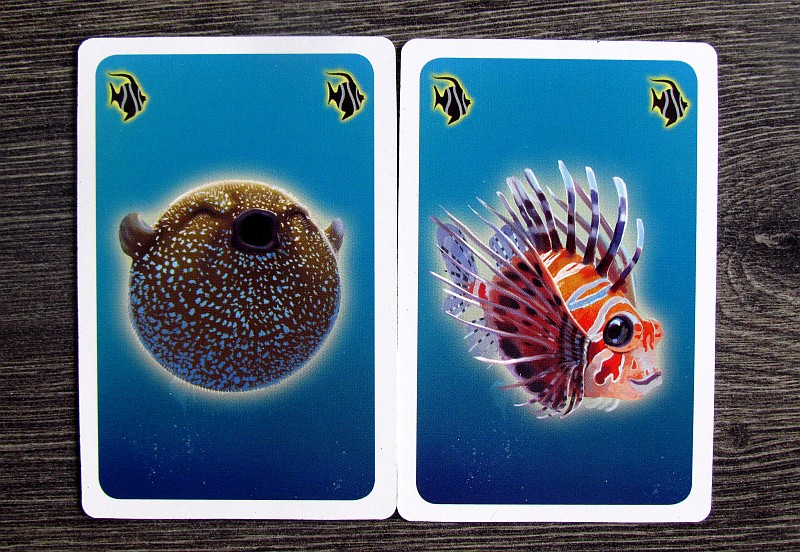 But the game is very fast, which is evident in every turn. The game lasts just for a pleasant thirty minutes, which it can even entertain. Mainly in four, because the speed of moves predetermines it precisely for a higher number of opponents. At the same time, with so many opponents, the dice change faster.

There are a lot of chances in the game to gain victory points. It takes a little bit from each mechanism, so the resulting mix is quite tasty. From the point of view of entertainment, the game is quite pleasant, despite the above-mentioned problems. 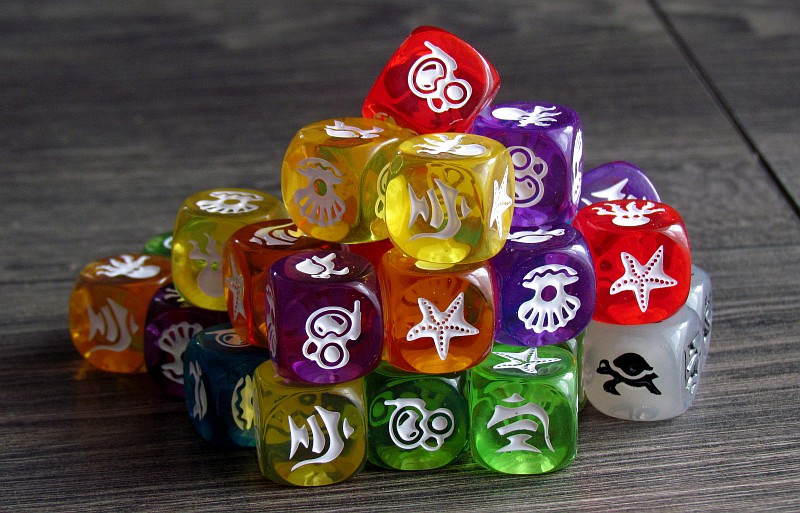 The rules are very simple, although it doesn’t look like from the rulebook at first glance. They seem to be written unnecessarily complicated. The overall impression is saved mainly by the processing, which is absolutely perfect from the cubes all the way to the graphics. The cardboard research station is only here for effect, but it is also doing well to get your attention. A number of wooden figures are then pleasing addition.

Coralia is a game of opposites. Although you will enjoy it, you will also be aware, that it could have been better. But if we take into account that even eight-year-olds can handle it  and count families as the main target group, then the allegations of clear choices and chance can be quickly swept off the table. But if you want to play Coralia in a more demanding team, then you will possibly be disappointed.

- simple rules described complicatedly
- for older it is not entirely fun

Coralia is an interesting point salad, in which you roll dice and based on the results you have to arrange somehow. The game contains a bit of tactics, but above all it's about placing dice on the plan and getting points properly. There are plenty of ways, but players usually always have a pretty clear idea of the best option. Nevertheless, mainly due to the overall speed, the game is fun, if you do not have significant demands on tactical and decision-making options. Coralia is a game, that has a beautiful design and theme, but is mainly suitable as an entry game for the less experienced.