Review: Craftsmen – make a name for your town 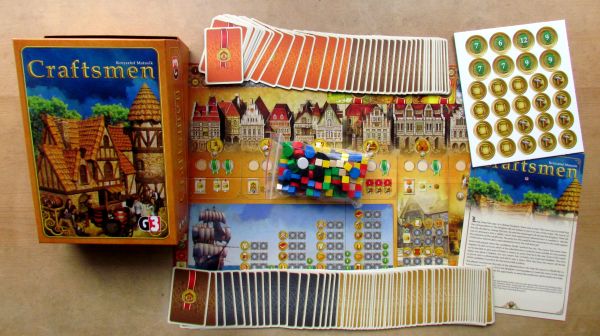 Did they really forgot to put us on the map? It can not be! But I can see with my own eyes, that place where our small town lies is just empty meadow on the paper. We would have never learned it, if this dwarf did not get lost in the woods and emerge in door of my inn. He drank beer and complained, that shops with armor does not want him and he would rather like to build something. I did not hesitate for a moment and brought him to the mayor. Dwarves are known as great builders and who else could make our city famous?

Yet mayor was cautious and invited competition to this lost dwarf. They all have the same task – to meliorate our city. Everybody will vie for the same thing: role of main builder, which will remain in our city in this position even after completion of three years of work.

Somehow like this begins your adventure in Craftsmen from Krzysztof Matusik. Game is published by Polish G3 in association with ST Games. The game itself was manufactured in Germany and finally concludes its traveler triangle in our editorial office in Czech Republic. Craftsmen are novelty for end of year 2013 (along with Raverun – review) and we finally properly tested it and can now introduce you to the game. 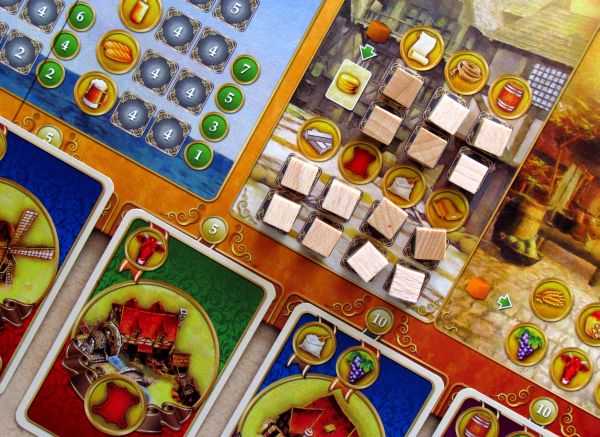 Looking at the name box and dimensions, idea of some connection game comes to mind. This game invites you with a picture of a handicraft house with work underway and is completely different, than you would originally think. You will find this as soon as you open the lid and find detailed and thick rulebook and especially really rich fold-out game board. Its main view shows six guilds, you can visit with your workers. Underneath there is a ship ready for loading and departure, as well as a granary building.

Most important in this game are cards. Before we get to them, we quickly see some round cardboard tokens (labor, privileges and bonuses) and a bag full of wooden tokens. Eight colored discs for each player are serving as workers and you will still encounter twenty cubes and again in six player colors.

Almost half of the entire deck of cards (48) represents banknotes in denominations from one to three gold coins. The remaining seventy cards represents a different buildings, not only six starting lumber mills, but also over two dozen of basic and advanced buildings. Each such house has it building requirements printed in upper part of the card and position for final product of that particular factory. 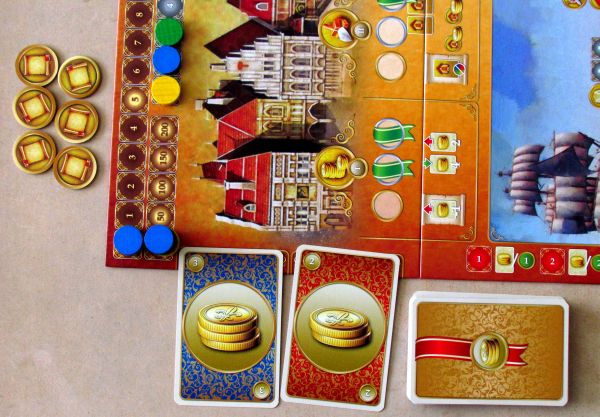 At the beginning of the game, players take all pieces of their color, get lumber mill card to start with and two more random buildings from a shuffled deck of basic structures and five bills. Each of the opponents puts one token on an order scale, while other two will show current points status (one on a scale from zero to fifty, second one is used only, when you skip over maximum).

All types of buildings create decks, with offer made of top two cards from each pile. This menu is placed on the bottom edge of the board. In addition all the remaining piles of cards and chips are made next to the plan. You still need to mark year and period using white pointer. After determining starting order with assistance of an auction, game can freely begin.

For most of the game, players will send their workers to the guild, which will give them different abilities and even benefits. Each location has a number of positions, that can be occupied by their staff. In the event, that first row of places in a guild is full, players may put their tokens on top of those already played, which may even let them get forwards in the execution order. First gold position allows all players, who have their token on it, to use extra special privilege of this site. In the case of playing token into second row, owner must pay fee in cash or points. 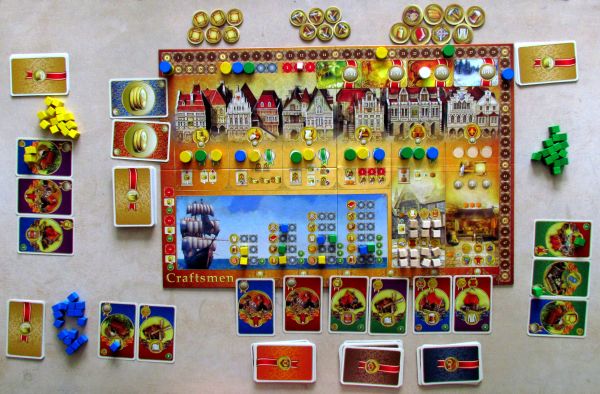 Players rotate in placing their disks. Each has five tokens at his disposal, that can be freely deployed and actions can even be performed several times. After all rivals have played all their tokens or passed, they continue together towards evaluating of their positions on the board, always going from left to right.

Specific guilds allow players to get money, buy semi-finished products, but mainly build buildings from cards in their hands. Completion price is a based on the level of building, but these are just another step towards an outcome, which they seek. Goal will finally get a bit closer, when players visit a guild of craftsmen. With their help, you can convert your cubes of basic raw materials to semi-finished and using even more advanced buildings, tranform them into the final products.

Each commodity has its own production tree, that must be adhered to. Production is always a three-phase process, at the end of which you can enjoy candles, books or beer. The recipes are logical and there is not a problem to get them in a second. Only final product can directly be loaded up to one of the waiting ships. Positions are fixed according to the type of product as well as reward points for their delivery. 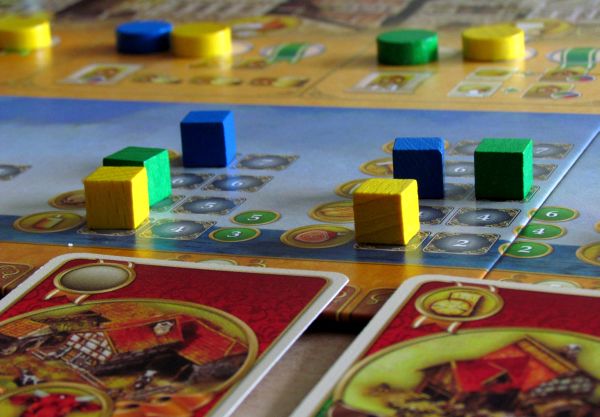 During their turn, players have two more complex options – visit a notary hall, where they choose from several action options. They get to alter player order, gain points or privileges, but also modernization of building.

At the end of each season, weakest player gets privilege token, he may apply when visiting certain sites. Then everything goes on, before players hit the first winter. This season offers a limited selection of actions, when they can just build and produce. All other options are unavailable. But only then boat departs from the harbor and everybody gets points for their loaded products. In addition, growth of the city is judge by mayor according to sets of colored building types in player possession.

After three years have passed, players immediately know, who was best in building and made city famous around the world. Just look at the points and add attributable bonus tokens, that have a single last chance to mix with the order. Player with the highest score is the winner. 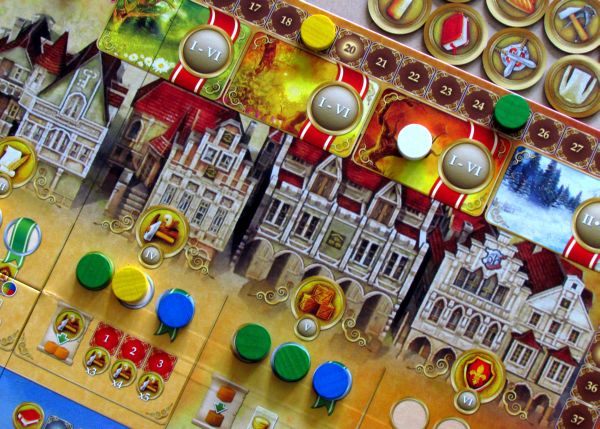 Craftsmen look unassuming, but in fact, they are really a demanding game on worker placement and producing goods. Production process is complicated and its not easy to plan it well, so the game is definitely not suitable for beginners. On the contrary, it will be appreciated by all fans of advanced strategies, thinking, and euro type of games.

Unfortunately, the biggest issue is to learn to play game, because rules contain a wall of text, that is fastened together to form a cohesive whole. Often, when reading, you get lost and on top of that, some information can be found elsewhere, than you would expect. Some questions and answers to troubles, that arise while playing, rulebook does not address at all. Fortunately, while the game is setup, you get the hang of it pretty quickly. But game time still remains at 120 minutes, which is quite minimal for this game, especially in larger number of players. In two you can get to hour and a half.

Complexity of the rules is related to complaints of age recommendations. The box tells us, that ten years old children can play Craftsmen. Given the scope of strategic decisions, this is not very realistic and true, as we consider minimum of twelve years. 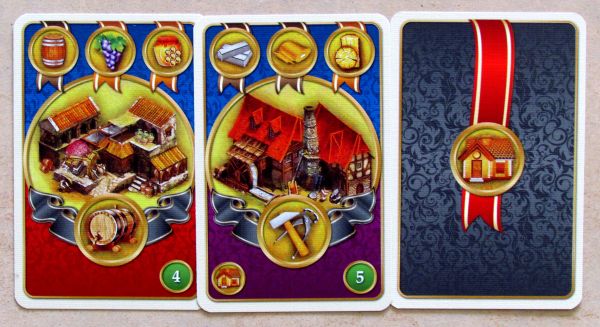 Color of buildings is nicely integrated. You always have to build, so that left half of the new building coincided with previously built one. It pushes your planning with cards in hand, especially when we take into account fact, that colors also determine mayor’s bonus points.

The game is also essential in element of conflict. It’s not just about filling boxes, that in fact exist, because for an extra fee, you can create second row. It often can you even ahead of others, when using actions, so sometimes it pays off to wait. Another level of conflict is hidden in ship loading. Captain can be bribed to loaded your goods on his ship rather, than your opponent.

There is enough building to guarantee sufficient variability. Offer available for purchase is always public, so the only luck is in dealing initial pair of basic buildings. Although this originally creates differences between players, but it is surprisingly a good thing, because it sets players apart in their plans. 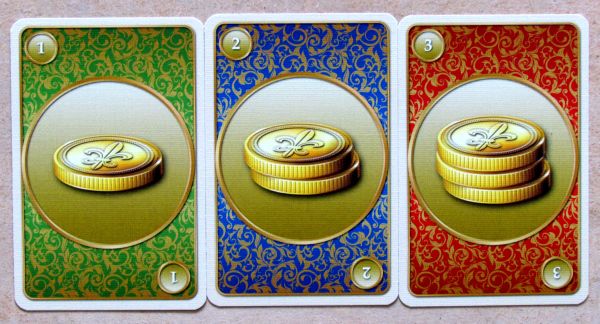 Processing itself is simple and functional. Graphics will not impress you, but you will not be disappointed either. Wooden components are probably also not surprising as they somehow belong to this type of games. Some figures instead of discs in the role of servants would be nice, but in the end, the only significant complaint is directed to already mentioned rulebook. It’s not easy to keep track of all the possible options, that is offered by various guilds and we would certainly appreciate any help-card.

Craftsmen is very interesting and balanced game with nice ideas, which should be appreciated especially by demanding players. You definitely will not be disappoint, as it offers a nice multi-level approach to producing goods. It is this need to think much ahead, that we like on Craftsmen and it makes it suitable for many lovers of euro games.

Craftsmen are a game, where you build factories and they will help you to transform basic raw materials into final products. And with the help of a stock and half-products, which you can make by yourself or buy from merchant. Construction of buildings is not easy, because you have each card must follow colors. You have several actions each round, that are dividing among six locations in the city, but some activities can be repeated and positions are limited. Later played disks can be put into second row, thus changing order of evaluation, so sometimes its worth the wait, if you can't be first. The game is really challenging in thinking, planning and strategy, so it is best suitable for advanced players. They will have even more fun, when revised rulebook is released, because this current does not perform well in the complex task of explaining the game. Despite the shortcomings in the rules, Craftsmen remain a good strategy game, game takes a long time, but you will have a lot of interesting decisions in the course.