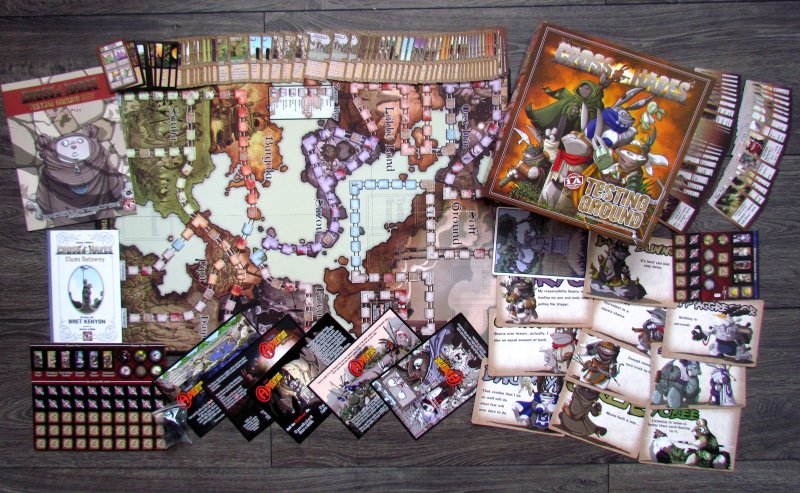 Under cover of night, we are sneaking towards the deadly factory. We left our true self far behind, because an awful industry stamped our land and nobody seemed to care but us. Fortunately, guarding lights are wandering in the dark meadow prescribed in circles and nobody has the slightest suspicion, that something might happen. Yet trio of us fools tries to sneak to the gate of the factory, armed up to our pointy ears and all led by a man. Who would have ever said, that hares may be so bold?

We also get to command our own murderous unit in the board game Cross Hares: Testing Ground, which we arrived to our editor’s office from 1A Games (Tide of Iron). Author Jesse Labbe game has became a reality also thanks to 649 supporters and more than fifty thousands dollars. Despite the solid support, author himself maintained control even over illustrations of the game and whole box saw gloom of shops already in 2014.

On the lid of the box are combative hares stading on guard. We furtively sneak around them and peak into the inside of the package, where we immediately encounter a booklet of rules and a large, folded game board. It is immediately clear, that whole rabbit world is divided into a few countries and peninsulas. They are all connected via paths and rectangular boxes. Colors distinguish area and there are also four starting zones located below. Individual positions may also have some icons printed on them. And when there is some free space on the board, you can be sure, that is will be position for some deck of cards. 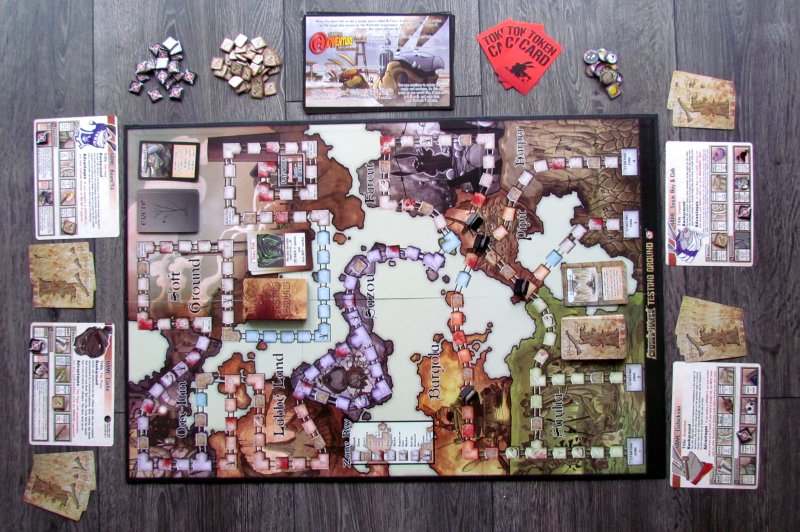 This information spoils the surprise, becase board consisting of six folded parts will not be alone in the war by far. There is also a pile of tiny tokens, that represent specialties. Trinity dice is not something to end our description with, becase there are also cards. First, there are larger ones, which represent ten adventures (one for each region), each entirely different with lots of text and sometimes even their own scales.

This leaves us with second pile of bigger cards, showing characters. We learn the name of the hare, its advantage over other heroes and two linesx of indicators – first line is dedicated to items. And then there are specialties, that allow more options to be done by each character. There is also a package of classic sized cards, that can be divided into events and testing grounds.

At the beginning of the game, players place game board on the table and set trio of card decks on their designated positions. Upper event card is revealed so all heroes know, what is going on. Besides the board will lie all adventure cards and piles of tokens. Then it is finally time for the players to choose their character, get its token with one plastic stand and place the hare on one of the starting zones. 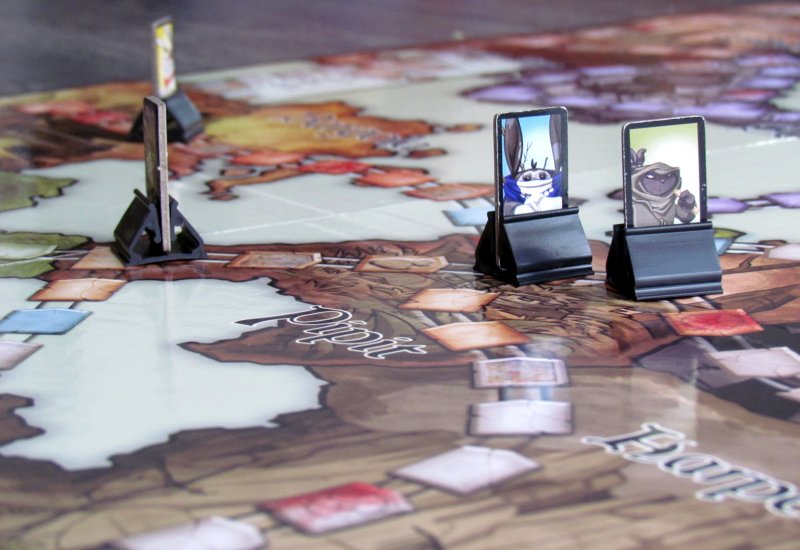 Basis of gameplay is movement, in which have players big help – dice. When the participant gets to his turn, he simply rolls the dice and hopes, that the right side will be on top, when it stops. Most sides of the green dice contains digits meaning movement for hares, but there is also a question mark. With it comes the opportunity to roll second dice – blue research one. This allows players to acquire new equipment or abilities for their character. Collected token can be placed on any space on player’s card and thus make it available. Instead of doing this, player can destroy a token on card of one of their opponents as a malicious action.

Whenever hare moves, a surprise is waiting for him on new space, where his sneaking ends. He can then gain some tokens, but also card or ability to roll the research die. Events are evaluated immediately, while testing grounds can be kept on hand and used anytime in the future. Warriors could also end up on the spot, where opponent hare stands. The attacker (active player, who entered the space) can decide, if he wants to fight and use a red dice. Influence of fight roll can be altered by playing cards, but in the end, it is a loser who has to back out four fields.

Only in the event, that player manages to roll adventure symbol on research (rounded letter A),  he can look forward to a real experience. Depending on the region, in which he is currently located, he takes location card to himself and follow its instructions. Sometimes, player have to choose from several options and often dice must be used to decide outcome of his pilgrimage. 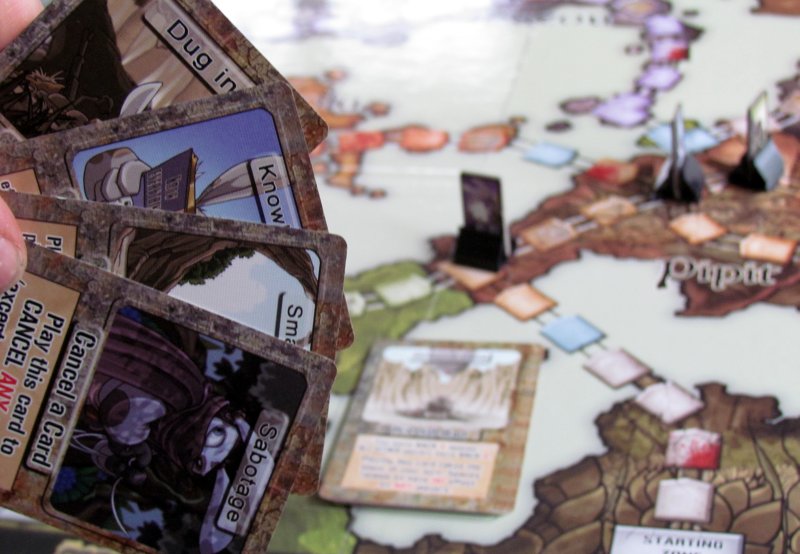 Game ends, when one of the opponents arrives to horrendous factory and destroys it with his attack. Game ending may also be (as a variant) decided by rolling the dice and passing challenge based on the result of pips. Six endings are possible. Either way, first player, who meets victory conditions (destroying factory or defeating opponents) is the winner.

Cross Hares: Testing Ground is a game, that will not be evaluated easily. If we took an ordinary meter for it, the classic we use, it probably would have been decided easily. The game is random, with practically no chance to influence anything.

But as we know, even such games can be fun. And when you see the sparkle and joy in eyes of young schoolchildren, who embark on a new mission in heroic roles as rabbits, we have to believe. Finally, you will agree, that entertainment can not be devised by any formula, but it just has to work by itself. And person, who knows how to listen, and be a little child for a while, will be pleased very much here. 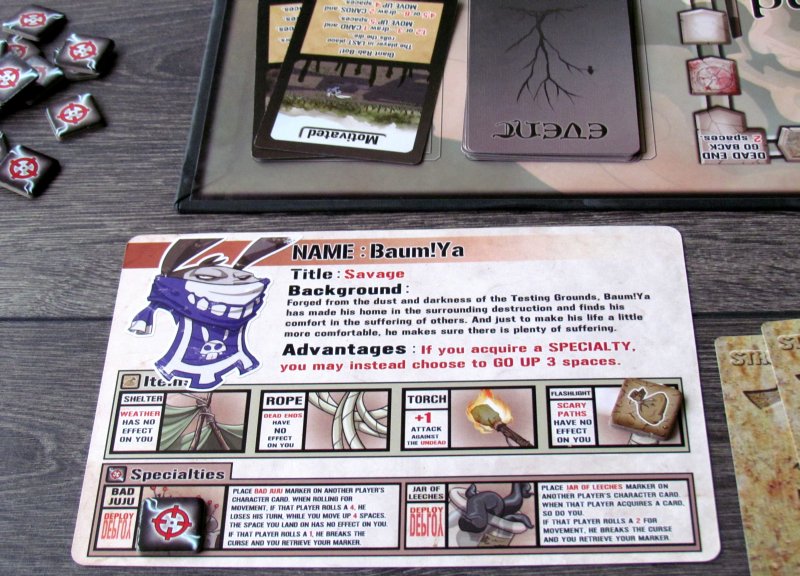 Of course, there will be plenty players, who will not share this feeling. They will never understand, why some people are so fond about Cross Hares. Well, then consider your group, before investing your money in this shiny box. If we had to compare it to some other experience, then our minds is definitely set on Talisman. These two games are surprisingly very similar.

Everything is a matter of luck. Movement of pieces towards the goal is from time to time disrupted by a event on a space, as if you were playing the very simplest dice game for small children. But then, there are heroes, skills, goals and everything mixed together to intrigue even older players. Although coincidence will not leave you until the end of the game, there are at least some things, players can be masters themselves. We are talking about cards, that can be selected and play in specific moments to influence outcomes. 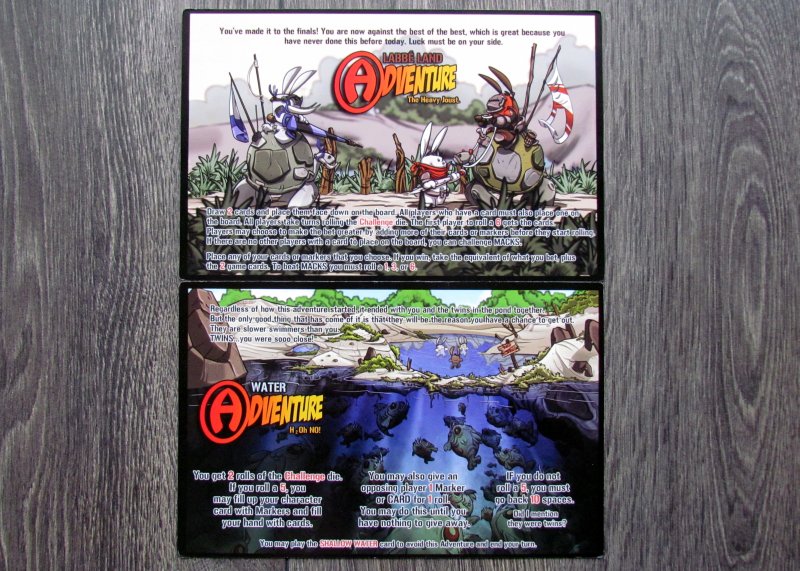 Players are not playing together, but every man for himself. So whenever they meet on the trail (after setting out each of their special starting corridor), they will attack each other. And it is this subtle harming each other, why Cross Hares are better in a larger number of players. Minimum number is two, which makes it really a playing catch-up. But with kids, there is not problem in playing this way either. Game then lasts sixty minutes (significantly less with two), which can be the other mitigating circumstance, given overall simplicity of the game. But an hour is quite alright.

Another crucial issue for the overall impression is graphic and indeed the entire processing of the game. And yes! Pictures are absolutely magical. Players are given even a booklet with a story called Gateway Clean and well-made tokens and cards. 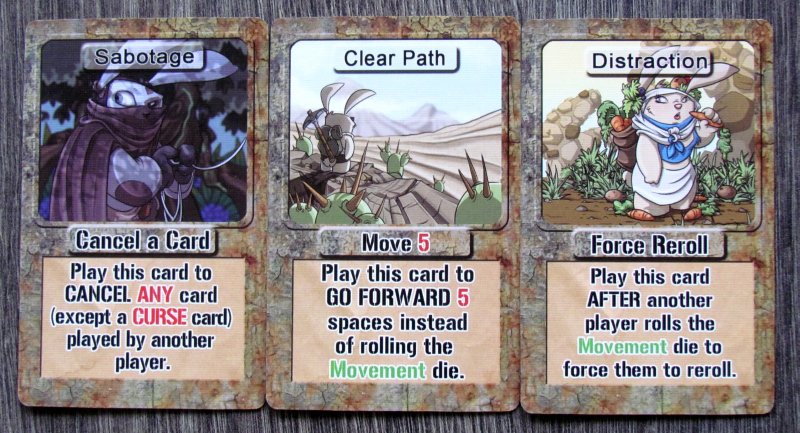 One of our testers called this game The ultimate guilty pleasure. And maybe you will be a little ashamed to become a fan as well. But in the case of Cross Hares: Testing Ground, there is definitely not any place for shame. It is a new appetizer for those, who are not afraid to admit, that they were unlucky and enjoy playing with others and some illusion of decisions. Are you one of them?

- driven purely by luck
- not for everyone

Cross Hares: Testing Ground is a game, that will be most appreciated by fans of dice and chance. The game is exciting and dramatic, but at a price, that everything is controlled by luck. But even like this, it can be surprisingly fun game, if you have the appropriate taste. But most of all, combat hares would be ideal for smaller children and families, because rules are very simple and most of the time, it is merely roll and move. It will not thrill every gamer, but if you like light entertainment and exciting stories, then Hares Cross: Testing Ground may surprise you, just like it did to us.