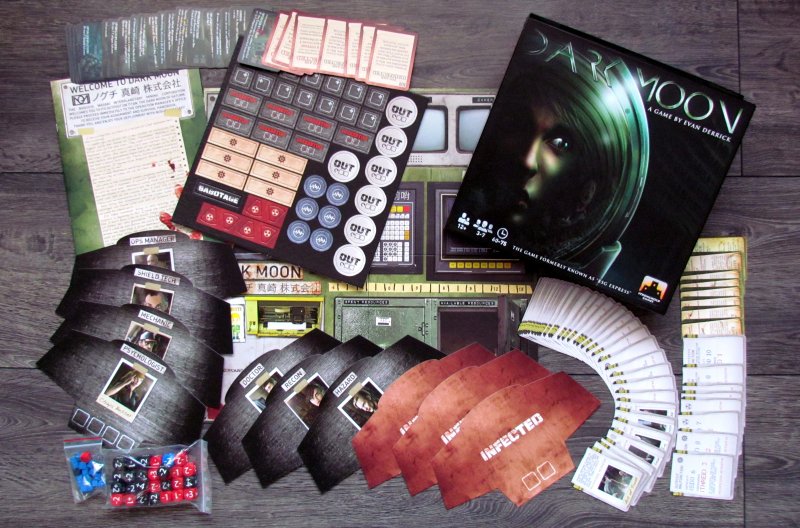 Moon will always be a moon, you might say. Each of them is hanging in the sky, when you tilt your head back. It simply depends, which planet you are currently on and how was it named by those foolish pundits from Earth. They hang in the sky and most of are shining on those, who stands down there underneath. But from time to time, all moons vanish away for a moment, as they had never been there. What happens with them in these moments?

Finally, a horror sci-fi game called Dark Moon arrives on the scene. Its author is Evan Derrick. But Saturn’s moon has not always been true home to this game as it was part of Twelve colonies. Yes, this game was previously called BSG Express and was destined to be printed in print-and-play format. If your are unfamiliar with that three-letter acronym, we’ll tell you, that it points to a series Battlestar Galactica. But all our favorite characters have been replaced by others and a whole new game was made – by Stronghold Games. In 2015, this new creation was unveiled at the fair Spiel in Essen.

This one game is a bit of a chameleon from the first moment you meet it. Although the box looks like a purebred square, it is actually slightly rectangular shape and lid fits only in one rotation. On the cover, we find an astronaut helmet, which reminds us of horror movies from Ridley Scott, whether its Alien or newer Prometheus. Inside the box, players will find a game board representing control panel of a station. There are indicator signs, quad screens and cameras, as well as spaces for cards and resources. Board contains various control elements and looks like a true one, even with some Chinese characters to believe, that NASA is cooperating with CNSA. 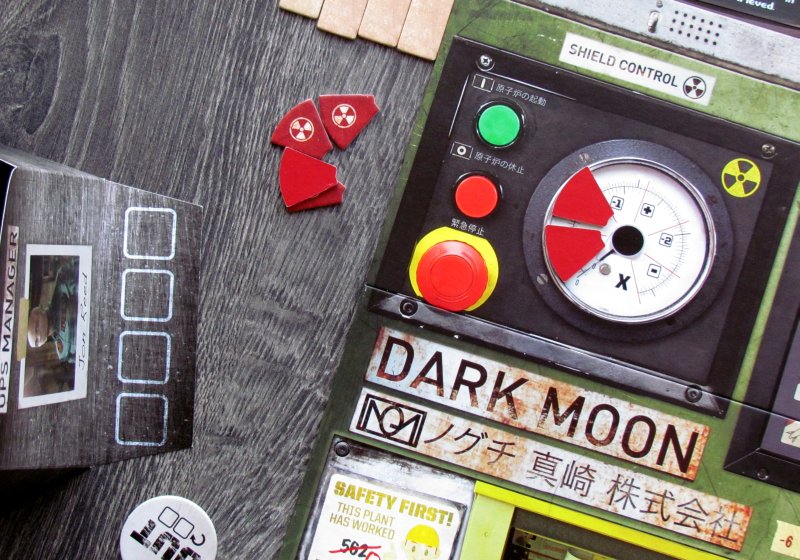 In addition, there are also player screens for each player. There is a surprising total of ten of them in the box, seven have black background and are designated for uninfected players. There are also three red screens, indicating crew members, who can no longer be helped. Both screens are wearing squares denoting number of dice and a portrait with character’s name. Every character also will be equipped with one description card of his special skills.

But there is a lot more cards, and most of them are full of text and instructions. There are events to cope with before it is too late, cards of failures, challenges and complications. And then there are eight major status card, which will decide hidden identity of players. To list of components belong also inseparably three colored dice (black strengths, weaknesses and red cube commanding officer). Each type has a different layout of digits with positive values. There are always three negative twos. Category of cardboard components includes tokens of shields, fatigue, engagement, sabotage or quarantine.

Now it is up to players to create compact game from these seemingly disparate pieces. First, players must split their roles. Randomly, each receives one status card, which can under no circumstances be seen by anybody else. Everyone takes one screen (so far only those uninfected, red ones will be used only during the match) according to character for which he wants to play. Player gets four dice as his equipment (two black and two red), skill card and involvement token. 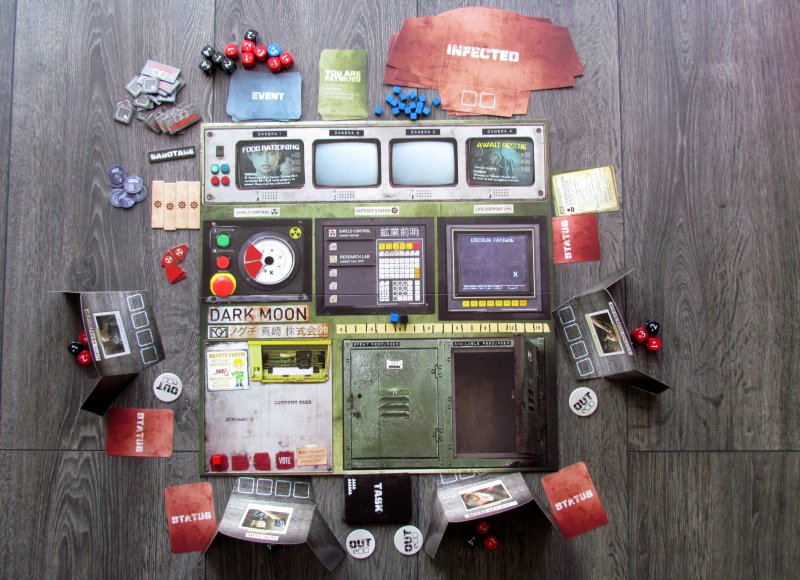 Then things begin to happen on station board in the midst. Shield status area gets two slices (of six, that can fit here). Center console is marked (with randomly drawn tokens) with two sections, that are facing some problems. Initial position of a cube on suspicion scale is placed along with black cube on a scale of difficulty. It only remains to prepare decks of tasks (depending on number of players) and events. The commander lays out two random cards into slots event for cameras and discards one.

On his turn, player will use dice hidden behind his screen. He rolls with them out of sight of other players and then, at his own discretion, applies positive or negative numbers. None of the opponents knows, which values he had to choose from. Positive number usually means success, failure is negative. Player can use them to fix some of station location, cope with some events (and get closer to victory for group of uninfected) or issue an order to another player. Most important action is the possibility of a vote about placing some player in quarantine, based on suspicion, that he is infected. Conversely, players can also vote on releasing already captive comrade. Each player picks up one dice and uses it for voting (no rolling needed). Result is then governed by voice of majority.

Second part of each player’s turn revolves around tasks, that they stand in the way of all. Active player draws two cards, but reveals only one based on his choice. It can be a complication (with text describing the task) or malfunction, that has its own difficulty of fixing, consequences for players and may also order them to move cube on suspicion scale forward. Players can volunteer, if they want to participate on the task, roll the dice and use them. Each value rolled moves players forward or, conversely, away from meeting currently drawn task card. If unsuccessful, player will meet unpleasant consequences, such as the blocking of specific actions, lowering shields or reducing number of cubes. 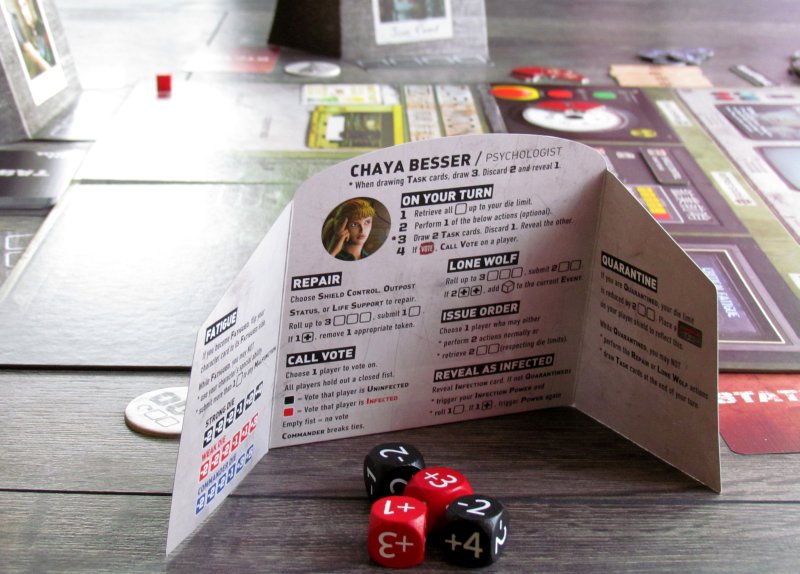 A player, who is under quarantine (whether justifiably or not), has a smaller number of dice. At any time during the game, players have option to reveal as infected. That exposes not only possibility of a one-off activity as he comes out of the shadows, but also a completely new set of actions for upcoming turns. From now on, he may prepare task card deck for players, sabotage equipment or demoralize the station crew. Even infected player uses his dice and their values do not always let him do everything.

Game may end up with victory one of the two parties. Healthy people can celebrate their success, if they manage to survive and complete all three events and final one, which is uncovered from the very beginning. Infected players prevail, if they get rid of their counterparts by either breaking shields or destroying life support systems. Each party celebrates victory as a team.

Dark Moon is really a revised and simplified version of the famous game Battlestar Galactica. And there is absolutely everything, we would like to see in treacherously tuned, waiting  for us. Voltage goes up above the roof and players are constantly involved in the match. No matter if you are on turn or not, you must carefully monitor turns of your opponents in an attempt to evaluate their intentions. 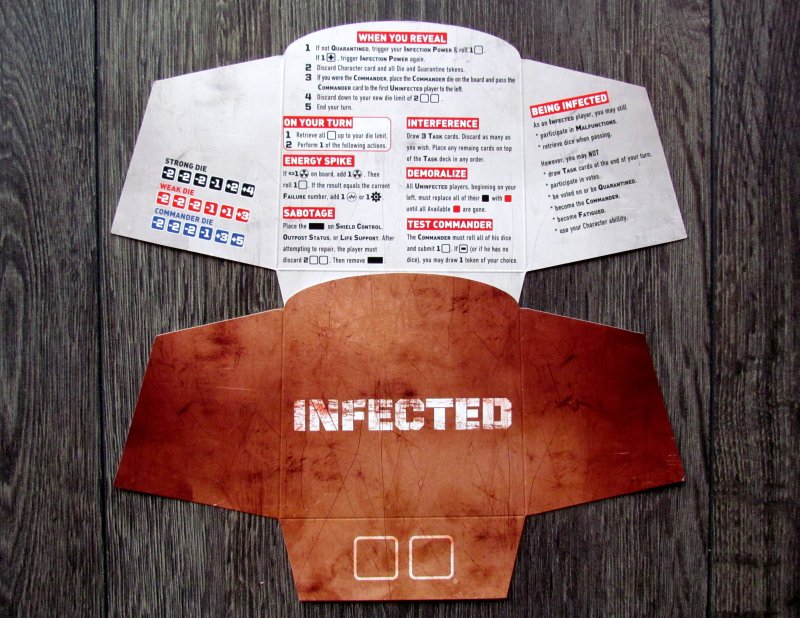 Everything fits together beautifully. Infected player has lots of opportunities to do harm already, when he is hidden. But he must estimate right moment to reveal, because other actions become available. Otherwise, he can also spend big part of the game in quarantine, where he will lose most of his inhuman beneficials.

Overall atmosphere is benefiting from nature of this game. This is really dense from the beginning to the end. Every step and every move is actually a struggle for survival. If you have good imagination, then you you will see yourself in a hopeless situation at the station 1284000000 kilometers far from Earth. No chance to help, because any call home will fly 71 minutes (and the same amount back) even in the highest possible speed of light. You are alone, surrounded by people, who no longer may be beings, that started this voyage with you a few years ago. Do you feel the crunch?

But while the original game can span across several hours, here it is all compressed in a compact packaging, playable in an hour. This is really excellent fit, when we thinkg about the ancestoral name of the game (BSG Express). 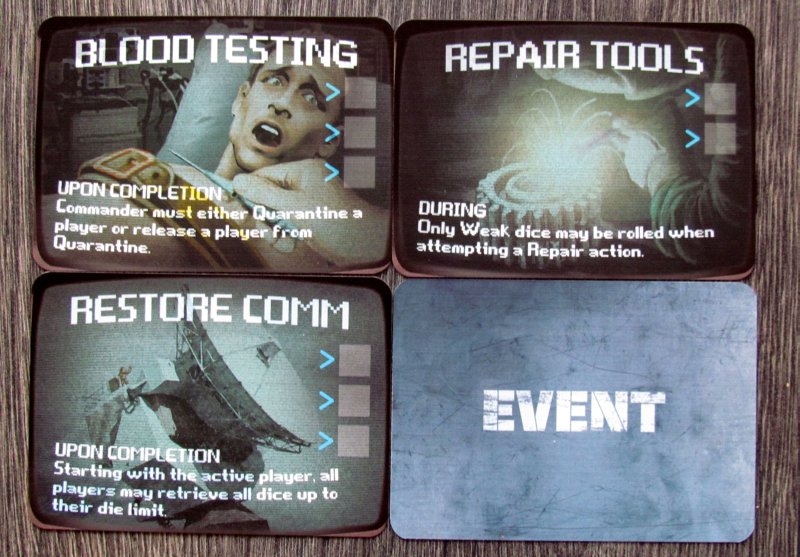 Game has a surprisingly simple rules. They are indeed described on more pages, but using large font and in particular, nicely described examples occupy a lot of this space. Everything is clear at first few sights, which ensures, that the game can also be played by less experienced audience. Majority of recruits such will be thrilled from such an experience.

Dark Moon is a fantastic thing. Increasing both players also increases number of traitors, who are among their ranks. From an initial ratio of two to one in favor of healthy individuals up to the biggest battle of four humans against three infected. You experience tension also in the lowest number numbers, and still even seven players does not give you some waiting times or causes excessive time requirements to complete it.

Mechanics with cheating through dice is a great idea. Players can really lie without any problems. The entire game, of course, relies heavily on fair play and that players do not cheat. If you know about someone, who would be tempted to secretly change values on his dice, we recommend not to invite him to the table at all. He does not deserve this game. And yes, there is a big portion of luck involved, but who cares? 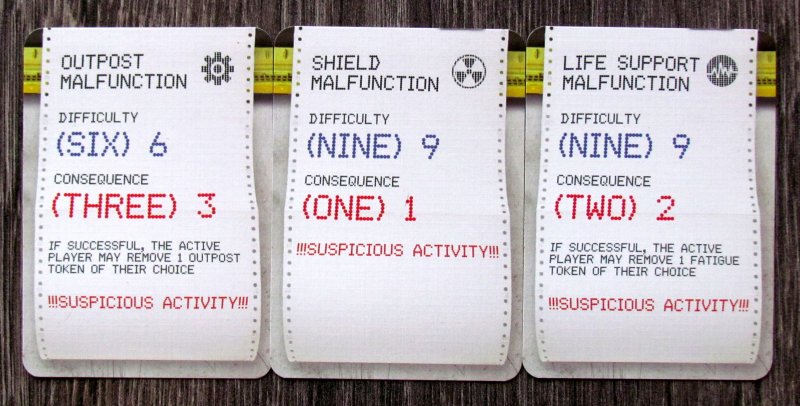 Dark Moon is an astonishing example, how to beautifully design a game. Points can be subtracted perhaps only for originality, because it borrows many of its elements from his big, now (there is a sentence on the box) practically untold brother.Overall, however, it offers an experience, that you will enjoy. If you like games with traitors, then this news is an obligation for you. And even if you will be looking for Gaius Baltar in vain, new setting fits the game very well and recalls some horror experience.

- originality
- oh yes, its about luck

Dark Moon brings us to the station, where strange bacteria is raging. Players are divided into healthy and infected from the beginning. And those not healthy have only one purpose. To wipe out the human race. Well, at least the portion that stands on Titan, Saturn's moon. The game offers a condensed tension and proper injection of adrenaline directly into your vein. You never know, who is a traitor and a mechanism of dice cheating helps them to remain hidden very well. But the game also offers a lot of interesting choices, teamwork and all this in space on one hour. Its lucky and based on other game, but who cares? Dark Moon is here to taint us all with paranoia .

by Dušan on 23. 10. 2017
Each city can bring with it not only a lot of new possibilities but also a number of dangers. In its shadow, there are hiding many new and dangerous creatures!

by Dušan on 29. 10. 2016
Crazy alternating images may only have a few reasons. Either someone is trying to make a movie, which or he is looking for one particular monster in a pile [...]

Review: Rush & Bash – Bang, Boom and Pedal to the metal

by Dušan on 23. 05. 2016
Scientists are good people, who are helping everyone and do everything they can to make everyone better. Well everyone, but their test subjects. When it [...]

Review: Guess What! – three of the nine

by Dušan on 25. 04. 2016
It always is ultimately a battle between two brains. Between two people. The one, who created the puzzle, and the other, who is trying to solve it. May, [...]
Comments
Leave a reply