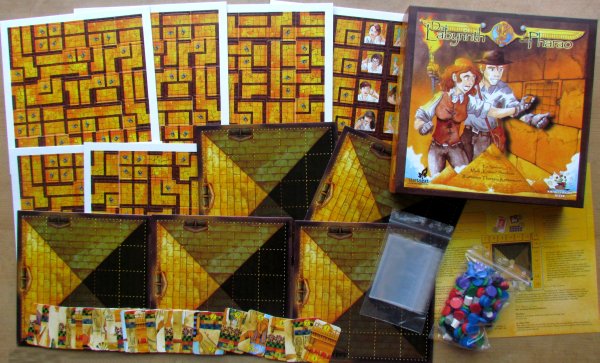 Although he is not alive, I can feel touch of his breath on my skin. I only got up to the sarcophagus. One of my companion was swallowed y a bottomless pit, from which there is no escape. But I regret mostly a suffocating death of my longtime friend, who foolishly and enthusiastically entered the central room. Inside were poisonous gases and fumes hidden for centuries. I had to wait for several days, until it was safe to enter here and now, finally, I can reach all Pharaoh’s treasures.

We fortunately are not forced to overcome pitfalls and dangers, because we experience everything in the comfort of our own home. It is allowed to us by board game Das Labyrinth des Pharao from the author Krimsu Sienholz. His publishing house Krimsus Krimskramskiste from Munich has also done board game Im Wald da sind die Räuber (review). This game came through StartNext server (similar to Kickstarter) in 2013.

The game is located in the square and little flat box. We see as a hero of the story on the lid, as well as the mythical labyrinth of corridors. Only one of the scouts can succeed, but we all embark together on this perilous journey. Just open the lid of the box and see, what is waiting for us inside. 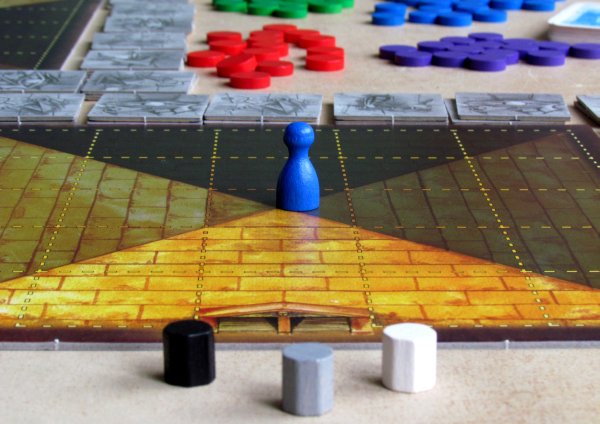 First in line is the game board with five pyramids. Each player gets one just for himself and others will not be poking around, during his survey. The biggest pile is made up of a total of 140 square tiles, representing inside walls of the pyramid and therefore creating the maze. These tile scan be divided into five sets of 28 tokens, which are again divided among the players.

There are also wooden pieces of treasure hunters, columns representing depth of your exploration and seventy-five colored chips of treasures. Twenty-eight cards are numbered the same way as tunnel tiles: from one to nineteen. The list is ended by rectangular bidding tokens.

Players can take most of the components for themselves. They get a pyramid, a colored piece showing treasure hunter, but also a set of three corridor tokens (columns) and twelve treasures in red, blue and green. Each of the opponents also takes a set of 28 pieces of corridors and carefully sorts them according to values, so they go around the pyramid board. The first three of them are revealed and those, which are doubled (between six and fourteen) are placed with same numbers of top of each other. 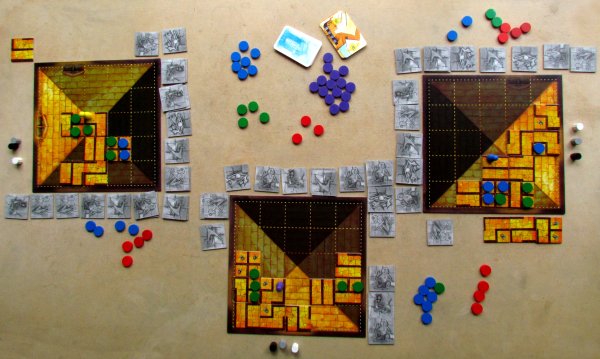 Players together shuffled deck of cards and places it within reach of all. On the same site, you will also leave set of purple special treasures. The whole game has to be replenished by a pencil and paper necessary to record the victory points. This match is now ready and we can enter the cold and dark interior of the pyramid for the first time. Don’t worry, we’re here with you.

During the game, explorers are not only going through the corridors, but players will build them by themselves! At the beginning of each turn, one player reveals top card from the corridor deck. It determines, which tile can be placed by all players on their pyramid game board. Players carry out action all at the same time. Position and rotation is completely arbitrary, but it must match grid drawn on the pyramid.

If player has placed a piece with a scarab picture on some of its four parts, he now has opportunity to put a treasure token from his inventory on discovered site. However, this only makes sense sometimes, as we will tell you a little later. In addition, treasure tokens can be taken only gradually from the lowest values of blue, while red for three points can be placed last. 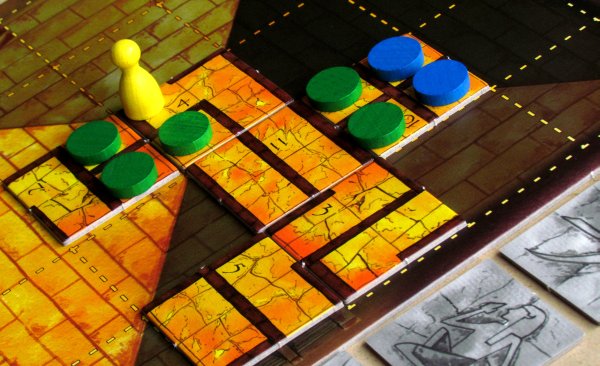 Shortly after beginning the match, players must also choose one of three entrances to the pyramid, where their figure starts its survey. One leads from the bottom and then there is one on each side. The hero immediately moves through free corridor, as far as it goes and will proceed deeper into the pyramid, when passage allows him to do so. After first 15 steps, player places a white depth token into the pyramid, gray and black are placed later every other 15 paces.

Game ends, when all players have used their twenty-five tiles to build the pyramid. It is now completely filled with corridors. Number of points is determined mainly by how deep their explorer managed to explore it. But also treasures are important. But they count only, when they are surrounded on all four sides by a wall and explorers path across the pyramid leads next to them. Only then can these tokens bring one to three points according to their color. Player with the highest score of victory points wins.

Das Labyrinth des Pharao will put you on start of exploration of the pyramid. But you will not only control pieces, but also how the corridor is build, as you get tiles to create it randomly. It is not so easy to create a maze, that leads deep into the pyramid without any interruption and you have to also think simultaneously about surrounding it by valuable treasures. Only by doing a combination of both can players succeed and celebrate victory among other archaeologists. 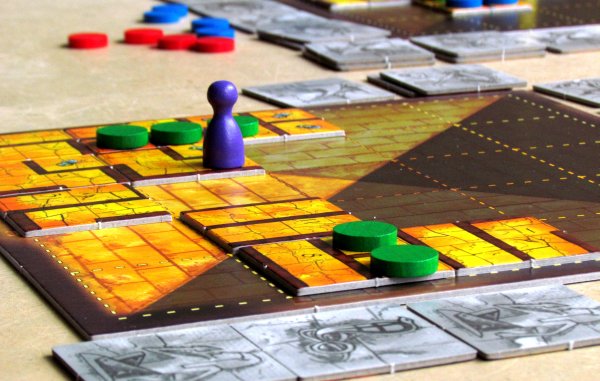 All players are participating in turn at the same time, which is certainly pleasing to the experience. There is no waiting for the opponent. This makes the game pass quickly and it does not matter, how many opponents participate in the actual building. Whole fun is over no later, then after 45 minutes, giving you nearly two minutes to complete each turn. And to that number, you get only with really thoughtful opponents. Unfortunately, due to their own game board, game is lacking any interaction between adversaries, so everyone builds his own labyrinth and that’s it.

While there is random flipping of the cards, there is not luck in the game. All participants have the same chance. They receive the same corridor and must plan and place the pieces better, than their rivals. Since there is no rule restricting placement, each pyramid always turns out quite differently. On the other hand, there is danger, that a player with a good memory will after seveeral games have a good idea, how the pyramid should look like (it’s only 25 pieces). He can then place tiles appropriately and always get to the same result . But honestly, few can manage such a thing without errors, so you will not even try this.

Rules are done with very original way, where the images are in the middle and around it flow two language versions – from left to right, German and English. In addition, the rules are overall clear and transparent, which is in English also work of Ralf Sandfuchs and Rick Heli, who made translation from original German. 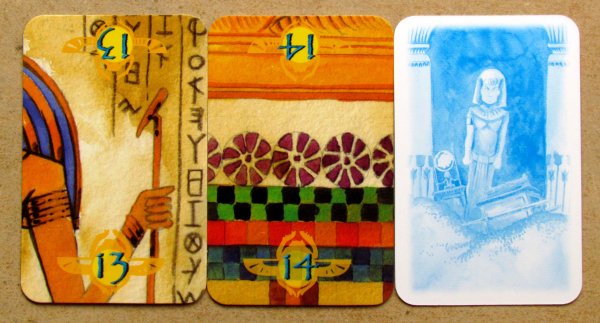 Game contains three versions, how the exloration can proceed. This is good news for durability of whole game. But it’s not the only reason, why you should start with the simplest version. In a variant for experts, players can easily overestimate their strength due to the presence multipliers. Colors are not restrictive and treasures are not placed gradually, but players may choose, which color they like to place at any time during the game.

The deeper in the labyrinth heroes are, the greater the value of the treasures is. This reduces the importance of the corridor and brings much more emphasis on collecting treasure, which is at the same time more difficult for players to accomplish. This variant is convenient especially for demanding tactics and advanced players. Last way to play the game is possibility of using special tokens and bet on the following number. This variation adds differences between players to the game and allows you to get special purple tokens. But this brings also luck with it, which may easily determine the winner, and we did not like it nearly as much as the other two versions.

Processing of the game is slick and graphics really remind us of Egypt and its famous pointy building. For such a small game box, it contains a surprising amount of cardboard and wood components, but players will be giving them full use in their expeditions. Some tokens are here only to improve overview of how deep the player had stepped into a pyramid and really help a lot, when getting overview or counting points. 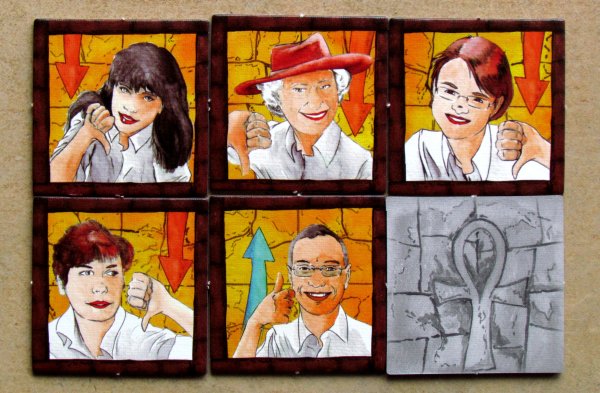 Das Labyrinth des Pharao is a nice board game, that will be appreciated by families with children, but surprisingly, also by intermediate players. It contains interesting possibility to strategize and improve with each match. It’s not easy to forge deep into the pyramid, as players often get a tile, that they simply do not want. But it can be placed anywhere they like, so its easy to compensate. Eventually, everything should revolve around treasures, for which you came in the first place. One of these hidden treasures can also have appearance of Das Labyrinth des Pharao board game itself.

Das Labyrinth des Pharao looks like child's play judging by its cover. But eventually, it turns out to be very interesting entertainment for everybody. Players are building maze out of tiles inside the pyramid, while also trying to get as far and deep as possible. In small enclosed spaces, various treasures may be hiding. These were left here long ago by pharaoh (= you in the previous rounds). Players must think strategically and plan ahead. All competitors have the same chances with same tiles, but thanks to this, its possible in principle to repeat the result and form same pyramid during next game, if you have a good memory. The game offers three options to play and thanks to a clever mechanism, you simply cannot get bored. It is suitable entertainment both for families, as well as for advanced players, who can increase emphasis on the treasures and use even more difficult version. Das Labyrinth des Pharao game is not well known, but its really well done, while offering nice entertainment.