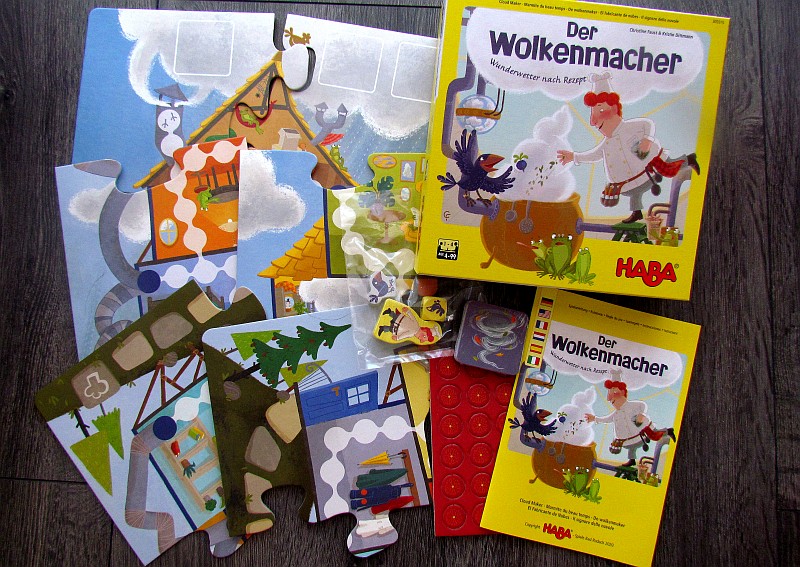 What was I thinking? Making clouds is a team effort, but today I’m here on my own. My wings are full of raw materials and I’m slowly starting to despair. But I will not give up! Not yet! Before my master comes home from the celebration, I want to prepare the most beautiful clouds for him. So he can see, that he can take a break from his hard work from time to time, and yet still, fluffy buns will not stop floating across the sky.

Children will also start cooking clouds, while visiting the world of the new board game Der Wolkenmacher, prepared for all the little ones by Christine Faust and Kristin Dittmann. The former also took care of the illustrations. HABA dressed their work in a yellow robe and sent it to the world as one of its novelties for 2020.

On the lid, we see the chef himself, the creator of the clouds. But he will not participate in the game. The game board consists of six pieces and has a path drawn at the bottom. This is the track, where cloudmaker will hurry home. But opening the front door of his building is exactly, what makes the game end. In preparation, players place the main crow’s figure in the chimney and fill the individual rooms of the house with three or four random ingredient tokens. He must not look at them. Clouds are slowly forming at the top of the plan in the form of three recipe cards, each requiring several ingredients to set sail into the world. 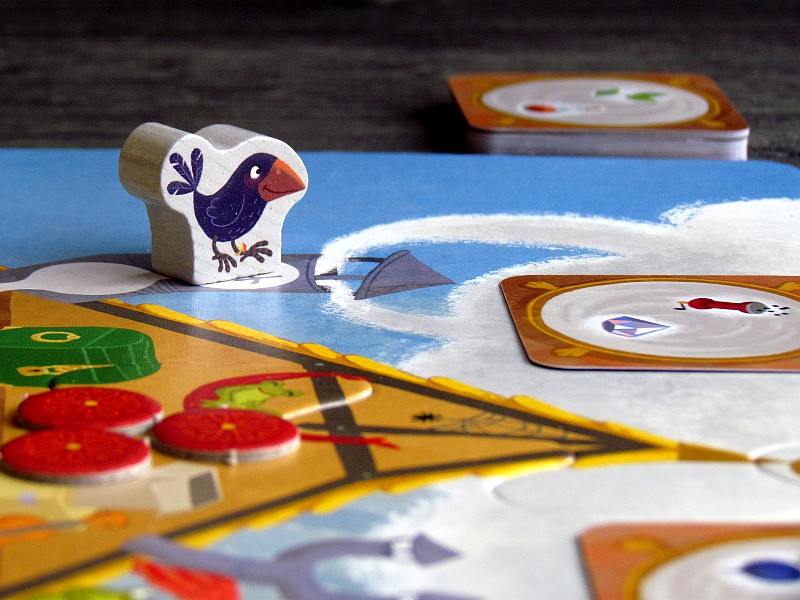 Starting player takes die in his hand and rolls it. The resulting icon decides what action the player can take. The crow will always move around the house, it’s just a matter of whether it has to run in one direction by the prescribed number of steps or it can fly to any white square. An exception is the image of a chef’s cap. At such a moment, the player’s move is wasted and instead the chef’s figure moves one step towards the house.

But back to the crow and her adventure. If black creature stops its movement on the white square, the active player can choose one of the tokens available in the room and look at it. He must hope, that it will be one of ingredients, that at least one of the three recipes requires. If so, he can place the token on the card. If this raw material is not needed at all, it must be returned to the room. In doing so, he and the other teammates should remember, which token it was and where its lying. 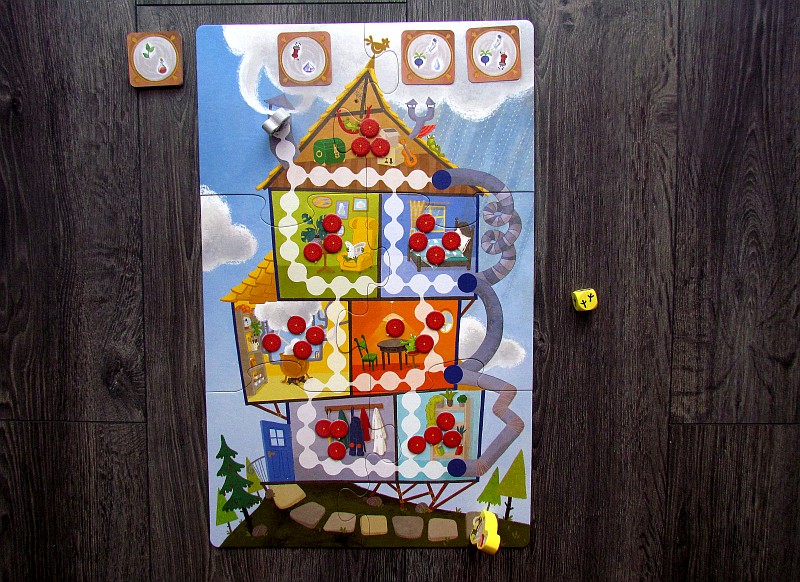 If the crow stops moving on the blue square, it can crawl through the ventilation pipes to any other blue square in one movement. That doesn’t end the turn, because the target room of the shaft is also the place, where player can reveal a token, as if he’s stopped there in a regular way.

Throughout this cooking, players can meet frogs, which are located on some tokens. They are enemies any cloud preparation, because they are the ones, who predict and control the weather. Therefore, frog tries to make the cook’s task as difficult as possible by exchanging positions with one resource token in another room, after its revealed. Fortunately, players can at least look at it during this moment.

In this way, players take turns throwing dice and collecting resources until they can find all the necessary resources to cook all cloud recipes. But it can also happen, that the cloud maker himself arrives home sooner. This also ends the game, the surprise was ruined and the players failed in their joint efforts. 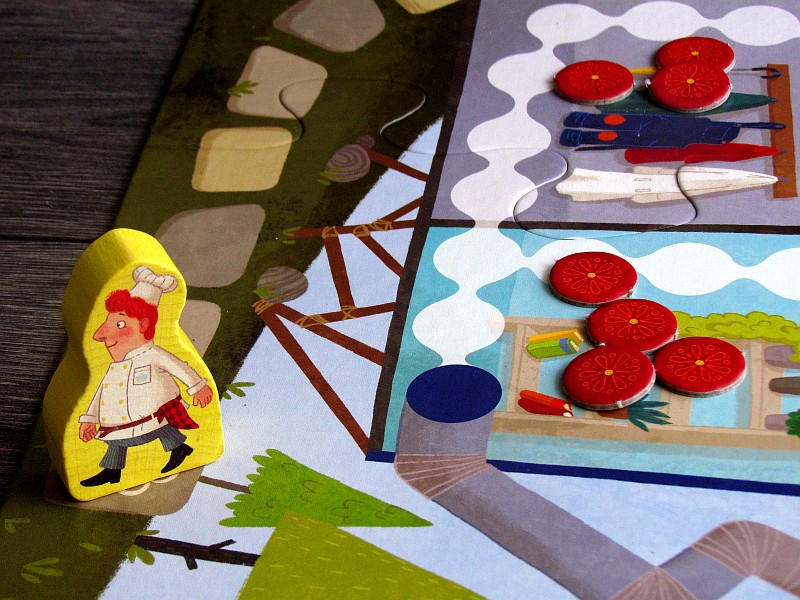 Der Wolkenmacher is a game about creating clouds, which is a wonderful theme. And even more so when designed primarily for children, straight from the age of four. The fun is focused on memory and has really simple rules that even these little ones can learn easily and quickly.

But of course, luck is at the very beginning of success, because only a roll of the dice decides what the player can actually do on his turn. Fortunately, this is usually the movement of the crow, which can be influenced, either by selecting the direction or squares. And here the children learn to make decisions so that the biggest advantage for them comes from the choice. The cooperative element stands out here, where they can negotiate and the smarter ones will be advising those less skillfull. This keeps everyone constantly learning. 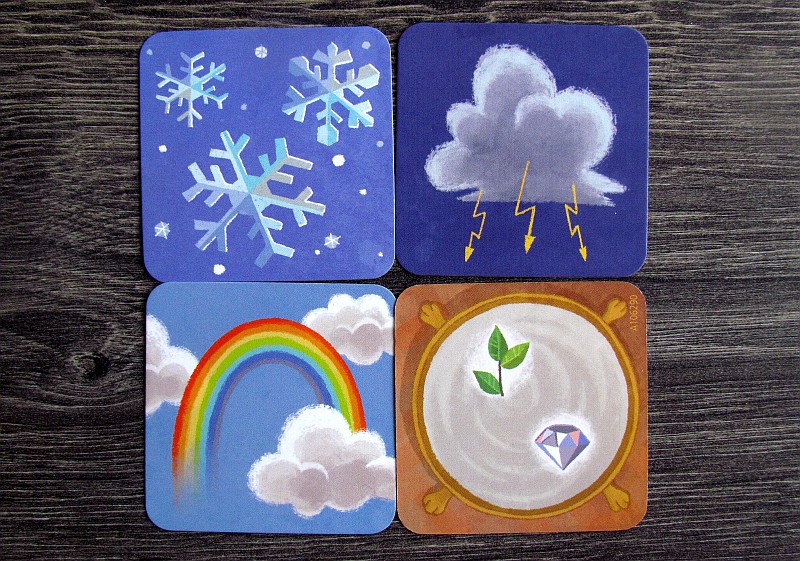 But movement is only a means of getting to what is primarily at stake – ingredients for cooking clouds. Players get the first chips thanks to luck, but they can gradually improve their chances at least a little, as some of the chips already drawn are eliminated in memory and if they do not draw them again, they will significantly increase the probability of overall success. But if the hat icon is rolled disobediently too often, then the chances of winning are simply not real.

The overall match is very fast and the end of the cloud-building effort is within ten minutes. So children just have the opportunity to enjoy everything the game has to offer, but nothing will distract them and they will not have time to lose interest.

The target audience is also influenced by processing, that perfectly matches the topic. The wooden figures are great, the illustrations are successful and the overall impression of the game is definitely excellent for children. A good choice was also a creating plan from puzzle pieces. 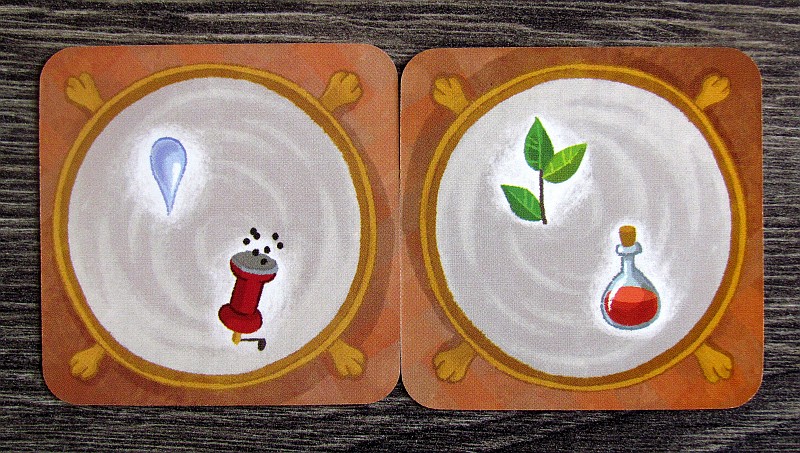 Der Wolkenmacher is a game, where a pile of clouds bubbles in pots. And children are rewarded for their efforts at the end by being able to reveal their pictures (randomly selected recipes from the deck of cards) and see, what weather they have conjured up. A beautiful theme is an essential formula for success in the company of simplicity. Der Wolkenmacher is, of course, a random, but still slightly tactical game that will excite children.

by Dušan on 29. 07. 2020
A lot of things in the universe looks random. Meteors fall as they please. The planets are seemingly scattered across the sky without any logic. But behind [...]
Comments
Leave a reply