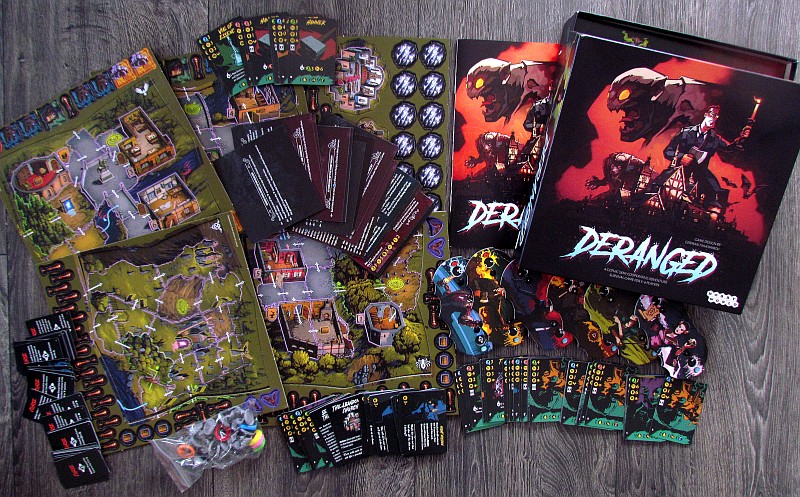 When we went to sleep, we had no idea. But at night, we were awakened by screams and my roommate had a bad idea. The view from the window was not enough for him, so he went for a look on the well-lit street to investigate, what the screaming was all about. I saw them rush at him, but I couldn’t do anything. I pulled up the blinds so they couldn’t see me in the window. I was all the more surprised, when my friend returned an hour later. But I suspect it’s not him.

Deranged is a game, that will bring a lot of surprises and tension in each game. This is exactly what the author German Tikhomirov promises. He created the game under the auspices of the Russian publisher Hobby World. The illustrations were provided by Anton Kvasovarov. This is a hot novelty for year 2019, which is not yet on the market, but we managed to get a review sample.

Horror in the city radiates from the lid, where one of the monsters screams, and above the city rises the character of one of the heroes. Players inside will discover four boards, that fold into a city map. They are filled with buildings and boxes, which are connected by arrows. But it also shows a picture of the sun with spikes, which serves as a wheel counter. Participants place the time indicator on the first beam. Exploration tokens have to be also spread on the map to indicate, where items can be found. Most of the chips are then placed nearby. 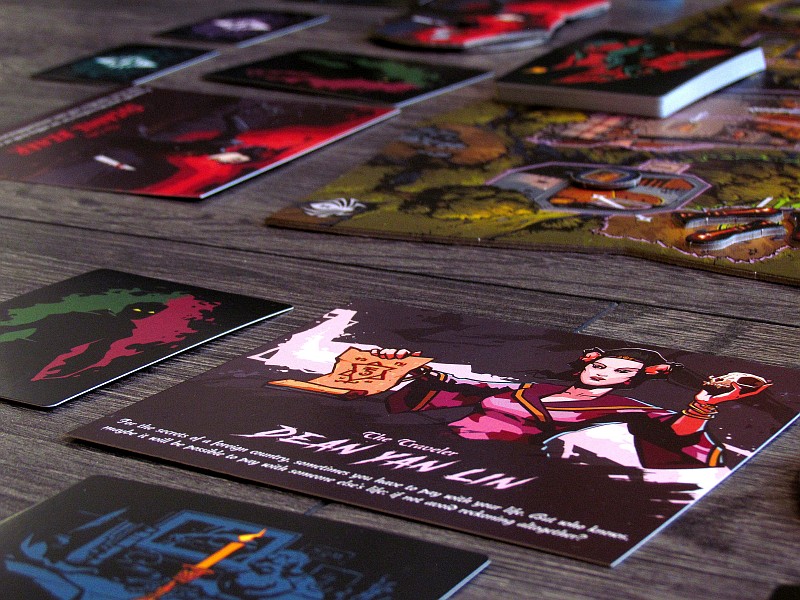 During the game, the members of the city expedition are primarily tasked with choosing a scenario with six cards. Each of them belongs to one part of the game, because the whole action takes place within three days and three nights. At the same time, they also prepare packages of items, which they divide by buildings and prepare them shuffled near the map. They also place a stack of reward cards here.

Each player now chooses his character, gets a miniature and a rotating double pointer to symbolize health and sanity. In addition, each participant will receive an identical pack of seven action cards, which will be available to them from the beginning. They draw four top cards from the shuffled deck and then receive additional cards – one secret role, then two curses, and also a set of three night cards (not even that player can look at). Figures on the map do not have to start at the same place.

Games are divided into six rounds. Each of them lasts until enough time has passed to change from day to night or from night to day. In his turn, he can decide, if he wants to play a card from his hand for its action or relax. If its a day, first action is free. If its a night, he must sacrifice one point of sanity (refreshable by resting). 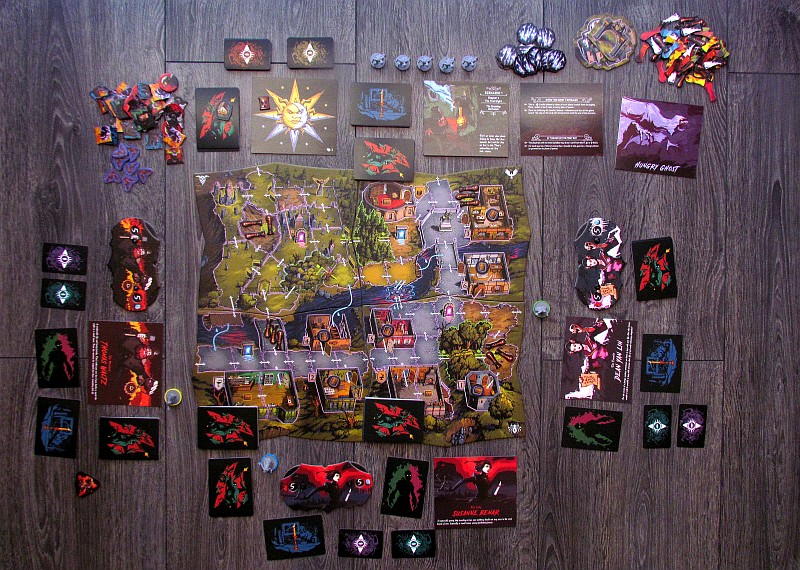 There are a number of icons on each card, and there may be also some text skills. Player can then choose from traditional actions, such as movement and attack. In addition, he can also search within his location, if it makes sense (that is, if a search token is present). When moving, players must listen to arrows, that show the only possible directions to move to. A second action can be taken as part of a turn, but the player must be willing to sacrifice a sanity point always, no matter what part of day it is.

In combat, the card played also determines the strength of the attack from which the attacker’s defense value is deducted. On the other hand, in response to a hero’s attack (players can attack each other), you can play a defensive card from your hand to defend. And while some locations can only be explored once, buildings allow for repeated searches. As a result, players can find items cards, that become part of his deck.

Instead, the player can decide to rest. This is because due to different moments and decisions, the level of sanity decreases. And only by rest can one get back to normal. Restored amount then depends on whether the hero is located indoors or outdoors during this action. 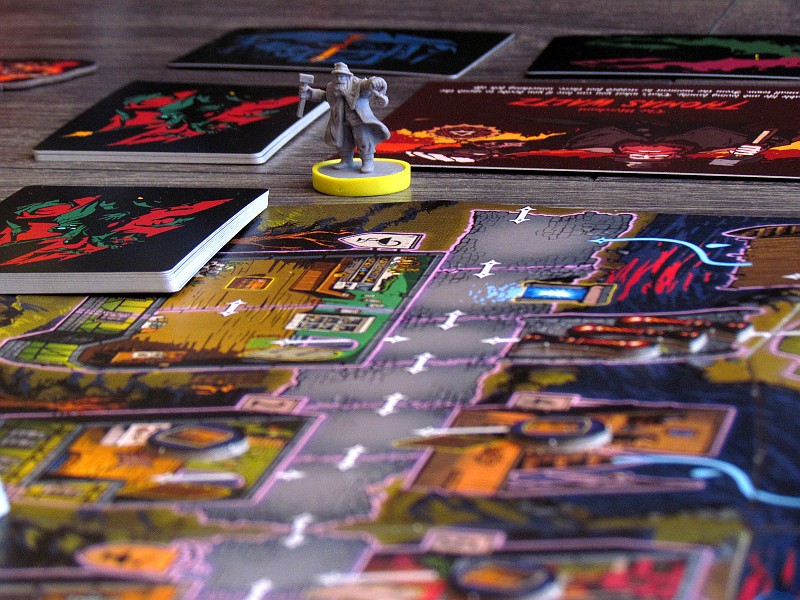 As soon as the last player in the team had his turn, it is time for the monster phase. Its behavior depends on the card, it can move around the map, search for heroes and attack them. As a result, the hero may run out of life points. But death is just the beginning. The fallen figure gets a curse. On the other hand, as a result of madness (running out of points of sanity), the character cannot take any action.

At the end of the round, time of day will change. Players first evaluate the scenario’s effect before everyone reveals their night card. As a result, players can become deranged. From that time, he has his own conditions, gets different miniature and turns his card around. He will be human only during the day, while at night, he will hunt people. Only by killing one of his former teammates can he get rid of the curses (except for a special card, that allows it too).

But everyone can still win. They just have to be in the right place at the end of the third night without being cursed or deranged. If player fails or at any time all players succumb to the title infection, they immediately lost. But victory is divided as a cake for each of the participants, part of them can win and part can lose, based on their state. 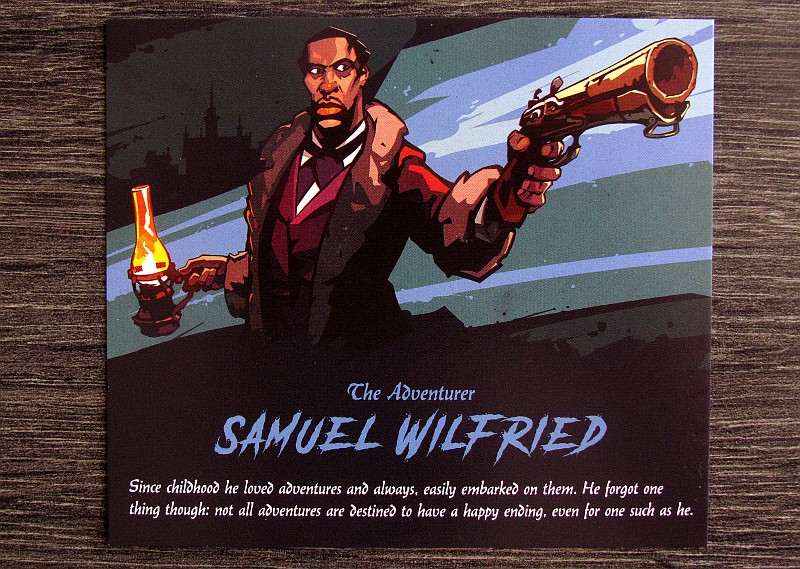 Deranged is a very exciting and interesting game. Meanwhile, it  is looking for its way to the players, but it will certainly find a lot of fans among the lovers of semi-coperative games. This is because all participants must work closely together to survive from the beginning. But once one of them becomes crazy, his only way back among the people and hence the chance of victory is to kill one of his former friends. Fortunately, since death is not finite here, its not as bad.

In terms of survival, everyone is working together, but in terms of victory, each player is responsible for himself. A player can celebrate only if he fulfills all three conditions. Since the number of curses placed on his head can be much greater than one, it’s not easy to get rid of them at the right time and get no other.

Players do not normally have the motivation to attack each other, but as soon as one of them succumbs, the situation changes quickly. Change comes randomly with the help of cards, so you never know ahead and you can’t prepare for it. The same works with curses, which are easier to get rid of. Even so, the hero must come to a place and fulfill a special condition to get rid of the curse. 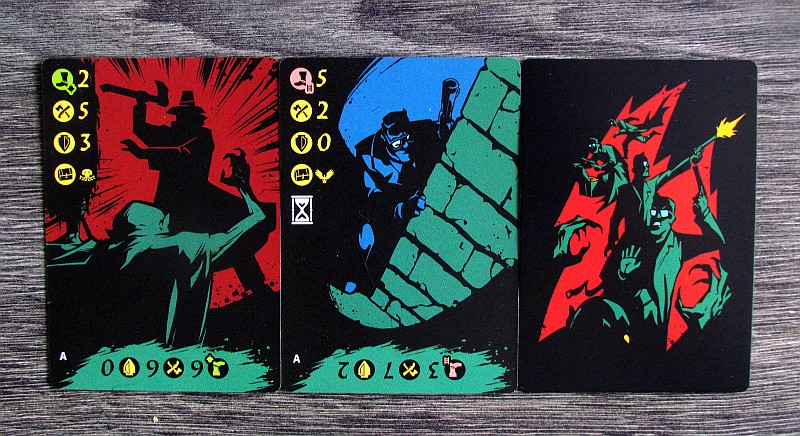 In addition to the classic content of movement, reconnaissance and combat, Deranged also offers a number of differences. Each player can get a specific item as a result of their role card. All you have to do is complete the task given by the card. Also of interest are the arrows which, while disturbing the impression of integrity, improve accuracy.

But the most exciting moments include the transformation of human into a monster and back. It all depends on what part of the day it is, as if he were a werewolf (they are not missing in the game anyway). And in every role, he has a little different duties and rules.

Individual scenarios use different monsters to face players. Each scenario prepares surprises that, as you will discover, you will not have much motivation to repeat. Therefore, the so-called open game is described in the rules. Here players choose cards for the next part of the day randomly. So they can never know exactly, what is waiting for them and the game is even more unpredictable. 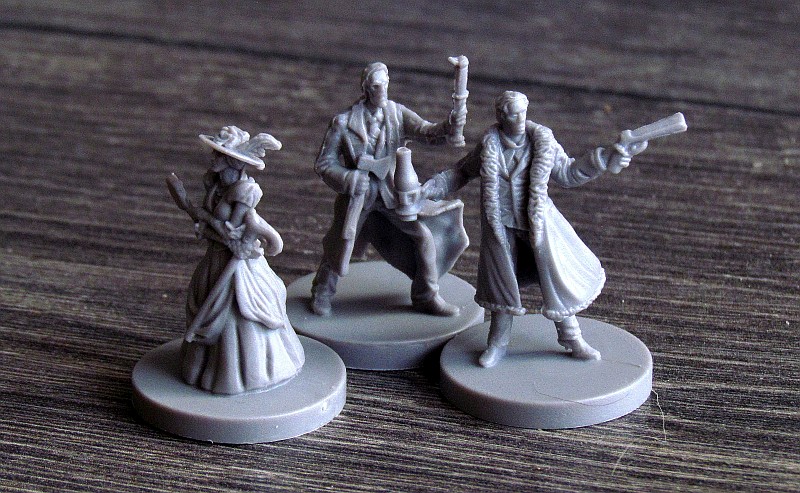 The game is very difficult and lasts quite a long time, at least around two hours and more. The absolute minimum is three players, but to enjoy everything, we recommend even more.

Processing of Deranged is very nice. Illustrations are full of imagination and have their own style. Of course, you will be pleased by the separate rotational indicators of sanity and life. Undoubtedly, even miniatures with average quality will do the pleasure.

Deranged is an interesting game, that perhaps does not have offer enough opportunities to betray for semicooperative genre. Rather, it is a cooperation with a twist. But even so, there are some interesting moments, among which we can think mainly of interesting scenarios. Deranged certainly did not disappoint us, because it offers tension exactly as you would expect.

Deranged is a game, that has indisputable qualities and can be great fun, if you are looking for a dose of tension and cooperation controlled by tricky moments of betrayal. But even the death does not exclude the player, and they return and must work together again. Fights with monsters are everywhere, time is ticking and scenarios bring unexpected moments. Deranged is a great game.