by Dušan on 31. 07. 2014
0
previous article
Review: Das Labyrinth des Pharao - an Egyptian maze
next article
Review: Kemet - battle at the foot of the mythical constructions
Contents 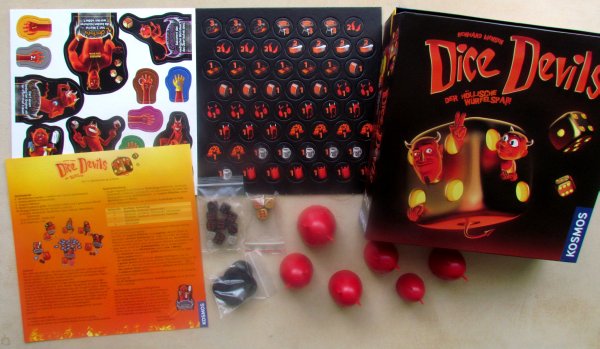 When you’re in hell every day, you start to get bored soon. Czech fairy tales are known for devils often passing their time with cards, especially whist playing for human’s soul. But even hell gets news sometimes. This time, cards were suddenly replaced by dice. But before devils learned to play with them, something unprecedented happened. Hell froze over. Each fire and flammable piece is extremely valuable. And devil do not know anything better, than to play for it.

A game, in which all this already happened, is called Dice Devils. Its author is Reinhard Mensen and this fun came in production of Kosmos publishing house in 2013 with illustrations by Stephan Claus and Martin Hoffmann.

Red and black box continues in what we touched in our story. It shows a large dice and behind its pips, there is Lucifer and one small merry devil peeking out. One value then has a tail, that goes downwards. Just one chucking and suddenly the lid is put aside and we peek inside the box, where more storage trays are located. 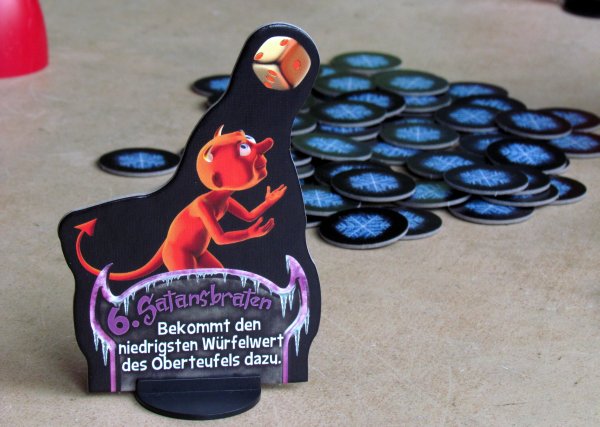 Small round little rooms at the bottom of the box are each hiding one horned devils head, which will serve as cups for dice. There’s one big for Lucifer, one for little devil child and four remaining middle sized for ordinary devils.

Two larger compartments are then ready for cardboard pieces, that players must punch out from the prepared sheets. Among them are mainly six figures of devils, which are sorted by importance with their height. These include plastic stands, which will make them into real beings. There are also some numbered devilish hands and especially tokens with things, that will help bring a little warmth back to hell. List is ended by title dice, that should bring fun not only to devils, but mostly to you.

We’ll see, how the game will entertain us, when we prepare it according to simple instructions. Each player gets one randomly drawn devil. However, according to number of players in the game, there can always be present only some of the characters, because each has its own special skills written in German directly on its body. Players set their identities ahead and get also a token representing devil’s hand. This time its not red, but in their color instead. 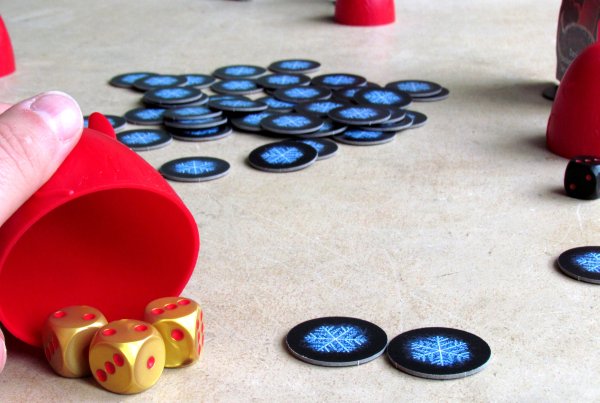 Dealt devils determine, which player gets which cup and dice as his relevant property. Lucifer gets the biggest three dice. Those common devils get two black dice and a kid devil gets two gray dice instead and also the smallest devil’s head to shuffle them. All heat tokens are puts in the middle of the table with their pictures down. Then you can start your hellish endeavors.

At the beginning of each round, Satan orders his underling to expose a few heat tokens in the middle of the table. Number of revealed items is always one less, than number of players present in the game. These tokens also have in addition to image different point values, that will be important at the end of the game. Ultimately, players will decide who gets them in the second stage of the round.

But first they must all scramble dice in their cups. Results should not be visible to anyone else and players leave it buried under their bowl with horns. Now, in order of importance (from largest to smallest), players pick with, which uncovered item they are interested in by placing hand token next to it (= reaching for it). They can also choose source of heat, which one of their opponents has already chosen. In this case, this fight will be decided by value of dice hidden under the cup. 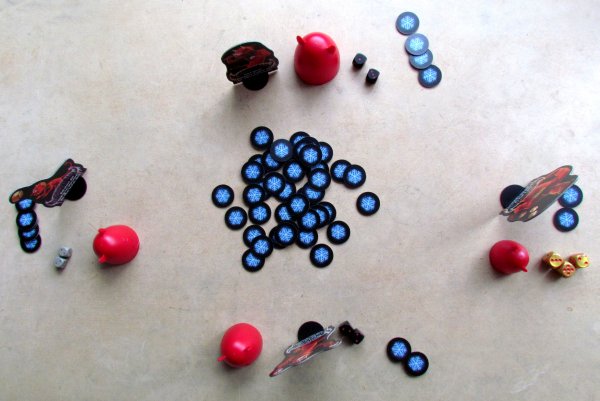 But only now it comes to the most important point for the development of the game. If there was any match during this round by dice value comparation (there always is, because there is fewer tokens, than there is players), winner of this fight might exchange his position in hell with loser. He gets not only his cardboard figure, but also dice and cup. Only hand and already gained tokens remain sitting in front of their owners.

Players can now finally reach for their collected tokens of heat sources. Some may even remain on the table until the next round, in case nobody was interested. Then a new round begins by revealing other things to get devils warm. Game continues until one player collects ten such tokens. Last round is played and player, who reached highest point gain is the winner.

Playing with dice in Devils Dice is fun, which is emphasized by role exchange. Therein lies the essence of the struggle for heating of hell. And the largest portion of fun for players, who crave for some tactical options to fight with others. 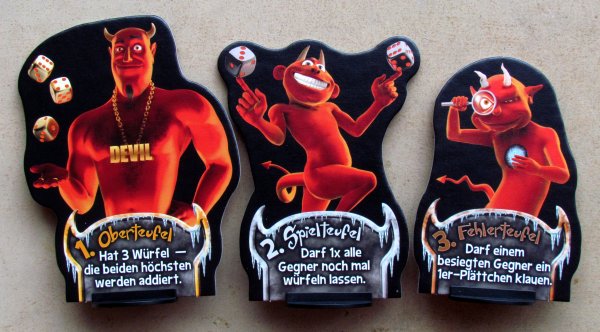 Each character has his own special abilities. These sometimes determine, which dice can be used for comparison. Other times, they can steal and exchange tokens, or even win draws. And Satan’s underling has ability to add third dice, that Lucifer did not use to their advantage. He can therefore calculate with one more (although the lowest) value of foreign roll. But that’s also reason, why he has only two dice and his values have no six or five on its six sides.

The game is full of uncertainty, but it only applies to duels. Its not about who has better skills, but more advantageous position. The order, in which players collect heat tokens, allows devil to choose his opponent wisely. He can then swap places, in successful.

Game time corresponds to dice game nature and does not exceed half an hour. Players alternate quickly, they are constantly involved and do not wait long for no man. Therefore, neither number of players has any significant effect on the length of the game, although there will be difference between game of three and six. Quite a setback is less number of conflicts of characters, that are involved in the game, when players are few. It is clear, that this game belongs to category – the more players, the better. 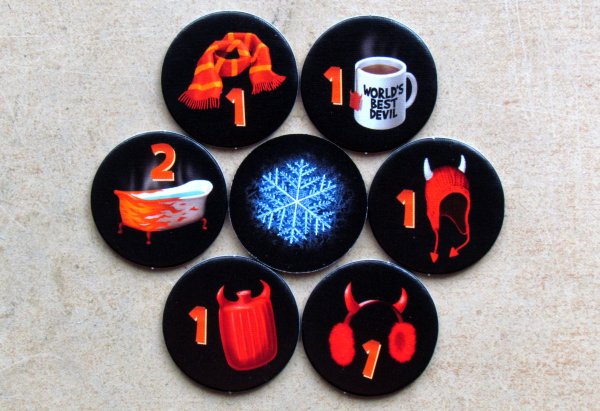 Game contains a distinctive humor. Theme of heating hell is fun. But the game is really about short decision-making and often you just can not control your chances. We like processing of this game, which includes some German text, but it is a few sentences, that you can easily remember. They cover the skills of individual devils. Designed cups provide game an unique look.

But all this is not enough to make us somehow strongly attracted towards Dice Devils. This cute game moves only on wave, from which it can set catch fire only with right audience. We could not find this sweet spot it among our fellow players. The atmosphere is limping and overall the game does not offer anything, why you should go back to it. Certainly there is a lot different and better dice games on the market. Dice Devils remain a matter for only a few selected little devil, who will sit and enjoy this game.

Dice Devils tells of a time, when hell froze over. All residents have no other option, than to look for something to keep them warm. But there is only few such items and everybody would like to have those. Devils will play dice for them. Everyone has some skills, hoping to use it in his advantage, but everything is determined primarily by hierarchy, in which devils live forever. This, however, can easily be changed, when the devil loses duel to someone and becomes a beautifully warm prey. Tactically worse positioned players have opportunity to choose and challenge their opponent. But it is also all you can control about this game. Outcome will be decided by outcome of a dice roll, which you fortunately know ahead and know, what duel you should go for. The game stands out perhaps only by processing, that offers interesting dice cups. In addition, it is average dice game, that actually does not hold any surprise. Dice Devils are fun, but you will surely find a number of other games, that deserve your attention more than this one.