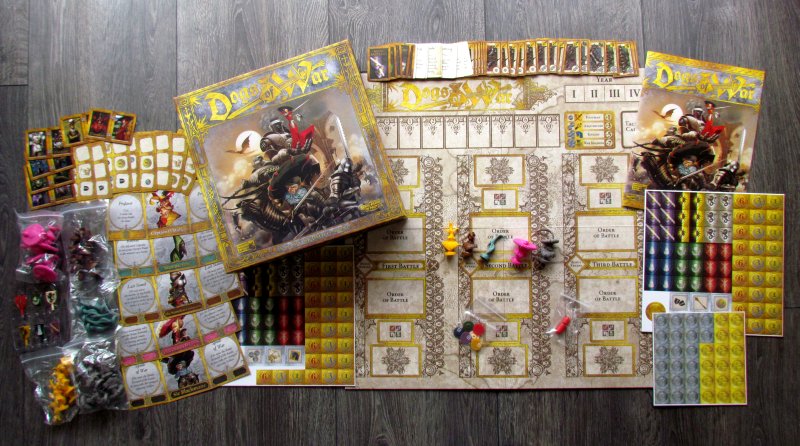 War requires a good grip. And courage. With that knowledge, I joined my unit, to faithfully serve it. Forever. But I knew, that eternity can sometimes last only a short time. Now I’m lying in the trenches with my shoulder oozing blood. Others are beyond all those funny faces and beer and put on a dour expression without a modicum of sympathy. War is full of dogs..

Hats and battle on the edge are guaranteed to fill board game Dogs of War up to the lid. It was presented to world market by Cool Mini or Not company and distributor Esdevium Games. This is a new game from designer Paolo Mori, published in 2014 with illustrations by Christophe Madura and Mathieu Harlaut. But besides these large compaines, there is also one small publisher called Spaghetti Western Games, who was at the inception of this game.

Box, where all those war hats are hiding, is quite big (and can be measured boldly with Zombicide). Front side shows us scene, that gives us a little hint of game contents. All that is dominated by robots, but also mythical knights with swords and even some dragon flying in the background. And those robots and all the other vermin corresponds to weight of box itself, which this time does not include smaller cardboard boxes inside as with other games from CMON. 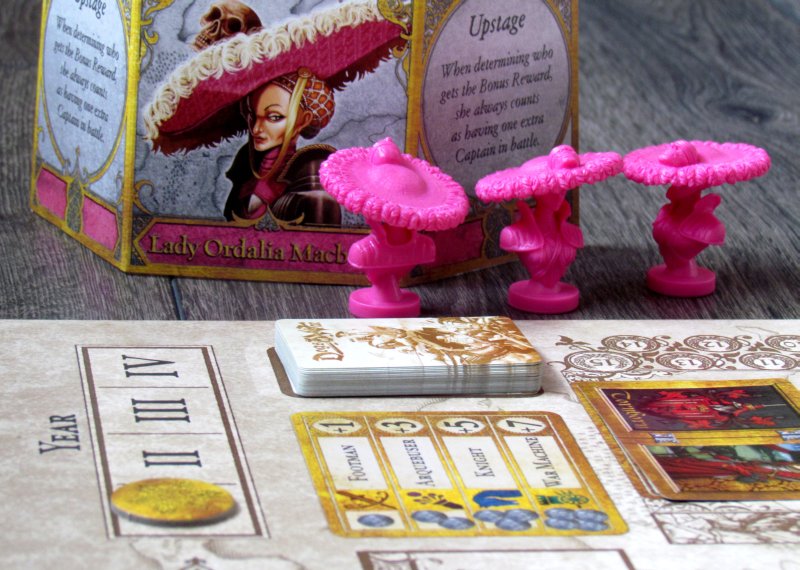 There is not enough plastic miniatures to need something like that. Instead, we get classic plastic insert lying still on the bottom, but initially covered with a folded game plan and square pamphlet of rules. This book can be a little intimidating, but length of the actual rules spans only over a few pages (about six).

Board impresses you with its curly style. It is dominated by a trio of columns, that represent three battlegrounds next to each other, each for two opponents. They all have a scale for tug-of-war of two rivals, but also a pile of boxes, which allow playing cards and sending captains (= miniatures). Then, there is years counter for turns and scale of influence for families.

Board is not nearly the only one thing, that attracts your eye. There are screens for individual families, pile of tokens (money, victory points, influence of individual families or rewards), but above all miniatures. Thirty captains is exactly, what you would have expected from our previous description. They are simply busts with truly extravagant hats. Six other stands represents coats of arms of various families, flag standing on one leg. And then, there are house cards and their support (six), battle cards and four types of soldiers (footmen, arquebusiers, knights and unstoppable war machines). 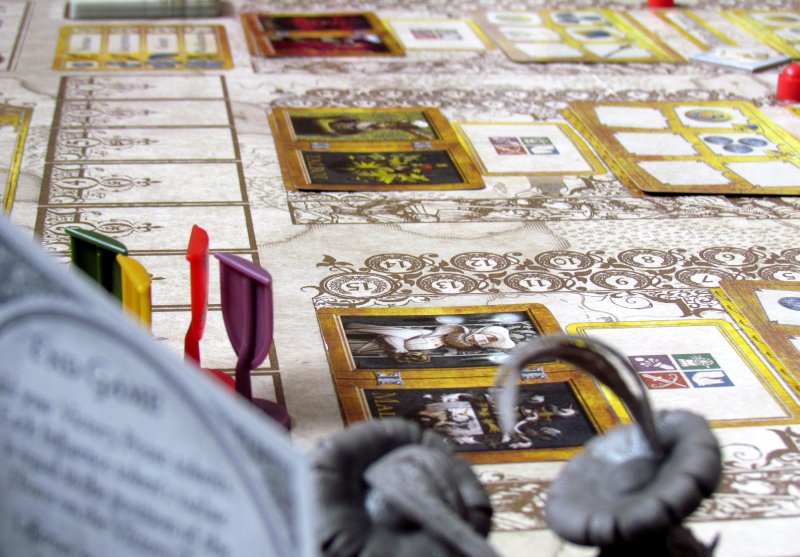 Beginning of the game is very unassuming. Each participant takes one a screen, get a few coins, a set of tactic cards and one secret card of support. It binds to one family, which has player hidden affection for. But the players do not play for any distinct nation. Instead, they fight for themselves, while six standards will begin their journey on a square minus one. One counter then arrives on years scale and three will be watching and judging battles. Rest of the components is simply spread alongside the board, only soldiers begin categorized into four packages by type.

Entire game of Dogs of War has only four rounds called years. Each begins with preparation times, when you need to determine by random drawing, which two factions will stand against each other. To do this, family cards are shuffled and played on designated points on the board. Each battle will also get their bonus card and combat commands (six positions). At that moment, they broke into more battlefields and it will only be up to the players, which side they join.

Each of the opponents gets some coins and captains. Their number is increasing with how the game moves in time. Thier finances can then be spent on buying new soldiers, whose price is shown in the lower right corner, while strenght is shown with a plus in the upper left. 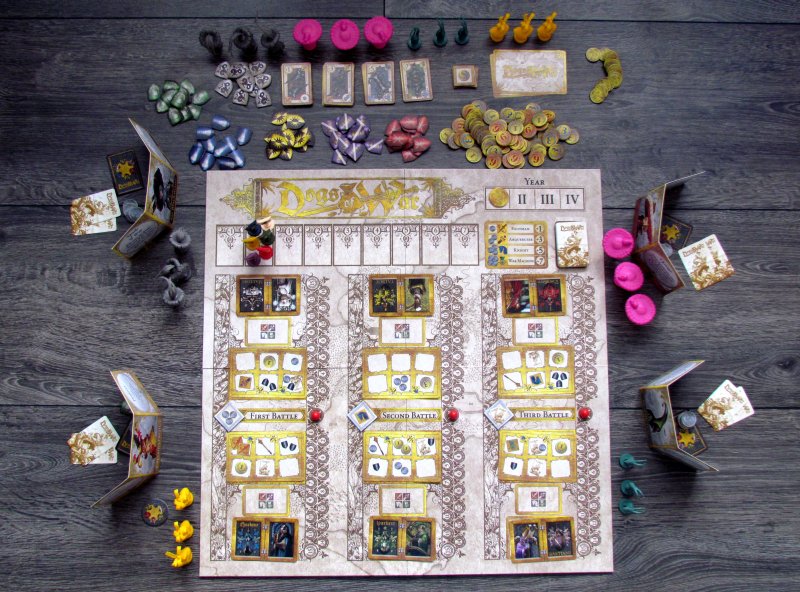 Finally, players can engage in battles themselves. Nicely from a starting player, players take turns and always have a chance to play not only tactic card for its effect, but also send his/her captain and soldier into the battle. But while soldier card goes on an ordinary rectangle, captain have a chance to choose reward for their placement from six options for each side.

Any participant in the game can send cards and busts to any of the six warring parties. For supporting their cause with captain, player gets his reward (soldiers, victory points, money, cards or tactics). But mainly, its all about strength of his soldiers, which has power to move watching battle token towards the supported side on its scale.

Players can gradually send one captain after another and action revolves in rounds with all involved opponents. Only when no one wants to (or can) play, it’s time to evaluate individual battles. The winning party (one whose side is battle indicator located) can move their coat of arms forward by one step on common track. Everyone who supported this faction gets as many points as there are captains on the other side of the battlefield. In addition, the person, who sent most captains, will receive bonus token attached to this battle in the beginning. 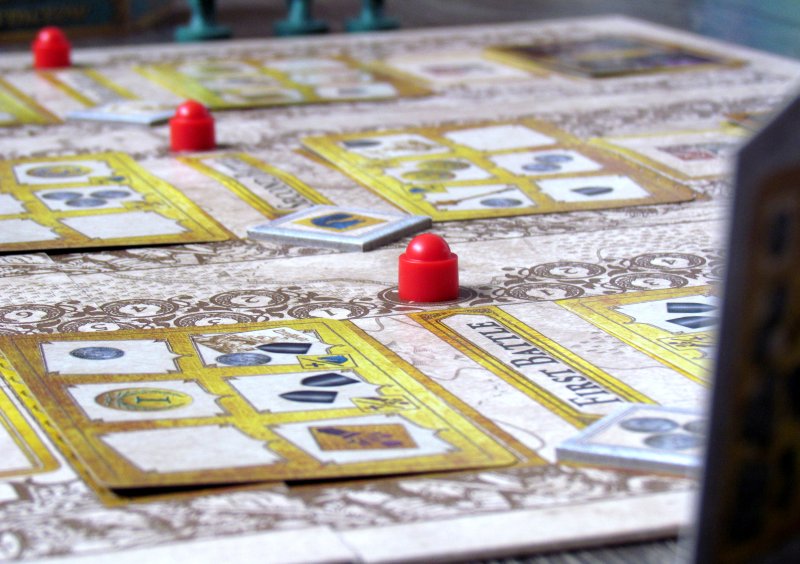 New year than follows with brand new battles and new alliances. Only after fourth one is over, time has come for the final evaluation. Players get victory points for almost everything from cards and army tactics to money. Most important gains come from influence tokens of individual families. Each has a value according to position of coat of arms on the family strength tracker (moved for victories). Winner is the one, who accumulated most points in total.

Dogs of War is at first sight a beautiful game, there is no doubt about that. But somehow, yo do not know, what to expect. Finally, it turns out to be great majority game with a great deal of bluffing and negotiation. And that creates an experience, which you will be glad to return again and again to. While on one battlefield, player’s are standing side by side and contemplating against others, you just need to look a little to the side, to see these two players standing against each other. Excellent.

Basis of the experience is scale, for which players are struggling from beginning to end. They must be able to support the correct house and cleverly negotiate with others. Now alliances are a key element of the game and provide best experience. Players can promise any rewards and try to negotiate. At first glance, it does not seem that way, but it’s true. 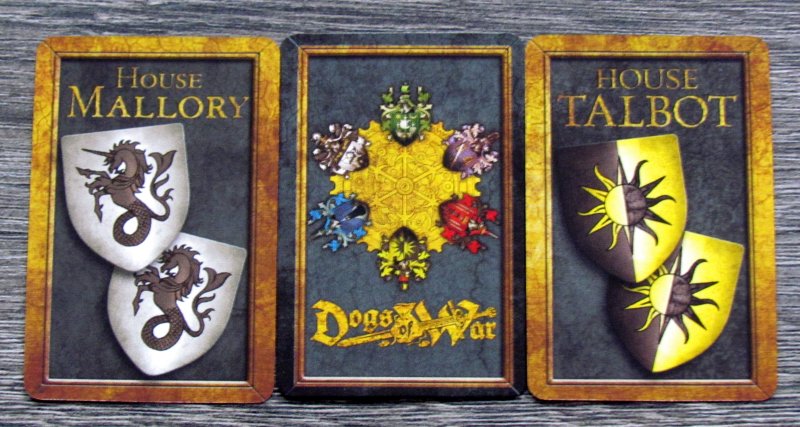 And still, it all remains quite simple and basic. There are no complicated rules, restrictions or convoluted elements. Everything goes flawlessly, if you do not have overly analytical player in your ranks. Susceptibility to analysis paralysis is quite obvious due to worker-placement feature a wide range of fields to choose from each turn. All the resources can be hidden behind player’s screens, so your chances must match well in accordance with real possibilities and others do not need to know.

Scoring of individual battles is very clever. You receive no bonuses for number of your own fighters, but for number on the losing side, which is a great idea. Very tricky are also action tactic cards, that can completely turn around some fight. And the game is also sometimes very insidious and unpredictable. But for most of its parts, everything goes according to your plans and players have it all under their control.

The game is best played in four and even more preferably five opponents. With three, you have more space due to less conflict situations. But its still playable. All games have a reasonable length, since the number of rounds is clearly established. This means periodically reasonable ninety minutes and perhaps even a little less. 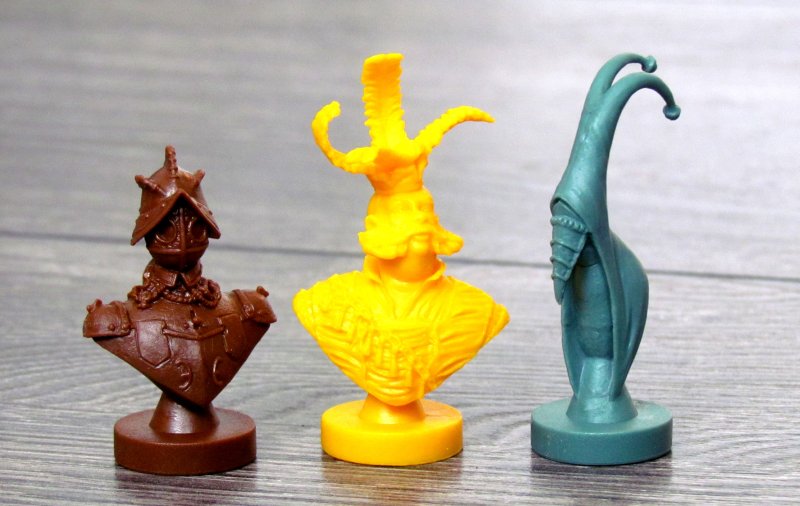 Outcome of this game would be same even if they were none of those beautiful busts and flags. Game wears higher price tag because of it. However, it makes the game look really attractive, which in combination with accessibility can be a good entry point for less experienced players. This does not change anything about the fact, that its overproduced.

We like Dogs of War, because it is a connection of mechanisms, you do not find easily. More surprising is the fact, that the game is not well known. Maybe it’s because of that higher price tag, which is associated with perhaps unnecessary quantity and quality components. However Dogs of War is in any case a great experience and that should be a valid point for anyone wantint to buy it.

Dogs of War is tug-of-war on battlefield, that brings a guaranteed entertainment. Maybe you would not expect it, but a combination of worker-placement, majority and pulling the rope creates fresh feel and becomes truly interesting. The game works well, because it has an interesting social dynamic, where players must forge alliances in short term, but its every player against each other. The game has excellent scoring mechanisms, but some elements may come and urge more thinkful players to stop, prolonging turns unnecessarily. Lower number (3) comes with not so good feeling, but otherwise it works very well and can also be considered as a game with quite simple rules. Dogs of War is one of the most pleasant surprises of games with 2014 stamp.