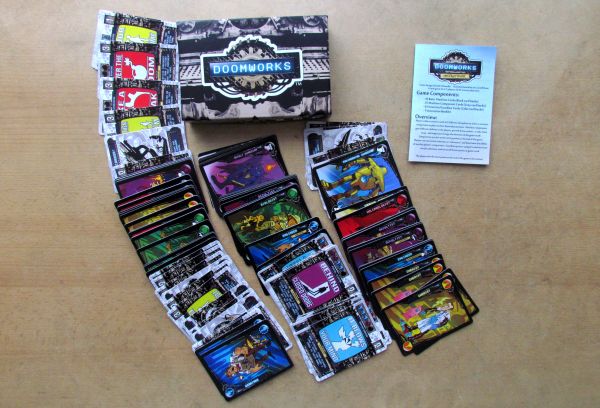 Everyone told me, I was crazy. My mother threw all of my creations in a trash, from where I always rescued them. Broken, banged, smelly, but still mine. Many of them ended up in dump, when I was in school not able to guard them and some of them might still work until now over there. Since certain incident, I was not allowed in laboratories classes in school, because I was dangerous and unmanageable. But even then I knew very well, what I am going to do in my life..

But now I finally have my own workshop. For two years I have created some new inventions for the whole world, until I have secured a financial base for the development of my dream. I am trying to build a destructive machine and sow despair into your homes. Perhaps you have now reached the level of opinion, just like all the other people with whom I have met in my life , but believe me, I’m not crazy! And everyone will understand that, when they see, how end of their days is approaching..

We were talking on our site a few weeks ago about making of atomic bombs. Now, we have tried in our newsroom another way to bring destruction to the world. This is a game, that would please every villain out there. 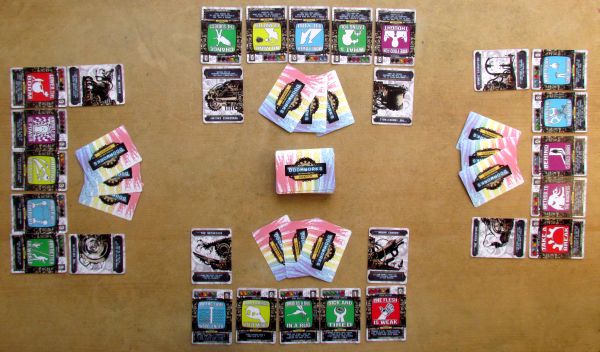 Its called Doomworks coming from designer Daniel Schroeder and illustrations were added Lowell Isaac. This game is hot news of 2013, issued under the author’s own by One Man Games company. How did he do it? Thanks to Kickstarter site, where campaing was running from April 2013 and thanks to support of 135 people, who provided almost double of required amount of money ($ 2500 / $ 4949). The game was printed by The Game Crafter, service used very often lately.

So not surprisingly small box size of this project also immediately reveals, that this is purely a card game. Two decks of cards have just enough room inside to lie down in peace side by side and wait for you to pick them up. And that is exactly, what will you do with them, only with postponement of cover with an abstract drawing of a gear and a rulebook.

You will find out very quickly, that there are not just two, but three types of cards, plus one small paper with rules printed on it. The most endangered of all 108 cards are ten basic card of machines with black back cover. They make at the same time start and end of your future creation. 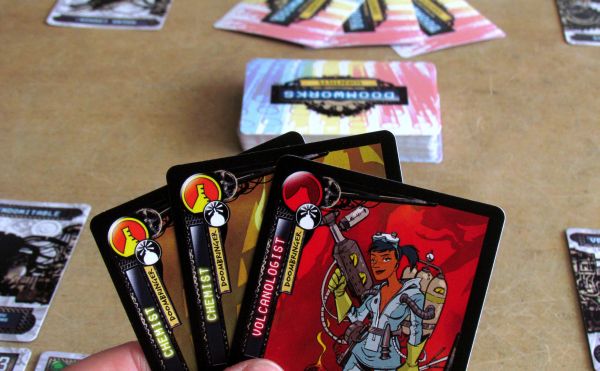 Another 35 cards are components, whose place is just between one and the other end of the machine. On the back side of these part card prevails gray. The largest number is made of cards with rainbow colored reverse, which will introduce you to 63 characters (scientists and guards), necessary for the proper construction of such destructive machines.

And that’s all, but each card has also its essential elements. For scientists, it’s easy to understand, because they represent abilities, which may relate to five areas of science – biology, chemistry, engineering, occultism and volcanology. Some scientists then are simply crazy, which completes the total to six categories.

Same icons with colors can also be found on the component cards for end of the world equipment. In the upper parts, there may be from one to five different colored dots, representing requirements for production work of this particular part. Each element has an underlying type, which is the first icon in the row and also matches with the background of that particular card. Each connectable device may have either disposable or permanent effect, but also a text effect and particularly its private point value. 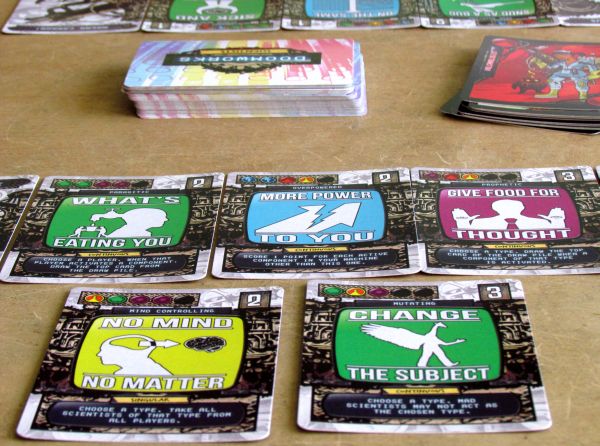 At the beginning of the game, each player gets one front and one rear part of the future machines. The text also at the same time determines, what will bring victory points to the player at the end of the game. Everyone can see these cards of yours, because they lie on the table and form a so-called active region. During gameplay, you will attach new parts from the inactive zone to them, which is the row of cards directly beneath them.

This is a place, where players puts five cards at the beginning of the game. First, they must get them from a randomly shuffled deck of machine components. But it does not stop with first deal, because players continue in the distribution with a draft – player always keeps one card and send the remaininggroup to his neighbor. That continues further, until everyone has five cards with which he is more or less satisfied. This is the five, which are placed in the row under active area.

Then players get three cards of scientists, but this time really randomly and secretly keep them in their hand, where they will keep them safe from the prying eyes of others. Whoever performs the best evil laugh starts the (we recommend training this in advance!). 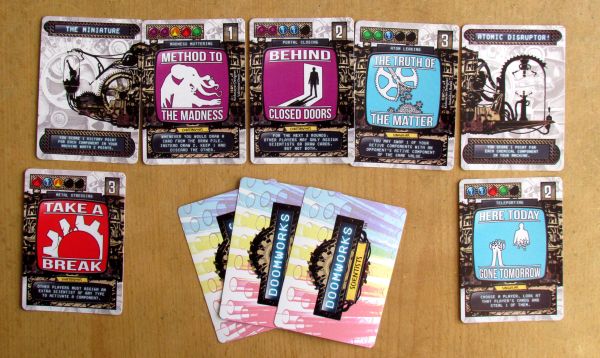 During one round, you have a total of two actions, that can be divided among the six activities available. The simplest way to spend your move is to draw one of scientist or guardian cards from drawing deck. But there is also one different way to get a card. You can pick it up of the discard pile and use it later to your advantage. Game sets a limit of six cards in hand at the end of each turn.

The most important action is to play a combination of scientists, whose skills are sufficient to activate a wicked devices from lower row and place it into your active area. But you have to play them in specified order shown on device card, so last card type will remain at top of discard pile. It should be noted, that mad scientists serve as jokers and replace any other color. In addition, some of the characters played never return back after you use their skills. They are called Doombringers and their number in the game is reduced every time you play them, so beware!

Activating the card will allow you to move machine component into the active region, where it can be connected between the beginning and the end. Furthermore, players can send saboteurs to each other in their turn to block advantages of active components.Their removal requires sacrifice of some scientists from your hand. But you can protect vital componentsagainst spies with guardians.

The game ends, when a player has completed his ominous machine or when you removed specified number of Doombringers from the game. Then it’s time to sum accumulated victory points for components meeting requirements of front and rear machine cards. But there can be also a penaly waiting for you for any active saboteur and vice versa bonuses for guardians in your area. The winner is the player, who accumulated the most doom points result and his device is the most fearsome one.

Doomworks game is an attractive way to build a destructive machine. Featuring a simple gameplay, yet it retains sufficient width of options towards the goal and destroying the world. At this point, it is important to highlight several key ways to gain and lose points. You need to combine speed of building your device with successfully meeting demands of your machine cards.

Cards of central component offer many opportunities to help you in your quest, but at the same time also insidiously damage the opponent machines. The interaction in this game is regular and saboteurs can be found at its merit. Players have a choice of several tactics, they may follow every turn. And each one can be right victorious one. 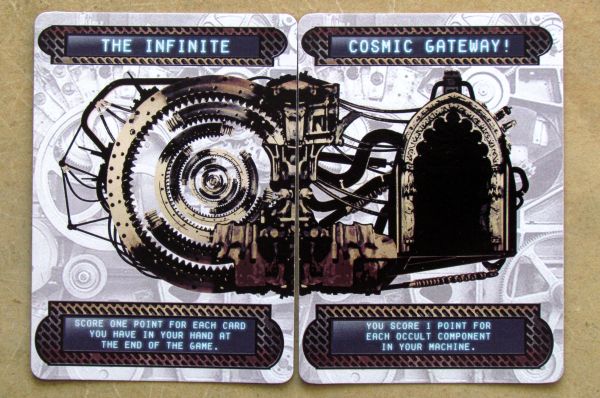 Luck is present in the game due to scientists cards draw. They are the only truly random element, but fortunately there are not so many different types to somehow affect the gameplay by not having a correct color. Rather, it is excellent, that players can choose at the beginning by drafting, which machine parts are closer to their vision.

The game is excellent in all of the recommended numbers, because you always have someone to compete with and challenge. And in two opponents you can focus a little more on your own design and you get to play more. In contrast, experience in multiplayer is much more about conflict and attacking others to prevent them from getting ahead.

Some things have to be remembered in the game, which is not so pleasing. Only supporters from Kickstarter got additional items of tokens and bags. You have to do with pencil and a paper. You have to mark some specific limitations like this (some are valid for several rounds).

What is really nice about this game is its game time, which moves smoothly around thirty minutes and even less. Sometimes it is influenced by players tactic and everything can end well in a quarter of an hour, if someone decides not to seek to acquire bonuses and will run only towards the completion of a functional machine. But these situations do not come often, because they are usually not a way to victory.

Doomworks are really nice and relaxing entertainment experience, which can be learned quickly and seamlessly by any player. Sometimes coincidence may intervene with your efforts, but in the end everything will depend on your plan. If you’ve always wanted to stand on the side of evil and torment James Bond or another hero, then this is definitely a good chance.

Doomworks will allow you to fulfil dream of every villain out there. You can build your own device to destroy the world. Every doomsday machine has a beginning and an end. These cards will also be here with you to set your goals, you will strive to accomplish and tasks to acquire points in the end. At start of each match, players share cards of machine components by draft and these are the only one, they can try to build using their scientists. But they can also use spies to damage enemy machinery and protect their own with guardians. Whole card drawing is a lottery, but there is not as many species in the deck, so you can usually continue building. Some card abilities lasting for more turns have to be remembered or noted on a piece of paper. Doomworks are finished really fast, which is not a good news for us people. With the game, also our world seizes to exist. Or maybe not? Find out for yourself!