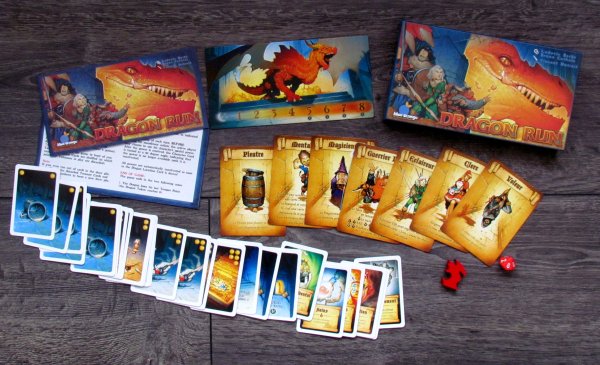 We are all too well aware of the risk. Treasure is never alone. Somewhere inside small corridors, hidden dragon will not want to easily give up his accumulated treasure. Next hour will examine our courage to the last drop. We will make it or start crying like a little baby facing jagged mouth?

Fleeing from dragon will bring together players in a card game Dragon Run. Its authors are Ludovic Barbe and his much more famous colleague Bruno Cathala (Cyclades, Abyss, Five Tribes). His latest feat was published in 2014 by Blue Orange Games. All images look great thanks to work of Vincent Dutrait.

Inside small oblong box with image of head in worthy of Smaug size and hero hiding, we find first of all rules in English. Along with them is also one game board depicting the awakening dragon lying on top. This is a fatigue scale, because whenever is such a dragon awakened from his deep sleep, he wants nothing more, than to go back to take a nap. So players should use every opportunity to calm it down. This is the main purpose of the range showing road from eight to a crescent moon. 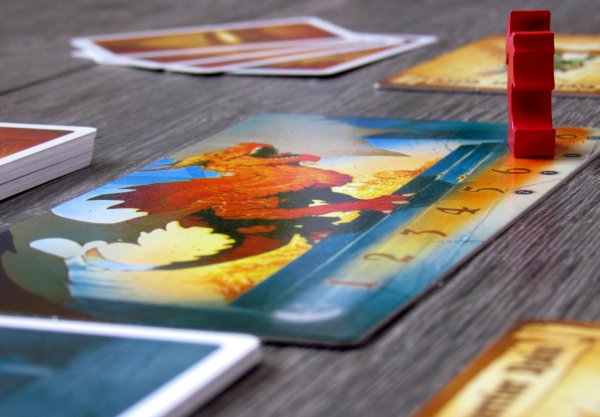 Individual heroes are represented by cardboard tiles. There are a total of seven and each has image together with description of ability. Since the game was originally not published in English localization, these lines are decorated in French. Fortunately, rules have a second sheet with translation attached.

Same applies to locations, which bring us to card section. In addition to rooms located in the cave, which force players to react, majority of deck is hidden in 48 cards of treasures. Regardless of the picture, value is indicated with a coin in the upper corners. Except for talismans and magic potions, which in turn have a text. Players will need only one tensided dice and wooden dragon figurine.

At the beginning of the game,awakened dragon figure is placed on starting place of sleep scale. Its location depends on number of players involved in a game. The fewer players there are, the easier it will be to put him back to sleep. All opponents choose (accidentally or by sympathy) one character and hero will also receive four random cards from a shuffled deck of treasures. Remaining cards create drawing pile on the table. 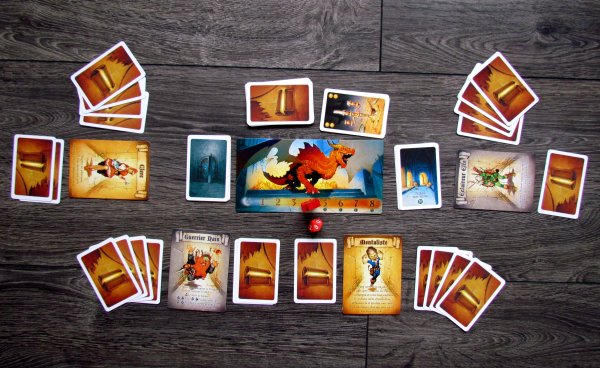 During his turn, hero always has a choice from three activities, all related to exploring caves. Hectic search for escape routes is the only thing, he can think about. Stolen treasures are already in his hand (cards), so now he just has to improvise his way out and avoid hot dragon breath.

Player can be courageous and heroicly explore forward, leading road also for others. It simply means revealing another card from location pile and evaluating its effect, because his character entered it first and has to take responsibility for everything inside. Place can meet both positive and negative events and this depends solely on luck – player can get a new treasure or face the dragon.

Not everyone, however, is so brave in the face of death. Many heroes simply collapse and refuse to move. Some even start crying like babies. That is name of another option, that is waiting for players. Using other heroes as human shields will cost players something. Specifically, treasures of total value of two coins, which they have to discard. 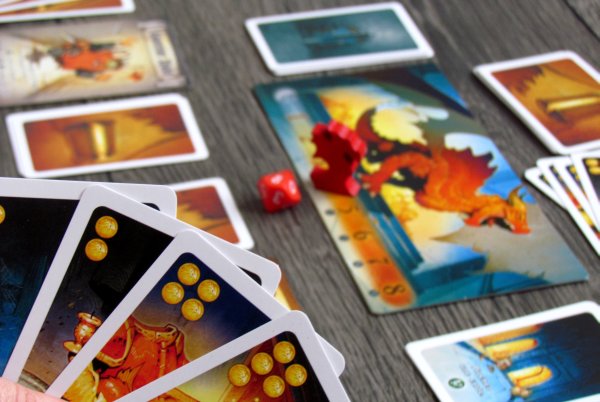 Only one coin will have to be payed by hero, if he chooses third option – prudent advance forward. As a consequence, he simply takes dice and tryies to sneak past the dragon. But he must roll a number higher, than number of cards remain in drawing location pile. This can not be done indefinitely, because all room cards are taken and shuffled back as a result of this event. Whole exploration can seemingly starting from scratch.

If nothing happens for a long time, dragon starts to fall asleep again. Therefore, if player succeeded creeping, he can lower dragon´s alertness on scale by one point. Conversely, unsuccessful cautionous advance leads to obligation to run headlong forward into the next room (reveal location card).

Special moment is exploration of a room, where dragon is currently located. That player immediately gets injured and as a sign of this, he has to turn his hero card to wounded side (figure has green skin as if it was ill). Dragon also (suprisingly) calms down as a result of such a meeting a little, because by spewing fire, he launched little steam. This is also second moment, when all the location cards are shuffled back as you never know, where he will be heading next. 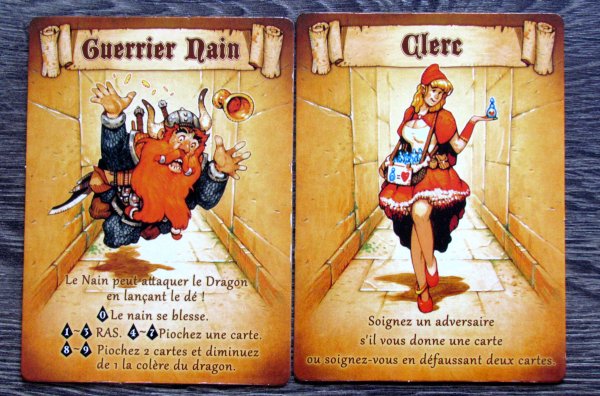 Cards are forcing players (with their symbol in lower part) either to immediately pass turn to next player in order or to lead group for one more consecutive round. So game continues, as players try to preserve as the most precious treasure in their hands, but at the same time run towards exit. Gold is finally, what is this all about. Once players manage to put dragon to sleep, player, who was able to keep most valuable objects in his pockets, wins. Dragon wins, if he manages to turn all the heroes to dust (hero dies, when he is hit by dragon fire for the second time).

And here it is again. Dragon Run is another game, that makes us go through dark dungeons and search for exit. This time, however, there is dangerous dragon on your heels. Players must be able to explore and take risks in the face of danger. Only in this way can they accrue additional treasures and be the most alive and wealthy hero of all. But there is also a significant risk, that when rushing through the dungeon looking for gold, they encounter a dragon.

Sometimes they must pay for being safe. And with those treasures, they already gathered and put their skin on the line. How well can players manage their previously accumulated wealth is the main difference in the end. 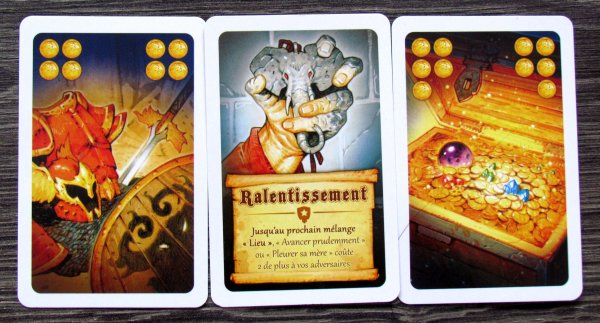 The most interesting element of gameplay is dragon falling asleep. He is the reason, why players must try to use action cleverly. They usually goes for their own throats and it does not matter to them, what happens to other. Game is so utterly uncompromising and filled with rivalry, allowing players to really compete until the very end.

This card game is very fast. It is also the only excuse for otherwise very randomly oriented gameplay. And this is also, why we can be a little more indulgent and tolerate fact, that not everything can be influenced. But much depends on the role, in which you go into the cave. Special skills of characters are not balanced, so thief is significantly stronger, than for example elf. Here probably a lot depends on what you expect from this small and quickly completed card game. Equal chance is not in stock here.

Dragon Run is essentially a really simple and random game, but it knows, how to entertain very well. And not just because of title dragon, but also thanks to pervasive need to move bar on your luck a little bit further. Dragon Run is not the best game and has balance issues, but it offers a nice fun.

Dragon Run is an expedition into interior of a cave. A dragon waits there, guarding its treasures. You should not wake it up and move forward, looking for exit. But while advancing, you have to take necessary risks. But caution is also sometimes useful, although you pay for it with your collected treasures. Otherwise, this is a random game, in which each card may mean meeting a dragon. This firebreathing monster is one of the main cribs together with nice processing. However, special skills of characters disturb balance as well as luck. Fortunately, it does not matter much, because when you are offered such a short game time, dragon and all the tenstion, Dragon Run´s fun has passed trial of fiery breath.