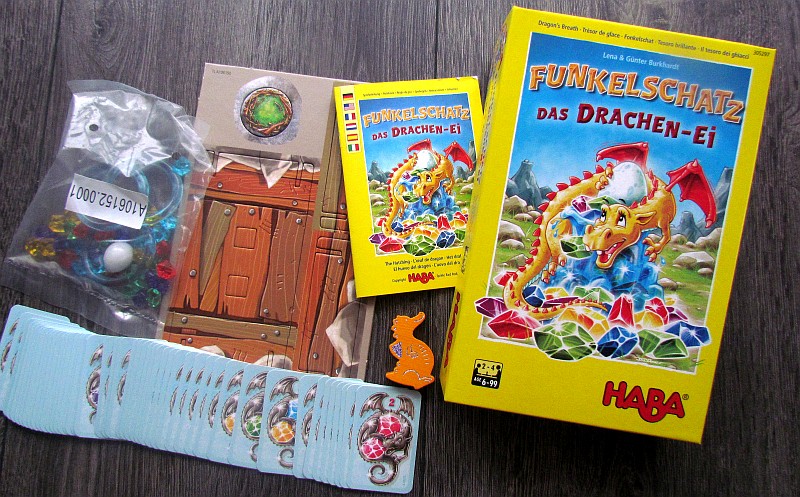 Legend has it that dragons give only one egg per year. And so they watch it very carefully. That is why this is the moment, when all thieves come to the nest and hope, that the dragoness would rather give up one of her diamond treasures, than leave her place, warming up her soon to be child.

Such thieves will be role for all players, but fortunately there is not so much danger and even the little dragon gets no harm, because the dragon mom will not spew fire. The menu is on the table thanks to author duo Lena and Günter Burkhardt and illustrator Daniel Döbner. Their game is released by HABA and was first enjoyed by players in 2019.

The novelty is hidden in a small yellow box, on whose lid lurks dragon mom, wrapped around egg, sitting on a pile of diamonds. There is a treasure chest waiting for players inside, which they must fold to create cardboard box, before the first game can start. The good news is that even in this state, it will fit back into the packaging and therefore does not need to be disassembled again. At the beginning of the game, however, we puts the chest aside, together with a wooden figurine of the dragon mom and a shuffled deck of amulet cards next to it. 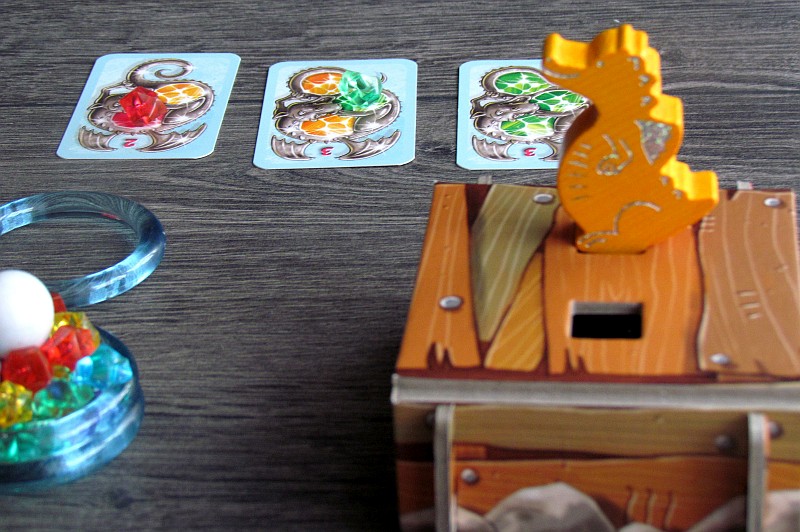 In the center of the table, players must have room to stack three light blue rings, which in the imagination of the participants are made of ice. Its bottom creates a round nest token. All precious stones are poured here and a white egg settles on their tip.

At the beginning of each round, players receive three amulet cards in their hands, which they place in front of them in a row face up. Only one of all participants will become a fire breather and will impersonate him for the whole first stage of the round. Here, his task is only to carefully put the upper ice ring to the side, so that the egg does not fall from its position. In this case, everything is fine and the game can continue. But if the egg has fallen, the dragon’s mom gets angry, puts it back in the pile (the player does) and then puts it in the hole in the treasure chest.

Afterwards, players can alternate in collecting gems, that have fallen on the table as a result of removing the ring. They try to fill the free space on their amulet cards, which always have prescribed some color. Even later, the stones can be rearranged, because some of the boxes have the color of a rainbow and can therefore hold a diamond of any color. 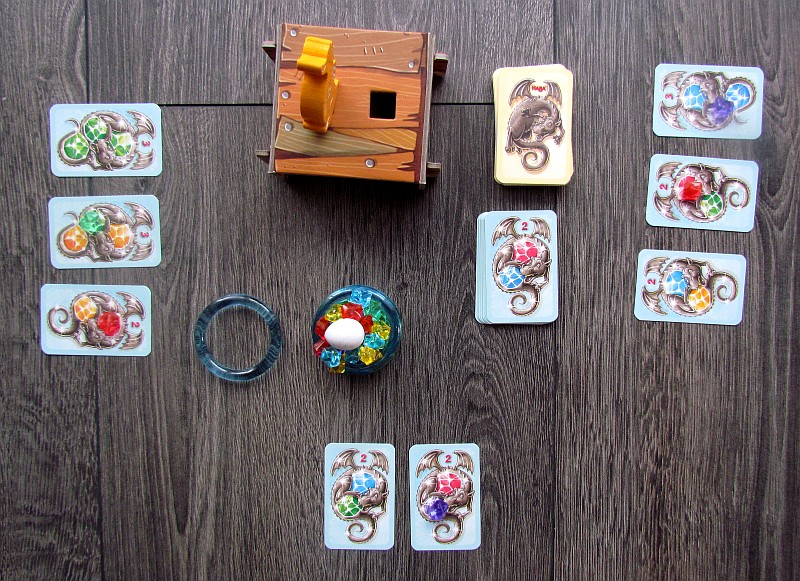 But these rules apply to all, but the fire breather. This player throws the chosen stones into the treasure chest instead. As soon as there is no diamond left to pick up from the table, the round ends and another circle needs to be removed. Only after removing the third ring and collecting all the colored glittering stones, the whole round ends.

Players can retain cards that have been successfully completed. If someone failed to complete the amulet card, he must return it with all the stones. Players empty the chest and restore everything to its original state. The new round begins with the deal of new cards and, above all, with changing fire breather role. As soon as all participants have been once in this role, then all that remains is to add up the points from all the accumulated amulets and the one who has the highest sum becomes the winner.

Dragon’s Breath: The Hatching is a family game, that builds on a two-year-old game. It shares the basics of the name with the novelty. The game is again dominated by the circles built on each other, which are holding shape on top of each other and can surprise, when the stones spill. 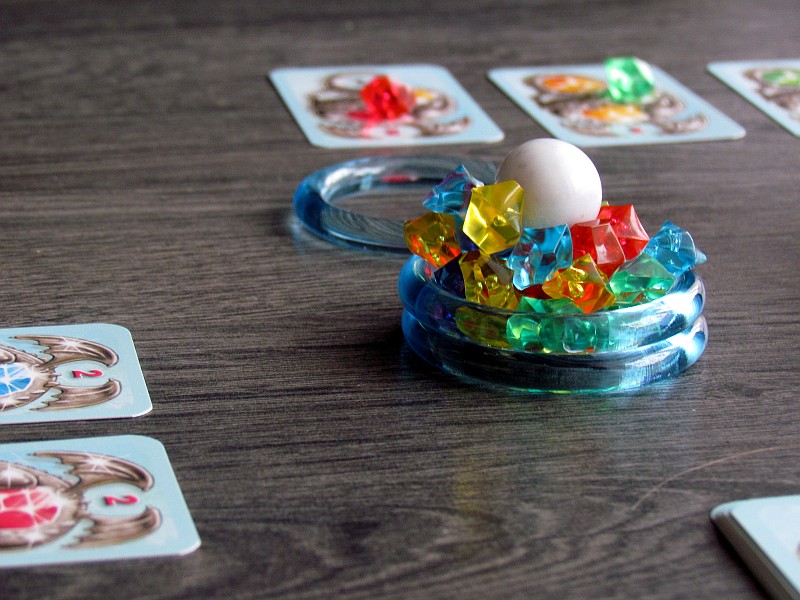 But the colors lying on the table are not yet a precondition for success. Players must be lucky and have the right amulet cards to put these stones on. Each position has clearly prescribed color, so there is a lot of luck involved. If there are multiple cards of the same suit in the game, then the offer will be quickly gone.

Players have to watch very carefully, who needs which colors and adapt their behavior to take those, which get most attention. The game is clearly focused on maintaining overview and mainly smaller players will have to show it. They are the most important audience, because the game is very simple in the end. 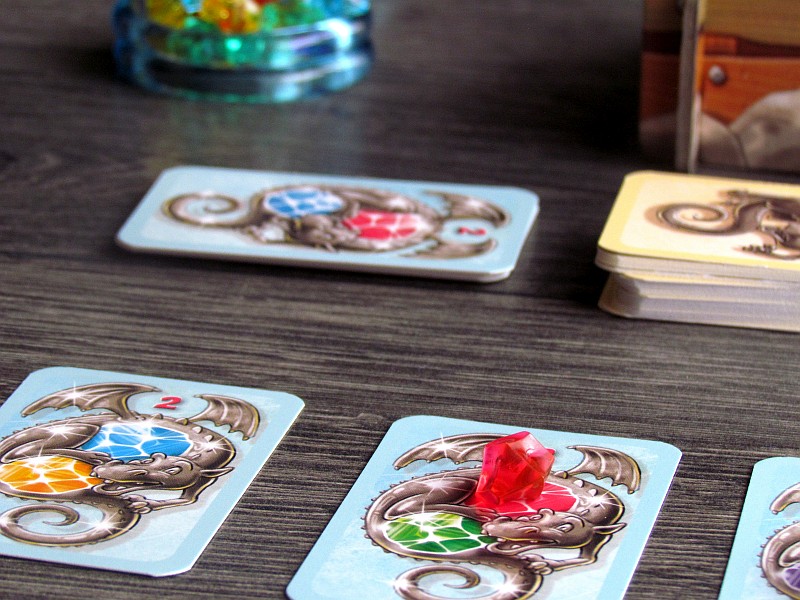 A completely different experience is a round, in which a player becomes a fire breather. In this round, he does not collect any stones or cards, but instead tries to harm others and take away the gems of colors, they need. In addition, removing the ring is also about skill, because the eggs must not fall. If this happens, the player loses his advantage and cannot remove such many stones from his opponent’s offer.

The game is extremely fast, because it has a clear number of rounds. In a lower number of participants, the battle is over even after fifteen minutes, with more players it takes only five minutes more. 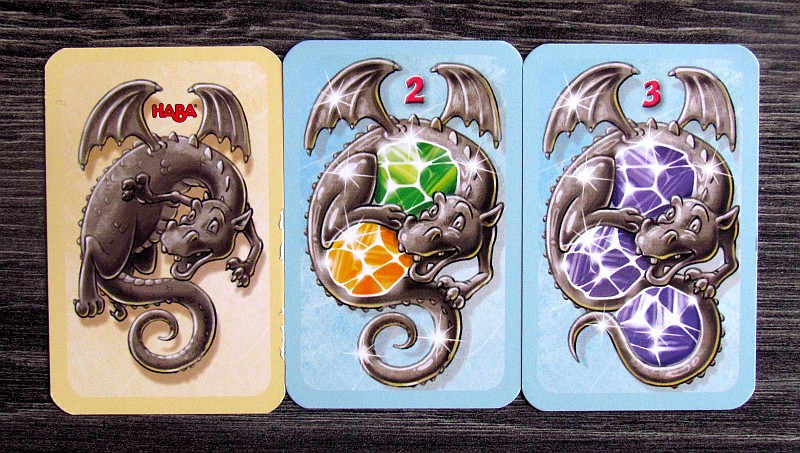 Dragon’s Breath: The Hatching is a random game, and it’s no surprise that it’s designed especially for kids. And with these, the manipulation with stones is a great success. Even more so, small players enjoy the opportunity to steal stones from their parents or opponents. Precious stones simply are fit for a family game. Dragon’s Breath: The Hatching is a bit different game, but again with precious stones.

- chance
- conflict is not for everyone