2
new
Review: Magic Cauldron – brewing yourself a potion
Review: Orléans Stories – from the diary of the kingdom 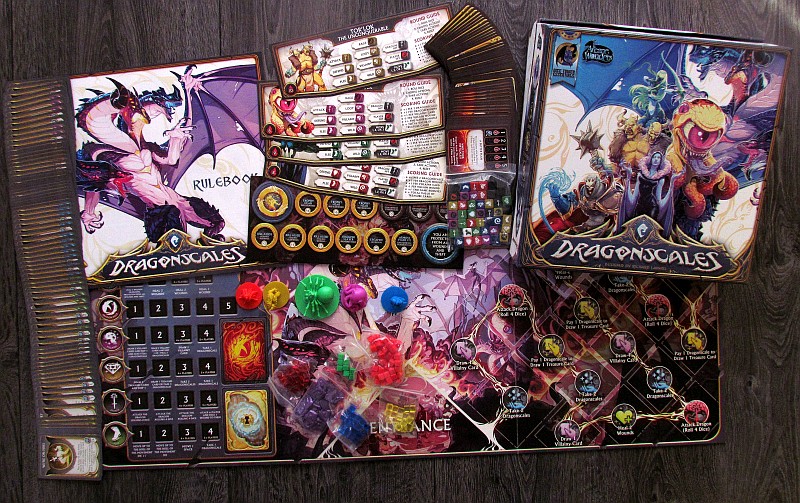 If an unsuspecting tourist came here, he would have thought, it was just an ordinary cave. No indication, that there is some king of a bloodthirsty sleigh, that has taken hundreds, maybe thousands, of lives. Foolish or courageous ones. It does not matter. They are all dead now, and their bones lie at the bottom of the abyss. Maybe another group will join them soon. But they are not like the others. They are not heroes, but instead villains. Maybe that’s the way to defeat Archerex.

There’s another story about a treasure hunt and a huge room full of gold. The game is called Dragonscales and was created by world-famous game designer Richard Launius (Pandemic). We are able to forgive him the generic theme, especially when the game is released under the auspices of Arcane Wonders (Mage Wars). The game was released just a few weeks ago and is being brought to the European tables through the distribution of Esdevium Games. 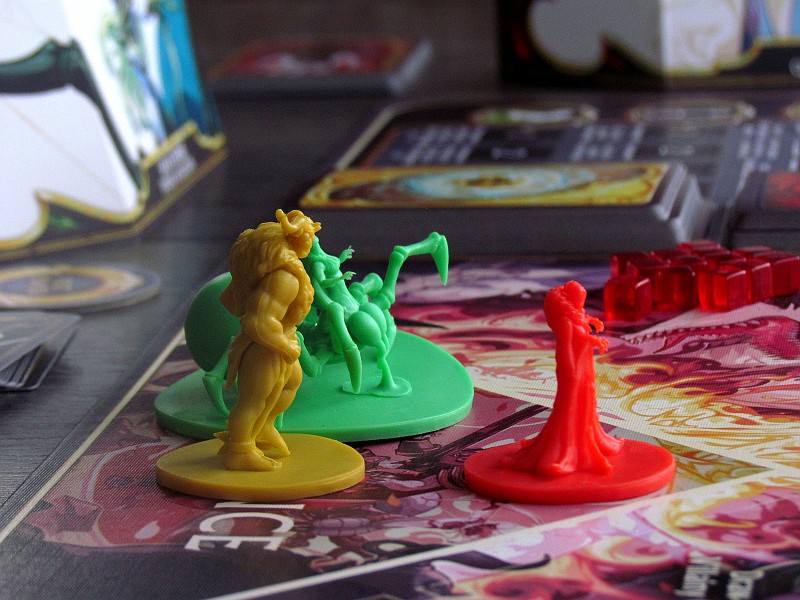 On the lid of a large square box, players see a lot of strange creatures, behind them, somewhere in the background, stands a three-headed dragon. Inside they will find a large, elongated game board, folded in thirds. On its surface, there is a view into the dragon’s cave, but also action fields, a place for cards (shuffled decks of dragon’s rage and treasures) and the dragon itself, more precisely his three heads. It is these sleigh necks, that are equipped now with cubes. Their number depends on the number of participants and marks number of lives of each head.

Each player chooses one bad guy, he will be cheering for. He puts his screen in front of him, while placing the figure on the starting field of the dragon’s lair. Everyone also gets a set of dice, three dragon scales, and above all his action deck, which he shuffles and takes three top cards into his hand. The remaining dice and tokens create a supply next to the board. 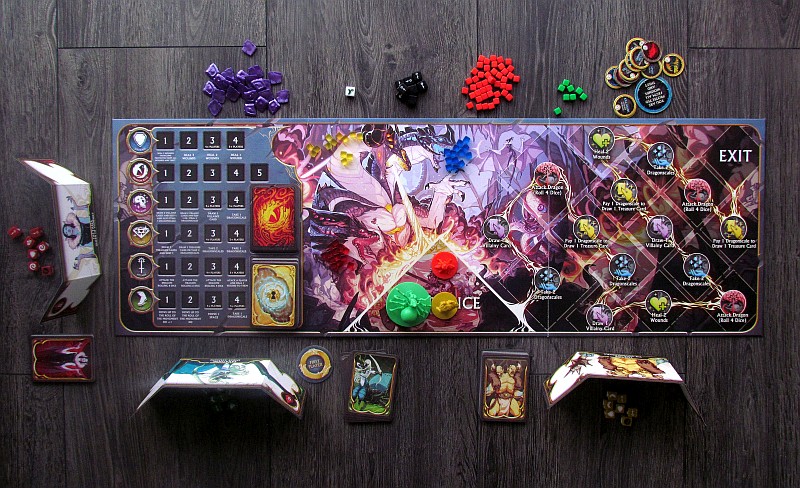 Players advance in every round together through four phases. Right from the start, everyone takes his seven dice into his hand, rolls it, and watches out, which of the six symbols fall on them. But all this takes place behind a screen, where others cannot see. In doing so, they can swap up any combination of dice up to twice to get the best combination. At the same time, it is forbidden to re-roll the dragon’s rage symbols. They remain there to give players headache. At this time, players can also modify the results on the dice with the help of cards in hand.

The resulting dice icons are used immediately by players and they fill the action area with them. Each type of action has its own corresponding line, in which the opponents rank according to the principle: first come, first serve. But at the same time, they can push an enemy group of dice and move them to the right, but only if the new player is placing a larger number of dice with that particular icon. In this case, all other dice are moved to the right, falling to the less advantageous places. 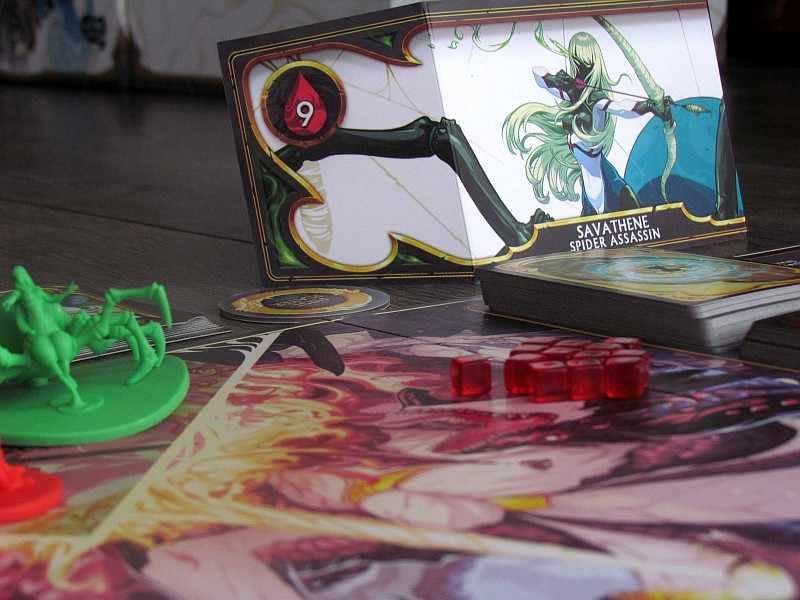 Only when all dice are used, evaluation phase starts, going from top to bottom and from left to right. Each box has a printed instructions, that players will follow. Right at the start of the round, they will heal with the help of a defensive action, but immediately afterwards, they must face the dragon’s wrath. In upcoming part of the turn, one of the participants turns the upper dragon malice card and shows it to everyone. This card will prescribe, what will happen to the bad guys, who have awakened the dragon (rolled dragon’s rage). Usually this means some injury, that is specified for each position in the action line, but also some possible reward (such as a card or dragon scale).

In addition, players will receive malevolence cards, scales, or treasures depending on the fields chosen with dice. Each row has its own specific focus, but that does not mean, that some of its fields cannot bring other profits.

The main task, however, is the chance to attack the dragon. Depending on the position of the dice, the player receives set of dice to roll. He has a chance to re-roll again, but he has to be careful. Each icon of rage immediately means another injury as dragon strikes back. For each rolled sword, however, the player credits the hit and can take some life cubes from any dragon’s head. Successful attacker hides the cubes behind his screen. 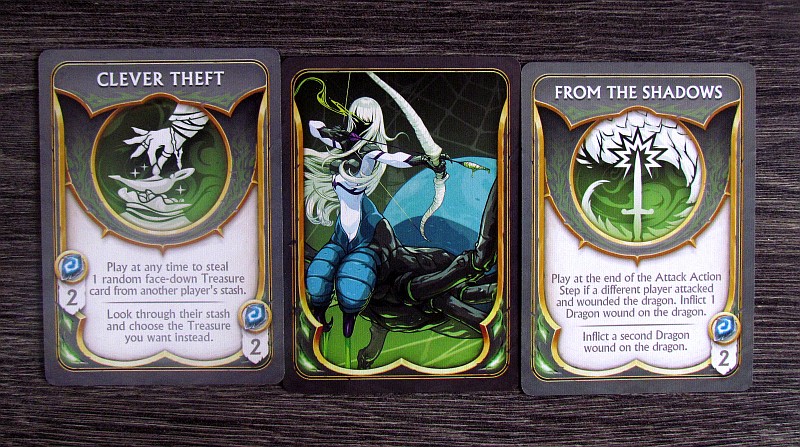 Sooner or later, some player will be happy with their achievement and move towards escape. He can use the last, sixth icon to do this. The move on the plan is controlled by the dice, which prescribes the character’s speed. The spaces on the board again offer their special abilities, which are activated, when the figure stops on them. With the escape, it is necessary to hurry, because if the hero loses the last point of life, he is eliminated from the game. But even dead hero will also sum up victory points at the end of the game, so he is not yet completely out of battle for triumph.

All players then take back their used dice and the situation repeats again. The game continues until either the dragon is killed (all three heads lie on the ground), one of the heroes escapes from the labyrinth or the dragon has managed to kill all the bad guys. Players get points for head trophies, damage dealt to dragon, cards, scales and treasures. But they will deduct their own injuries from all this. Only the result can then be compared and identifies one notorious villain, who will be celebrated by everyone! 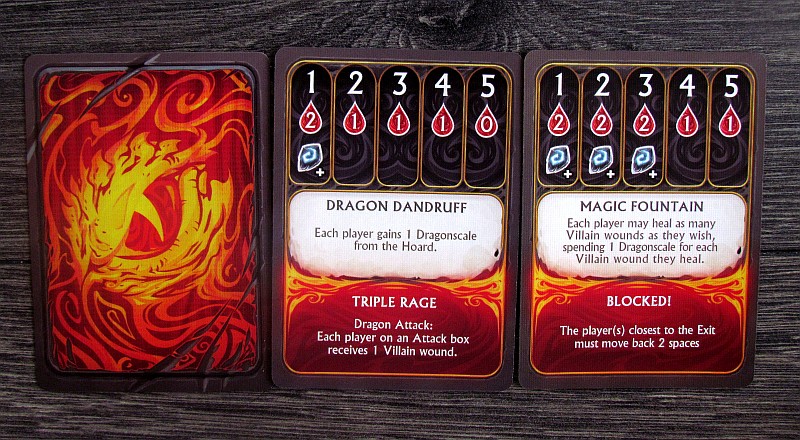 Dragonscales is quite a unique game, but in the middle, there are dice and their management. Their choice for the main mechanism is great. Players have to consider very well, whether they will risk rerolls and with it a great chance of dragon’s retaliation or will try to adjust their tactics according to the icons, that they have.

Indeed, the number of identical symbols on the dice is the only thing, that can ensure a better position on the line. This is noticeable mainly in more players, but in general, the fields to the right are unlocked only in higher numbers. However, the difference is really visible, as individual rows are rarely left empty in a higher number of participants.

Dragon Scales have two roles in this game – they not only function as finances, but can also earn victory points. So it is up to the players, how to spend them and if they keep them till the end. Moreover, the loss of one of the dragon’s heads enrages the dragon. This influences the rage cards, which have increased effect and give players a hard time. 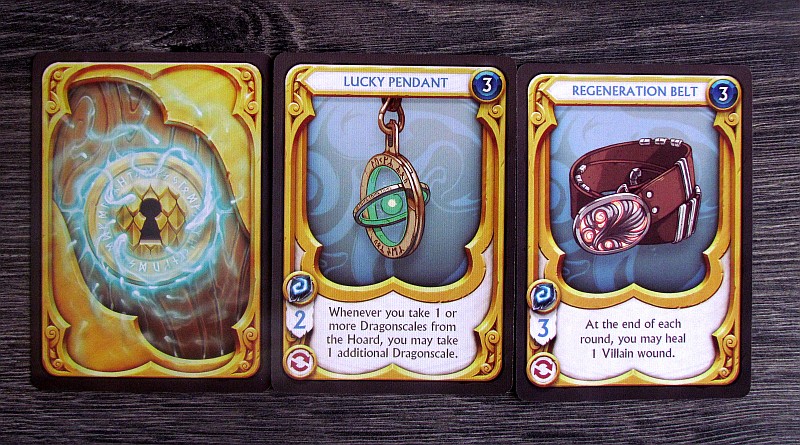 The game is surprisingly quite soaked with a real theme and it is not just about rolling dice as it might look according to the rules description. Players can influence each other significantly by pushing out, but in the end, it is all about deciding, whether to kill a dragon or flee. Everyone can decide for themselves, because ultimately the winner will choose the sum of points from various sources. The place for sabotage is really a pile, but yet everyone must at least to some extent cooperate.

The strength of the action depends on how much the player is willing to invest the dice, placing them in one row and thus in one particular action. This gives everyone a very enjoyable freedom. At the same time, the game is not very tactical, so we recommend it especially to players, who like atmospheric fights and prefer them instead of calculable experiences. 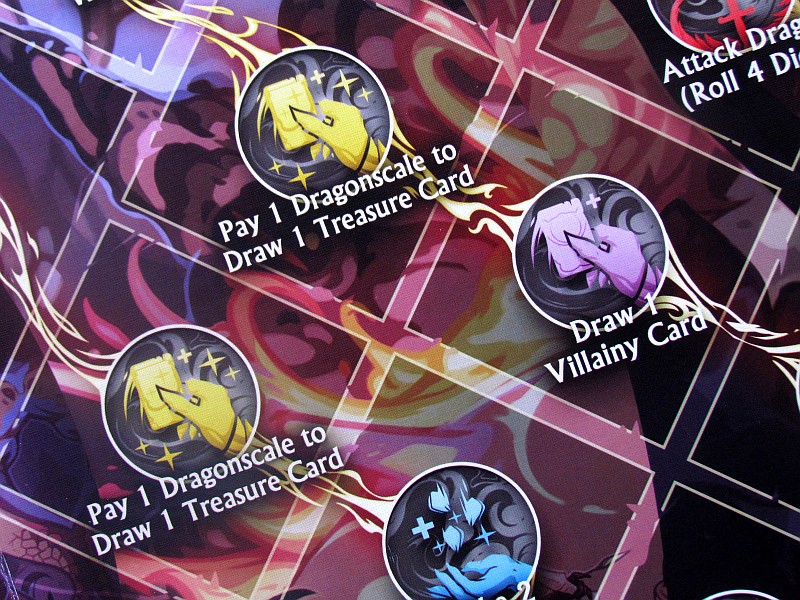 When using the action, it does not depend on the number of dice, that the player places on the square. Instead, their number directly affects the order, in which a participant gets to action. The opponents are sticking out gradually, if they have the appropriate dice. Correct timing and estimation are central to all gameplay.

Each character has different abilities, which means not only a feeling of uniqueness, but also a significant replayability. But it is also given by an overall character of the game and for some ten matches, we did not get tired of it at all, although playing rather regularly. Despite the aforementioned influence of the number of players, the game remains (thanks to blocked spaces) fun even in three. 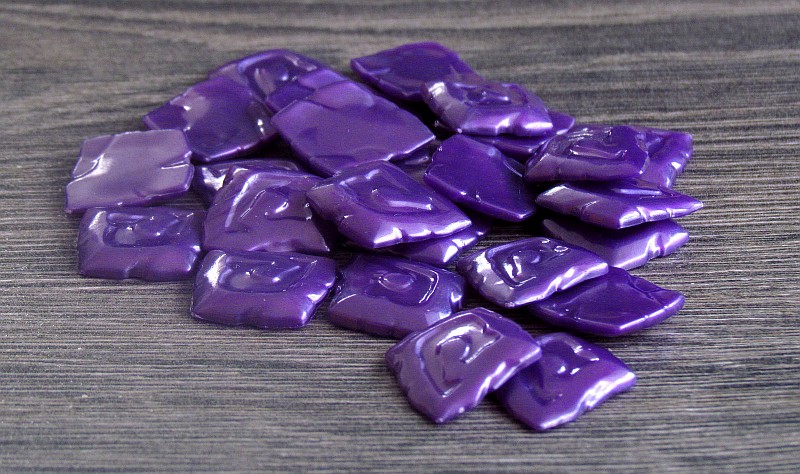 The game has beautiful processing, that is dominated by illustrations and dice. It all looks really colorful and the game will get enough attention from all involved. The game plan may be a bit unclear, but it’s just a matter of first moments.

Dragonscales offers a great experience with dice and collaboration, although game in fact is not about working together in later phases. But we like the atmosphere the most, because the dragon’s lair is approachable by two possible tactics. And cutting off all his heads is just one of them. Dragonscales is a game full of marauding, suspense and fun.

- will not satisfy tactical players

by Dušan on 06. 01. 2020
The White Witch was defeated. But this is just the beginning of our struggle. It is necessary to build a kingdom again, but it cannot be done without [...]
comments
Leave a reply