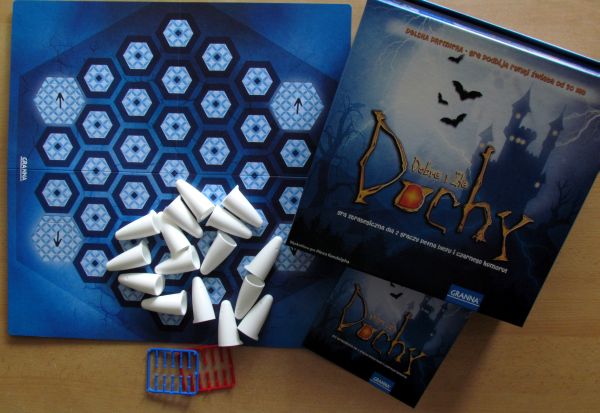 They haunt me every night. I hardly cross a room without seeing them, hiding everywhere, emerging from different places. One is crawling from a drawer, and the other day a dogshaped jumped on me from beneath the lamp. Yesterday was day, when I pulled one out from under the bed, while the second entered the room through the window. I’m not afraid of them.

They’re such quiet , these friends of mine. Ghosts are my friends. That sounds nice, I say to myself, when I close my eyes and a milky transparent little body is hovering above me, only few inches away. I sleep knowing I am safe, because everyone, who would come in, would become scared and runs away. Their intention is actually to protect me, in some way. But that was my last thought, before I took off into the realm of sleep and dreaming.

Duchy is a Polish word for spirits and its also a name for this game. It was released by a Polish company Granna in their typical high box for larger and more complex games. This time, it is not an original idea, as in other cases. Instead, these ghosts are only hit remake of a much older game Ghosts! dating back to 1980 and originally created by Alex Randolph. The game is available in English only in older Milton Bradley variant. In year 2012, polish version comes out along with Italian Fantasmi and french Fantômes contre Fantômes. 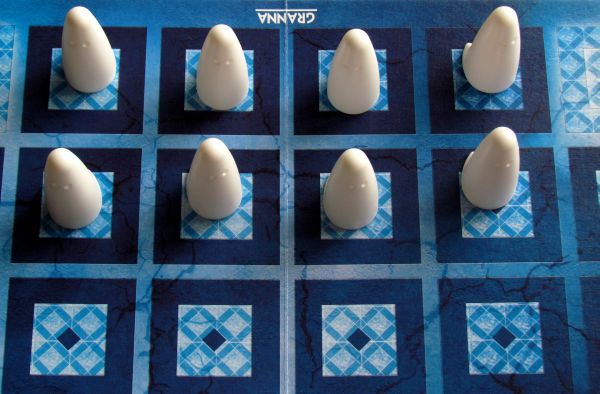 Big box welcomes you as well as for in Superfarmer (review), Loch Ness (review) or Qubix (Czech review). On the lid, there is a castle with bats flying in the air suggesting, that children should be a little afraid. But only until they open the box. Ghosts are your buddies in this game.

This time most of inner space is empty. Part of it is occupied by plastic figures of white spirits. There is a total sixteen of them. At the front, there are two small nondescript eyes and behind, that spirit pulls his white linen on the ground. Ghost has a small hole on his back, which will serve to distinguish good and bad spirits apart.

Yes, this is basic division of spirits, which is taught in every good ghost academy. And now you get to know it too. The ghosts fall into two families – one is trying to help and protect you from bad dreams and things not from this world, while the other is mischievous and likes to harm people. So when you meet a ghost, first look at his back. If there’s a blue dot, it is safe to play with him. But you should be aware of those with a red dot! 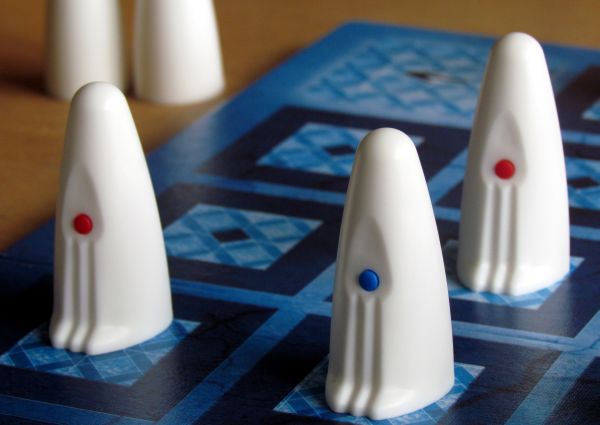 You are able to divide them in a game, using two plastic combs filled with plastic dots. You have to cut them out and get those little pins. Ten red and ten blue. You then simply insert them into the little hole on spirit backs in a way, that you have eight blue and eight red of them. You will keep those two remaining pins as a replacement reserve, if you accidentally lost those used.

Beside these pieces, it’s only double-sided game board in the box and of course one booklet with the rules two pages long. These are only in Polish, which we fortunately do not mind, because there are rules available in the English language on the Internet, although they come to previous versions of the game. Each player is able to quickly learn it, since it has no complicated rules and only few those simple ones.

It is important to really look at the game board. On one side, it has many square shapes on it, while on the opposite side, it is filled with hexagons. For beginners, who are not familiar with the game, rules recommend to start on the plainer side. 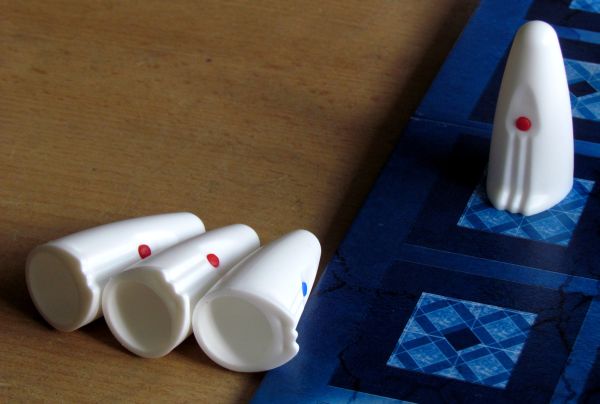 All four corners of board are occupies by an arrow. You should rotate game plan in a way, that they are always facing to the left and right from the perspective of the players. These places are escape paths from the house. Good spirits are afraid because of the bad, try to free themselves and escape from the house to safety.

Each player gets four good and four bad spirits to his possession. He spreads them in two parallel rows by four. He rotates them, so that they are pointing with their dots towards him and his opponent does not have a clue about identity of each one of them. He does not know, which are good spirit and which are evil. This means, that you have to spread ghosts randomly and tactically at the same time. And now we will show you, how to actually play a game of Duchy.

The whole game is full of ghosts running around in bedsheets according to common movement rules – one to each world side is an option. And then there is capturing. When two ghosts meet in one location, then the defender (ghost, who was already there) is captured. He gets startled by a surprising visit and shrinks into pellets – the shape, in which the normal ghosts are hiding from danger. 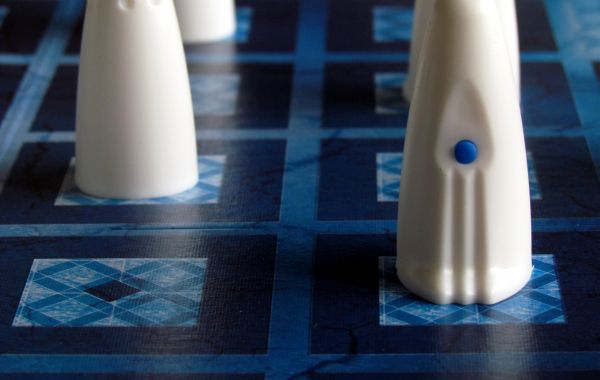 As we have already said, a player may move one of his pieces forward, backward or sideways in his turn. Over time, two groups of ghosts have to meet and begin to compete. And while running around the board, one could slip unnoticed and runaway. However, each player can only escape throug passage, which is on the opposing side of the board.

At the moment of capturing a ghost, both players reveal the identity. Each player puts his spirit in front of him. He has to show his rival, whether it is good or bad member of the tribe.

Battle can end in several ways. The first one was already mentioned – if one good ghost manages to escape from the house, without any opponent ghosts catching him, the game ends with victory for the owner of this fugitive. 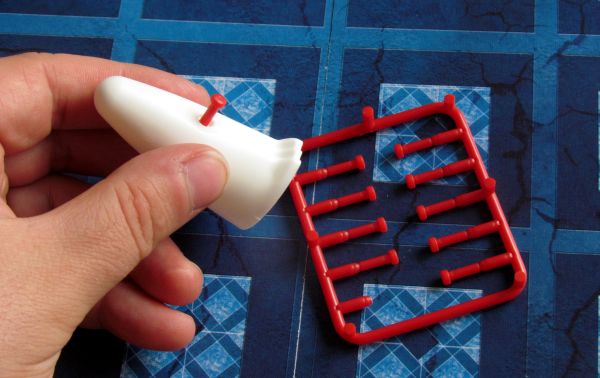 Two other ways to victory or losing involve capturing opponent’s spirits. If a player loses all of his four good spirits, then he immediately loses. However, on the contrary, he may win, if he is able to slip all four evil spirits as a prey to his competition. In such a situation, the owner of the remaining good spirits wins the game.

Duchy are a simple fun, which has only a little tactics inside and above all a lot of secrets in the shape of dots on the ghosts back. Obviously, this is not a new idea. We already got used to it in several other games – one is internationally known as Stratego, the other is specific to Czech market.

This version, however, has an interesting theme and really original and hilarious processing. That is the most attractive chord for the target group of this game – smaller children. Those will have fun with Duchy, no question about it, because they would not mind at all, that most parts of the game is not affected by strategy, but luck. 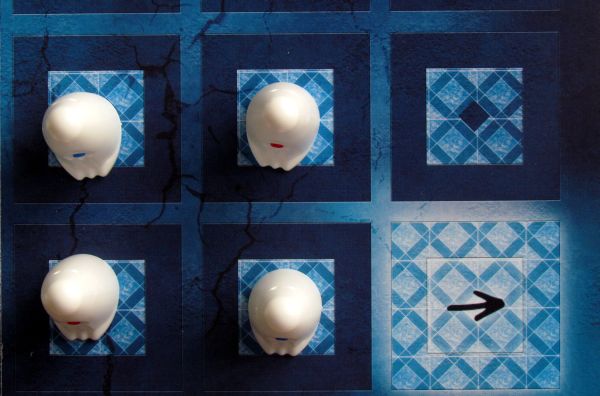 Chance is involved especially at the beginning of the game, because you have no chance to find out, where the opponent has which spirits. So you have to take risks. However, unlike the above mentioned games, this time you are not risking defeat, when attacking the wrong spirit. You capture him anyways and weaken your opponent. You just need to be careful not to capture the last bad spirit. By that time, you should be able to reveal his identity, you can keep an eye on him and avoid that encounter.

That is, where the fundamental difference is located compared to other games of same type. Those contain a lot of different units, with different strength, which trumps each other in the rock-scissors-paper way. Spirits in this game are a little different. And its more tactical in the second half of the match.

Simpler rules and only two kinds of figures have resulted in a rapid game progress. And the kids will want a rematch as soon as the game ends. Mystery is a good choice for such games, because while it is great fun, it brings also tension, whenever attacking players. You are curious about what spirit have you captured. Moreover, it is a great idea to add a third victory conditions in the form of escape. Players must be careful not to let some piece slip by unattacked, and they can not just avoid each other. And it is good, because it also reduces the game time. 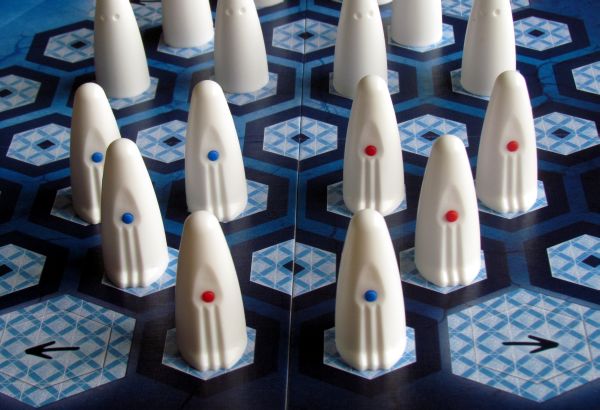 And the second version on the other side of the board? Hexes offer more options for movement and a longer game. Unfortunately, the rules do not show the correct distribution of ghosts on board. The only picture of this other hexagonal side, which can be found in the rules, does not contain ghosts. But you can deploy regular eight spirits in one way with an empty space in the middle. The gameplay in this version is slightly different again and still remains interesting.

The rules also suggest for a more strategic experience to lower number of ghosts in one game. But then you may come across endless chasing after a relatively large area of the house. This way, escapes will be much more often.

Ghosts is a nice game for kids, who will enjoy it, because of its nice processing. Secret information on the back of each piece is going to fascinate them. In addition, there is more strategy, than in the original versions of the games. So if you come across this Polish version of this game and want to entertain your kids with ghost chase, then do not worry and buy it. Ghosts will not haunt you for it. You will hunt them..

Duchy is a simple, basically children game, about good versus evil fight. Every player has both good and evil ghosts in his team at the beginning. His task is to either run away with one of the good guys or to force an enemy to capture all his evil spirits. Ghosts attack each other and make the defender into prisoner. But when you attack ghost, you never know, if it is good or bad. It has no influence on the attack outcome, but you can lose a battle, if you capture last evil ghost of an enemy. This makes game tense, but also a lot random. You would not be able to find figure positions for hex side of the board and on larger space, there is also bigger chance for ghosts to run and chase each other. This could be solved with other victory condition, escaping with a good ghost. Duchy will catch your children eye with interesting processing and simplicity..