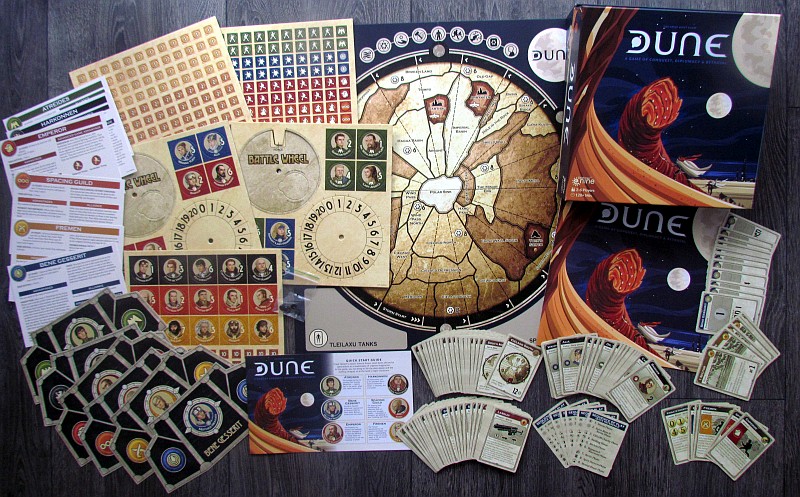 A beginning is a very delicate time. Know then, that is is the year 10191. The known universe is ruled by the Padishah Emperor Shaddam the Fourth. The spice exists on only one planet in the entire universe. A desolate, dry planet with vast deserts. Hidden away within the rocks of these deserts are a people known as the Fremen, who have long held a prophecy that a man would come, a messiah, who would lead them to true freedom. The planet is Arrakis, also known as Dune.

We borrowed part of the prologue from the original David Lynch Dune movie, which brought the legendary sci-fi to the big screen for the first time. And it was in similar years, that the history of board games from the same world of Frank Herbert’s novels started to be written. The incredible 40 years since the launch of the original version by Avalon Hill (from the minds of designers Bill Eberle, Jack Kittredge and Peter Olotka), the players have seen a new edition produced by Gale Force Nine. The original authors, still joined by Greg Olotka, are still signed under the game. And Esdevium Games is in charge of distribution through Europe. 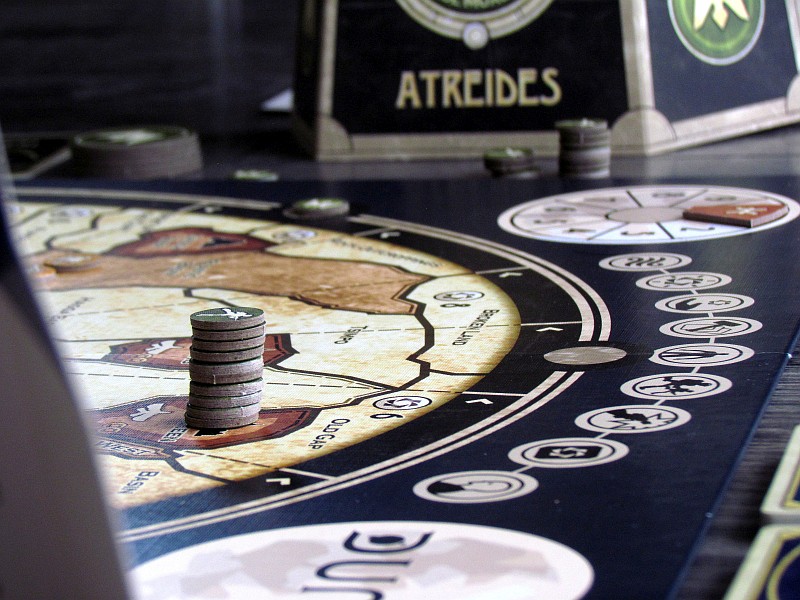 On the lid of a relatively small box, the original version of which is entwined with legends, we can come across nothing else, but the iconic sandworm. The first focus inside is on a game board, that shows a map of the planet divided into areas of rocks, sand, but also cities and places, where players will find a fortress or a polar tip. The individual territories are separated, but the globe is also divided by longitude lines.

Players have a choice of six factions from which they can choose their favorite. In addition to the classic Atreides, Harkonnens and Fremen, there is also the emperor’s army, Space Guild and also the Bene Gesserit sisterhood. Everyone chooses their role and gets units, screen and pointer, which they place on the circle on the perimeter of the plan. Everyone receives four cards from the betrayal deck, from which they can choose one character. The opponents then place their units on the plan according to the instructions of the screen, behind which they hide the starting property of the spice and also one card of the bank. 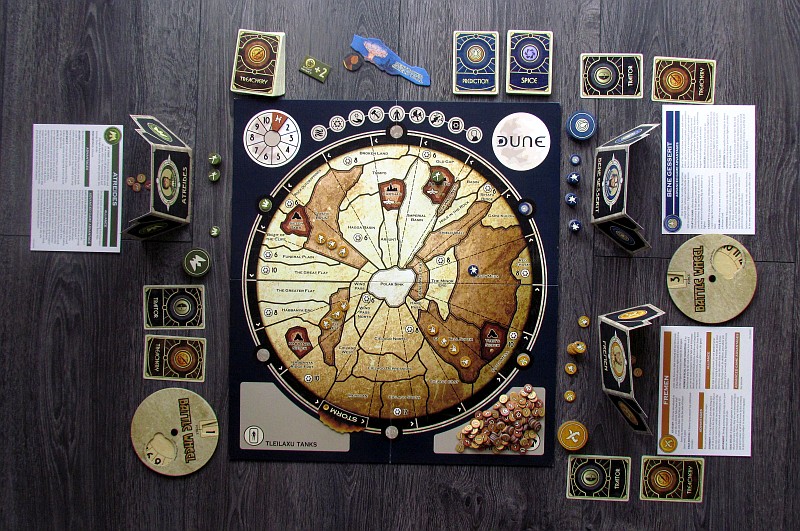 Together, all houses go through the rounds and their sequence of phases. It always starts with determining the first player decided by the storm indicator. How many positions will be moved? That decision is made by the players themselves, with the help of rotating battle tiles, which can be used to select values in secret. Immediately afterwards, a new supply of spice will appear on the map in some areas, according to the revealed card. A sandworm, the so-called Shai-Hulud, as the locals call it, may also appear as part of this. When it is discovered, individual factions have a chance to form alliances, which can even be kept to win together the whole game.

Then the players start interfering with the events. First, they fight for treasure cards in the auction, but they must continue to comply with the limit of a maximum of four cards of this type in their hand (or behind the screen). Subsequently, they can gain new reinforcements. 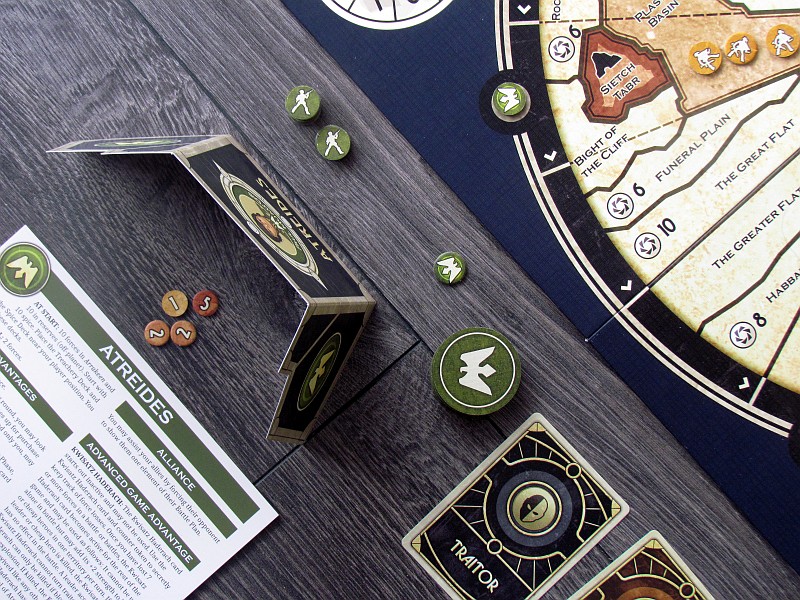 And then the whole turn culminates on a map, where units can be deployed from ships sent from space, while those already there will be moving through the desert. Everything (including recruitment) is paid for by spice. However, units must not enter or leave the sector, that is hit by the storm from the beginning of the turn.

The moves are followed by their logical outcome, the battles. These occur, when units of multiple players are in the same territory. Players choose any number of units on their turntable, they are willing to sacrifice, which can range between zero and the number of units available to them at the location, where the fight is taking place. These units will die in battle. They can amplify their power with the use of leaders as well as treasury cards. The player, whose sum is higher (or the aggressor in case of a draw), becomes the winner. The loser removes all units, no matter how many he sacrificed on the disk. Other player loses only those, that he chose. 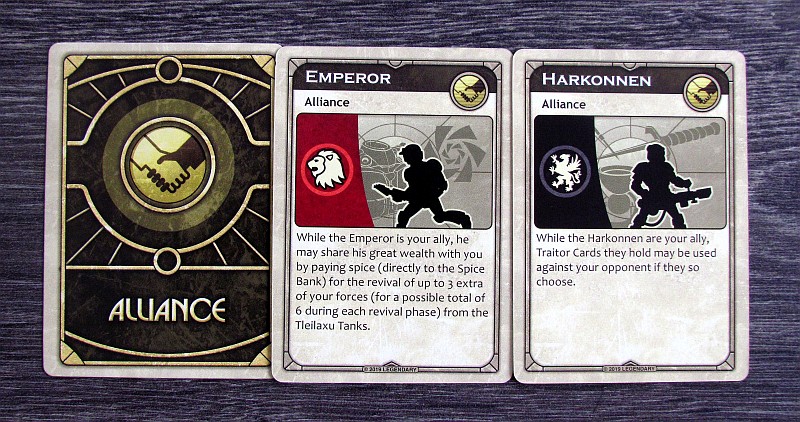 The reason for the fight is, of course, mainly spice. It is located on the locations and players can pick it up at the end of the round, if they have their army there. The game thus continues with a maximum number of ten rounds, while at the end of each (in the so-called mentat phase), it is necessary to evaluate, whether any of the houses (or alliances) does not have the required number of forts under control. If so, such player(s) immediately celebrate victory.

Dune is a game, that exudes atmosphere in all directions and pays homage to its design. If you like Frank Herbert’s book, then look no further. Go get this news, because its stories are exactly the retelling of the world of Dune, that it deserves.

The spices must flow. Exactly as the princess stated at the beginning of the film, the mysterious substance is the basis of everything. Players need it to build a proper army, so that they can start fighting for territory. In doing so, they have to take into account the randomly moving storm, which can affect the plans, but also randomly decide on the first player of the round. 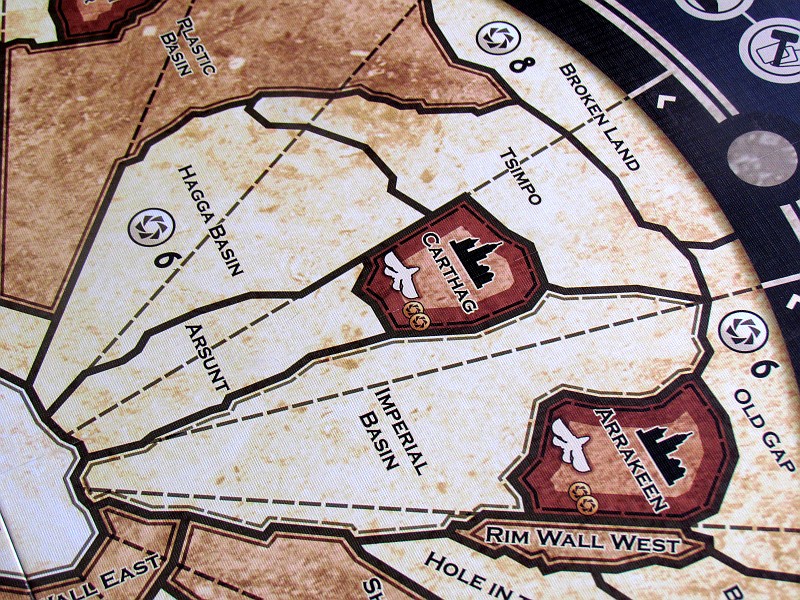 To win, you need to have more fortresses your under control, but at the same time, it is clear that others will be interested in them as well. So the forces are spilling over there and back, and space support, which must also be paid for, also makes a significant contribution.

The basis of success in the fighting is not only the correct mobilization of the army, but also an overview of what cards each of the opponents has. These are purchased from the public offer, so it is certainly not a problem to remember the possibilities of opponents for the next rounds. And that can be a very important advantage. Choice is then everything, that matters.

The game is surprisingly simple in terms of rules, but at the same time it is full of just such inconspicuous choices and decisions. Apparently not much is happening in it, but the players go through the individual phases together and thanks to that, they always have a clear overview of what is happening on the map. 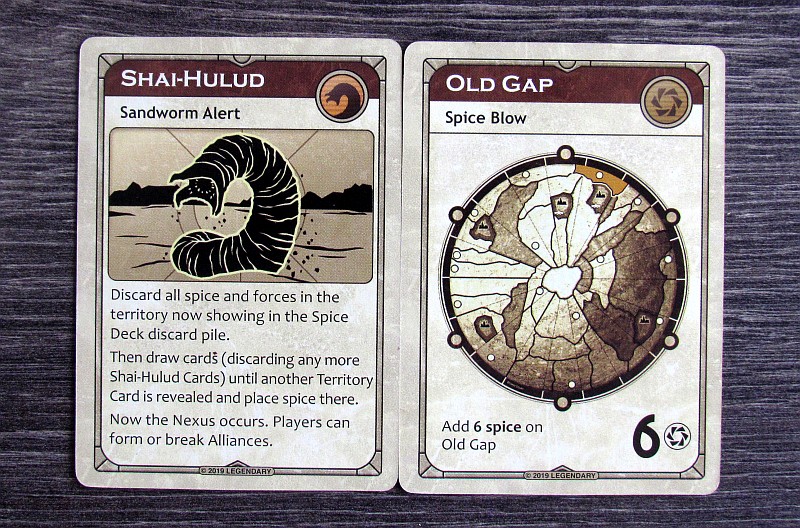 But we only described the basic game. In that advanced variant, more emphasis is placed on spice and its effects. Not only does it appears more on the map, but above all, players can use it to support their troops.

The individual houses are each completely different. It is this asymmetry and the balance between the Harkonnens’ brutal power, the ability to predict the future of the Bene Gesserit witches, and the Fremen’s home advantage, you will live with your new family and want to stay in there to have more fun. And the path to success is not only the right choice of house, but also the right choice of ally. 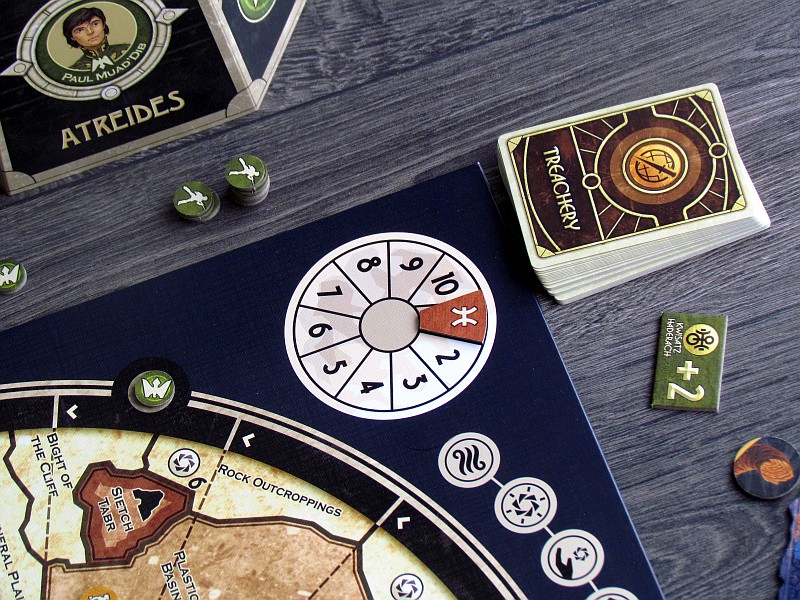 In order for the experience to be full-fledged, it requires not only enough time (games are really long), but above all a higher number of players. You can read number two on the box regarding to players, but if there are not at least four opponents in the game (preferably six), you will not get the necessary alliances, which are just the political condition for the maximum experience. On the other hand, these numbers also mean, that you should set aside the whole evening for the game, ideally around four hours. It sounds scary, but it will surprise you all the more, how this time passes in planning and tension.

This is a faithful elaboration of the original version, the age of which we have already talked about. The changes are only cosmetic, if we do not count the processing. It has acquired a new coat of arms, including rules that are implemented more as basics. In their second part, each of the houses and its specifics and advantages are described in detail. 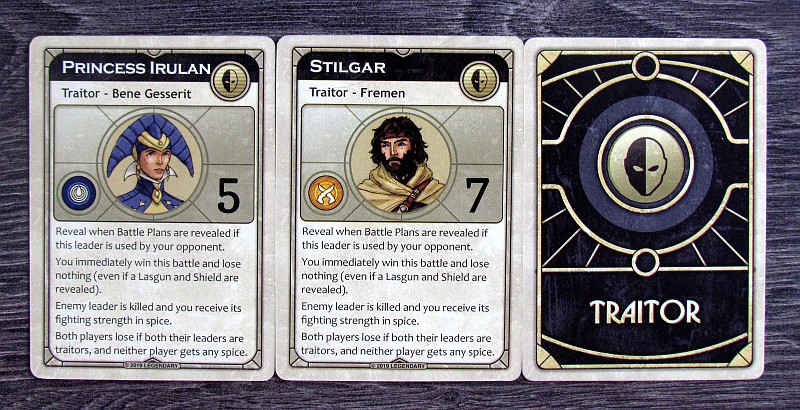 Dune is a game, that has long been a legend. And so its reworking into a new form will arouse a lot of joy. Critics will, of course, mention that this is an old concept and that games are different today. But the politics and the tremendous power of the book story gives it wings, that distract from a long playing time and only an above-average combat system. What’s more, the novelty comes at the right time possible, because this year the theme will (perhaps) have a new life thanks to Dennis Villeneuve movie. Until then, however, we have a game, that will allow us to visit the sandy planet just as perfectly. Dune is a famous gourmet game.

Dune is an invitation to a world full of traitors and battles. In reality, we would probably refuse a ticket to Arrakis with thanks (we like to keep our water), but if we want to look there somehow at least in imagination, then there is no better option, than this game. If you are a fan of Dune, you probably already know the original game (long out of print, but with many custom reworks) and you own it. In attempt to buy, you may be discouraged only by the length of the game or the required number of players, because otherwise the battle for territory is exactly what you could wish for. Exciting, atmospheric and magnificent. Dune gives you a choice of all known factions and it is up to you who will eventually gain dominance over the most valuable planet in the entire known universe. Dune.