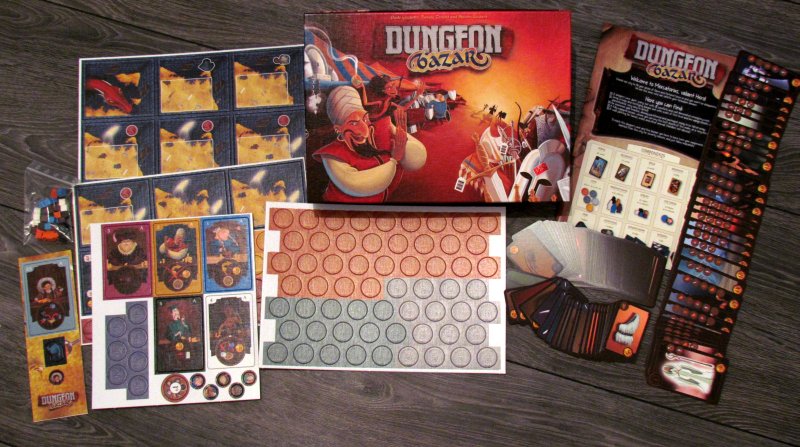 Does it seem crazy to think, that inside the dungeon, you can visit a shop? Yes, it does. And others thought so as well. That is, why heroes usually come to mission ready and armed to their teeth. But the resourceful businessmen felt their chance and settled in many corners of the damp underground passages. In addition to earnings, they are also risking losing their lives, but prospect of money is simply more attractive, than self-preservation.

Box titled Dungeon Bazaar is literally full of such madmen selling their stuff. Including those, who gather around and seek entertainment. Its authors are Jaoui Paolo Cecchetto, Daniele Tascini and Simone Luciani, latter two are responsible for successful Tzolkin, less known Sheepland or even a new great game Voyages of Marco Polo. But back to this Bazaar for the heroes, who was published by Cranio Creations in 2014 and presented at Spiel 2014 in Essen. Author of illustrations is this time Valentina Moscone.

But in a box showing the alley business, it is not so much components and you might fear for a moment, if this could be enough to supply all heroes, who stop by. There are mostly cardboard components, which include nine cave tiles (plus one entrance), but also two figures – accountant and ogre. Then it is all about tokens (favors, coins, dragons and exits) and wooden thingies. We find dealers in five colors targeted on players and also a pile of cubes in the same shades. Main component would be hero cards and also their equipment, which together make up one hundred (30 and 77 cards). Then, we have to mention only one business card and five spells. 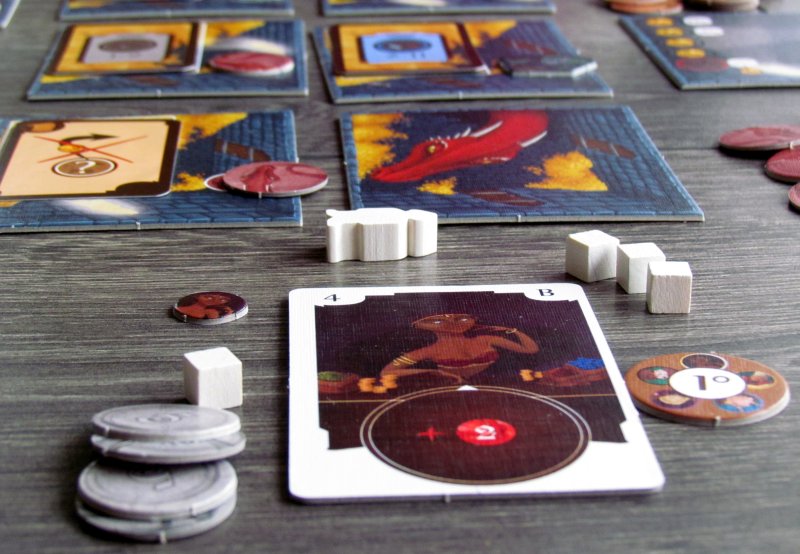 It is clear, that start of every game needs preparation of a proper dungeon, composed of nine pieces and one entry point. Each of the rooms has a door, which can be either opened or closed. Most of the tiles get either random token of little dragon (only one of them really is a dragon, fulfilling wishes) or giant / accountant pawn. Rooms are also filled with randomly assigned equipment cards (one random from each of the six species together with two spells).

Each player chooses a color and gets merchant and chooses one of his abilities (one side of card), that can be used in the game. Then, he also takes all the cubes representing goblins in his color and one trader. At the beginning, players also receive equity in the form of twenty gold and one favor token. Besides the board, they will need to prepare equipment decks (broken down by type and shuffled) and heroes (three piles by level).

At the beginning of each round, players must first identify heroes, who arrive into dungeon. Position of the entrance varies for each season (three in the game), based on a randomly drawn card. All the waiting fighters then have some gold coins in their pockets, which they could spend on a player’s stall. 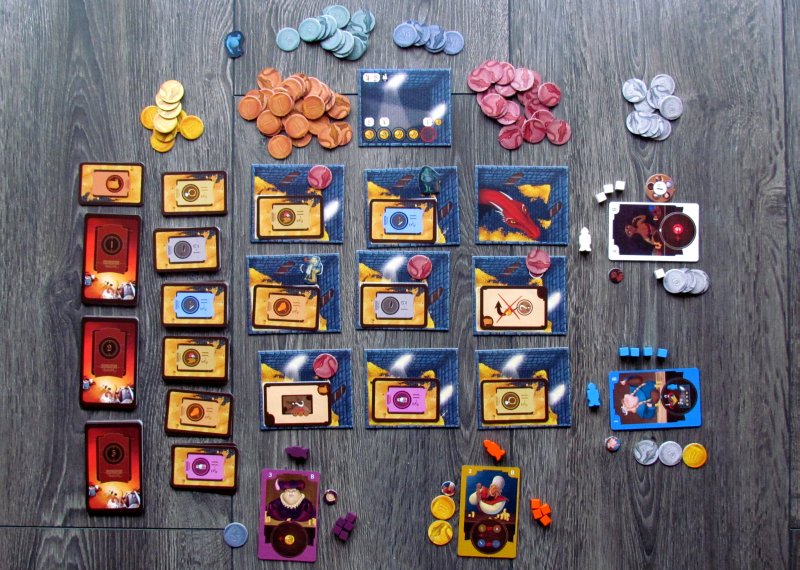 Players then try to bribe dragon to enable them to become the first player. Only then, players can finally begin to actively fight for their earnings. Each can perform three of the seven actions. Menu comprises from classic motion with seller pawn, but also possibility to leave one goblin behind in room (= cube), open / close doors, but also collect different tokens lying in the room.

Whoever finds the little dragon and takes him home to the dragon’s lair, gets a reward in form of favor and three coins. However, players in the context of his actions, can also visit one of the two figures – accounting for a profit of a few coins or hire an ogre and put him into the room of his choice. Heroes will be certainly not happy, when they encounter him.

Only when all players decide to leave the cave without further actions, round ends. This moment can can to some of them still some financial reward. Namely to those, who renounced continuation of the round sooner. 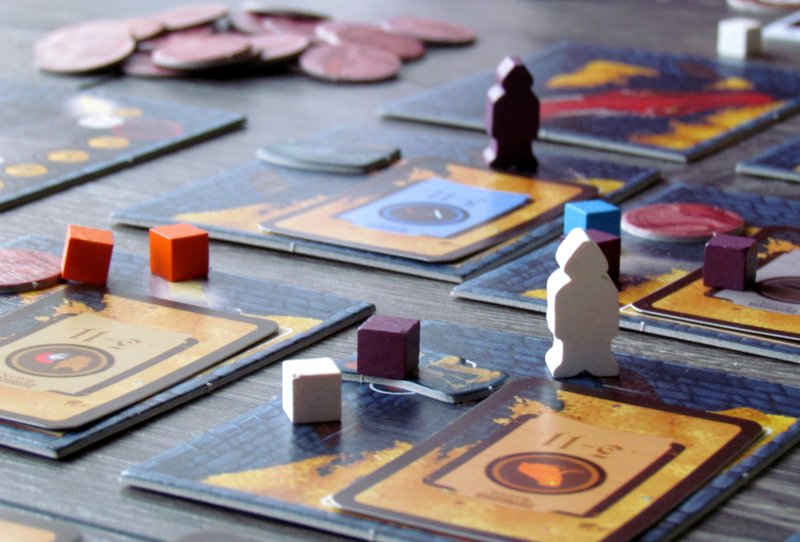 Evaluation is simple. Players simply count representation of goblins in individual rooms, and whoever has the most cubes in place, will get reward (finance or card) of the site. This is also the right moment, when heroes came to the stalls and began picking. All adventurers have deep pockets, so they choose by price. But everyone has their own preference indicated on the card and looks according to it in the first place. Players (traders) are paid ducats from their cards.

Then, it is time to prepare everything for the next round. After playing third season of hero visits and players aggregate their hoarded gold coins. Richest of them is the winner and successful businessman.

Dungeon Bazaar offers endless flow of heroes. They may have heard fairy tale about a princess or gold, but every one was fooled. Never trust a dragon. It’s a clever creature, who does not care about any princesses. He just wants to get his share of the gold. And therefore, he entered into an agreement with merchants, who will sell unusable weapons to visitors. Dragon then has no trouble to fry them with his fiery breath and business can continue. 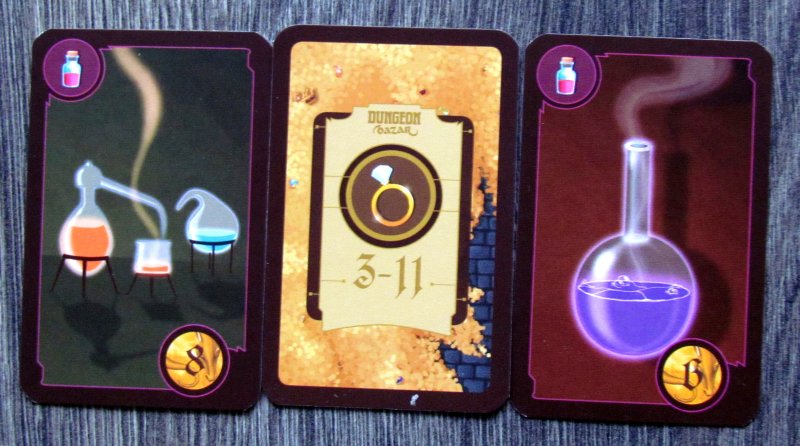 Now theme of the game is one of the major positives. But unfortunately, with ease comes also luck and to a large extent. Players will be commanded by fortune and decide on their success, because item offer is secret. It is therefore not possible to plan best locations to control, even though identity of visitors camped in front of the cave is known to all participants.

Game was a big disappointment for many of our testers. There were even a few, who have enjoyed it for some time, but their experience was mostly dominated by frustration over the randomness and stillborn rules. These are also the two main complaints, but when you play, they are gaining intensity. Unfortunately, even the gameplay itself is not brilliant, because topic is certainly not properly utilized. As a result, players can only interpret cubes of orcs, trying to gain dominance over the room.

Game takes almost an hour to copmlete, but somehow drags. While there is enough action, it is not so interesting to keep attention of players. Ultimately, it is just a matter of having the most blocks at the appropriate places, and everything else will somehow happen. Although you can play with two, which is good news for a while, but fewer competitors means less fun (and a lot of space on the board). 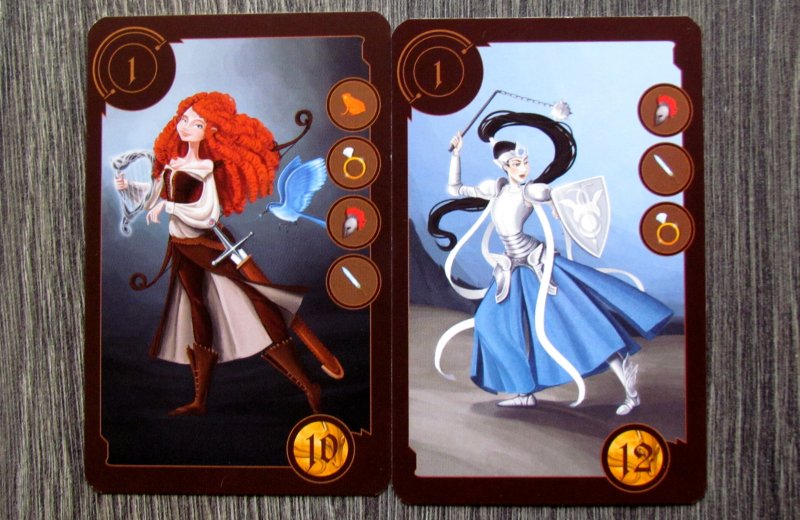 Processing creates difficulties. They are encountered especially at the beginning, when rear of the deck had an error. Fortunately, publishers have faced this issue and are sending new deck free of charge to all owners of defective versions.

Dungeon Bazar is still otherwise not very interesting game, that will appeal with a humorous theme and concept of rulebook. But the gameplay itself nor mechanisms are not interesting. There is not really anything, that should made you want to buy the game. And because of that, Dungeon Bazar will be a place with dungeon on the cover, where dust will fall more and more..